David Williams-Ellis is one of the world’s leading figurative sculptors, whose unique life size, portrait, bird and animal sculptures are cast in bronze, silver and glass.

David’s work has earned him international recognition and acclaim. He has worked on a number of prestigious commissions, both private and public, and his work is exhibited and collected worldwide.

Best known for his representations of the human form, David works primarily in clay and casts in bronze and in recent years, silver and glass. Drawing on classical training in Italy and the romanticism of Rodin and Bourdelle, whilst incorporating a contemporary feel, his sculptures are noted for their balance and poise.

David Williams-Ellis started sculpting as a child at school in England. He attributes his early start in his career to a helpful teacher who “was a painter by practice, but a sculptor by inclination”.   However, art also runs in his family; his parents were talented amateur artists, his sister Bronwyn Williams-Ellis is a successful ceramicist and his wife, Serena is a renowned interior designer.  His great uncle was Sir Clough Williams-Ellis who designed in the 1920s the Italianate village of Portmeirion which will be familiar to some of us of a certain age as being the location for the cult series of the 1960s, The Prisoner starring Patrick McGoohan – images of giant beach balls comes to mind.  Individual to the last, Sir Clough instructed that his ashes were used to make up a marine rocket which formed part of a New Year’s Eve firework display over the estuary at Portmeirion some twenty years after his death in 1978.

So creativity is in David’s blood.  His path to discover the media in which he likes to work is well documented and an interesting journey.  He eschewed the traditional route of going to Art School as he perceived that they were all going in a conceptual direction and no one was teaching the craft and traditional skills that he wanted to develop, so as an eighteenth birthday present he asked his parents to buy him a ticket to Italy.

There he sought out the renowned drawing teacher, Nerina Simi who in 1977 was already in her mid eighties, at her studio in Florence.  She initially turned him away but he was persistent and finally she allowed him in and she taught him to observe closely the details within people’s faces, the way their clothes hung and details within buildings.  Suffice it to say he returned to England with a clear understanding of the media in which he wanted to work.  Bronze allowed him to be more expressive than he could be by carving marble.

He explains that though bronze is his preferred material, he loves going beyond the traditional bronze sculpture and experiments with different patinations using various chemical reactions.   Recently he has been working with silver and it has taken him many years to understand that the surface has to be treated differently to that of bronze in order to achieve a successful sculpture.  He has enjoyed the challenge of its shininess and is pleased with the way he has worked the scales so that the fish flashes in the light and seems so real that it’s on the verge of hurtling and wriggling out of ones arms.

His silver salmon is one of his most successful works.  He likes to work from life which in this case is dead wild salmon.  Hence his increased waist line from he and his family having to consume numerous fish cakes for weeks on end so as not to waste the wild salmon and to justify the huge bill from his local fishmonger.

When asked what his definition of a great sculpture is, he replies. ‘People desire sculpture that they can relate to.  Many artworks miss the communication necessary to create the excitement needed to make the sculpture a reason for being where it is.  It has to visually excite, fill the site with its form and make you wan to return.  A sculpture, or any great work of art for that matter, should offer something different and thought provoking every time you look at it.’

The Vintage Magazine is very excited to have ‘discovered’ David Williams-Ellis although he has been a successful sculpture for many years and we are delighted to bring to our readers’ attention this Silver Salmon Sculpture which captures the power and beauty of this extraordinary fish and makes a stunning centre-piece for any dining table.  It is one of a limited edition of just nine and is life-size at approximately 25 inches long and weighs around 8 kg, and each one varies slightly according to the casting.

This magnificent sculpture is priced at £25,000, and if you are interested in it, I can arrange an early viewing, so please contact Robert Jarman on: 01962 793134 or
robertjarman@thevintagemagazine.com 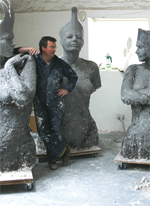