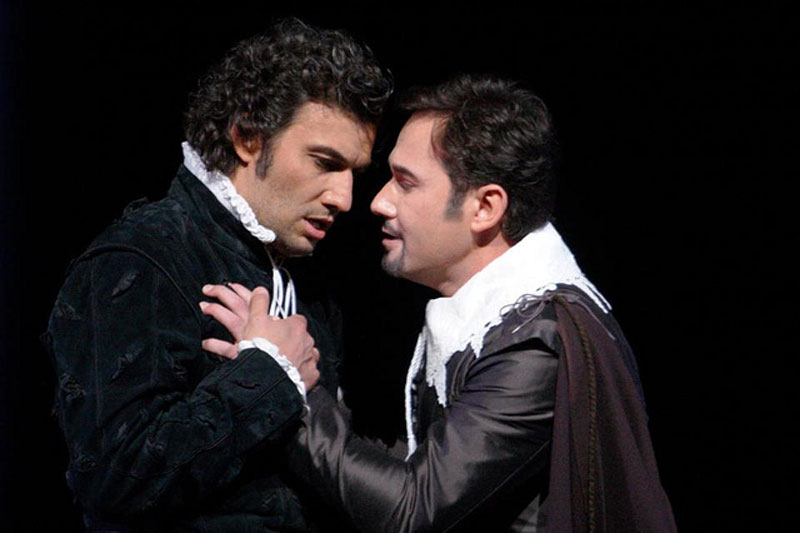 Don Carlo had a rather chequered career to start with. It was written for the Paris Opera in five acts with a ballet scene, which was the popular tradition, with a French libretto.  It is based on the play by Schiller, which was of course written in German, and when first performed in Modena after its Parisian debut, it was sung in Italian.  The Italians and many more recent audiences have felt that it is too long, and so Verdi shortened it, by removing most of the first act and the ballet. This makes it difficult to make sense of the plot, so others have cut out later parts.

The Royal Opera  production gives us the full five acts, though without the ballet, which seems a very satisfactory compromise, but makes for a long opera, starting at 6pm and finishing at 10.30.  However with these performers and the orchestra under Sir Antonio Pappano, it went by in a flash!

A summary of the plot :

Spain has been at war with France, and a condition of the peace treaty is that King Philip of Spain’s son and heir, Don Carlo, should marry the French Princess Elizabeth de Valois.

Don Carlo secretly meets Elizabeth at Fontainebleau and they fall in love, but then King Philip decides that it would be even more peaceful if he were to marry Elizabeth.  She  agrees to this when persuaded that it will bring peace for her country as well as Spain as quickly as possible.

Don Carlo is of course distraught, so his best friend, Rodrigo tries to interest him in going to Flanders to help the oppressed people there, who are under Spanish rule and more particularly having a very hard time with the Spanish Inquisition.

During the rest of the opera, Don Carlo tries to take the part of the Flemish, is arrested and sent to jail, for threatening his father, who is determined that he will not go to Flanders, Rodrigo tries to help, and in Act 4 he is killed in Carlo’s prison as he has been found with incriminating letters, but gives his life to save his friend Don Carlo.

When Don Carlo is released he has a last meeting with Elizabeth to say goodbye, but they are found by the king and the Grand Inquisitor and the guards go to seize Don Carlo, who in this version is stabbed and then taken into the cloister behind by his grandfather Carlos 5th, presumably appearing as a ghost, but the ending is rather ambiguous,  as to whether this is indeed the grandfather or a monk in disguise, and if Don Carlos is saved.  In Schiller’s play he is handed over to the Spanish Inquisition, which was no doubt a much worse fate.

There are sub plots  as well, concerning the Inquisition, whose grand Inquisitor encourages King Philip to do away with his son, and Princess Eboli, who is also in love with Don Carlo, and tries to persuade the king that Elizabeth has been unfaithful to him.

In real life apparently Don Carlo was deeply unpleasant, like his father, and also epileptic, which is alluded to in a scene with Elizabeth when he collapses and appears to lose consciousness.

Our present Don Carlo was played as a dashing and sensitive young man, with Jonas Kaufmann using every ounce of his musicality.  He has a particularly wonderful pianissimo and this was matched expertly by the orchestra, who were always perfectly in tune with the singers.

Mariusz Kwiecien was a very persuasive Rodrigo, and in fine voice.  His duet with  Don Carlo when they swear undying friendship was most moving.

The star of the show was Anja Harteros, whose voice was fabulous and who gave Elizabeth plenty of character, and gave her an interesting personality.  She has been seen as one of Verdi’s less colourful heroines, but Anja Harteros  made her shine.  Rather than just giving up on her love and marrying the king, she made us feel that she was doing her duty to her subjects and to God, and that in the end was more important to her, though it broke her heart.

The music throughout the opera is sublime, with some lovely arias for the main characters, and a recurring friendship theme for Carlo and Rodrigo, which was beautifully treated by the singers and orchestra.

Altogether it was a memorable evening, and I fully agree with the critic in the Times, who awarded the production five stars.