Christine Rice as Ariadne in The Minotaur

John Tomlinson was playing the Minotaur, reprising the role which he first sang in the 2008 performances of the opera, and also marking the 35th anniversary of his debut at Covent Garden.

Ariadne was sung by Christine Rice

Theseus was sung by Johan Reuter

The opera is in two parts, and has an exciting score with much use of percussion, needing extra players in the side balconies. The singing was excellent, as would be expected from the starry cast, and the conductor brought the best out of the orchestra, in what must be a difficult score, especially as he had to stand in for Antonio Pappano, the Opera House’s principal conductor, who was originally scheduled to conduct.

During the first half the scene is set and the ship arrives carrying its cargo of innocents and Theseus, who is determined to slay the Minotaur.  Ariadne meets up with him and is equally determined to persuade him to take her away from her dysfunctional family, a father who demands a ship load of sacrifices each year, a mother who had an affair with a bull, though it was really a God in disguise, and gave birth to a half bull/half human, who has to be kept locked up in a labyrinth.  She certainly had good reason to look for a way out!  Towards the end of the first half comes the scene where the sacrifices are killed by the Minotaur, which was very skilfully portrayed with little actual depiction of violence, but leaving the audience in no doubt that they had been horribly murdered. then the Keres, winged creatures who feed on the dead, appeared, a vivid and arresting scene, wonderfully sung and acted especially by the leading Ker, Elisabeth Meister, who was delightfully malevolent and sang brilliantly.

As an aside, we were afforded some unintentional entertainment during these scenes.  We were sitting in the orchestra stalls, and were alarmed during the scene of sacrificial slaying by a man in the row behind who began to snore extremely loudly!  How he managed to get to sleep I have no idea, as the music and percussion were going full pelt and it was, to say the least, an exciting scene.  Gladly someone prodded him quite quickly and he stopped.  About ten minutes later a woman two rows in front evidently found it all too much and started screaming hysterically that she couldn’t take it, which was a more appropriate reaction but still quite distracting!  Neither of these members of the audience returned after the interval.

The second half concerns Theseus being given his ball of twine and going down into the labyrinth to slay the beast, which he does after some fighting, largely because he also took with him a large knife, the Minotaur never having encountered weapons or pain being thus at a disadvantage.  John Tomlinson was excellent as usual, and gave a sympathetic rendering of the beast, being locked away from the world and in a way as much of a victim of circumstance as the innocents he is expected to devour each year.  Ariadne also becomes a victim of course as though she leaves with Theseus, he abandons her on his way home, not ever having intended to keep his half of the bargain, thought this is not depicted in the opera.

Visually the evening was a treat, with clever sets, the scenes divided by the use of a backdrop of the sea, and the labyrinth being depicted as a walled prison for the beast, which is reached down a ladder, which worked really well.  The chorus sang from the top of the walls and wore classical Greek masks, a nice touch.

Altogether an evening of great value, as long as you are willing to see a modern opera, it is noticeable that the price was about a third that of a popular Verdi evening!

We also had dinner in the Balconies Restaurant, where you have two courses before the start and dessert and coffee in the interval. The service is seamless and the food very good.  I also love being able to sit down again in the interval without having to queue for drinks, and there is a superb view of the rest of the entertaining space, including the Amphitheatre Bar, which looks like a picture suspended in mid-air.  Dinner is also served in the Amphitheatre Restaurant and sandwiches and light supper in the foyer area, a good alternative if you don’t want the expense of  a full dinner.

The final treat of the evening came at the end of the opera, when a cake was wheeled onto the stage and Harrison Birtwhistle, his librettist, David Harsent,  Antonio Pappano and the director, Stephen Langridge all came on to congratulate John Tomlinson on his 35 years  of singing there.  He even ate a bit of the cake! 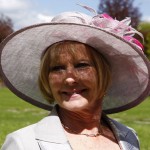