The fine three train triple fusee movement having verge escapement with short brass bob pendulum and knife edge suspension with a nest of eight bells being struck each quarter by eight brass headed hammers and sounding the hours upon a further and larger bell via the rack and snail striking system and having pull repeat function with profusely engraved floral backplate with large open cartouche signed for the maker, James Smith London with simple yet engraved apron to the backplate. 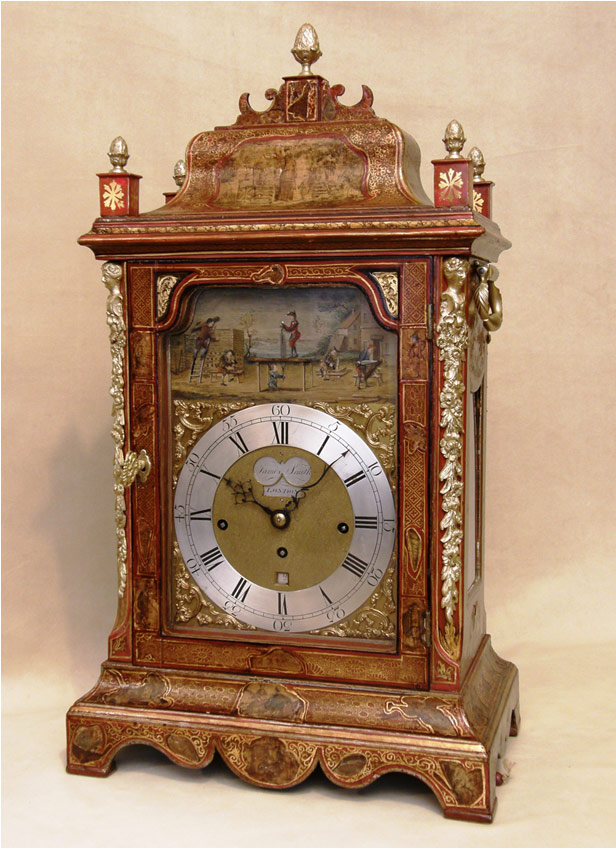 The impressive ogee topped brass dial with matted centre and applied chased and cast brass corner spandrels with applied silvered engraved chapter ring for hours and minutes with calendar aperture above VI being signed to the reverse mounted silvered cartouche, James Smith London (below XII) with finely cut and blued steel hands, having large painted country scene to the ogee bordered top, unusually with six automaton figures, five of which operate directly from the escapement whilst the sixth being a thatcher climbing a ladder, stopping and climbing down again via an extended contrate arbor and bridge with rotating cam, allowing the whole process to run at a much slower speed taking some two minutes to complete with a ten second stop at both top and bottom, whilst the other five craftsmen carry out their eternal work of carpentry.

The bold red and gilt lacquer case having inverted bell top with inset paintings of Chinese, oriental and other figures in traditional costume from around the world with free roaming beasts of leopards and wolves to the sides.  Having canted corners mounted by brass caryatid with sound frets to the glazed ogee front door, having glazed panels to the sides with carrying handles above, the top mounted by five blocks (four of which are replaced) and five brass finials.