It is generally acknowledged that some of the very finest Chess Sets ever made, were those made by Jaques of London and of these, the ‘crème de la crème’, and therefore very rare, are the Deluxe Club Chess sets containing a set of Staunton Ivory Chessmen.  In fact we can confidently state that to the best of our knowledge there is not another one of the same quality for sale anywhere in the world at present.  Our assessment of its rarity and value is supported by the Certificate of Authenticity issued by Joe Jaques, of Jaques of London (see this certificate, reproduced at the end of this presentation)

According to an advertisement in the Illustrated London News dated September 8, 1849, the first Jaques Staunton pattern sets were available in the finest African ivory (5 guineas)”. We can date this set to circa 1852 so it is a rare survivor and in excellent condition, considering its age. 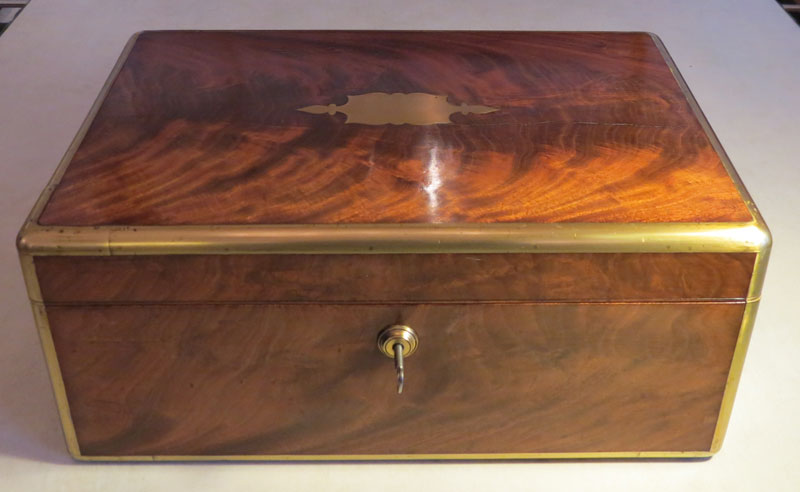 This superb set of vintage Staunton Chessmen is contained within a Spanish Mahogany box with brass bound round edges, brass campaign handles and brass inlaid cartouche to lid and lock signed, BRAMAH with its original key. 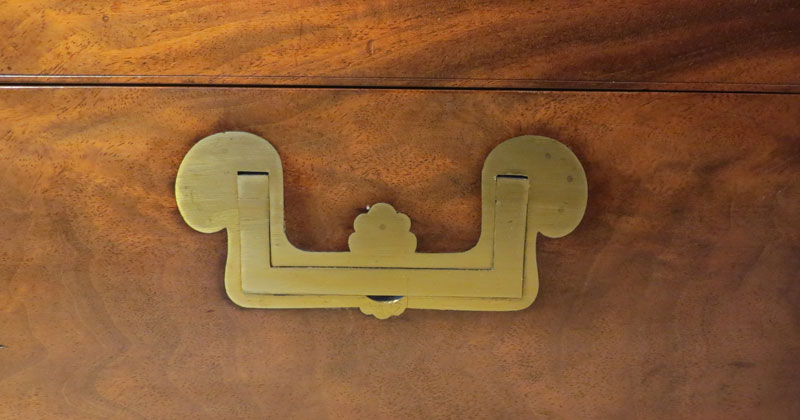 The interior is lined with dark blue velvet and each set of chessmen are fitted into two ‘lift-out’ velvet plush lined trays. 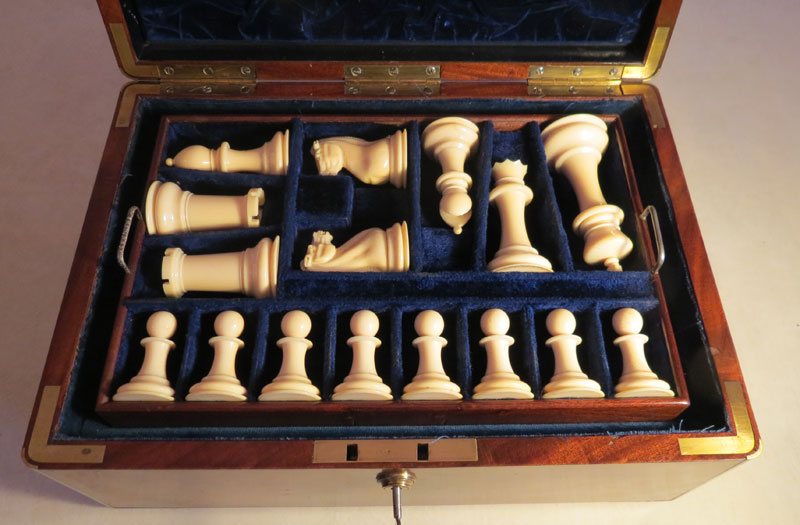 The quality of this box is such that it was probably made by one of the leading retailers in London, such as Aspreys. 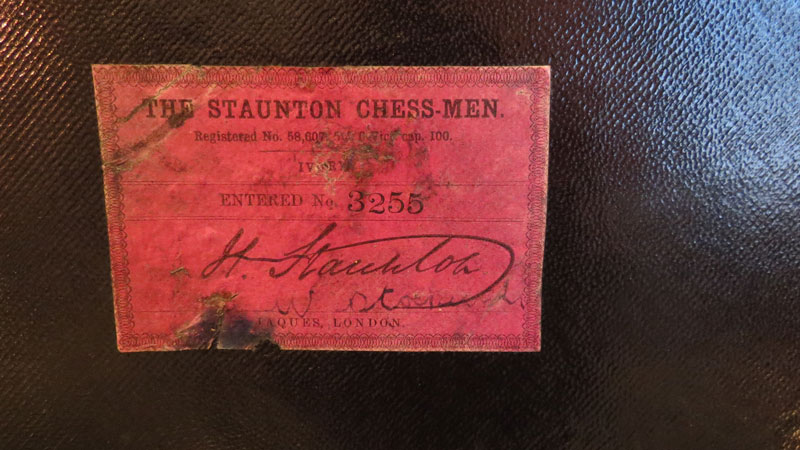 Affixed to the inside of the leather lined lid is a red label which reads as follows:-

N.B. the H. Staunton signature at this date is a facsimile and not hand signed.

The Jaques Staunton Chessmen conform to all the features one would expect to find on pieces of this date which are as follows:-

The King’s crosses are removable.

The knights are in two pieces so that the head and the base are screwed together. 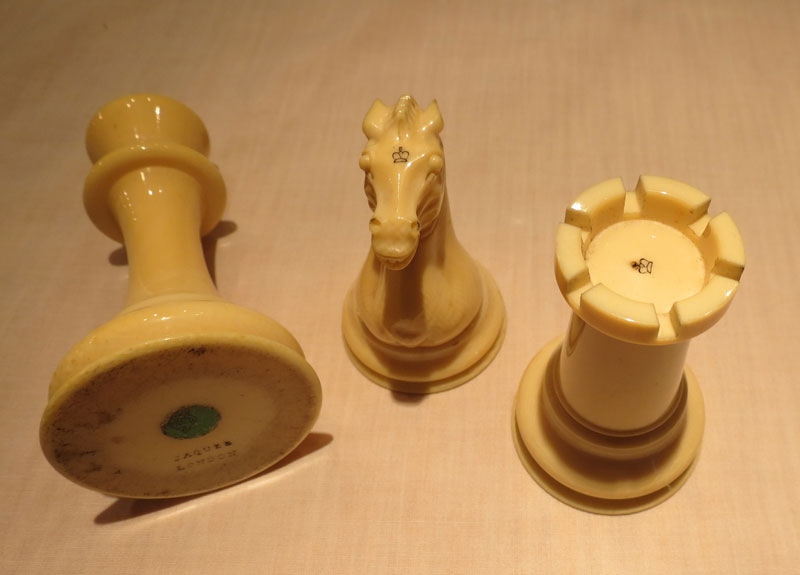 The symbol of a king’s crown is affixed to the summits of the kingside rooks and knights.    (Jacques were the first chess set manufacturer to do this) 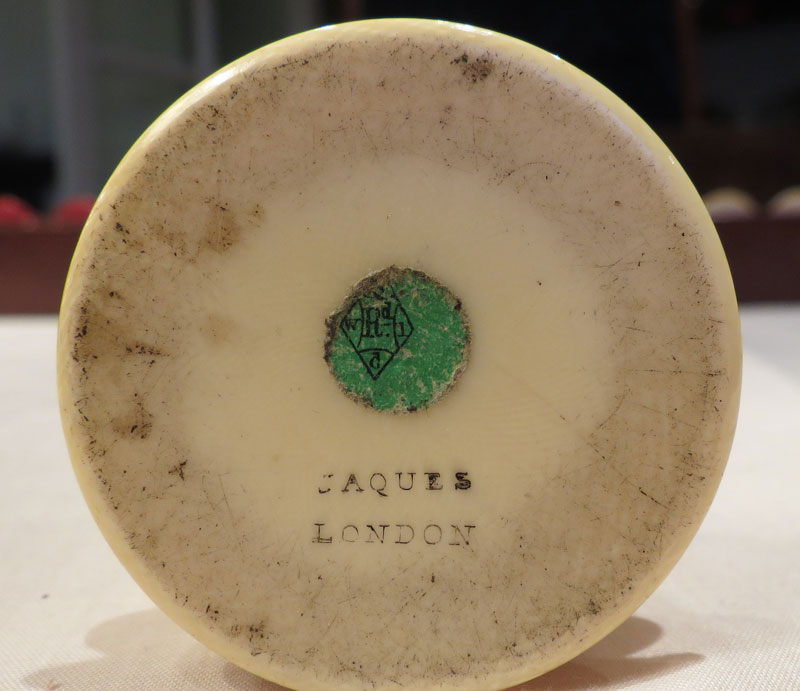 Each chessman in a Jaques set, sold during the first three years of production had a small green paper disc affixed to the base of the pieces. (The majority of these pieces still have their green label)

This disc bore a registration mark consisting of a small diamond which identified the day, month and year the design was registered, the class and a parcel number.

The height of the King: 4⅜  inches

Dimensions of mahogany box: 14 x 10 x 6 inches
In conclusion it is worth mentioning that there is an international network of chess collectors who tend to pass sets between themselves so the best sets are rarely available on the open market and are rarely seen at auction.

For more information as to how to view this exceptional Chess Set, please contact Robert Jarman at info@thevintagemagazine.com or telephone +00 44 (0) 1962 793134

N.B. This rare Chess Set has been appraised by Jaques of London and Mr. Joe Jaques has issued this Certificate of Authenticity and Valuation :- 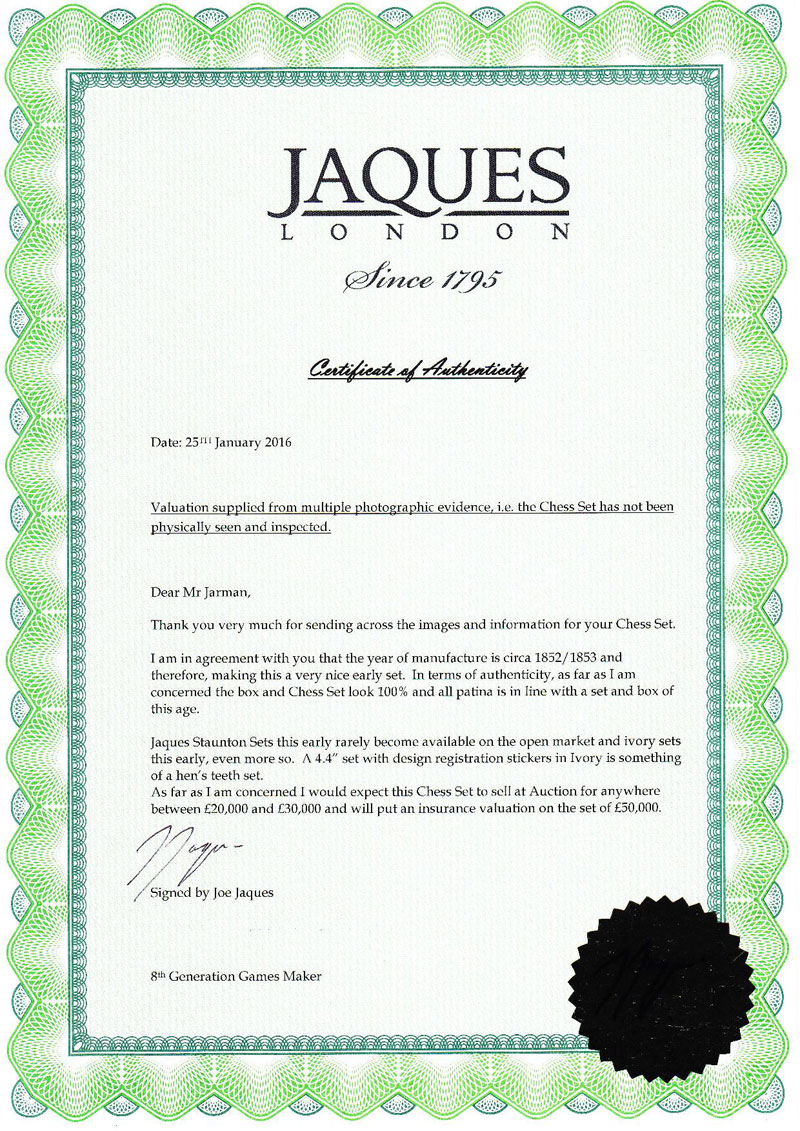 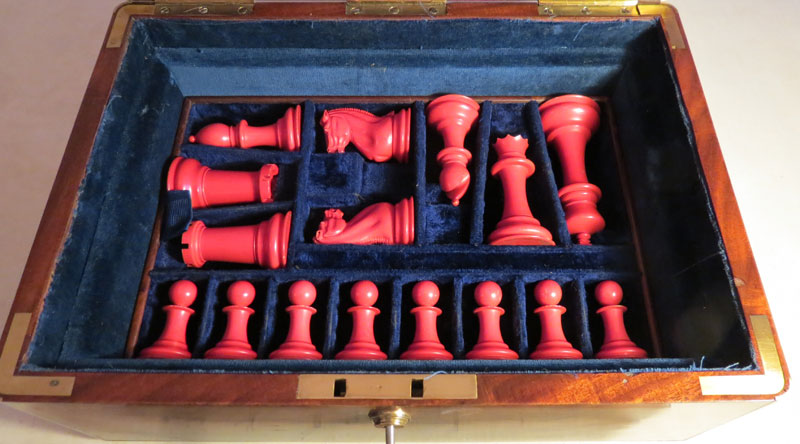 Chrissy Jarman studied at Southampton University where she gained a degree in Fine Art Valuation and worked for 16 years at Gerald Marsh Antique Clocks in Winchester, now known as Carter Marsh.

Following her departure from Carter Marsh she has been instrumental in the launch of The Vintage Magazine and the design of its website.  As well as being a contributing author she is the Features Editor of the magazine with special responsibility for Arts and Culture.

Christine attends many of the most important international Fine Art and Antique Fairs, including Masterpiece, and Frieze.