The trend for “cross-collecting” (see my previous piece on Masterpiece) continues unabated, and as should be expected of the talented crew at Frieze, the Frieze Masters fair gives us a masterclass. For those interested in tracking differences between art fairs, Frieze Masters selection is across history, but in the main limited to paintings and works of art and excluding furniture and jewellery. Of course go far enough back and the differences between art and antiques starts to blur. 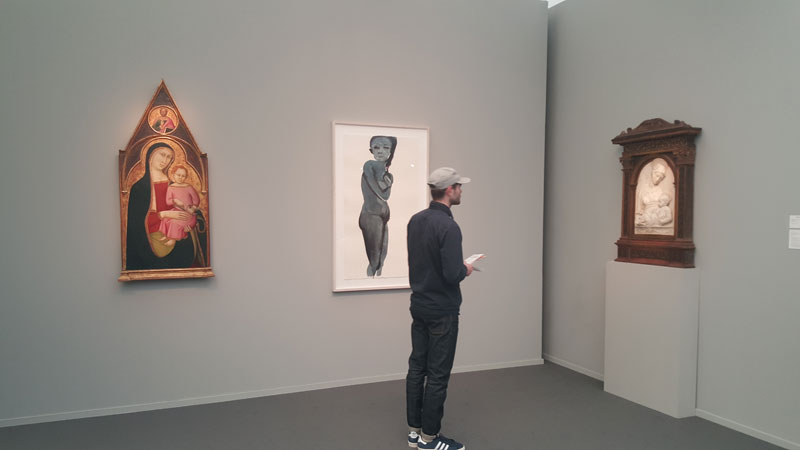 The cultural Hoover that is Frieze Masters doesn’t just put contemporary dealers next to old master dealers but goes one step further, positively encouraging the individual stands to juxtapose works as if in counterpoint. The most visually arresting example is on the Hauser and Wirth / Moretti stand where works by Marlene Dumas (b.1953) and Luca di Tommè (Siena active 1356-1389) hang side by side (see above). Other examples include Bridget Riley’s abstract paintings adorning the wall of a stand with classical heads arranged on pedestals from Tomasso Brothers Fine Art.

The curatorial bent is restrained and fortunately does not overwhelm the object. It would be easy to pick out the usual Picasso paintings – which perhaps represent the Hollywood stars of the fair and other “masterpieces” with the multi-million dollar tag, but to do that is to miss the strong silent qualities of this fair.

Why not instead, pick out a book from Les Enluminures stand?  Exquisite works of art, these illuminated books from the 15th century are dripping with wonder. Preserved over the passage of time some, have been held in one family for generations marked with birthdays through the centuries. Things of huge significance financially and politically when made, time has only added to their aura. Some are priced at around USD200,000 – real value in a world where even an ear by Picasso would cost more – but arguably be less interesting. 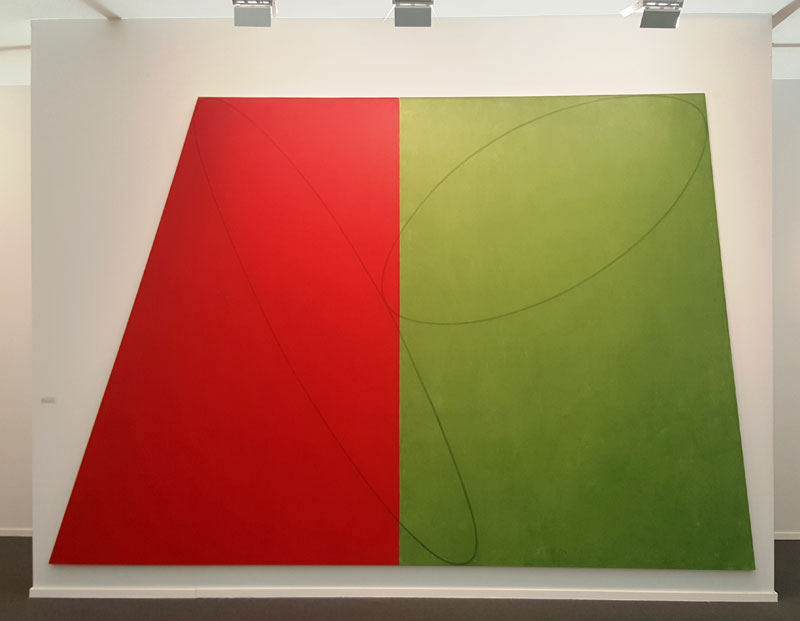 Or take a chair and sit in front of Robert Mangold (American b. 1937) beautiful large scale (284 x 426cm) piece on the stand of Galleria Elvira Gonzalez – you will not find any more elegant or sophisticated a piece of American modern painting in Europe. Brought to London by a gallery from Madrid 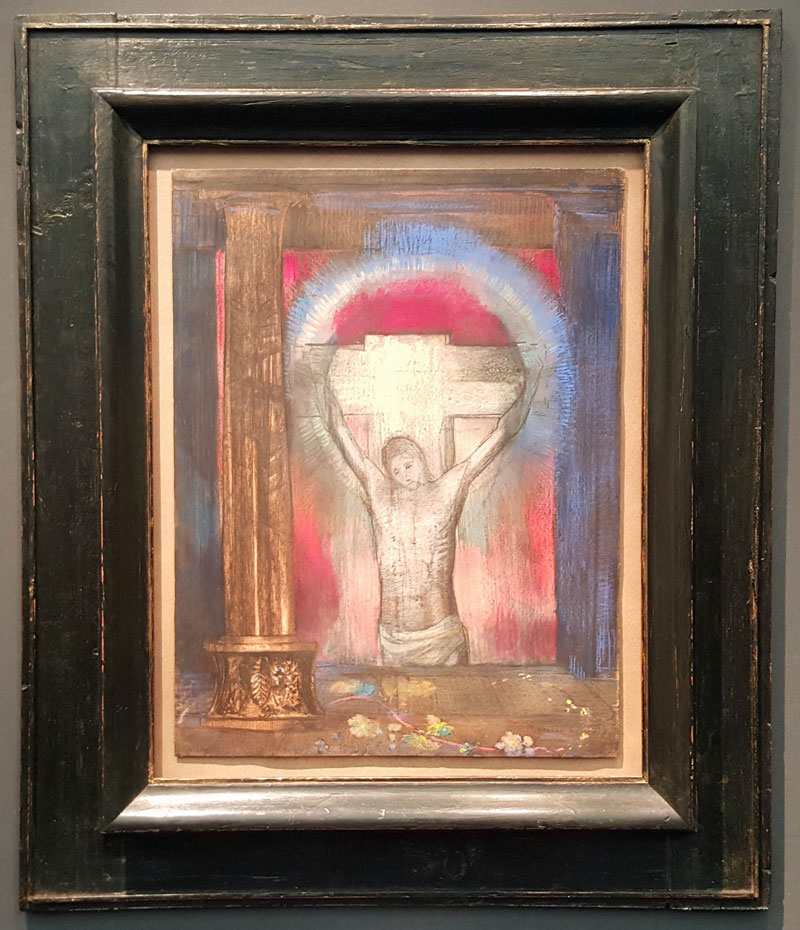 Finally in amongst the noise remember the drawings dealers – some of whom have the most exquisite and remarkable pieces. My choice is the Odilon Redon (1840 – 1916) “Crucifixion c.1900” just 49 x 37cm on Stephen Ongpin’s stand. A rare pastel piece made by the master of the Symbolist movement. The piece has spent much of its life in the Far East but is now available to see and for someone fortunate – to own.

But what about the main event – the fair that the auction houses set their sales around, the cornerstone of Frieze Week? The event that makes London the epicentre of the art world for a week; the fair everyone loves to hate, laugh at or eulogize.

If you visit both Frieze Masters and Frieze the immediate difference is the light. Frieze Masters has a wonderful translucent tent that creates a warm ambient light reminiscent of a spring day. Of course this is not far from the environment that most of the artists exhibited there would have created their work in. At Frieze itself everything is literally and metaphorically cooler. Electric light is de rigeur and that light is on the cool blue side.

The second thing at Frieze is the average age of attendees – so many youngsters and hipsters at Frieze . All of them paying an obligatory £5 fee to deposit bags in the cloakroom (payable by card only – in our post-modern world cash is verboten). The cloakroom is free at Frieze Masters.

There is of course the ubiquitous large inflatable cartoon character, a hyper realist female  nude sculpture tittilatingly risqué and  a man (real this time – but awfully tired I should think) standing stock still with an iron cage over his head surrounded by broken pots. But more generally this year a lack of genitalia on display indicating a more restrained and sober economic environment.

And of course there is the hype. The press office highlights the large American dealers completing multi-million dollar transactions and selling out within the first 10 minutes of the fair’s opening  as if the fair is some sort of supermarket sweep. Damien Hirst allegedly (one can never be certain) claiming the top spot for most expensive work sold at Frieze with his imaginative switch from painted circles to painted rectangles.

In spite of all of this the fair is actually really rather good. It is engaging, representative, and refreshingly unjudgmental. Somehow within its expanded coverage it has reached a critical mass where there is enough work illustrating the groundswell of art from which the  hyper-dealers with their big tickets emerge. 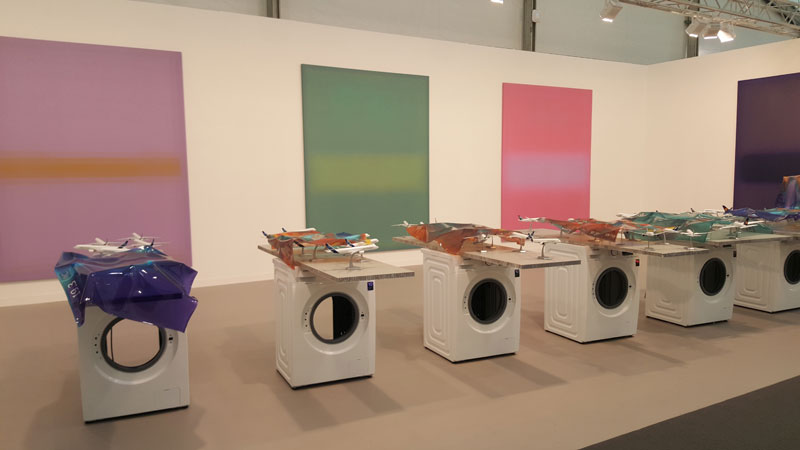