Almost twenty years ago, I posted a letter which marked a change of course in my career. The handwritten letter, in my trademark brown ink, was to The Prince of Wales, asking him if he would consider making signed lithographs from his beautiful watercolours which could be sold in aid of his charities. I had seen them in a Sunday colour supplement and suggested that they might be made into lithographs under the guidance of Stanley Jones, the celebrated printmaker who had previously worked with Henry Moore for thirty years, and with Elizabeth Frink, Hockney, Kitaj, Ruskin Spear and Carel Weight among others. The two latter artists were very supportive of the idea – we had been working together for a few years.

I heard nothing for some months – a good sign, I thought, not a “no”. Then just before Christmas in 1989, came a call from St James’ Palace from Richard Aylard, then Private Secretary to the Prince of Wales. They were very keen to progress the idea of signed lithographs, and would I like to come in to discuss this?

A week later I met Richard and an assistant and showed them the portfolio of artists’ prints the company had produced. I was greatly surprised and honoured to be offered the opportunity to publish some of the Prince’s watercolours as limited editions just as I had set out in my letter. Richard asked me if I would like to meet the artist and a date was fixed for the following week. He informed me that there was to be an exhibition of the Prince’s work in Urbino, Italy, at the home where Raphael was born, planned for May 1990 and a catalogue was needed, hardback, in Italian and English – could we produce this? It was clear an affirmative answer was required which I nervously gave them.

My first meeting with the Prince took place in a beautiful drawing room at St James’ Palace. I was delighted that some sixty watercolours had been sent from a number of different places and laid out on a table for me to choose which were to be his first lithographs. The Prince entered the room and we chatted at length about the proposed images, Stanley Jones and his work, the charity, the provenance, the paper we would use (Somerset, with a special watermark of the feathers badge insignia). The meeting was memorable, the Prince loved the idea, a book of his watercolours was about to be published, and he seemed genuinely surprised at the interest in his watercolours which he had then been painting for some twenty years.

The first two images were chosen, of Wensleydale in Yorkshire which he called in his book ‘God’s own country’. His staff kindly sent around twenty original watercolours to my home which I then drove to Cambridge to give to Stanley Jones. After a few weeks, the first proof was ready, Stanley having done the delicate tracings, and then making the twelve plates from which the images were printed on Curwen Studio’s 1940’s printing press. Once this was ready Stanley and I went to meet the Prince again, this time at Highgrove, the Prince’s beautiful Gloucestershire Home.

I was surprised at its homeliness and comfort. The Prince fetched his watercolour palate and mixed the exact colours he uses regularly; Stanley Jones was then able to revise the image. A few weeks later we brought an amended proof to Highgrove on which the Prince wrote – in the time honoured tradition of printing – “good to pull”.

We started working with an excellent public relations specialist to publicise the work. The Times ran an article about this being something of a coup for a small publisher as did other publications, TV and radio. Sales ensued; the works, signed by the Prince were deemed to be good investments.

An edition of Windsor Castle followed the Yorkshire scenes. This had been painted just before a thunder storm when a great shaft of yellow light flooded the castle through the black skies. The Prince was unable to complete the painting because the heavens opened – other works in his collection are scarred with raindrops. This edition sold very quickly, then came another of Sandringham, and while attending a proofing session at Sandringham, we chose the next in the series, Balmoral.

My contract was for six editions of 295, and as we reached the fifth, it occurred to me that it would be fun to do three editions of 100 each rather than 295 of one. The three chosen were classics – again but this time bathed in a luminous pink sky, and the enigmatic Hong Kong from HMY Britannia which was launched in 1997 to coincide with the handover of Hong Kong to China and the final voyage of the much loved Royal Yacht. Again, all three were very sought after, with prices of some of them rising from around £2,500 to £12,000-£15,000 a few years later.

During the time these were produced, the Royal Family went through some very turbulent years. However more lithographs were produced: scenes of Highgrove, Greece and some of Scottish landscapes which I chose with the head of the print department from Sotheby’s. The Prince of Wales’s lithographshave developed a following among collectors and admirers of the Prince’s work. Beautifully presented in a lavish presentation box, the works are very covetable. The certificates of authenticity are signed by the Prince’s Private Secretary, currently Sir Michael Peat. Regularly appearing at charity auctions and from sales at the gallery, we estimate that over £4,000,000 has been raised to date. Sales have benefitted over a hundred charities which represent the Prince’s diverse interests; from international disaster appeals to supporting farmers affected by foot and mouth, architectural projects and many others. It was through our connection with this work that we were asked to launch and market lithographs by Nelson Mandela and had the privilege of meeting him too, both at his home in Johannesburg (where he called the Prince of Wales “a very fine fellow”) and on Robben Island at a dinner when he described his joy at drawing.

It has been an interesting result from one letter which, when posting it, I remember thinking 50:50 odds that I might receive a reply. 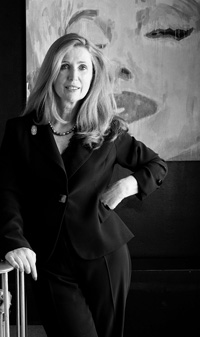