Light from the Middle East

This exhibition is fascinating and contains many really exciting works and the entrance is free.

The exhibition title, the curator’s statement and even the names of the exhibition sections are somewhat misleading and best ignored.    One supposes the diversity of the photographs led the curator to choose a short snappy exhibition title – it is not clear what ‘light’ refers to.  The ‘Middle East’ itself is a loose term, as the photographers come from North Africa to Central Asia, and many are based in Europe.  The curator’s statement that some of the photographs record but others show how photography can be deceptive, could in fact describe just about any photography exhibition.  The titles of the three sections – Recording, Reframing and Revisiting – are not particularly enlightening either, as the categories dissolve one into another.

What the exhibition does is introduce about 30 Middle Eastern photographers to a public largely unfamiliar with their work and, better still, it presents some extraordinary work, which is not just stimulating or stirring on a socio-political level (not surprising given the background of most of these countries) but exciting aesthetically and moving on a human level, especially as most of us are inured and somewhat desensitized to photographs of atrocities, killings, terrorist bombings etc. in various Middle Eastern countries. 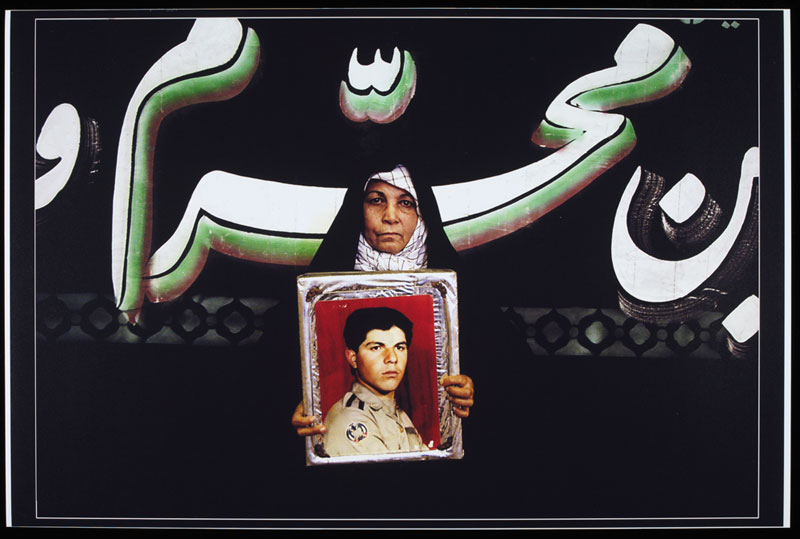 Newsha Tavakolian  – From the series Mothers of Martyrs, 2006.

For example, we are all used to seeing pictures of mothers holding up photographs of sons who have died after bomb blasts or shootings, but the Iranian Newsha Tavakolian’s photographs are of a different order. One shows an elderly burkha-clad woman, her face uncovered but almost expressionless, holding a large framed photograph of her young uniformed son; behind her a black billboard enlivened with large Arabic script shadowed in green, white and red (the colours of the Iranian flag); the woman’s black and white burkha echoes the black and white of the background; the bright red, with all its connotations of love but also carnage, of her son’s photograph offers a bold contrast to the monochromes.  In this series, Mothers of Martyrs (showing mothers whose sons had been killed decades before in the Iran-Iraq war of 1980-88), Tavakolian’s work makes the transition from photography as reportage to photography as art. 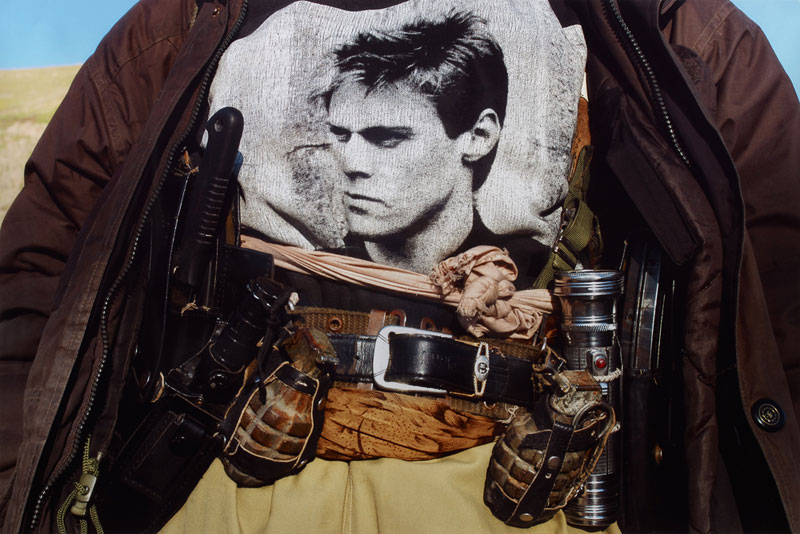 Another Iranian, Abbas Kowsari, who worked for ten leading Iranian newspapers, most of which are now banned from publishing, is currently picture editor for Shargh, a popular reformist title in Tehran.  In Halabche he presents a portrait within a portrait.  The photograph is tightly cropped to show just the chest of a peshmerga (a Kurdish fighter): his brown jacket is opened to reveal his waist hung with shiny metal hand-grenades, knives and handguns – in shocking contrast to his pale grey tee shirt, showing the healthy, clean-cut face of Canadian rock-singer and guitarist Bryan Adams.  The contrast reminds us that there are generations of young soldiers and freedom combatants who have been deprived of their youth – who, in a more stable environment, would be listening to rock music rather than to gunfire. 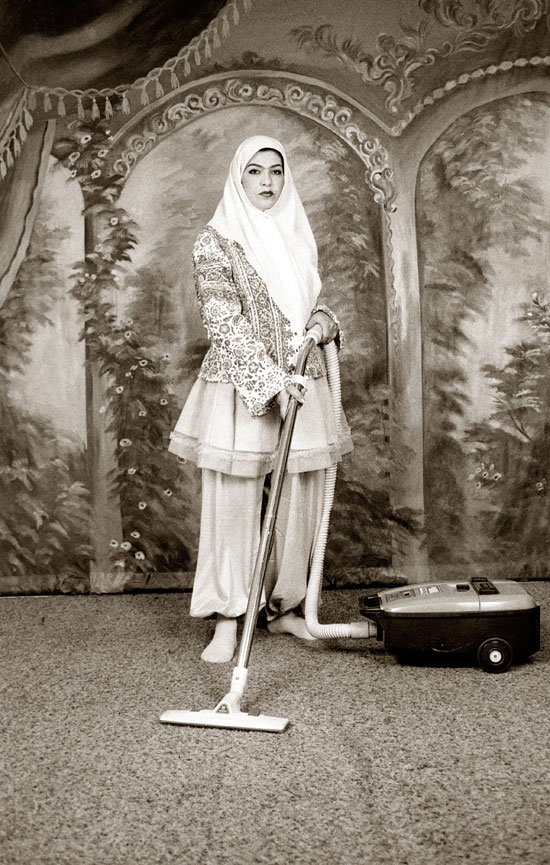 Many of us saw the striking, witty, colour photographs by Shadi Ghadirian, another Iranian woman photographer, at the Saatchi Gallery, each one showing a woman entirely covered in a burkha, her face replaced by a household object – an iron, a Marigold glove or a colander – underlining the mundane, passive, unimpowered roles to which Iranian women are so often condemned.  Here her Qajar series look at first glance like typical sepia studio portraits from the late Qajar period (late 19th century) i.e. women in traditional garb, standing stiffly in front of an unconvincing canvas backdrop of heavy drapes or grand fireplaces. But closer inspection shows that the artist has added some modern dissonances and anachronisms: here each woman stands incongruously with a mountain bike, newspaper, hoover or Pepsi can.  In these works, Ghadirian expresses the difficulties women face in Iran today – frustrated and torn between stultifying tradition and the ambivalent allurements of modernity and globalization. 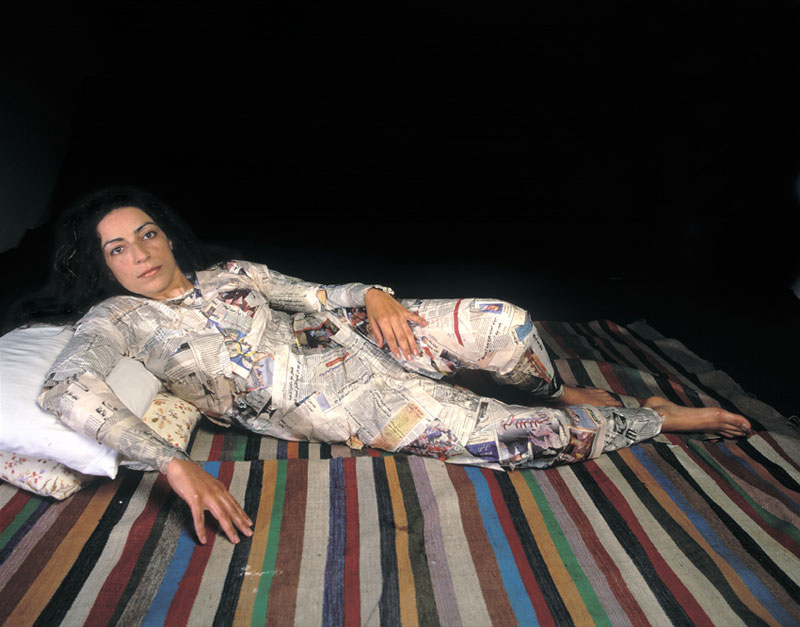 The Palestinian Raeda Saadeh (another woman photographer) also plays with witty contrast – a contrast of traditions and expectations.  In her photographs, videos and performances, Raeda Saadeh assumes various roles to explore issues of displacement, gender and identity, with particular reference to the Israeli-Palestinian conflict.  Who will make me real? recalls European paintings of reclining women and nudes (one thinks of Titian, Delacroix, Picasso etc), but here we have Raeda lying on a striped rug and pillow, not nude (of course) but wearing a top and pants made entirely of Palestinian newspaper cuttings.  As in so many of these photographs of women, she is fairly expressionless.  In the European tradition, she would have been portrayed either naked (as an object of erotic fantasy) or in sumptuous dress (as an object of admiration).  She is neither.  Moreover, what most of us would not understand, the cuttings report atrocities enacted in that war-torn part of the world.

In the course of a year, Hammam watched these remarkable scenes, got to know some of the soldiers and took around 70,000 photos, some of which, back in her Cairo home, she turned into artworks, juxtaposing graceful photos of the soldiers and protesters with evocative if incongruous images of mountains, glades and waterfalls.  In fact, before the mood turned violent, she gave copies of her photos to some of the young soldiers as gifts for their mothers.

In the very colourful Upekkha series, she transports the soldiers to vibrant fantasy settings: in one, two soldiers are in a tank but with blossom-laden trees and snow-capped mountains beyond; in another, two young soldiers, elegantly dressed in smart black, white and red military uniforms (the colours of the Egyptian flag) stand nonchalantly in a field of spring flowers (a visual pun on Arab spring?) with Alpine mountains beyond, one holding a tub of yoghurt, the other standing with his back to us, seeming to show off his clothing – like models for a fashion shoot or a TV advert for yoghurt.  Interestingly, her images of the bashful boy-soldiers provoked furious charges from some Egyptians that she made the soldiers look effeminate – an explosive allegation in Egypt’s testosterone-driven political scene.

Moroccan Hassan Hajjaj, who moved to London in 1975, has been a jack-of-all-trades since his childhood in Morocco: running a tea shop, working as a fashion stylist, opening a shop called Rap in Covent Garden, a club promoter, making and selling clothes, including fake Prada and Gucci tee shirts, and, more recently, hotel-owner.  In 2003, he opened a bar in Paris called Andy Wahloo, the name partly a tribute to Warhol and partly a pun on the Arabic for “I have nothing”.  Relatively late in life, he met London-based, Middle Eastern gallerist Rose Issa, who encouraged him to turn to art more seriously. 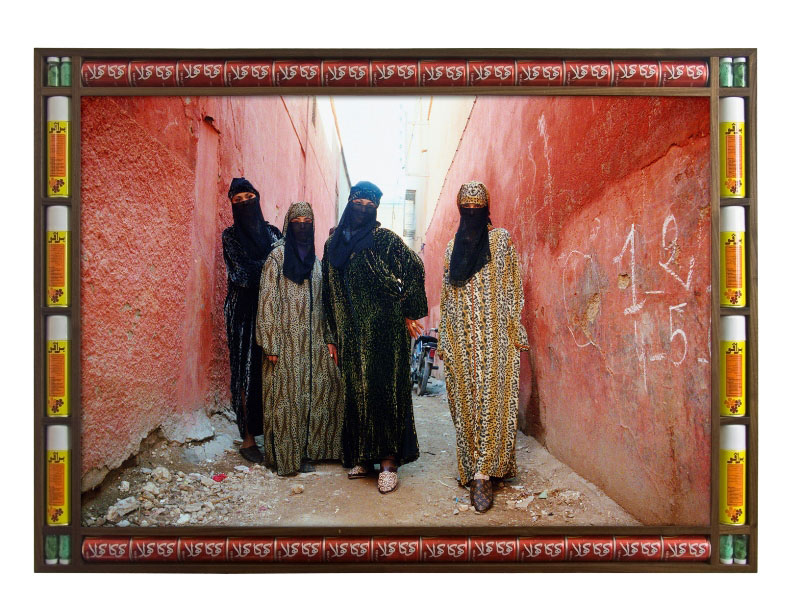 A lot of his protean past is grist to the mill in his current work.  In Jama Fna Angels, he presents a photograph of four women in a narrow, typically cochineal-walled alley: they are dressed in full-length fashionable leopard skin-design burkhas, one wearing Louis Vuitton babouches (the sort of rip-off babouches one finds in the souks of Marrakesh).  More interesting than the photograph is the frame.  What has become Hajjaj’s hallmark is his frames made of coca-cola cans, made more interesting by having the familiar brand-name in Arabic. 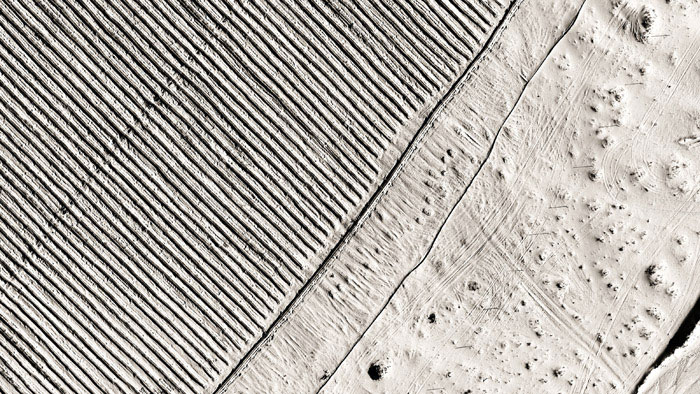 I am generally allergic to video art and am rarely tempted to watch a piece for more than a few seconds, but the star of the show for me is the video work by London-based Iraqi Jananne Al-A ni. Her eight-minute video piece is absolutely mesmerizing, poetic and utterly beautiful. Occupying the entire end wall of a small room, the video is black-and-white or sepia-ish video – redolent of an old faded photograph.  It takes us on a journey, as from an aircraft or helicopter: we drop very slowly, closer and closer to some sort of abandoned settlement or simple roofless, stone dwellings in the middle of the desert.  What looks like abstract or geometric shapes proves to be the walls of domestic structures.  There is no sign of human life – no cars, no people, no animals.  Just crumbling stone walls.  Is it an archeological site or a bombed-out village?  All is ambiguity, mystery, almost dream-like.  The sound track also features ambiguous, indecipherable sounds: one hears throughout what could be the rumble of the aircraft, interspersed with what could be very muted gunfire or shelling, the bells around the necks of goats, indistinct radio chatter, human cries of anguish?  As we draw closer and closer, the image dissolves and, tantalizingly, we move to another image of the pockmarked desert sand or some other structure. Circles, squares, parallel lines.  Every frame is beautiful and could be an independent photograph.  I watched the whole piece twice.  I could have watched it again and again.  It has a haunting and hypnotic beauty.

Intrigued, I googled the artist.  Born in 1966 to an Iraqi father and an Irish mother, she came to London when she was 14; she studied at Byam Shaw, then took a degree in Arabic at Westminster University, then an MA in Photography at the Royal College.  She has been exhibiting since 1987, initially as a painter, then as a new media and conceptual artist. Her work is in many major museum and private collections.

It is interesting that there are so many women photographers in the show.  It is not clear whether that represents the proportion of photographers in the Middle East or the relative caliber of women artists or, more simply, the personal tastes and agenda of the curator, Marta Weiss.

In any case, the shows reveals some very exciting and provocative work. Not to be missed!

Terence Rodrigues, besides being an author and critic, is an international art consultant, advising private clients on art sales and acquisitions.

He can be contacted on:-

Credit: All the photographs illustrated in this article belong to the Art Fund Collection of Middle Eastern Photography at the V&A and the British Museum. Jananne Al-Ani’s video work is shown courtesy of the artist and Rose Issa Projects, London.