The National Portrait Gallery is offering the first show to focus entirely on photographic portraiture by Man Ray (1890-1976), one of the most innovative and influential artists of the 20th century, a conceptual artist and film-maker but known today more for his photographs – even though photography was not his preferred artistic medium.

The exhibition comprises over 150 photographs, all vintage prints dating from 1916 to 1968, most of which have never been shown in Britain and are drawn from private collections and major museums, including the Pompidou Centre, MOMA New York and the Man Ray Trust Archive.

Man Ray lived in various exciting centres of creativity throughout his long life and became friends with the most important artistic figures of his time: New York in the avant-garde era following the famous 1913 Armory show; Paris in the 1920s and 1930s, where he played a key role in the Dada and Surrealist movements; Hollywood in the 1940s, where he joined Europeans who had fled the Nazis in Europe; and finally, back to Paris from 1951 until his death in 1976.

Man Ray was very secretive about his background and even refused to acknowledge that he ever had a name other than Man Ray.  In fact, he was born Emmanuel Radnitsky in Philadelphia in 1890 to Russian-Jewish parents.  His father changed the family name in 1912 to Ray because of anti-Jewish sentiments in the USA at the time.  Emmanuel was called ‘Manny’ by his family, but he deemed ‘Man’ a more distinctive name for an artist.

His parents worked in the clothing trade and, although Man Ray seemed embarrassed about this, tailoring left an enduring mark on his art: mannequins, flat irons, sewing machines, needles, pins, threads, fabric swatches etc. appear in almost every art work he produced.

He was very excited by the famous 1913 Armory Show, where he discovered the work of the iconoclastic maverick artist Marcel Duchamp, who was to become his friend and collaborator and of course one of the most influential artists of the century.

In 1915, aged 25, he had his first solo show of paintings and drawings. He turned to photography only to make a record of his art works.  In 1918 he produced his first significant photographs.

He abandoned conventional painting to involve himself with Dada, a radical anti-art movement.  He started making objects and developed unique mechanical and photographic methods of making images.  Like Duchamp, he did ‘readymades’ – art works made from ordinary household objects.  Gift (1921) is a ‘modified readymade’ – an iron with metal nails attached to the bottom, and Enigma of Isidore Ducasse is a sewing machine wrapped in cloth and tied with cord.

In 1920, Man Ray and Duchamp founded the Société Anonyme (Man Ray picked the name, having seen it in a French magazine, as, knowing little French, he thought it meant anonymous society, whereas it just means “Corporation” or ‘PLC’!).  The Société sponsored lectures, concerts, publications and exhibitions of modern art, including the International Exhibition of Modern Art at the Brooklyn Museum in 1926.

He teamed up with Duchamp to publish one issue of New York Dada in 1920, but he realized Dada would not work in New York, so, in 1921, he followed Duchamp to Paris.  He settled in the lively Montparnasse quarter, already home to many artists.  He met and fell in love with Alice Prin, know as  ‘Kiki de Montparnasse’, cabaret singer, actress and model to many famous artists.  Kiki remained his muse and lover for most of the 1920s. 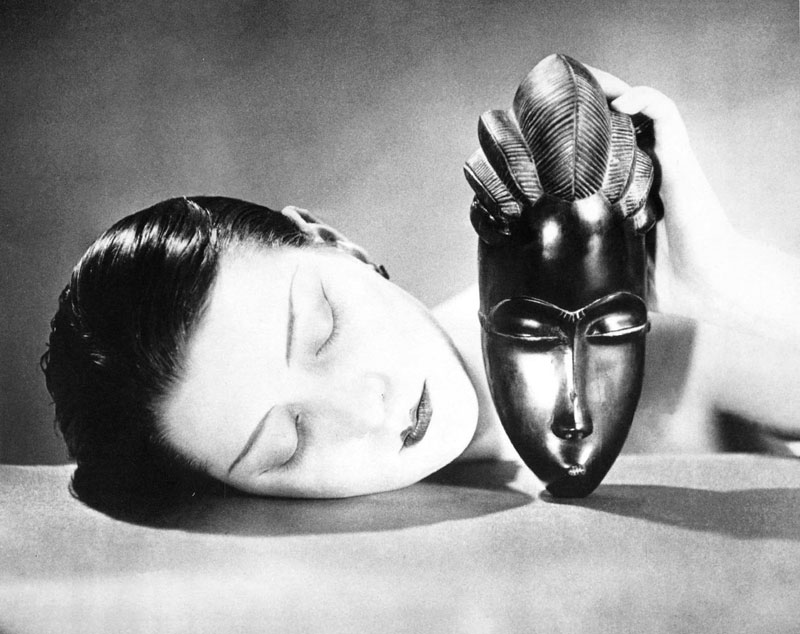 In 1929, the beautiful American Surrealist photographer and fashion model, walked up to Man Ray in a Paris café and announced: ‘My name is Lee Miller and I am your new student’!   Man Ray switched his affections to Lee Miller, who became his assistant, muse and chief model.  With her, he invented the photographic technique of ‘solarization’.  He also created a type of ‘photogram’ – negative shadow photographs made without a camera by placing objects onto the surface of light-sensitive paper and then exposing it to light.  There are several photographs of her in the exhibition. (Lee Miller, after ending her affair with Man Ray, moved to London with British Surrealist Roland Penrose and became British Vogue’s first female war correspondent, documenting the battle of St Malo and the liberation of Buchenwald concentration camp.)

It may seem surprising to us that Man Ray was a society photographer, working for leading fashion magazines Vogue, Vanity Fair and Harper’s Bazaar, but was also being taken seriously as an artist.  In 1925 he was represented in the first Surrealist exhibition with Picasso, Max Erst, Jean Arp and Miró.  In 1934, the German Surrealist artist Méret Oppenheim, famous now for her fur-covered teacup and saucer, posed nude for Man Ray in a well-known series of photographs.

Man Ray directed a number of influential short films, manned the camera on Fernand Leger’s Ballet Méchanique (1924) and assisted Duchamp with the cinematography of his film Anemic Cinema (1926).  He even made a brief appearance in a film – Rene Clair’s Entr’acte (1924), in a scene playing chess with Duchamp.

In 1940, with the rising waves of Nazism and anti-Semitism, Man Ray fled back to the USA, residing in Hollywood until 1951.  A few days after his arrival in the USA, he met Juliet Browner, a Romanian-Jewish dancer and artists’ model.  They began living together almost immediately and indeed married in 1946 (his second marriage as he had left his first wife back in 1919) in a double wedding with their friends Max Ernst and Dorothea Tanning.  Whilst he was officially devoting himself to painting, new research has revealed that he made significant photographic portraits during his stay in Hollywood, several of which are shown in this exhibition for the first time: including film star subjects such as Ava Gardner, Paulette Goddard and Dolores del Rio.

He regarded Montparnasse, however, as his real home so returned there in 1951.  His portraits from the 1950s include experiments with colour photography, such as his portraits of Juliette Greco and Yves Montand.  The exhibition closes with a portrait of Catherine Deneuve, which he was commissioned to take for an article and cover of the Sunday Times in 1968.

One has to say, many of the photographs in the show are notable for their sitters rather than as imaginative works of art.  Also, given how radical and idiosyncratic Man Ray was, most are surprisingly tame and straight: many indeed are totally unexceptional.  Many are very small and faded and difficult to see in the low light of the show.  Some do, however, stand out.

Violon d’Ingres is so well-known, but still merits a closer look.  It shows the naked back and buttocks of a turbaned Kiki de Montparnasse, with the f scrolls of a violin photogrammed on it, so that her torso resembles a violin.  Apart from being a homage to the classical portrait in art, it is also a play on both Ingres’ classic nudes and his love of the instrument – and a jeu de mots (‘violon d’Ingres’ a phrase meaning an activity which is not one’s main profession – which is how Man Ray regarded his photography).  The photograph on the exhibition poster shows the beautiful Lee Miller’s head in profile – simple, classic, like the head of the Queen on a stamp.

Coco Chanel looks effortlessly sophisticated and chic, her slender body sheathed in a long black dress, wreathed with long strings of pearls, a cigarette in her mouth, large bangles on her hands, her face in haughty profile. The portrait of Catherine’s Deneuve, wearing amazing, long spiral ear-rings designed by Man Ray, surrounded by works by Man Ray, was commissioned by the Sunday Times in 1968 for an article and the front cover.

Men he found more difficult since, as he put it, they were so much less certain of what they wanted.  His portrait of Picasso in 1933 captures the piercing gaze of his black eyes and his large workman’s hands.  One of the oddest is Duchamp with lipstick and eye shadow, dressed in drag, with a big fur collar, as his female alter-ego, Rrose Selavy.  The founder of Surrealism, André Breton, wearing goggles and what looks like a wimple, looks like a cross between an early aviator and a nun.

Man Ray obviously knew or got to meet everyone who was anyone in his day.  These photographs document an astonishing age – but some are also exhilarating, inventive works of art.

TERENCE RODRIGUES, besides being an author and critic, is an international art consultant, advising private clients on art sales and acquisitions.