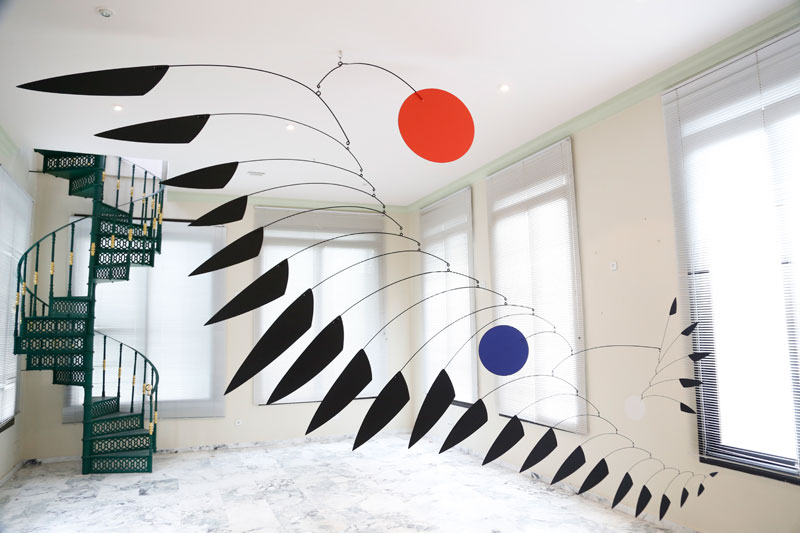 Manuel Marin Mobiles have been setting record prices at Auction, as demand continues to increase for the work of this iconic Spanish Sculptor,

Most  hanging mobiles by Manuel Marin Mobile measure between 1 metre and 1.5 metres, but an exceptionally large one is for sale through Objects of Desire in association with The Vintage Magazine. This magnificent example of Manuel Marin’s mobiles measures an impressive 5 metres by 2.5 metres.

This represents a unique opportunity to acquire a most stunning piece of mobile sculpture by Manuel Marin.

Here are examples of pieces sold at Auction at Christies South Kensington, London in 2016 and 2017 which clearly indicate the increase in interest in Manuel Marin mobiles represented by the actual prices achieved against the estimated values.

Manuel Marin was born in 1942 in Cieza, Murcia, Spain.

Aged 10 years old he developed a passion for bull fighting, and at 16 fought his first bull fight.

He fought alongside many of the great bullfighters of that period including: Chicuelo Segundo, Pedras Montero, as well as Miguel Mateo (‘Miguelin), Jamie Ostos and Manuel Benitez, better known as ‘El Cordobes’.

When he was only twenty Marin travelled to London and worked in an art gallery where he met the famous British sculptor, Henry Moore who employed Manuel Marin as his assistant in making bronze sculptures.

In 1964 he moved to New York where he worked as an Art restorer in the Mallorca Brothers’ Gallery.

He then decided to open his own gallery called, ‘The American Indian Art Gallery’, where one of his clients was Andy Warhol, who became a great friend, as did William Kooning, Jean Michel Basquiat, the artist Robert Indiana, and Haring Keltan amongst others.

In 1969, Marin became interested in mobiles as sculpture, and it quickly became obvious that he had discovered his ‘raison d’etre’ and his ‘metier’.

In 1970 he had his first exhibition at the Allan Brown Gallery in Scarsdale, New York, and subsequently exhibited all over the world, and became famous for his distinctive, brightly coloured mobiles, which now have an international following and the rest, as they say, is history.

Sadly, Manuel Marin died in 2007, but his distinctive, colourful mobiles are much in demand, and in recent years have made up to £10,000 at auction.

His widow retains some fine examples of his work, some of which are for sale exclusively through Objects of Desire, in association with The Vintage Magazine.