‘Objects of Desire’ has just celebrated its 10th Anniversary as an independent broker of fine art and antiques, including antique clocks and vintage watches.  We are delighted to be offering the following items which may solve that old problem of what to buy for the person who has everything:-.

A rare Platinum watch with ‘Tourbillon’, by Breguet – SOLD

A Vizagapatam Ivory and Horn Chess and Backgammon Set SOLD

We will be pleased to show these items to you by arrangement and to answer any questions you may have about their origins, condition and provenance.  Please contact Robert Jarman on robert.jarman@objectsofdesirecollection.co.uk 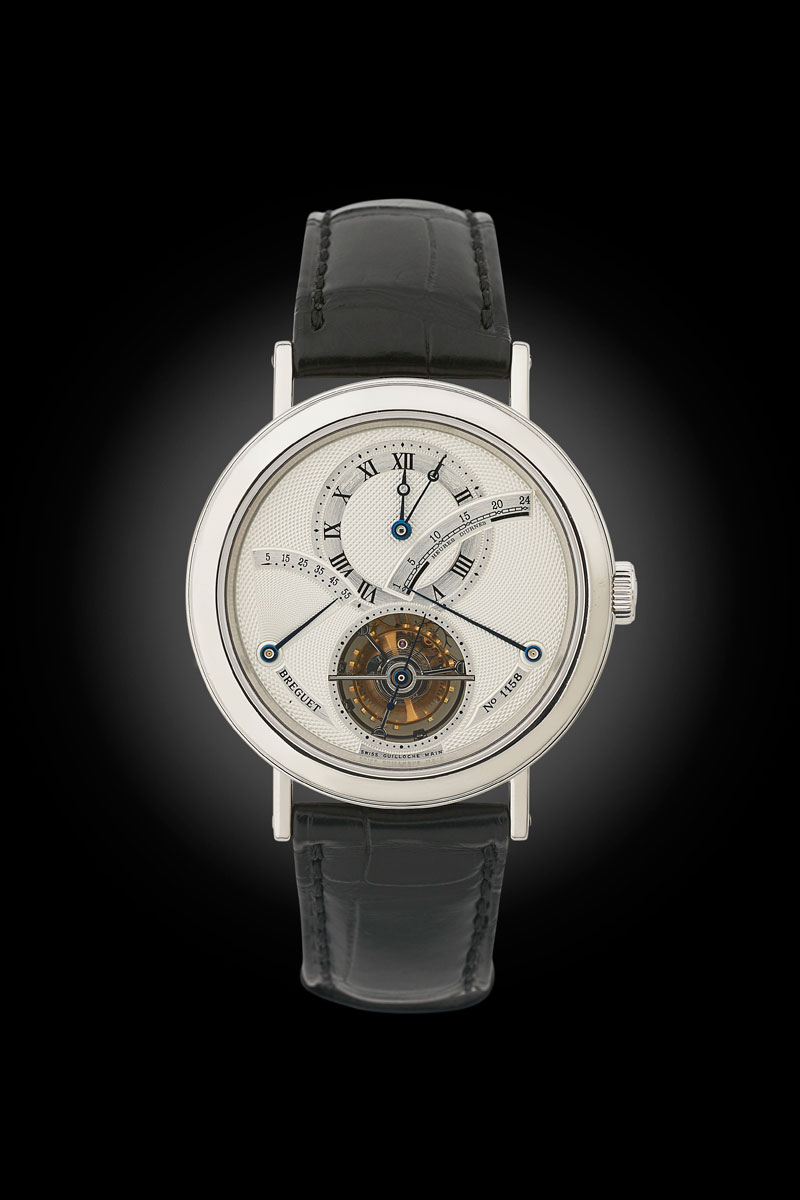 This exceptional and rare Breguet ‘Tourbillon’ watch comes from Breguet’s Classique Complication family of truly extraordinarily complex timepieces, which are released in highly sought after Limited Editions.  They are known for combining the very best in aesthetic beauty, and technical innovation.

The watch has a Platinum case, and a hand engraved “guilloché” dial.  The time display is off-set towards the top part of the dial with the Tourbillon located at ‘6’ o’clock with integrated seconds hand.  There are two fan-form sectors to left and right of the tourbillion, one to indicate the 55 hour power reserve and the other a 24 hour hand to indicate night-time and day-time hours.

The overall effect is one of classical harmony, and breathtaking horological proficiency.

The watch has a Breguet Black Crocodile Strap with a Platinum Breguet Deployment clasp and a burr walnut Breguet Presentation Box.

In October 2015 the watch case was reconditioned, the crystal and crown replaced and a new black crocodile Breguet strap fitted.

Water Resistant to 30 metres or 100 feet

(New models of this watch sell for £98,600 from Breguet’s New Bond Street Boutique in London)

The Horological Importance of the Tourbillon

Abraham-Louis Breguet’s historic invention, the Tourbillon regulator, was patented in 1801.  This device was conceived to compensate for the errors in rate caused by the constant changes in the watch’s position.  It consists of mounting the escapement and sprung balance in a mobile carriage which rotates on itself with utter regularity.  Errors are thus reproduced regularly and cancel each other out, rather than accumulating. Two centuries later it remains a technical ‘tour de force’ of which very few watchmakers are capable.

Abraham–Louis Breguet (1747 – 1823) is generally regarded as being the most inventive, innovative, stylish, and exclusive watchmaker in the world.

His legacy continues in the present day watches created by ‘Breguet’ and are considered to be the finest in the world.  A modern day watch with a tourbillon is recognised as being a demonstration of watchmaking virtuosity.

The ultimate in Games Boxes, these Anglo-Indian gaming boards in the shape of a book with double spine and lock were made in the Southern Indian province of Vizagapatam, circa 1840.

This particularly fine example has three ivory and horn inlaid inner boxes containing a complete set of pieces for chess, backgammon and draughts (same counters can be used for both games), all made from the finest Indian ivory and horn contained within a sandalwood and penwork decorated box.

One set of chessmen are stained black/brown the other left natural, The kings (4⅜ ins. high) and queens with galleries, bishops with mitres, knights as horses, rooks as brickwork towers (N.B. there is some damage to these pieces and the two sets of pawns are different but from the correct period and style) 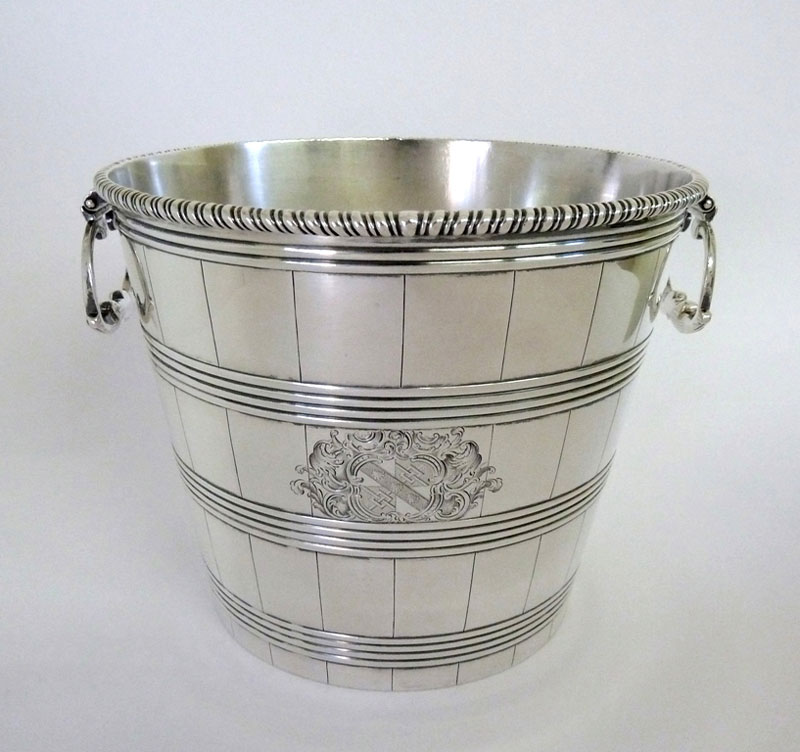 The arms are for Spencer of Althorpe but were put on in the 19th century, probably circa 1820 when the piece was acquired by the family.

18th century wine coolers are far rarer than their 19th century counterparts and this example is modelled as a ‘pail’.

These cups, which first appeared in the 1760s, were initially made from sheet silver and always modelled as the head of a fox.  By casting the Victorians improved on the quality but also varied the subject matter.

The Cup is engraved with the number 6 suggesting that this might have been part of a larger set. 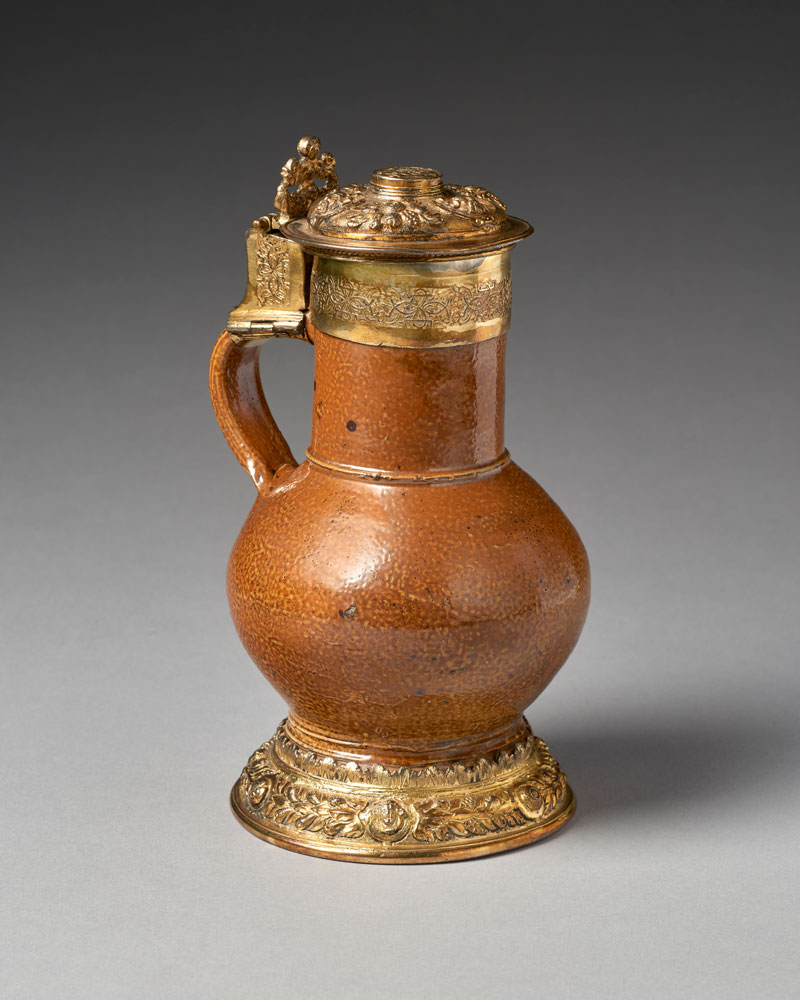 This stunning tigerware lidded jug boasts outstanding Elizabethan period artistry. This exceptionally rare silver-gilt mounted tigerware jug was crafted during the Elizabethan period. This handsome vessel is adorned with highly elaborate silver-gilt mounts, including a boldly repousséd hinged lid, which beautifully contrasts the mottled texture of the stoneware body. To find one of these extraordinary jugs, dating to over 400 years, is truly remarkable not only due to the fragility of the stoneware, but also because these pieces were in fashion for a relatively short time, from approximately 1550 to 1630. Still in excellent condition, this jug is of exemplary artistry and craftsmanship.

A REGENCY ORMOLU AND PATINATED BRONZE

with an eagle finial, the dial flanked by two reading maidens. 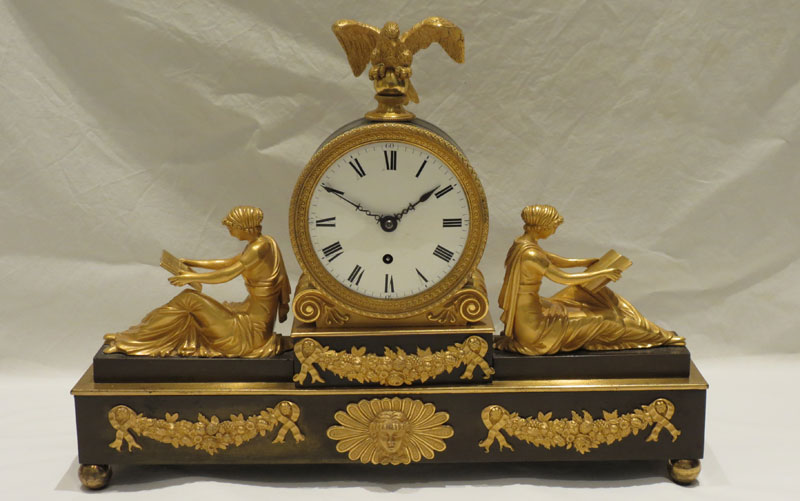 CLICK THE IMAGE BELOW TO VIEW ENLARGED DETAILS OF THE bRONZE AND ORMOLU MANTEL TIMEPIECE BY F. BAETENS

The clock’s design derives from a drawing in a catalogue produced by the celebrated ciseleurs-doreur Francois Rémond, circa 1785, which incorporates figures designed and supplied to the Sèvres factory for reproduction in biscuit porcelain by the sculptor Simon-Louis Boizot.  Another Regency example exhibiting the same details was almost certainly bought by the 2nd Marquis of Bath for Longleat, Wiltshire and remained in the family until sold in the June 13-14th 2002 sale entitled, ‘Furniture, Porcelain and Silver from Longleat’ by Christie’s London, lot 304 selling for £14,340.

Robert Jarman at Objects of Desire