The story of the rivalry between James Hunt and Niki Lauda.

I recently renewed my friendship with Tom Hunt, son of the late James Hunt, and protector of his legacy.  Tom, and his brother Freddie, have set up the James Hunt Foundation to raise money to invest in causes which they believe their father would espouse if he were still alive. 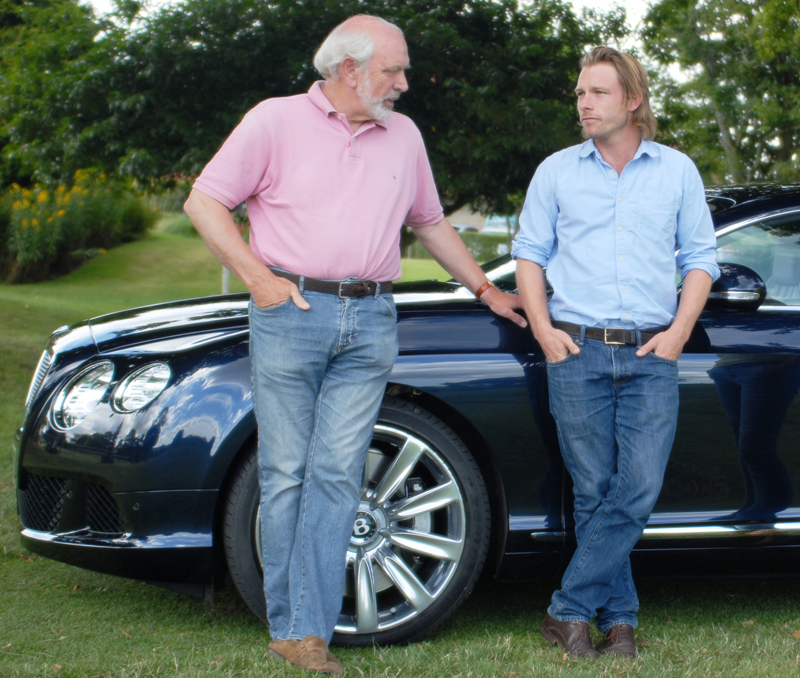 In addition to the Foundation, Tom has been incredibly busy promoting a new film called RUSH, which documents the astonishing friendship and rivalry between his father and Niki Lauda.

Having seen a Preview of RUSH, I believe it will be a massive hit.  It will be premiered at Leicester Square, London on 2nd September and for general release on 13th September, and I urge all our readers to go and see it, regardless of whether you are interested in motor racing, because it is a splendid period piece, beautifully recapturing the energy and excitement of the seventies. 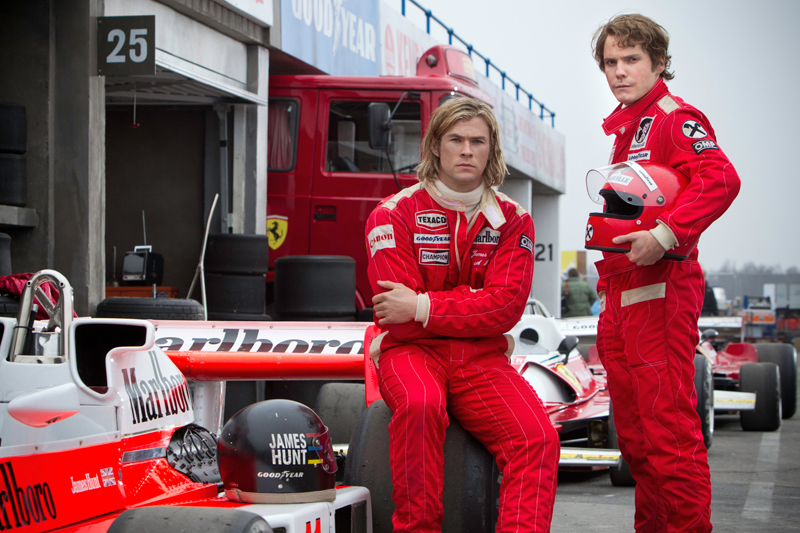 It is not just a film for Petrol Heads, but a fascinating insight into the world of Formula One in those heady days, when it was accepted that at least two F1 drivers would die each season on the race track, and when, for James Hunt at least, each race was preceded by wild parties, womanising, casual sex, and excessive alcohol intake, and God knows what other recreational substances!

Rush refers to an Adrenaline Rush which is ‘a feeling of excitement, stimulation and enhanced physical ability produced when the body secretes large amounts of adrenaline in response to a sudden perceived or induced stress situation’, something which racing drivers know all about!

This film brought back so many memories of that period, including the Monaco Grand Prix when James Hunt, was forced to retire after one of his famous ‘Shunts’, leaving Niki Lauda to win, to the delight of about 100,000 Italians screaming for Lauda, because he was driving for Ferrari.

I loved the whole period feel of the film and the soundtrack which was littered with perfectly-chosen, evocative music like ‘Keep on Running’ by the Spencer Davis Group – these were the tracks of my years.

Ron Howard as director tells a powerful and complex story of love, lust, jealousy, betrayal, and anger, in the most sensitive way, without becoming sentimental, which is a hard trick to perform, and I thought the closing sequences with real footage of James Hunt and Niki Lauda, interspersed with film footage, was brilliant, and the closing shot of Niki Lauda’s face, showing the scars of battle, and the haunted look of a man with too much pain to remember, was pure genius.

It had me in tears, so God knows what it did to Tom Hunt, and I have not yet been able to ask him because he is flying all over the place attending Premiers for the next few weeks!

However, it must have been a cathartic experience for him, but a good one too, I hope, because beneath all the bluster and bravado, this was a passionate, and touching story of the relationship between the best of friends, who were also the most determined of competitors, and the greatest of rivals, and who inspired each other’s genius on the race track.

It is an audio-visual assault on the senses, with high octane racing scenes, at famous Grand Prix tracks all over the world, and it provides a fascinating insight into the sex appeal of fast cars and the men who drive them.  I think Formula One racing must be right up there with money and power as an aphrodisiac, because some of the most beautiful women on the planet seem to frequent the Grand Prix circuit, in search of the raw excitement, and adrenalin rush which only racing driving can generate, with the constant threat to life, and the distractions which they engaged in.  This was James Hunt’s natural habitat, and provided a fertile hunting ground for him, which he took full advantage of!

There is no doubt that Formula One racing was so much more dangerous in those heady days,  with the drivers acknowledging that by the end of the season at least two of them would be dead.   As Chris Hemsworth acutely observes, “The era was passionate, the style of racing was passionate.  It was when the sex was safe and the driving dangerous – now it’s the other way round”.

It was only people like Niki Lauda, and Jackie Stewart who finally managed to make the powers that be, sit up and listen to their concerns and demands for greatly improved safety features on all F1 cars and at racing circuits.

Perhaps the bravest thing Niki Lauda did was returning to F1 racing only six weeks after being involved in the most appalling crash at the dreaded Nurburgring, when the ensuing conflagration engulfed him for several minutes before he was dragged away, leaving him with the most appalling injuries.

He had to wear a specially adapted, or modified AGV helmet in the weeks following his Nürburgring accident so as the lining would not aggravate his burned scalp too badly.

However, his  decision to retire, half way through the Japanese Grand Prix at Mount Fuji, in torrential rain, was more to do with the fact that, he could no longer blink his eyes because he had been burned so badly.  Anyway, he made the decision that, with his handicap, the odds were too heavily  stacked against him, and it was undoubtedly this decision to withdraw which enabled James Hunt to complete the race, and become World Champion but quite possibly saved his life.

However, it was no mean feat for James to complete the race, given the appalling conditions, and the fact that he had a puncture and was forced into the pits where they made a complete mess of the wheel change, and he only just managed to claw back enough places to secure the World Championship.

Undoubtedly that race would never have been allowed to go ahead in today’s climate of safety first.   Fortunately, the modern F1 cars and racing circuits are all equipped with state-of-the-art safety features and other precautions, which have saved many lives, and it is a tribute to the courage and determination of Formula One racing drivers in the seventies, that they drove so many races, with such poor protection, either inside the cars or on the race tracks, and James Hunt and Niki Lauda, were two of the bravest of the brave.

Niki Lauda took the news of James Hunt’s early death in 1993, at the all too young age of  46, very badly, and clearly had the utmost respect and affection for his British rival, despite their quite obvious differences, culturally, physically, and mentally, but there is no doubt that they inspired each other, and the result of their rivalry produced some of the most spectacular F1 driving ever seen.

In fact the rivalry on the race circuit has been treated with some poetic license for the sake of telling a good story in the film, Rush because in fact, James and Niki were good friends and had shared a flat in London.  Niki Lauda admits that he wanted to beat James, to destroy him but in the same breath says that James was the only person that he wanted to hang out with in the evening.  Doesn’t that speak volumes about the true James Hunt?

In anticipation of the revival of interest in their father’s career, created by the release of RUSH, Tom, and his brother Freddie, have set up the James Hunt Foundation to raise money to invest in causes which they believe their father would espouse if he were still alive, and these include ecological projects, as, ironically, given the eco-unfriendly world of Formula One racing, James Hunt became something of a ‘green warrior’ in his post driving years.

In addition to the Foundation, Tom Hunt has been incredibly busy helping promote RUSH, and will be attending the Premieres in London and Toronto over the next few weeks.

They have also set up an impressive official James Hunt website:www.jameshuntf1.com which has lots of information about the Foundation, and the Film, RUSH, and James Hunt’s biography and racing career.

Finally, I am delighted to announce that The Vintage Magazine has agreed to support a number of initiatives to raise money for The James Hunt Foundation, and we will publish further details in the next few months.

Meanwhile, I urge you to watch this film, even if you have no interest whatsoever in Formula One Racing as it will transport you back to the heady days of the seventies!

Founder and Editor of The Vintage Magazine