In association with Trinity House Paintings, Objects of Desire are pleased to present three stunning paintings by Sir Alfred Munnings:- 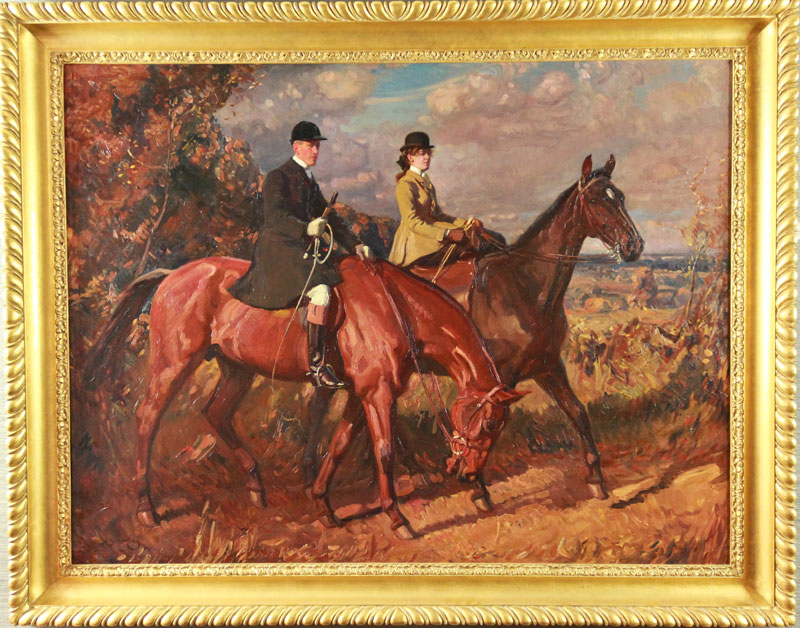 Entitled:  ‘Going to the Meet’,

Painted in 1907, this painting  was one of the most ambitious canvases that Munnings had attempted to this date, and it was the first commissioned work that he had been asked to carry out on this scale.  Previously he had painted ‘A Suffolk Horse Fair’, (1901, Sir Alfred Munnings Art Museum) and ‘The Vagabonds’, (1902, Private Collection) both of which measured 50 x 80 inches, but neither were commissions, which by their very nature are more demanding.  Although his style was clearly recognisable at an early stage, Munnings paint application varied in the formative part of his oeuvre.   ‘Going to the Meet’ clearly draws on the conventions of John Charlton (1847-1917) and Charles Wellington Furse (1868-1904) but the sweeping and confident brushstrokes look forward to his work of the 1920’s.

The glistening highlights on the horses in ‘Going to the Meet’ clearly illustrate the fluidity of Munnings’ style, which became his hallmark.

Born in Mendham, Suffolk, Alfred Munnings was the son of a miller.  He was apprenticed to a firm of lithographers from 1893 to 1898 and studied at the Norwich School of Art and in Paris.  There, Munnings was impressed with plein-air naturalism; this, together with his introduction to the racecourse in 1899, influenced the themes for which he became famous.

While in Mendham, Munnings painted many scenes of country life, particularly horse fairs.  He went to Cornwall in 1908, and for many years was an important addition to the Newlyn School of artists.  When the First World War broke out, Munnings enlisted, despite having the use of only one eye owing to an accident in 1899.  He became an army horse trainer near Reading and later went to France as an official war artist, attached to the Canadian Cavalry Brigade.

The year 1919 was a major turning-point in all aspects of Munnings’s life; he painted his first racehorse, ‘Pothlyn’, the winner of the Grand National, and became an Associate of the Royal Academy.  Munnings met Violet McBride, whom he was to marry, and bought Castle House, Dedham, where the Munnings Memorial Trust maintains a permanent exhibition of his pictures.  Munnings’s prolific career, spanning over 60 years, brought him honour, with election to the Presidency of the Royal Academy in 1944, a Knighthood in 1945, and a personal award from the Sovereign in 1947, when Munnings was created Knight of the Royal Victorian Order 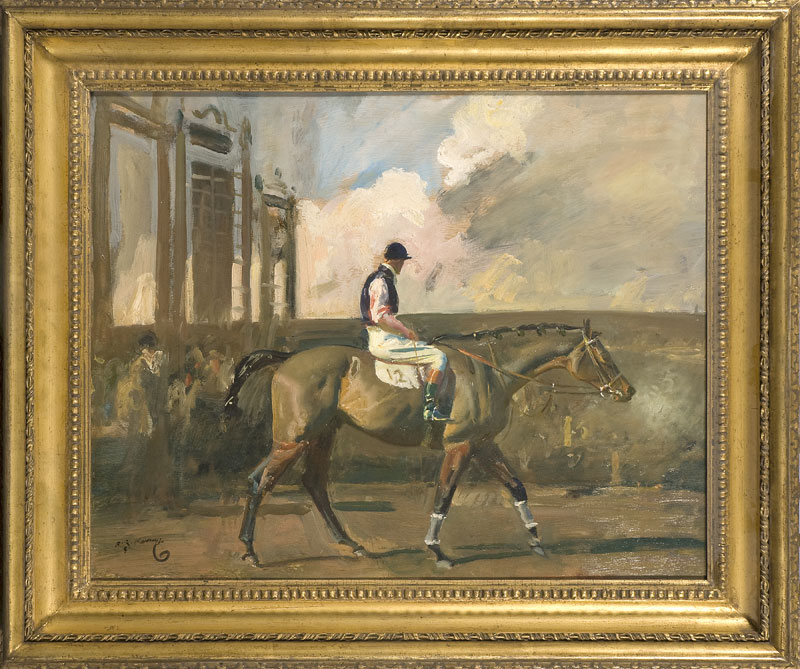 Breaking with the two hundred year historical tradition of racing compositions featuring a horse galloping across a finishing line, Munnings brought to the portrayal of the racing occasion a revolutionary freshness and brilliance.  His focus was directed towards the minutes prior to the start of the race; the preparations for saddling and the dramatic moments as the horses and jockeys jostled for an advantageous starting position and his interests also lay in the direct aftermath of a race, scenes not usually depicted before.

After the race, Cheltenham explores this: portraying a horse in a paddock just after its race.  It appears exhausted with its head held low, breathing heavily, the jockey relaxed in his saddle, the reins loose in his hands.  It is the artist’s knowledge as a horseman which captures the familiar gestures often missed.

Munnings seemed intrigued with this image, he painted a very similar composition, After the race; going to Weigh-in and his last and largest rendering of After the race was exhibited at the Royal Academy in 1946.

In his autobiography, Munnings writes of his struggle to capture the moment in oils, ‘After the race! That should be my picture!  As the field sweeps by the winning post I am already hurrying to the scene, which is over all too quickly… A winter afternoon with bright sun;- I love the winter sunlight – many horses are returning after a steeplechase.  With extended nostrils and quivering tails, they come to a stand; the jockeys, dropping their reins, dismount and unsaddle, and all too soon the steaming horses are led away and the scene is ended’ (see A.J. Munnings, The Finish, Bungay, 1950, p. 284)

Unless the work was expressly commissioned, Munnings did not usually name the subjects in his paintings, often using his own horses as models, even to the extent of having his wife ride a hunter several times round a field to help him with a portrait of ‘a tired hunter’.  The colours worn by the jockeys in this painting are not specific to a particular owner or owners.  Munnings used similar colours in many of his non-commissioned works. 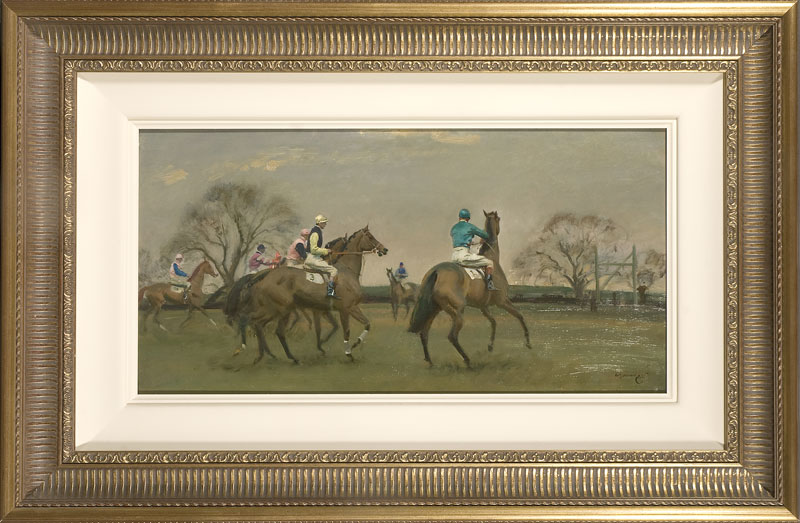 Sir Alfred Munnings is best known as a sporting artist, depicting scenes of huntsmen in scarlet coats, society figures attending the most glamorous race meetings of the seadon and classic portraits of exquisite English thoroughbred bloodstock.