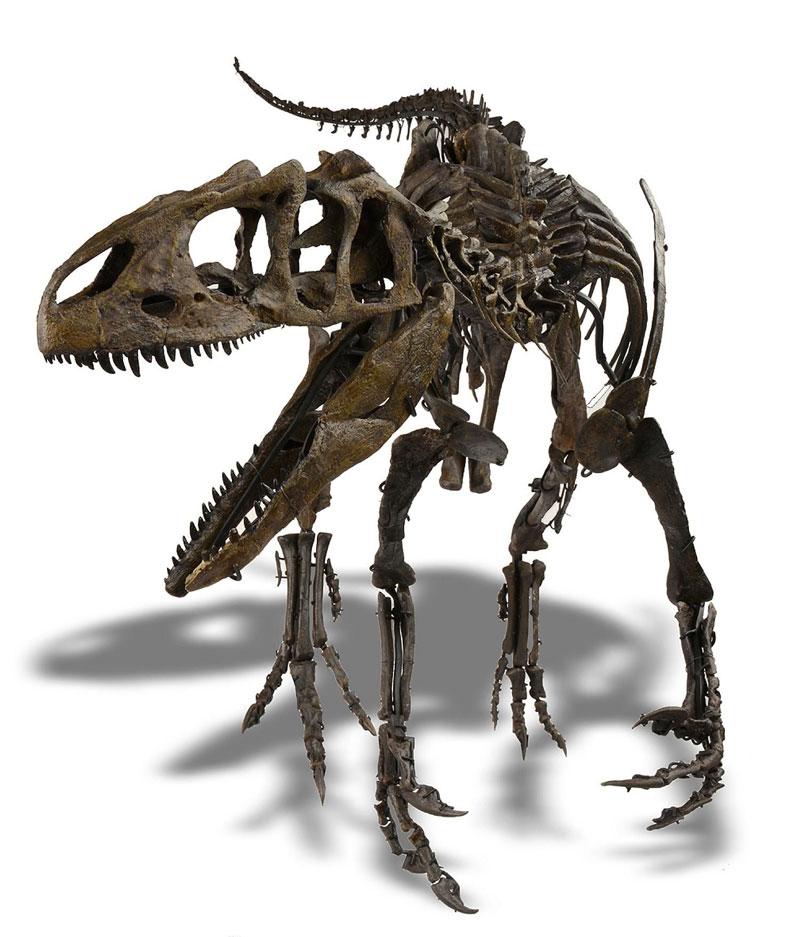 Summers Place Auctions are pleased to announce that the star lot in the third Evolution Sale is an exceptionally rare juvenile Allosaurus, a first for a UK auction house. The 285 cm long (112 ins), 150-155 million-year-old skeleton was found in Wyoming, USA and is expected to fetch £300,000 – 500,000 in the sale on Wednesday, 25th  November 2015.

Remains of small dinosaurs and juveniles of larger species are extremely rarely found. This is because the most likely cause of death was predation, meaning there would be little left to be preserved. Allosaurus was a large Therapod dinosaur which was close to the top of the food chain; apex predators are relatively rare and in such a competitive environment the survival of any juvenile material is remarkable. In 2006 a juvenile Allosaurus was described for the first time from the partial remains of one hind limb. This led them to hypothesize that the juvenile Allosaurus had longer limbs, both thigh bones and lower leg bones, suggesting they were faster than adults and perhaps chased their prey rather than using the adults likely ambush strategy. This specimen is far more complete than the one described. In general a specimen with preservation of 50% or more is considered to be “complete”.

In this case, the Illium (part of the hip joint) was the first bone to be discovered of this specimen in 2010 and its excavation took three digging seasons to complete as the scattered remains were lying above a large Sauropod which also needed to be uncovered. (separate release available)

Among the fossil section of the sale, a large starfish, found in Solnhofen, Germany and from the Lower Jurassic period, is of particular importance and estimated to fetch £4,000 – £6,000. The 25 cm by 42 cm plaque, rather unusually, shows the trail of the animal’s movement. Solnhofen in Germany is one of the most famous and important fossil localities in the world, and it is from here that the celebrated Archaeopteryx (the first known bird) was found. The quarries around Solnhofen were originally mined for the beautiful lithographic slate they contained and the process of lithography was invented using this stone.

The rare Liopleurodon ferox skull, which is from the mid to late Jurassic and was found near Peterborough, is estimated to sell for £25,000-40,000. This specimen was discovered in the 1980s, when a collector saw some teeth and jaw sticking out from an enormous Septarian nodule, weighing over 125 KG. Septarian is a very hard material and the skull has been painstakingly revealed by cutting away the mineral. It is considered that this species was the apex predator of the seas that covered Europe at that time. This specimen consists of the 82 cm long skull, the lower jaws, over 20 teeth, a partial scapula, several ribs and a cervical vertebra. It has been worked on both sides but is still held within the original matrix. The articulations of the lower jaw and quite a few teeth were lost prior to fossilization so it would be reasonable to suggest that the specimen was not rapidly covered and fossilized but its covering took much longer and the skull was exposed to currents and scavenging which has led to the losses mentioned above. 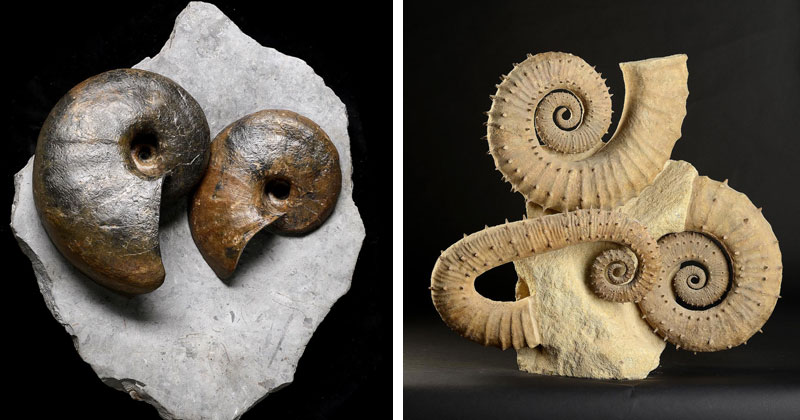 The taxidermy part of the sale has many superb examples of this craft included. There is no question though that the most historically important lot is the rare male passenger pigeon (Ectopisces migratorius) from the early 20th century which carries an estimate of £8,000 – £12,000. This species was once the most common bird on earth with numbers estimated at the start of the 19th century in billions, but these numbers fell dramatically and the very last individual expired in its cage at the Cincinatti zoo 100 years ago in September 1914. Three books have been published celebrating this 100th anniversary. See Errol Fuller The Passenger Pigeon, Princetown University Press 2014.

The minerals section of the sale impresses with a wide range of specimen. From Afghanistan and impressive due to its large size, is the Lapis Lazuli. At 60cm high (24 ins) and weighing 49.3 kg it was found in a very small area of Badakhsham in Afghanistan and the vein has been continuously quarried for over 3,000 years. The striking blue colour of Lapis Lazuli has been admired and coveted since the earliest days of civilization. Famed for the richness of its deep, celestial blue with aventurine inclusions, these are increasingly being appreciated as sculptures in their own right and as stunning additions to any interior. It is estimated at £5,000 – £8,000. A massive quartz and agate freeform from Madagascar is expected to fetch £3,000 – £5,000. 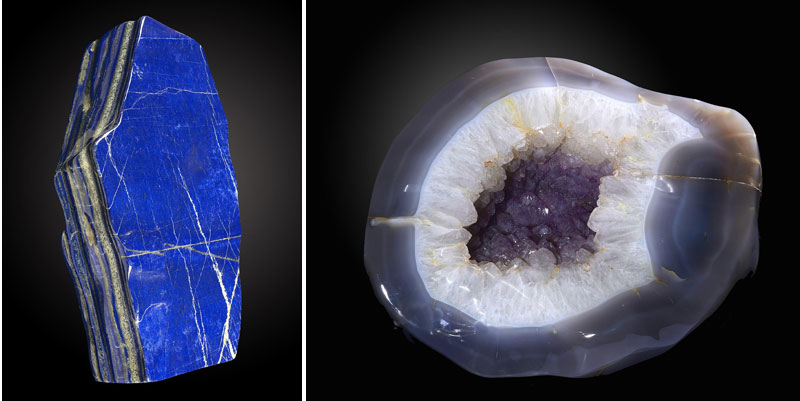 The sale also offers a chance to acquire an antique collectors cabinet with great provenance. The 24 drawer mahogany collectors cabinet, with double bank glazed drawers from circa 1860 (92 cm high by 138 cm wide) was built for James Charles Dale (1791- 1872) who was born into a family of wealthy landowners near Blandford in Dorset. He became inspired by the world of entomology after capturing a Queen of Spain Fritillary, at that time one of the first to be collected in this country. This passion was to last throughout his life. He pursued his interest in butterflies quite scientifically and kept good records as well as his renowned collection of specimens. In 1832 Dale made his most famous discovery of a butterfly new to Britain, the Lulworth Skipper. Dale’s collection passed to his son after his death who bequeathed the collection to the Hope Department of Entomology, Oxford where the collection remains to this day. Dale’s diaries and correspondence reside at the Oxford University Museum of Natural History and are regarded as one of the most important legacies left by any British entomologist. The collection of specimens was housed in a staggering 39 cabinets some of which have had to be re-housed in modern cabinets for their safe keeping. It is estimated to fetch £4,000- £6,000.

Other lots of interest in particular for those looking for interesting items to jazz up their home, are a very large red deer skull (est. £800 – 1,200) and a case with interesting beetles (part of a group of cases) with an estimate of £400 – 600.

For further information on the auction, please visit www.summersplaceauctions.com or call 01403 331331.

The sales are held in the award winning 5000sq ft gallery nestling within 6 acres of walled gardens and the arboretum of the Victorian mansion, Summers Place.