During a torrid August for world equities all developed and emerging markets plummeted, dragged down by fears of continuing slowdown in China and the knock-on effect that this may have on the prospects for global recovery.

Now that the initial hiatus has died down and since markets have stabilised for the time being, we feel that it is time to consider assets that have been sold indiscriminately, regardless of value.

UK equity markets have been very badly affected, with the FTSE 100 falling 14.76% peak-to-trough.  Whilst this has been justified across some sectors of the index (mining and oil stocks for example), many others have been unfairly tarnished, panic sold in the face of a worsening positon in China to which they are not really exposed.

With the FTSE 100 currently sitting at 6171, we believe that the recent sell-off has created good value.  This month we look at the relative performance of differing sized UK companies and consider the reasons why now might be a good time to buy unloved UK equities, particularly for those who have very little exposure at present.

It has been one of the worst Augusts for years in the UK and not just because of the weather.  Equity markets suffered a very aggressive correction in response to weakness in Chinese growth prospects, starting on the 10th August and creating volatility all the way through the month.  The MSCI Emerging Market Index entered a bear market, falling over 20% from its peak last September and this has led to most developed markets also entering a technical correction.

Is the recent sell-off justified?  In China we think that the correction is definitely justified, driven mainly by a dramatically slowing economy.  However we feel that the knock-on into developed markets has been more severe than is warranted and the UK market has been badly affected despite strong domestic fundamentals.  This month we consider the prospects for the UK market specifically and examine the divergence in performance across different sizes of company in the UK.

As demonstrated in the chart below, from September 2013 to September 2014 every “layer” of the FTSE All-share index returned the same (small, medium and large UK companies all delivered annual returns of 10-12%).  Admittedly there was some divergence mid-year, as smaller companies were sold and a rotation into under-loved large companies took place but the correlation between various company sizes increased dramatically later on in the year.

Whilst there have been few places to hide within equity markets as a whole, ironically those companies that are traditionally more defensive, larger market capitalisation stocks in the FTSE 100, have suffered larger declines in the past twelve months.    Portfolios with a higher percentage of exposure to UK mid and small cap stocks have outperformed those with a large company bias. So why, in the past twelve months, has the FTSE 100 underperformed the FTSE 250 by a staggering 16.33%?  The reasons are as follows:

It should be no surprise that the Oil and Mining sectors have been hammered because of the concerns surrounding Chinese growth and the associated expected drop in demand (see last month’s overview).  Oil and Mining shares make up almost a fifth of the FTSE 100 but next to nothing of the FTSE 250. No wonder then that the FTSE 100 has underperformed.  The chart below demonstrates just how poorly the mining sector has performed relative to the FTSE 250:

This year Glencore has fallen 55.32%, Anglo American 42.99%, Rio Tinto 24.30% and Royal Dutch Shell 26.29%. If you stripped these two sectors out of the index then the FTSE would be close to the level that it started the year, rather than down circa 7% as at the time of writing.

In 2014, $2.8 trillion of corporate deals were completed worldwide, an increase of 37% on the year before. The FTSE 100 was a large beneficiary of this despite two of the largest bids failing to materialise, namely Pfizer’s bid for AstraZeneca and AbbVie’s bid for Shire. However this year there have been a significantly lower number of bids involving FTSE 100 companies, partly as a result of changes to US tax legislation but also as a result of political uncertainty in the run up to the UK general election.  This has held back the performance of the UK’s largest 100 companies at a time when the FTSE 250 and small cap indices have seen growing levels of M&A.

With interest rates globally falling to record lows in 2009, high dividend yielding stocks, typically utilities, oil majors and banks in the FTSE 100, continued to be bought extensively in 2014 by those individuals seeking an alternate source of income to the interest that they previously received on cash deposits. As a consensus view developed through May and June of this year that the Federal Reserve and the Bank of England would look to raise interest rates at some point through the autumn there was less pressure on institutions and individuals to chase yield in larger companies on the basis that there would soon be an increase in the yield on fixed interest securities as rates rise. High yield stocks, commonly used as bond proxies, struggled as a result.

US $ and Emerging Market Weakness

With 19% of FTSE 100 profits exposed to the US dollar, short term weakness in the greenback in August also played a part.  Of greater impact though is the FTSE 100’s exposure to the emerging markets.  Capital Group research confirmed that 30% of FTSE 100 company revenues now come from emerging markets.   Not only have EM economies’ currencies fallen but slowing growth prospects have also destroyed share price valuations too.  UK companies repatriating profits in Sterling have suffered greater than expected falls in earnings as a result.  This is in contrast to the FTSE 250, where listed companies generate 50% of their revenue at home.

As is always the case during the summer months, on the predominance of trading days we have witnessed lower activity and trading volumes. These low volumes have exacerbated the short-term falls in markets and led to a spike in the level of volatility.

At the same time, it has mainly been hot retail money that has been panic selling in reaction to the Chinese news.  Typically, many DIY retail investors own index trackers and exchange traded funds (ETFs) as a way of expressing their market view, mainly because these products are low cost.  The biggest ETFs tend to be the FTSE 100 and S&P 500.  Therefore it should come as no surprise that the FTSE 100 has fallen more than other indices once panic selling set in.

So is now time to increase FTSE 100 exposure?

Over the past few years we have favoured a high weighting to overseas markets, in particular the US and Japan, and also held a bias to mid and small cap companies within the UK element of portfolios.  Whilst we own a smaller percentage of UK equities than most of our peers, we have owned and continue to own FTSE 100 companies and feel that they are now looking good value after the recent fall.

August is typically a poor month for larger companies (see chart below) with September and October usually very positive relative to smaller companies (for what that is worth).

However of more relevance is that large institutions such as Legal & General, Investec, Ashmore and Morgan Stanley have now become bullish about the prospects for developed market equities since the sell-off and have recently started buying again.  This could signal the start of a period of strong buying of UK equities and in particular larger companies, which have suffered the most.

In general the positive outlook for large UK companies relates to a reversal of the very factors responsible for their decline this year.  The US $ has already started to appreciate against Sterling and trading volumes, whilst still low, have started to normalise following the summer holidays.  There is increasing uncertainty over the timing of future interest rate hikes in the US and UK with many predicting that interest rates may stay on hold into 2016. However perhaps of greatest significance was the suggestion from Capital Economics that global growth (and in particular UK and US GDP growth) will remain stable and positive for the foreseeable future.  They are forecasting US GDP growth of 2.3% this year and 2.8% next and as such a recovery in the S&P to 2100 by the end of 2015.

Regardless of weakness in emerging markets, it is our view that developed market equities are good value now for those prepared to take a long-term view. 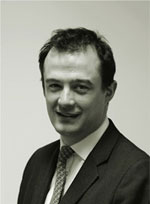 James is co-founder of Mountstone Partners and is responsible for managing client portfolios, chair of the asset allocation committee and has oversight of the portfolio construction process.

Prior to founding Mountstone, James was an Investment Director at Brooks Macdonald, a firm that manages £4.5 billion of private client portfolios. At Brooks Macdonald James was one of 3 Investment Committee members responsible for the entire investment process. He was an Asset Allocation Committee member, head of 5 London investment teams and was responsible for client relationships representing £239 million of client portfolios.

James has been recognised as one of the “Top 40 Under 40″ advisers in wealth management in the UK (as awarded by PAM) for the last 2 years running.