Some businesses grow slowly, some explode onto the scene and continue to grow to outstrip their competition. Vardags, the ‘Diva of Divorce’ Ayesha Vardag’s eponymous matrimonial law firm is definitely a case of the latter. Beginning life in 2005 out of the spare room in Ayesha’s Georgian townhouse in Islington, Vardags started small. Less than a decade later, it’s firmly established in London’s ‘Magic Circle’, running many of the biggest-ticket clients and hiring lawyers from top city firms, with Ayesha dubbed “Britain’s top divorce lawyer” and “the Diva of Divorce”.

A lot has changed in a relatively short space of time. When Vardags began in that Islington townhouse, all was not entirely rosy for Ayesha. Having gone through a messy divorce with the father of her two sons, she had seen a lot of change – emotional and professional – in a short space of time (something that was to become something of a theme as time wore on). On the back of her divorce, which saw her use her experience as a finance solicitor to undertake a lot of the groundwork herself, she was offered a job by her divorce lawyer. Later deciding to go it alone as a family lawyer, the fledgling business – or one-woman show – launched at the insistence of a big client in the form of a parent at her son’s school.

Becoming busier and busier, it reached the stage where she had to recruit another member of staff, which is, Ayesha says, the moment where “the fear really comes upon you. Suddenly you are responsible for someone’s rent or mortgage.” But, Ayesha’s credo has become fearlessness; or rather, feeling the fear and doing it anyway.

The rest, as they say, is history. Particularly in 2010 when Ayesha won a landmark Supreme Court victory in Radmacher v Granatino, a case that saw her client’s prenuptial agreement successfully upheld to protect her reported £100 million fortune, which changed the law. Prenups are now enforceable unless unfair, and the Law Commission has since recommended that this be enshrined in statute as well as case-law.

From Radmacher onwards, the firm really took off. The handful of employees who were around for that mammoth case morphed, over the next few years, into a 50-strong workforce, encompassing both lawyers and business professionals. Ayesha referred to that first post-Radmacher influx of new recruits as “the cavalry”, relieving the intense pressure of work.  Ayesha adopted an unusual human resources strategy for family law, choosing to recruit many lawyers from City backgrounds with sound knowledge of corporate and commercial law and re-train them as matrimonial lawyers. These ex-City types worked alongside newly qualified young stars and senior level lateral hires, combining forces to create a unique team: family lawyers who could really handle the cut and thrust of complex financial conundrums.

The firm has gone on to win awards, including the Halsbury Award for Law Firm of the Year in 2013, a win that saw Vardags pitched against some much bigger, longer established and multi-departmental firms. Spear’s Magazine named Ayesha among their Top 10 family lawyers in the country, again alongside others who have been in the industry much longer.

Not that there has been any resting-on-laurels. Earlier this year the Mail crowned Ayesha the ‘Queen of Divorce’. The firm has moved out of its quirky offices in the four-storey period property 8 Bell Yard, having outgrown it due to rapid expansion – at certain points lawyers were literally rubbing elbows – and are now ensconced in the bright, airy, decidedly modern 10 Old Bailey. Not that the signature Vardags décor has gone; the client area is enclosed in reclaimed mahogany panelling, cut to fit by Italian artisans and the meeting rooms are comfortably glamorous, bedecked in bespoke wallpaper and dotted with antiques. It’s a far cry from the corporate stereotype of the high-powered law firm, and helps put clients at ease when they come in for advice while going through some of the very worst of times that life has to throw at you. Finally pouring the entire firm into the new building has, Ayesha says, “removed the last road block” in its expansion. 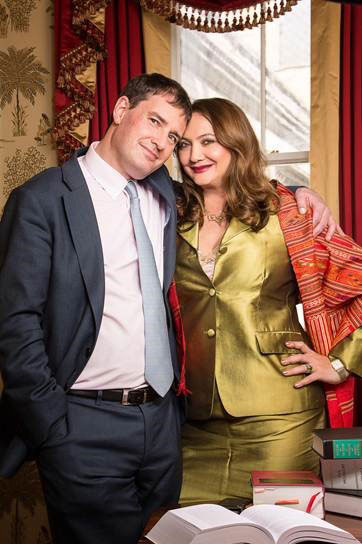 And amid the whirlwind professional success, things were also going well personally. In June 2014, Ayesha married partner and colleague Dr Stephen Bence, who heads up the business strategy team at Vardags and provides the financial and commercial expertise. They wed in Winchester, where they shared a home with their combined families in the Cathedral Close for some years. It was a lavish, glamorous affair that also managed to be warm and welcoming. Guests were treated to a musical extravaganza throughout the day: Bach, Byrd, Tallis and Purcell sung by a choir made up of their friends (Stephen was a Cambridge choral scholar) during the ceremony – held in the Cathedral quire – and Bollywood bhangra, waltzes and dance tunes provided by DJ and friend Jeffrey Louis-Reed at the reception, which was held in the quintessentially English garden of 1, The Close. There was of course, much champagne and revelry, a common feature of the Vardags social whirl, and friends, family and colleagues rubbed shoulders with QCs, judges, clients and the media.

In the wake of the wedding, business has been booming as usual. After returning from an action-packed honeymoon with dolphins and the volcano Stephen wrote his astrophysics PhD in Hawaii, Ayesha and Stephen threw themselves back into work with a renewed vigour. Through the late summer (even the usually quiet month of August) through to Autumn, the firm has signed more big clients with complex cases involving multiple jurisdictions and financial chicanery – exactly the sort of work that is the firm’s forte – leading to another hiring spree to cope with surging demand.

Much exciting work has come with the case of Malaysian beauty queen Pauline Chai, and along with it huge amounts of coverage in the national press both here and abroad. Ayesha and her team, including Managing Director Catherine Thomas and Director Georgina Hamblin, have been pulling out all the stops for a case that could result in one of the biggest divorce pay-outs in British legal history. The Vardags team won round one in October when they were awarded jurisdiction and forum in the High Court.

It’s been an extraordinary journey so far, and in many ways it seems like it’s just beginning. After all, the firm is still young, and Ayesha is never short of ideas for how it will innovate further in the future. For a start, she would like to see no-fault divorce become the rule in England, so that the culture of mudslinging that our current fault-based system necessitates can become a thing of the past. Ayesha has described fault-based divorce, characteristically, as a “system of acrimony which is the bedevilment of families.” She is also a strong advocate for children having continuing relationships with both parents post break-up and of private arbitration for high net worth cases to ensure utmost discretion and to relieve pressure on the clogged-up courts.  The next wave also involves international expansion, with a presence established in Dubai and the Middle East beckoning.

Thinking big has certainly paid off. Of her drive and entrepreneurial success, Ayesha says: “You have to be able to trust your instincts and willing to take a big leap in the dark.” Thanks to that fighting spirit and strong vision, the firm’s plum position at the cutting edge of family law ensures that it is likely to be a major player in any future reform of the current legal system. Whether it’s plans for new offices, developing overseas presences or ambitions for how to push forward to make family law work at its very best, Vardags is sure to be at the vanguard of that change.

Written by Charlotte Newman, journalist and publicist at Vardags