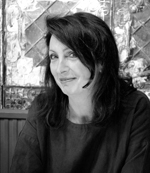 I am delighted to announce the appointment of Jane McIntyre as the Interior Design Editor of The Vintage Magazine.

Jane is perhaps best-known known locally for her inspirational design of the Stanwell House Hotel in Lymington which she transformed from a bland, uninspiring establishment to a cosmopolitan hot spot for both locals and visitors alike.

Originally a fashion designer, Jane spent many years producing theatre events with her partner and the company they set up together is now a global enterprise.

Throughout this period and in the years when she ran the hotel, she designed the interiors of many houses, some for herself, some for lettings, some for colleagues, always stretching herself to find new solutions.

Requests for commissions quickly followed, so once she had sold the hotel Jane gravitated more toward her lifelong passion for interiors and set up her current company.

Intuitive in her design, Jane has the ability to absorb the personality of the client and place it into a compatible environment, be it workplace or home.

Structural problems, lack of space and difficult briefs are her specialties, along with an inherent sense of colour.  She can work with taupe and white, but much prefers a palette of rich, chalky textures.  She is immensely enjoying being based in Winchester and is looking forward to working with The Vintage Magazine, as we are.

He was a part-owner and Managing Director of Debrett’s Peerage and Baronetage, which he acquired and rescued from extinction in 1976, and built into an international publishing company.