Does the thought of experiencing the lifestyle of aristocrats and celebrities both famous and infamous, appeal?  If so, then there is no grander setting then Cliveden House in Berkshire.  There have been three grand houses at Cliveden, two having the misfortune to have burnt down and the current Italianate mansion was finished in 1851.   Cliveden has been home to Princes and Dukes and from the late 19th century, the home of the fabulously rich Astor family.

William Waldorf Astor bought Cliveden in 1893 for $1.2 million and like all new owners of a property set about modernising and making it his own.  He remodelled many rooms, including the Great Hall installing the wooden staircase and in 1897 he purchased what is known as the ‘French Dining Room’ from Chateau d’Asnieres which conveniently exactly matched the size of the Cliveden dining room which today is used as a private dining room.

On a visit to Paris in 1897, William Waldorf Astor was shown the gilded panelling in Madame de Pompadour’s 18th century dining room at the Chateau d’Asnieres.  He purchased the ‘boiseries’, table and chairs and reconstructed the entire room at Cliveden.

Following the death of his wife, the 1st Viscount Astor no longer desired to live at Cliveden  so gave it as a wedding present to his son on his marriage to Nancy Langhorne.

This was the start of a glittering age for Cliveden – Waldorf and Nancy entertained royalty and the cream of society ensuring that Cliveden became the centre of European political and literary life with guests from Lloyd George and Churchill to George Bernard Shaw and Ghandi.  In fact Nancy herself became so interested in politics that she entered parliament  becoming the first ever woman MP at Westminster in 1919.

However in the 1930s with the changing tide and unrest in Europe their house parties were seen to have a more serious agenda.  Newspaper articles accused the ‘Cliveden Set’, as they had been dubbed, of being sympathetic to Hitler and directing foreign policy.

Although prominent Nazis received invitations, the guest lists were so varied that one was as likely to dine with Charlie Chaplin, whose outspoken dislike of the Nazi party was well known. Add such guests as Rudyard Kipling and Joyce Grenfell, Nancy Astor’s niece, to the historical house guests and you have a dinner party that would be a dream to attend.

In 1942, concerns about the cost of running the house and its upkeep prompted the 2nd Viscount Astor to donate the estate to the National Trust on the understanding that they could live there for as long as they wished but the gardens and wider estate were opened to the public.

in 1963 Cliveden was at the centre of a new political scandal, this time for the part it played in the notorious Profumo Affair.  Enough is known about this so there is no need to repeat the story here but suffice it to state, The Profumo Affair shattered the Astor’s lives and played a large part in their decision to leave Cliveden.

In 1966 The National Trust took over the management of the estate, opening it to the public.  For a time it has been an overseas campus for Stanford University but finally in 1985 permission was granted to turn it into a hotel.

The present leasees of Cliveden, Richard and Ian Livingstone of London & Regional Properties, are the owners of another fine and renowned hotel, Chewton Glen in the New Forest. Under their guidance and expertise and the management of Andrew Stembridge, Cliveden has been returned to its former glory, thus allowing anyone to briefly enjoy for as many days as their bank balance will stretch, the pleasures of this magnificent house.

Of course the exclusivity has been somewhat tempered by the fact that on arriving through the gates of Cliveden one joins a line of other cars entering the estate with the purpose of enjoying the 376 acres of grounds. 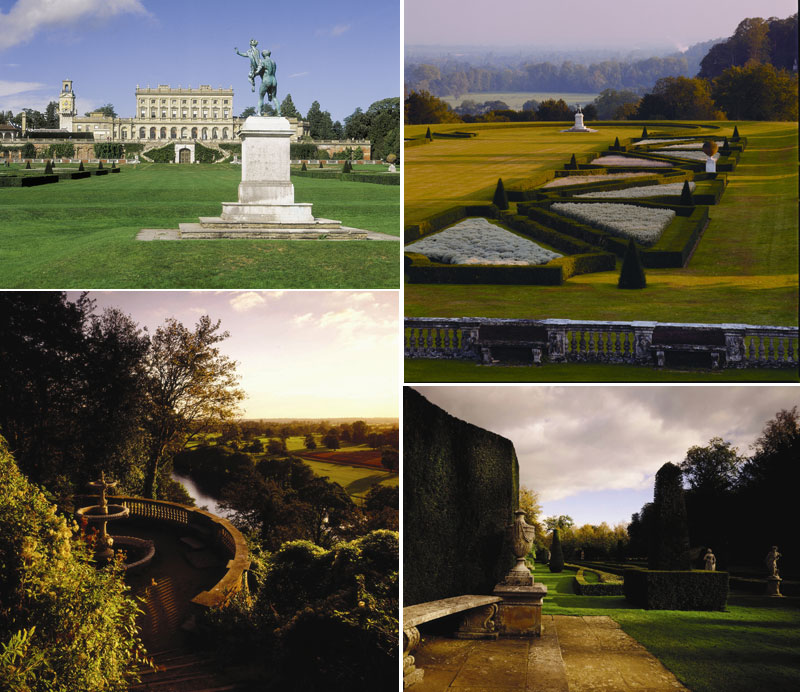 This is a necessary part of the continuing survival of Cliveden for without the National Trust these splendours would be lost to us all, as the up keep of such a property is beyond all but the super rich and would only be afforded by the likes of Russian oligarchs or Arab Princes.

In spite of the crowds one cannot fail to be impressed by the long drive to the grand entrance passing the Fountain of Love which was commissioned by the 1st Viscount Astor in 1897 from the American sculptor, Thomas Waldo Story.

On entering the hotel it is obvious how popular Cliveden is as a destination for visitors to England.  The reception area was very busy and although the staff were very welcoming you could tell that they were overwhelmed with the number of people all needing attention.

Our room was not ready for us at 3.00 so we took tea in the converted stable block, now called The Club Room which is only open to Cliveden Club members and house guests.  We relaxed over a pot of tea and were kept amused by the humorous interior design touches of horses’ legs ends to the tables and bar stools which are topped with old saddles.

The Lady Astor Suite with its own private terrace

Finally on being taken to our suite, we could not have been more delighted.  Each of the Cliveden’s rooms are named after illustrious personalities who have been part of the manor’s chequered history. Ours was the Henry James suite which must be one of their finest if for the view alone.

We could see for ten miles over the rolling countryside taking in the Thames and Cliveden’s iconic parterre and elegant gardens.  The room was very spacious with an open fireplace laid to be lit if we required and decorated with antiques and works of art and a hugely comfortable king size Cliveden bed.

We also had a separate dressing room and marble tiled bathroom.  The editor was particularly impressed by the powerful shower which matched the performance of his favourite showers at the RAC Club.

One word of warning – the previously mentioned 10 mile view which can be admired whilst relaxing in the bath can be so distracting that on standing up to vacate the bath one can easily forget the hoards of visitors enjoying the gardens below.  So to avoid one more scandal at Cliveden, do remember to draw the curtains before leaving the bath! 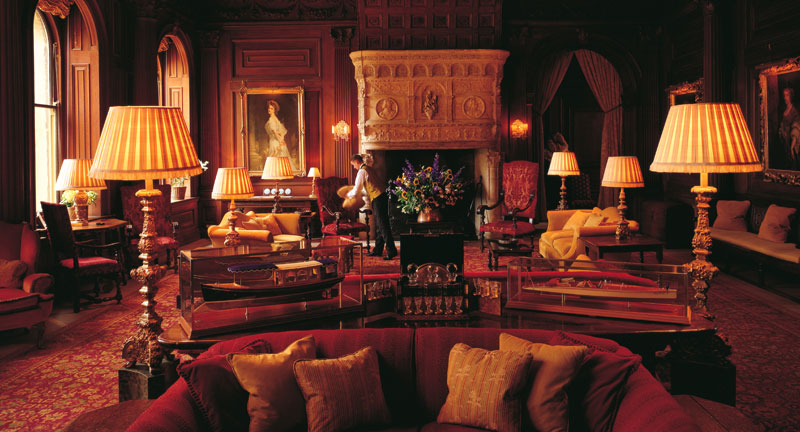 By 6 o’clock most of these visitors had gone and then the splendour of the main rooms could be appreciated in all their glory.  Pre-dinner drinks are served in the Great Hall in which there is a large 16th century fireplace bought from a Burgundian chateau, the walls are hung with tapestries and suits of armour placed around the room and to the left of the fireplace is a magnificent portrait of the young Nancy Astor painted in 1908 by the celebrated artist John Singer Sargent.

Our evening of delights started with a very large balloon glass of gin and, the now ubiquitous, Fevertree tonic, much favoured in all the best bars and hotels, accompanied by a delicious amuse bouche of cod mousse topped with crispy cod skin.  This worked its magic and we eagerly looked forward to our evening meal. 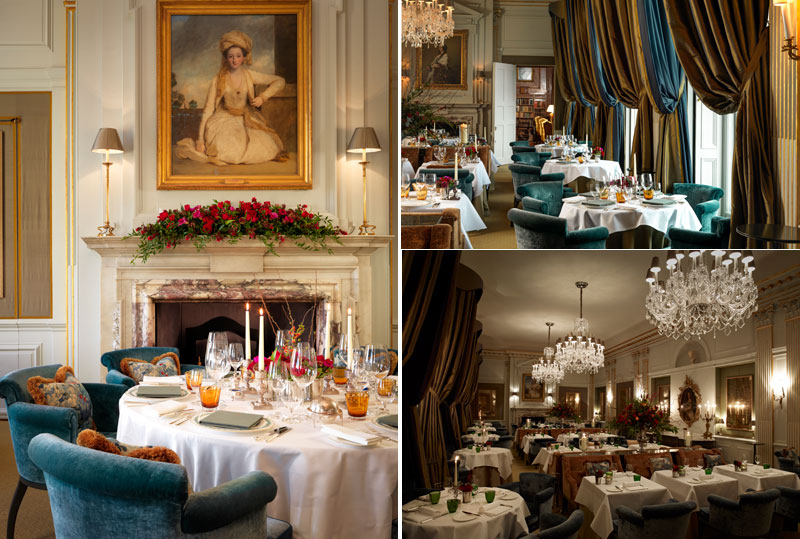 The Andre Garrett at Cliveden Restaurant 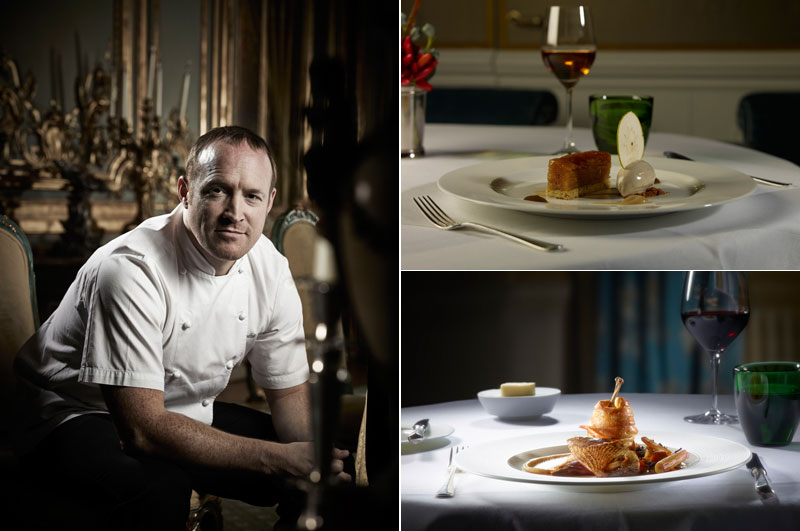 and Winner of the Roux Scholarship

The restaurant is now called André Garrett at Cliveden and it is under his direction that Cliveden has regained its place on the gastronomic map.  His food is wonderfully sophisticated yet light and delicate.  We chose the Tasting menu which consisted of eight courses, at the end of it one would expect to be struggling to finish, yet each course left us anticipating the next delicious morsel.

Tasting menus are such a successful way of sampling a chef’s talents.  There is also a choice of having wine paired to each course but we decided to have a glass of New Zealand sauvignon Blanc each, followed by a couple of glasses of Chilean Merlot.

Here is the Tasting Menu that we sampled:-

All prices are inclusive of VAT.

After this faultless meal we retired to our suite for an exceptionally comfortable night’s sleep in our king size Cliveden bed.  We awoke to what could possibly be the finest view in England, made more enchanting by a heavy frost defining the symmetrical patterns of the parterre and freezing in perfection the yew and box hedges, highlighted by the weakly shining sun as dawn broke.

It was with deep regret that we had to leave Cliveden after an all too brief stay but long enough for us to form the opinion that this is a place to return to and spend longer in order to take advantage of all that it has to offer. 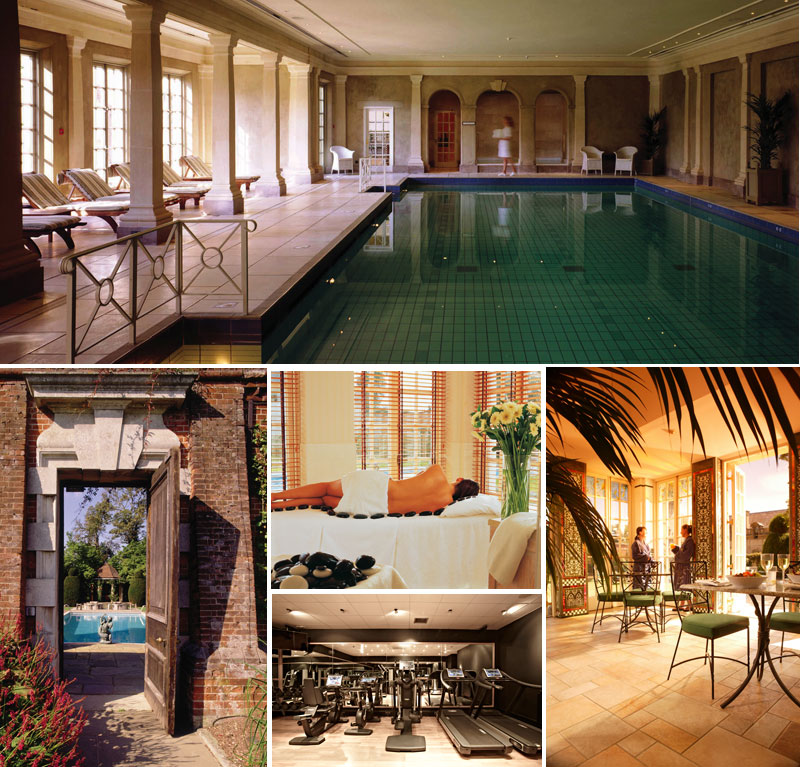 The luxurious pavilion Spa, the Spring Cottage and the chance to swim in that infamous swimming pool, take a trip on one of the Cliveden vintage launches, or just to explore the 376 acres of beautifully maintained National trust owned gardens and the acres of woodland, water garden and magnificent formal garden that surround the house.  A week should just about do it!

A final lovely thoughtful touch on our departure was a couple of bottles of water and prettily packed home baked biscuits placed in our car to keep us refreshed for our onward journey.

And the final word should go to Henry James since it was in a suite named after him that we spent a sumptuous night.  Although a renowned American novelist, he made his home in England in 1869 becoming an British subject just before WWI.  James was a frequent guest of the Astors at Cliveden and it inspired him to write:-

“Of all the great things the English have invented and made part of the credit of the national character, the most perfect, the most characteristic, the only one they have mastered completely in all its details is well appointed, well administered, well filled country house.”  Hear Hear!!