The Audi A6 3.0 BiTDI Allroad bridges the gap between an SUV and an estate, and at a shade under £50,000, this top-spec, third generation Audi A6 Allroad doesn’t come cheap.  However, Audi is confident its customers can not only afford it, but will add to that price from the long list of options, too.

When we recently road-tested the new Audi A6 Allroad TDI, we were hugely impressed by the new twin-turbo 3.0-litre TDI which is very quiet and very receptive, and like all Audis, this model is delightfully understated, and safely stylish.

Take a browse through the Audi photo gallery and you’ll soon see that Audi’s designers haven’t exactly stretched their imagination as far as the A6’s styling is concerned, but the interior is beautifully finished with high grade materials that make it a pleasure to drive or be driven in. 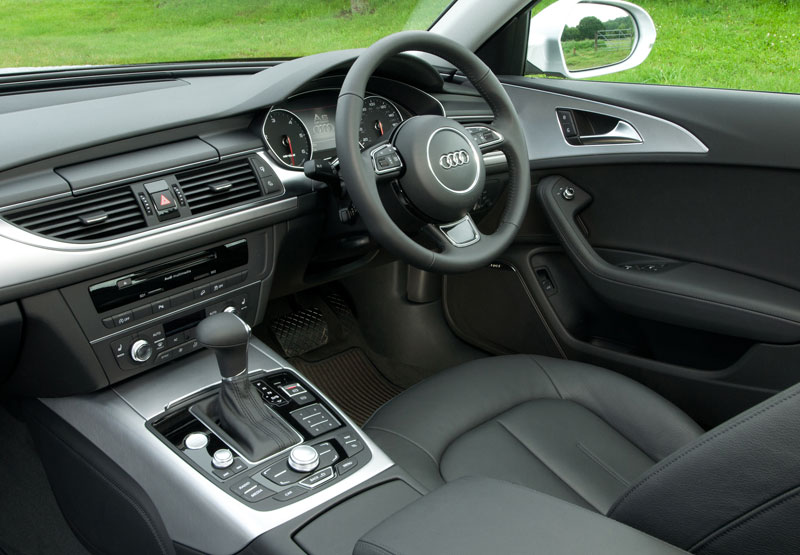 Our top-spec test car was Audi’s new and extremely impressive Bi-turbo diesel which goes from 0-62mph in 5.6 seconds (0.3 seconds slower than the equivalent A6 Avant), while it’s possible to progress  peacefully all the way to a limited top speed of 155mph.

And it doesn’t let you down in the corners either, living up to the original Audi Quattro’s reputation for great road holding and handling, and the dynamic suspension setting lowers it by 15mm from normal (the total adjustment in off-road mode is 60mm), so it handles as well as an Avant, with a better ride.

It is, of course, more expensive than the equivalent estate, and Audi doesn’t fit small engines to the Allroad, either: you’re limited to this bi-turbo, the normal 3.0 TDI or the 3.0 TFSI.  The lesser-powered diesel is the perfect compromise.

However, if you want the best, that is this bi-turbo. This is all the car you will ever need, and it goes places an estate car has no business going.

The A6 may already be the world’s biggest-selling mid-sized executive car, but it has been consistently outsold in key mature markets like the UK by bitter rival the BMW 5-series.

While the crossover-SUV market continues to grow, all-wheel drive estate cars are still something of a rarity.  But that hasn’t stopped Audi from producing a third-generation of the A6 Allroad.

According to Audi, the majority of this car’s customer base values its understated exterior design above almost everything else, which explains why Audi has created an updated-yet-conservative exterior for the new car.  It looks smart, contemporary and easily recognisable, but will not cause any alarm with Audi’s rivals.

Audi says the car is designed for those with high-end lifestyles, who attend equestrian events and like to go skiing.  So muddy car parks and icy roads are the Allroad’s territory, but it doesn’t offer the same cross-country ability or high-set driving positions of a full-blown SUV.

However, with Quattro air suspension – which can increase ground clearance to just over 178mm – it attempts to offer the best of both worlds. Its handling, thanks to a relatively-low centre of gravity, is sporty with none of the pronounced body roll that high-riding SUVs can suffer from when pushed hard.

We drove the Audi Allroad in some appalling weather conditions, and it proved extremely sure-footed, with the extra travel in the suspension provided a cushioned ride, while it always felt like there was grip to spare. There are a number of settings that loosen, or firm up the suspension, add weight to the steering or provide sharper throttle response.

The default Automatic setting delivered the best compromise for everyday driving. The Eco setting should prove useful on long motorway cruises though, helping to milk each gallon of petrol that little bit further.

Fitted with Audi’s excellent eight-speed Tiptronic gearbox it will still return 42.2mpg and emit 176 g/km of CO2.  It’s practical too, with 565 litres of boot space, which rises to 1,860-litre with the split-fold rear seats down – that’s 20-litres more than the A6 Allroad it replaces. With an extra 15mm height, there’s more headroom for passengers, too.

It would seem that Audi has a special understanding of its traditional and target market, and knows how and what to deliver in order to retain their loyalty. This a rare gift, and one to cherish.

Where to buy your Audi A6 Allroad Quattro?

The Vintage Magazine is delighted to have as one of its Business Members, The Ridgeway Group which specialises in Audi.