Every now and then, circumstances combine to enable you to do something you have always dreamed of, and, in my case, this happened recently, when I became aware that Aston Martin Lagonda were celebrating their 100th Anniversary, and had produced a ‘Special Edition’ Vanquish to mark the occasion.

Well, I have fantasised about driving a Vanquish ever since I saw one for the first time, and so, I wrote to Aston Martin, asking if we could test drive one in order to write a review for The Vintage Magazine, on the basis that if I was so interested in these beautiful cars, then my readers would be too! 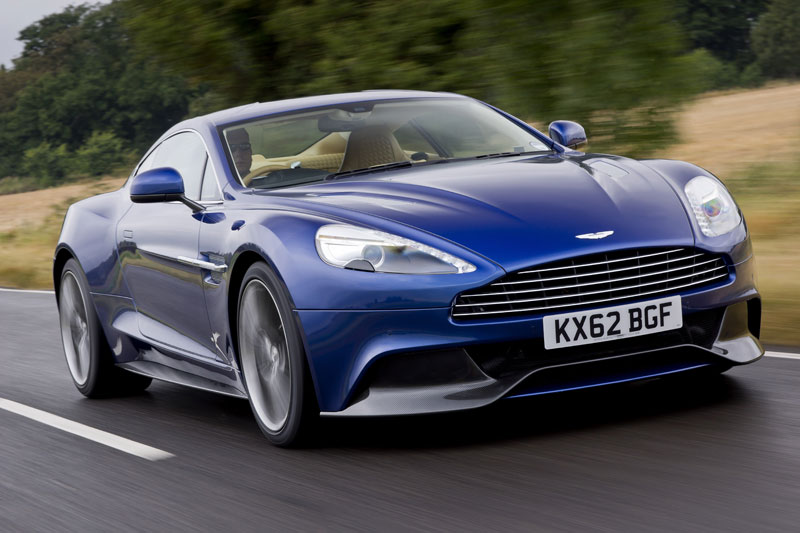 In fact, I wrote an article for The Field magazine in 2009, called ‘Objects of Desire’ when I had described the Aston Martin DB9 thus:

‘I yearn for an Aston Martin DB9 with its state-of-the-art technology and handling.  This is a true thoroughbred sports car which combines power, beauty and soul, the last quality being a rare commodity in modern cars.  What’s more, it sounds great, too – there’s certainly no Italian whining under this bonnet’.

Anyway, my request was passed on to the delightful Melanie King who runs Aston  Martin Media, and she kindly  offered me the car which you can see in the photographs accompanying this article, and so I accepted with alacrity, and we started planning what we  would do with this stunningly beautiful car.

We decided to combine test driving the car with writing reviews of two beautiful country house hotels; namely the Ellenborough Park Hotel, overlooking Cheltenham Racecourse, and Lainston House near Winchester in Hampshire, both of which provided the perfect settings for photographing this exquisite motor car.

So, we collected the car at noon on a Friday, and, having both done our ‘familiarisation’ with the man from Aston Martin, drove it through the Cotswolds towards Cheltenham, and arrived there rather belatedly at around 2pm, having driven very gingerly along all the small winding roads.

It was not until the next day, when having visited various friends in the Cotswolds, that we finally got onto the A40, and then the M40, and we could really stretch its legs, but such is the power of this 6 litre V12 that you are doing 70mph long before you realise it, and the feeling of all that extra power that you will probably never need or use is quite comforting.

However, the biggest surprise of all was that such a powerful supercar was so easy to drive, and my wife Chrissy absolutely loved driving it, and felt totally in control, which is a tribute to the handling qualities of this wonderful car.

I will leave the technical descriptions to our Motoring Correspondent, George Robinson, but it would be hard to find a more beautiful piece of Automotive Sculpture than this Aston Martin Vanquish.

Even the word ‘Vanquish’ has connotations of being victorious, and the dictionary definitions are:

To defeat or conquer in battle; subjugate.

To defeat in a contest, conflict, or competition.

To overcome or subdue (an emotion, for example); or to suppress.

Well, this car fits all those definitions, and it is difficult to suppress one’s emotions about a thing of such power and beauty, and I have no intention of doing so!The Vanquish lives up to all expectations, and I am grateful to Aston Martin for having enabled me to tick one more item off my ‘Bucket List’ 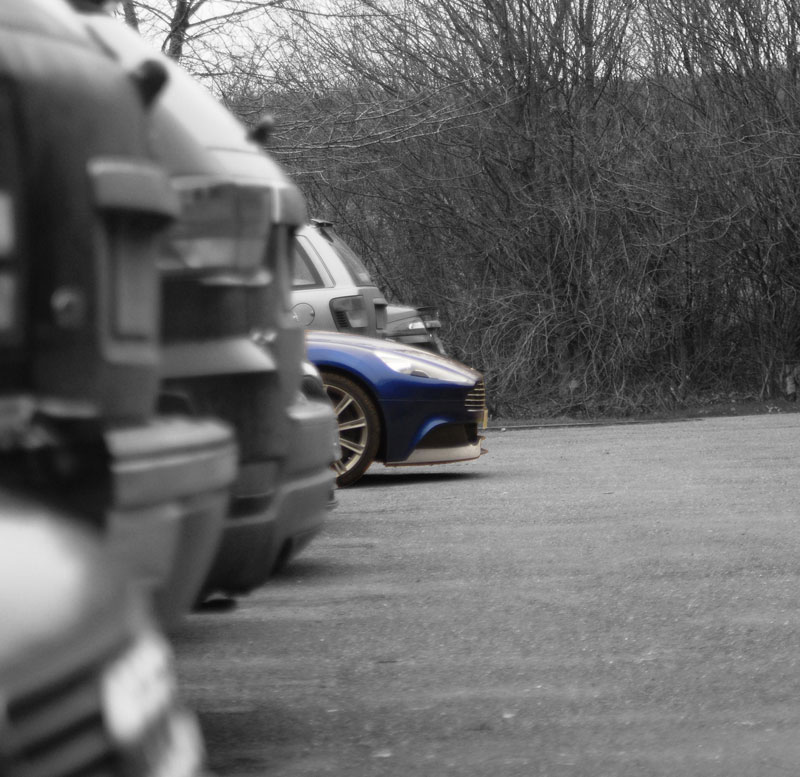 There is no need to assert one’s presence on the road in the latest Aston, this amazing machine does it for you.  Driving through Winchester on a cold Sunday afternoon, even those cultured souls admiring the architecture of this historic town were quick to turn their heads to the extraordinary growl of the Aston’s exhausts. This car has presence, it has style that is unmistakeably Aston Martin. There is extensive use of Carbon fibre which is both practical and attractive.

Aston Martin now in its centenary year is manufacturer of one of very few iconic British made Supercars.  Aston Martin has always been a big cut above in terms of the exclusive appeal of the great cars of the world.

The Vanquish is a thoroughly useable Supercar.  This incredible machine is most at home on the open road where its 0 to 100 KPH time of 4.1 seconds is a flick of the accelerator away from getting you out of trouble with other road users, but also a careless moment’s blink of the eye in taking you over the legal limit and into the notebook of a diligent traffic cop.  Beware, this car is so capable that it is easy to charm a relatively unskilled driver into a sense of security that readily belies the speed at which you may be travelling.

In the cabin all the controls come easily to hand. The seats are beautifully crafted to give just the right degree of support and to cushion the necessarily tight suspension.  Adjustment of the seats can accommodate the most diverse size and frame of any drivers that are likely to climb aboard.

The steering is perfectly weighted to make the car easy to manoeuvre in tight spaces and yet superbly sure footed at speed.  The six speed automatic gearbox was, for me the car’s least endearing feature. Very capable though I am sure it is there is something obtuse about such a fantastic high performance car being to some degree emasculated by a silky smooth auto transmission.

That is until you find the discreet paddles just beneath your middle fingers, thoughtfully punched with a small plus on the right and a minus on the left. The gearbox is easily switched from automatic to sequential paddles at the touch of the drive button.

This unleashes the Supercar within!  During my test drive I had a passenger with me so I was in full restraint mode but I dread to think of the consequences had the child in me been allowed out to play! The car has an unrestricted top speed of 183 MPH. If we were at liberty to explore this country beyond the 100 MPH threshold that is when things happen very quickly and previously straight roads develop serious corners. The only place to experience this is on a circuit.

These days there are many on track experience opportunities.  I am sure that it is a worthwhile investment to do this, particularly if Supercar ownership is for you.  It is most important that drivers of cars like the Aston Vanquish have a degree of ability to handle their machine. On British roads Supercars are so well within their ability that only two of the six available speeds are in fact absolutely necessary!

However with the wonderful V12 turning only very modestly at 70 MPH in sixth gear it is easy to hold a normal conversation with your passenger or to listen to the surrounding sound from the Bose system installed.

There were a couple of negative points in my view worthy of comment.  When you are placing your order be sure to sit in and if possible try a car with the same interior trim as you are planning to buy. The demonstrator we had was trimmed with pale cream leather which included an area of dashboard. The steering wheel was also trimmed in the same colour. 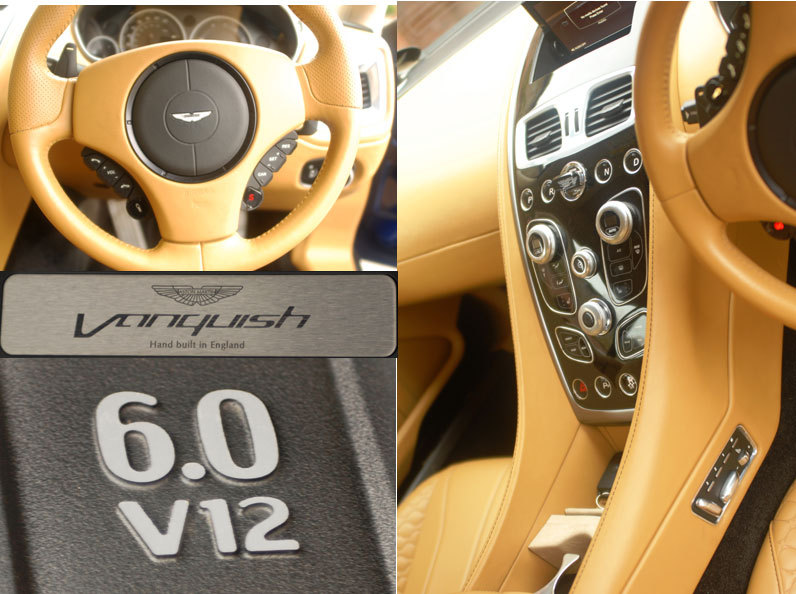 With a steeply raked windscreen, reflection particularly in low light was a real problem. This linked to the width of the car was a cause for concern when driving through country lanes.  At the factory we saw some beautiful examples on display which were trimmed with matt black and carbon on the top of the dash, I am sure there would have been no issues with reflection on these. This is a small and easily rectified observation.

There are some colours of trim which are best suited to the leather being used. We must also remember that the British taste for quality and understatement are not necessarily echoed around the rest of the world. I recall seeing a pearlescent white Rolls Royce with pink lacquered trim in Monte Carlo.

The car was for a Russian billionaire’s girlfriend. I am sure they were both delighted with it, right down to its gold embossed carpets. Even a footballer’s wife might have just gone for the white paintwork without the additional frills back here in Blighty.

Back to the Aston, believe it or not this car has a practical side to it.  There is adequate storage in the boot for at least two weekend bags. There are two back seats but really for smaller people unless the front seat occupants can spare some leg room for those relegated to the rear.

For a Supercar the access is very good and the seats not too low for equally easy egress. The seat backs are folded electrically to allow access to the rear seats, if passengers are not expected there is more than enough space here for plenty of shopping.

The problem is all you really want to do is drive it! This is certainly a car that begs to be used. Just to start the engine would stir the blood of the most cynical motoring correspondent.

Then of course you must drive it because it is bad for the highly advanced emissions systems of modern cars not to warm then through to be sure that the catalytic converters are doing just that.  Yes it is obligatory to start this car and then to run errands that will become more and more distant from home I suspect.

Will this Aston Vanquish become as iconic as the DB5 for example immortalised as the Bond car in the Sean Connery era.  Time will tell but I feel that the company is heading into its second centenary with a new age of greatness still to come.

We would like to thank Melanie King and her team at Aston Martin Lagonda for making our dreams come true.