Just over a year ago, we took an Audi A5 Cabriolet down to Cornwall for 5 days to put it through its paces, but the weather was appalling for all five days, so we did not experience the full pleasure of driving a convertible as not once were we able to have the roof down!

So, I contacted Audi again and explained that we would like to write a review of the latest Audi A5 Quattro Cabriolet, and they very kindly agreed to let us revisit this car.  The model we were lent was the A5 cabriolet, 2.0 TF SI Quattro SE 230 PS S Tronic finished in metallic Monsoon grey with a black roof and red fine Nappa leather interior.  The many extras increased the cost from a basic price of £37,750 to £60,940 on the road which may seem a lot but in comparison with its rivals, from Mercedes Benz and BMW it is cheaper and in my opinion a very stylish, luxury convertible that looks as good on the inside as it does from the outside.

If needed its top speed is 150 mph and a very respectable 0 to 60 in around 6.5 seconds, so giving plenty of power to propel the car up steep hills and provide a comfortable ride on rough roads whilst being responsive on twisting lanes, making it a perfect car for the sometimes taxing byways of Cornwall and if thst is not enough there is always the sports suspension option.

Starting our journey we packed the boot with all our essentials and were pleasantly surprised by the amount of luggage we were able to fit in the boot space in spite of, as is usual with convertibles, the reduction due to the roof mechanism.  However we were only two but if there had been two passengers, the story would have been different.  This is a two plus two but definitely not for any oversized adults and certainly not for four with baggage.  Thankfully that was not our problem.

We arrived in Cornwall in brilliant sunshine which continued intermittently for the next six days, and so we were able to take full advantage of this cabriolet and the efficiency and speed with which the roof mechanism worked making it very easy to drop and raise the roof whenever it was required.

There is nothing quite as exhilarating and liberating as driving a convertible and the sense of glamour that accompanies it.  This combined with Cornwall in sunshine is just about as perfect as it gets and a more beautiful place to be in the world would be hard to find.

We used the opportunity to visit some of the most iconic places along the north Cornwall coast which was the scene of many happy holidays of my youth, and then my children’s youth. 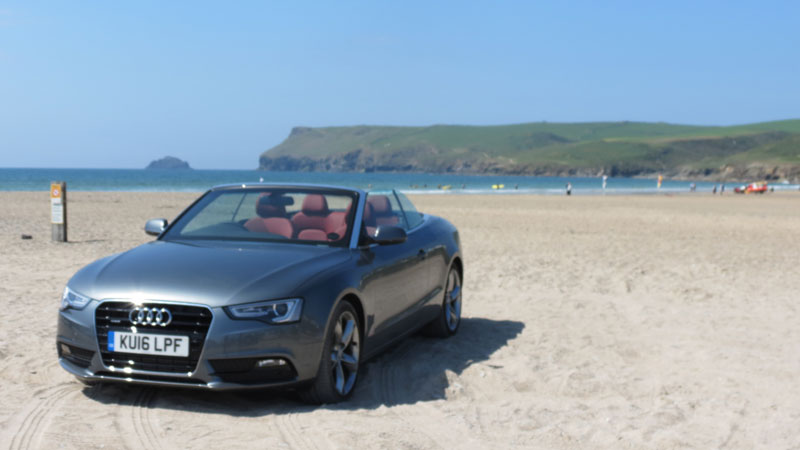 Thankfully a lot has changed since those heady days of having Cornish pasties liberally ‘dressed’ with sand, or chasing the ‘Mr Whippy’ ice cream van around Polzeath beach as it calculated the most promising areas to ply its trade. 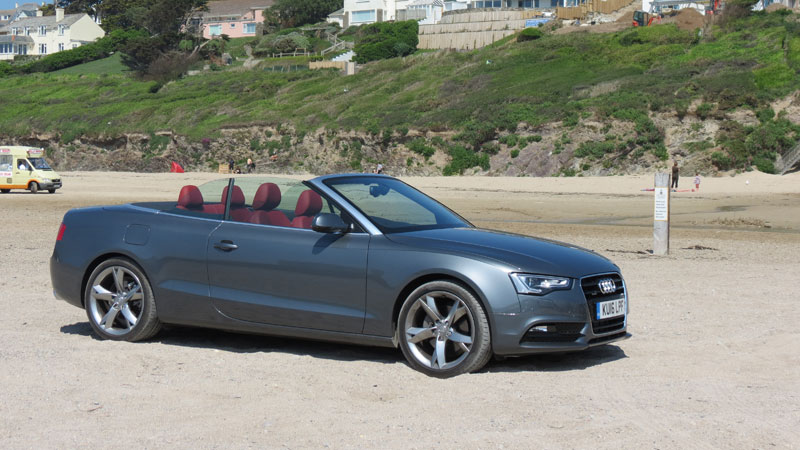 Over the past twenty years the entire area has undergone something of a Renaissance, with hundreds of modernistic house conversions, and ‘new build’ developments everywhere, many of them rejoicing in modern architecture at its best, with the frequent use of steel, glass and chrome, so that even the most modest bungalow, or cottage, now has an extended balcony with chrome and glass! 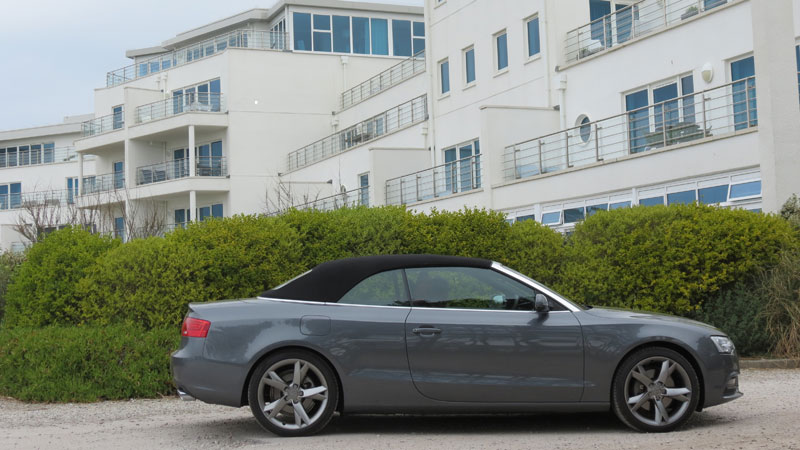 We were staying at a house on the St Moritz compound which surrounds the impressive new St Moritz Hotel, which is a massive Ocean Liner of a building on the site of the old and charming St Moritz Hotel, at Trebetherick 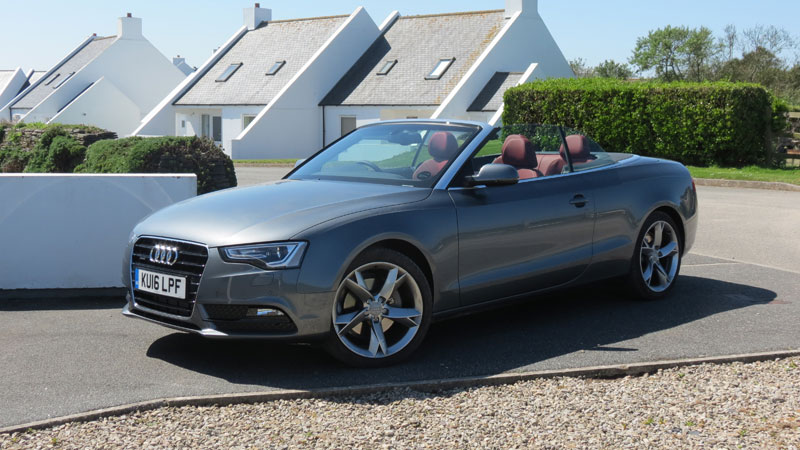 This complex enjoys superb views, especially of Daymer Bay, and Polzeath, with easy access to nearby Rock, and Padstow on the other side of the Camel Estuary.

My children may have very different memories, as  I was extremely unpopular for forcing all four of them to ‘rise and shine’ at 6am, so we could be on the first morning water ski run whilst the water was ‘flat’ and forgiving.  I remember that look of shock as they slid, painfully, into the freezing water, but the smiles when they had completed a good run.  This was followed by a good breakfast at the beach cafe where we planned the rest of the day ahead which  inevitably included surfing and swimming at Polzeath or Daymer, and taking the Ferry to  Padstow to go out in one of the small fleet of vintage wooden speed boats with names like ‘Jaws’ which roar around the bay giving the passengers fleeting glances of all these lovely beaches as they hung on for dear life!

Anyway, the Audi A5 Cabriolet took to the Cornish roads like a duck to water, and felt incredibly secure with its Quattro permanent 4 wheel drive, and its superb cornering. It reminded me why I am so fond of this ‘Marque’, and Audi just keep getting better

It also drew admiring glances from the extremely affluent residents of this part of North Cornwall, who have seen it all before, but were greatly taken by this elegant looking convertible. 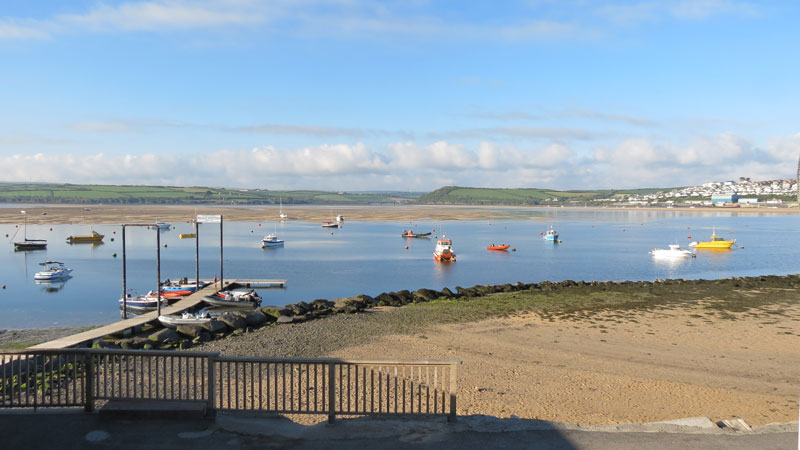 In Rock we had lunch at Nathan Outlaw’s The Mariner’s Public House and restaurant overlooking the Camel Estuary towards Padstow.  Nathan Outlaw used to have a restaurant in the St Enedoc Hotel at Rock, but has now progressed to a number of his own establishments, and is a worthy competitor to Rick Stein, although Padstow remains Rick Stein’s fortress, and the base of his fast expanding empire.

We drove the Audi A5 to Port Isaac, made famous as the location for filming Doc Martin, but delightful in its own right, to experience one of Nathan Outlaw’s other two restaurants.  One is a 5-star, fine dining experience, and the other a charming, but tiny fish restaurant housed in what must have been an old fisherman’s cottage, called Outlaw’s Fish Kitchen. We chose the latter as a more affordable option and for the new experience of ordering small, delicious plates of seafood that are cooked to order and come to the table when ready.  Actually the costs do mount up but it was well worth it to sample such delights as Monkfish Satay, Crispy Ling, Smoked Haddock Branade with sourdough toast, Baked Cod with fennel and spiced butter, all accompanied with a bowl of chunky chips.

There was no need travel far in Cornwall, because some of the best walks are along the cliffs and beaches between Padstow and Port Isaac, and we  walked to a different one each day, including the compulsive ascent of Brae Hill with its 360 degree views over the coast and inland to Brown Willie, the highest Tor in Cornwall. 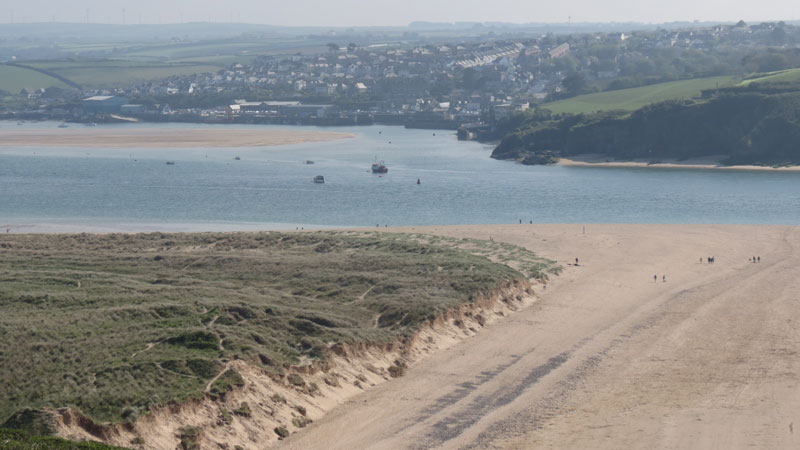 As we have found with all the Audis we have tested we were reluctant to return them and have been so impressed by the whole range of Audi cars thar we bought an Audi Q3 for our own use.