A six litre V12 four seater, four-wheel drive that does 208 mph and 0-62 in 3.7 seconds, this is the most powerful 4-wheel drive in the World.  Motoring does not get much better than this!

Of all the names that conjure up thoughts of power and style, Ferrari must surely be the most magical, so when we collected the new FF model, I was prepared to be amazed, but I still felt a quickening of the pulse when first I saw the elegant machine which was going to be mine for the next three days.

The FF, the Ferrari Four –  Four as in four wheel drive; Four as in the four comfortable seats that cocoon driver and occupants alike –  is a four-seater that utterly changes the whole GT Sports car concept, hailing a revolution in the automotive world.  Even the most cursory glance at the FF’s sleek Pininfarina-penned super car profile will tell you that.

Drive it anywhere, anytime, in any weather and road conditions, and you will see why it is so radical.  It may be a car that has elegance, beauty and art in its soul but there is much, much more to the FF than sophistication and allure.

It was in fact, designed specifically to tackle the roughest, most complex, and ambitious of driving challenges that the most discerning of drivers will want to set it; drivers who demand that cars give of their all, effortlessly and regardless of weather and surface.

The FF more than matches whatever you ask of it, because it is, quite simply, the most versatile car ever produced by the Prancing Horse technicians, engineers, designers, and mechanics.

Purists will be pleased to know that it is still the rear wheels which actually provide the power, with torque being transferred only to the front axle when required, and, even then, intelligently and predicatively distributed to all four wheels.

As if, on cue, to test the four-wheel drive system, it was pouring with rain when we collected this vision of beauty from Ferrari’s modern offices at Slough, and it was a Friday evening, so I set the drive conditions button to ‘WET’, which helped me nurse this supercar through the worst, Friday evening rush-hour traffic imaginable.

Having heard the warnings on the radio about congestion on the M4, we elected to go via Windsor, and cut across to the M3, which we managed eventually, and it was such a relief to get onto the M3, after an hour in bumper to bumper traffic which was not really what this car was designed for, but which it handled very well indeed.

However, there remained an undeniable, barely concealed desire by the car to be cut loose from this painfully slow progression, and given its head.

Having just driven for one and half hours in traffic, you could sense the relief when it finally had the motorway to stretch its legs, but we disappointed it again, by stopping at the first services to swap drivers, and my wife, Chrissy, took the controls for the remainder of the drive back to Hampshire, and after a brief period of acclimatisation, was clearly enjoying the experience, and the admiring glances from the home-bound commuters. 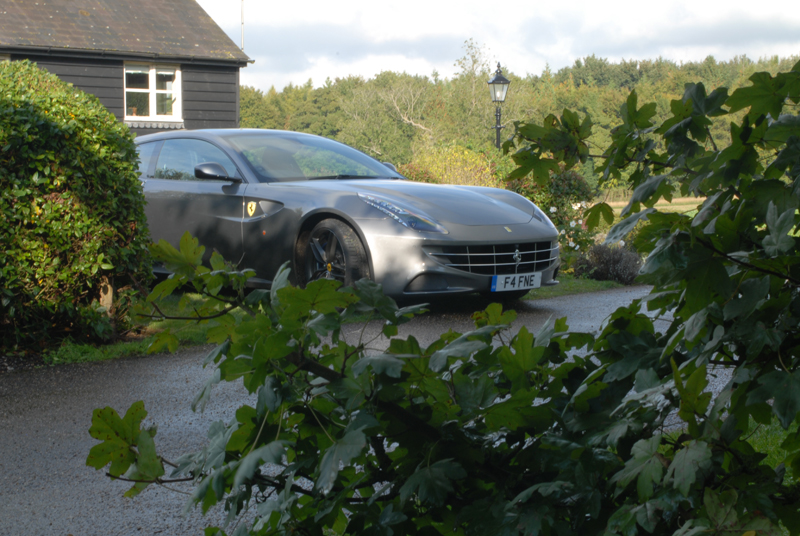 By the time we reached home it was nearly 7pm, and we had arranged to go out for supper with our neighbours, so we quickly changed, and were back in the Ferrari half an hour later, to collect them and drive to a nearby pub for supper, which was our first experience of having four people in the car, but it coped effortlessly, and our passengers were impressed with the comfortable rear seats, and so we arrived at the pub in style, parked right in front, and were greeted by all the locals wanting to have a look!

This was a typical reaction wherever we went in this Ferrari, everyone wanted to drive it, or just sit in it, as they admired the beautiful body, and the infectious roar of the V12 when you press the start button, which can turn heads at 100 yards, and there is no ‘quiet way’ to do it, so our neighbours had to endure me staring the engine at the slightest temptation! 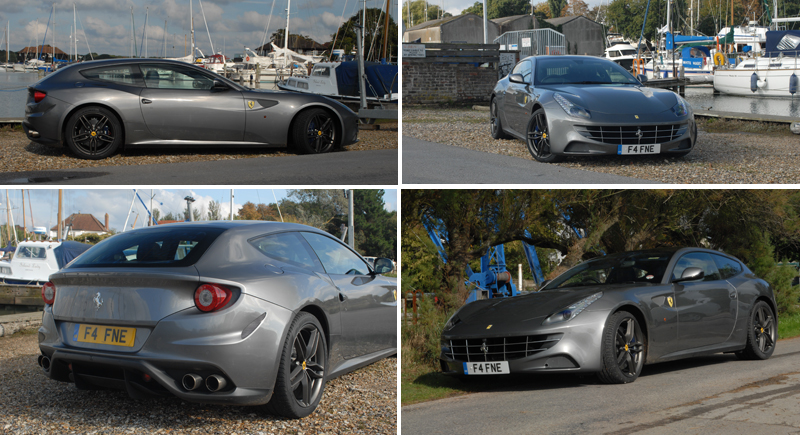 The next day was bright and sunny, but with the occasional shower.  We decided to drive down to Chichester harbour, with our photographer, Doug, and photograph our valuable ‘charge’ at Birdham Pool, which for those who don’t know it, is the most beautiful inlet in Chichester harbour, and as you will see from the photographs, we arrived to find a Cormorant, perched on a NO FISHING sign, intently fishing! 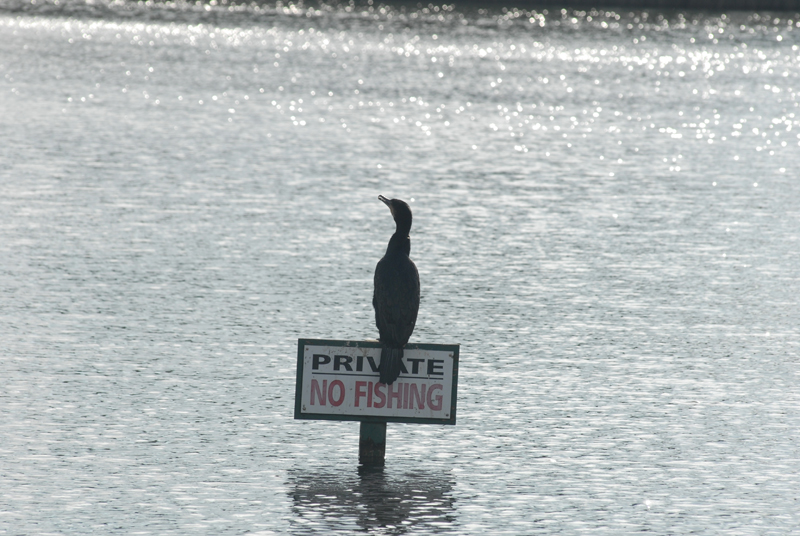 We were joined there by George Robinson, our Motoring Correspondent, and we all piled into the car to drive to one of my favourite pubs, The Star & Garter at East Dean, on the Goodwood Estate, where I have made it a tradition to take cars that we are test driving and to photograph the Barman, Adam, sitting in the cars smiling broadly at the camera; we should have enough to start a ‘Rogues Gallery’ soon!

Anyway, this gave George an opportunity to get a feel for the car, and his thoughts appear at the end of this article, but sadly, he did not have time to take the FF on a an extensive test drive, owing to his other automotive commitments, which involves the world of ‘go-karting’, but he drove the FF for long enough to get a ‘feel’ for it.

We then drove home and arranged to meet Doug Garvie the next afternoon at Hotel TerraVina, which we were due to stay at on the Sunday night, to write a review for The Vintage Magazine.  Sadly, it was raining heavily when we arrived at 3pm, and despite waiting or 45 minutes, the rain showed no signs of letting up.

As you will see from our review, we had a superb stay at Hotel TerraVina, and the next day I had to return this Prancing Horse to its stable at Slough, and I think it was as reluctant to go, as I was to take it, but sadly, all good things come to an end, and I delivered it intact, to my great relief, and we have been promised another extraordinary Ferrari, the stunning Spyder 458 convertible, (see images below) but not until next year, so watch this space!

Robert Jarman – Editor and Founder of The Vintage Magazine

In the meantime, you can read the expert’s opinion of the Ferrari FF below:

Of all the cars one might drive the only one that inspires instant mystique is Ferrari.  This is a marque that bares no comparison. The Ferrari FF is extraordinary in itself alongside its pedigree stable-mates.  The car is a V12 powered, 650 horsepower, 208 mile per hour, two door, four seater, four wheel drive, Coupé.

Beautifully styled by Pininfarina this car is beyond compare.  It has interesting traits however.  When I drove it we were four up, the most impressive element for me was the comfort of the rear seat passengers who were of a nervous disposition, but seemed unmoved by significant G force when rushed through the lanes of West Sussex at close to the legal limit, when in any less capable vehicle there would doubtless have been shrieks of fear from the rear!

There is no chance of slipping away quietly from a clandestine tryst.  Start the engine and it roars, “Ferrari” at the top of its voice. There is nothing like a V12 to give this effect. Exhaust note tuned to perfection, no compromise, no prisoners. 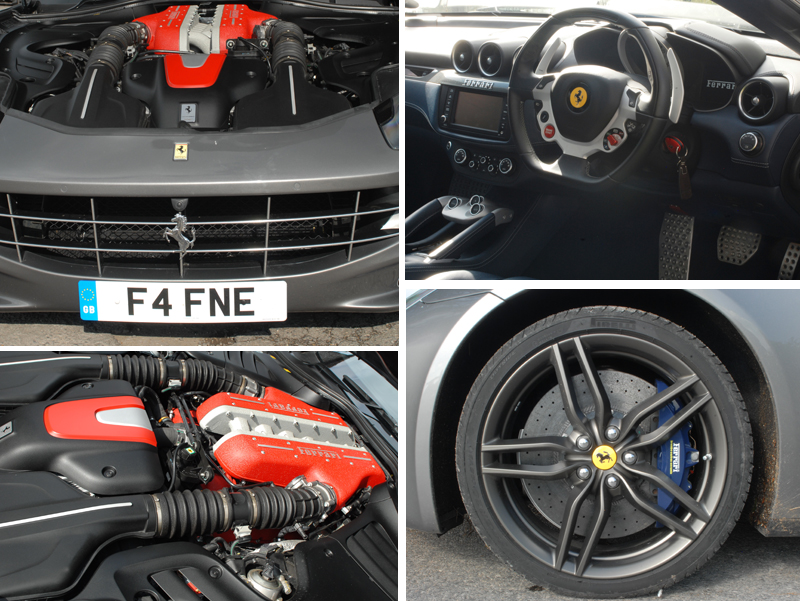 During my spell behind the wheel I had very little time to truly test the vast range of suspension settings and comfort levels on offer.

The gearbox can be left to its own very capable devices as an automatic or driven in full sequential mode with seamless gear changes due to a dual clutch system as used in Ferrari formula 1 cars.

The transmission to the wheels is electronically monitored to give the perfect level of grip as and when required, this is Ferrari’s first ever four wheel drive system, so innovative and unique that it carries a Ferrari patent. The FF is the only model in the range that has four wheel drive.

The end result of all these electronic aids is an extremely powerful car that can be driven safely by almost anyone. The downside of this is the consummate ease with which this car turns the most law abiding citizen into a speed limit criminal. 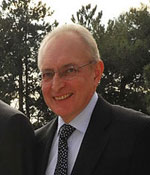 George Robinson has been competing at Go-Karting  since 1968, and was in the British Team in 1974.

He won three French Championships, and had the most podium finishes of any driver up to the year 2000 in the 24-hour ‘Le Mans’ race and was Second on the occasion on his  ‘comeback’ race.

George Robinson has been a freelance journalist since 1983 writing for specialist automotive magazines.,  and is now the Motoring Correspondent for The Vintage Magazine.