One of the many joys of driving such a car is that there is no need, or desire, to ‘speed’, because you are acutely aware of the huge reserves of power which await your command, and therefore, less likely to use them, but if the need arises, it is good to know that the V12 engine has a power output of 453 BHP and is capable of propelling 2.63 tons of luxury motor car from 0-60mph in 5.6 seconds!

However, I resisted the urge to prove this on A27 as we drove west towards Chichester and our secret destination.  We turned left towards the ‘Witterings’, the scene of so many happy days in my youth, and where I still walk and swim with my sons, and am looking forward to introducing to our grandchildren so they too can enjoy the miles of sandy beach.

However, what has not changed about the fabulous beach is that, 60 years on from my first visit aged five; it still has an ugly brick and concrete cafe serving the hundreds of thousands of visitors who come every year.

So, when we heard that some enterprising souls had opened a restaurant in the village of West Wittering, called The Beach House, I determined to see what it was like, and this was our ‘secret’ destination, and proved to be a real delight with its rather understated ‘Colonial’ style restaurant.  Just as the voice on the Satnav announced that we were at our destination, we pulled into the car park of the Beech House, and our guests appeared to be delighted with our choice, and we all thoroughly enjoyed the excellent lunch which followed.

Afterwards as we drove back to their house we were ‘spotted’ by several friends whom I am sure would never have noticed if we were in a Ford Mondeo!

This is the third occasion in three years on which I have been fortunate enough to be lent a Rolls-Royce model for us to review for The Vintage Magazine.  This one was made particularly special, firstly because it was a convertible, and also because it was my favourite colour combination of a Midnight Blue body with an almost pure white interior, created by some of the finest craftsmen in Britain at the frequently enlarged Rolls-Royce factory on the booming Goodwood estate. 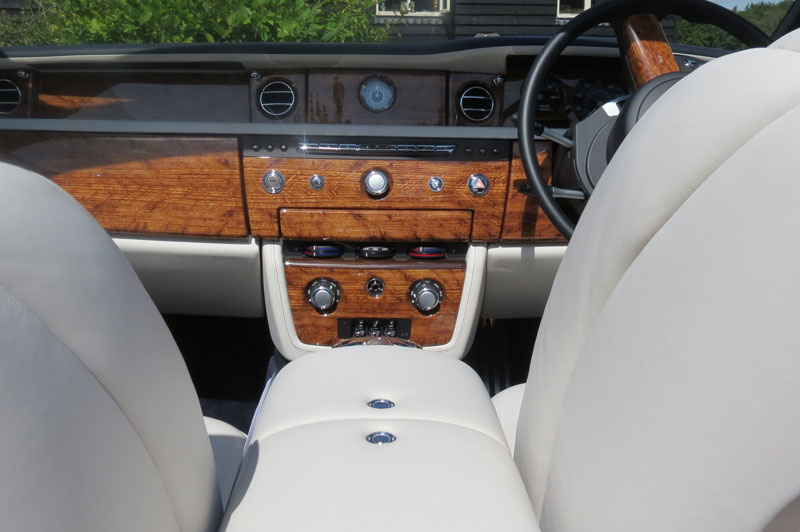 Complimenting the stunning leather interior was trim made of Barrel Oak, and, intriguingly, laid teak on the area which conceals the roof hydraulics, which makes you feel as if you were skippering a State-of the-Art ‘Riva’ speedboat on Lake Garda, but that is another item for the ‘Bucket List’.

Now it is time to mention a few minor criticisms if I may be so bold!  Firstly I must marvel at the aerial balletic performance as the programmed hydraulics fold the roof into the rear of the car within only 28 seconds – the pay off for this is that a lot of the boot space is taken up by this sophisticated machinery.  However there was still enough space for a case of champagne and a delicious spread for our dejeuner sur herbe.  The gazebo, table and chairs should be given to a support vehicle of more practical design!  I’m not sure what my point is here as who would want to spoil the lines of this beautiful elegant car for the sake of transporting picnic equipment.

However more seriously – one of the things I missed on this model was a hologram which we had on the ‘Ghost’ which we reviewed two years ago. This comprised of two circles suspended in space above the radiator grille, one showing the speed limit for the area, and the other showing the speed you were doing!

I loved this incredibly helpful bit of technology, and think it should be available on all Rolls-Royce models, both as a safety measure, and because it could have prevented me collecting so many penalty points on my license in areas where the speed limits can vary from 30 mph to 70 mph, and switch back and forth, so you are nearly always exceeding the limit.

And just one more thing; my desire to play some of my favourite CDs was thwarted because there was no CD player, I imagine because all Rolls-Royce owners are expected to have progressed on to MP3 players by now, but this ageing hippy likes to hear his favourite bands on a CD player, and very much regretted the absence of one on a car with a  basic price of £298,740 excluding VAT, and many ‘extras’,  and once these are added on, the ‘On the Road’ price rises to circa £400,000!  You would think that a £400,000 car might include a CD player!

Anyway, after the undoubted success of our Magical Mystery Tour, our next ‘outing’ was to the Jaeger LeCoultre Polo ‘Gold Cup’ Final at Cowdray Park at Midhurst, which attracts enthusiasts from far and wide, and we could not have chosen a better setting for our loan car, than on a gentle slope looking downhill towards the main Polo Ground, and, as the photos show, we took my step daughter and grandchildren, and enjoyed a very good picnic on a perfect summer’s day, washed down with my favourite Provencal Rose, from Chateau Minuty, which overlooks  the Bay of St Tropez. 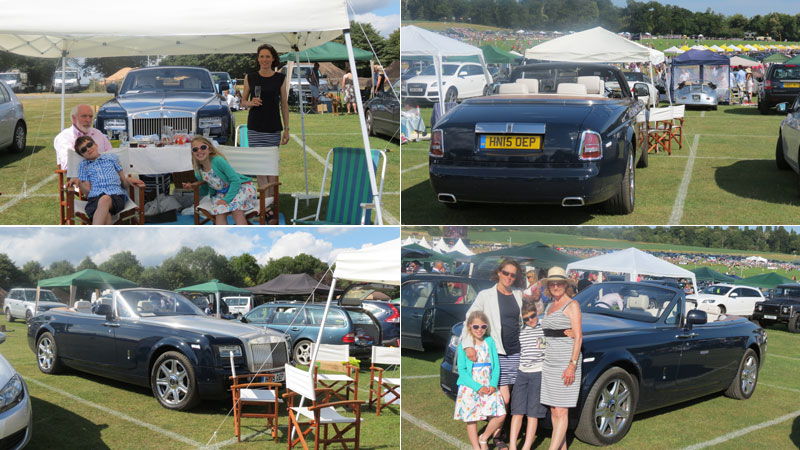 The final was thrilling, and the whole place creates a certain ‘Nostalgia’ for an England of long ago, when people were polite to each other, and enjoyed the  simple things in life, including the wonderful ‘backdrop’ of the Cowdray Estate and the mature parkland surrounding the Polo Grounds, which is about as English as you can get.

As for the Gold Cup Final, this was won by King Power Foxes who beat a UAE team 14-8 in a thrilling final watched by 14,000 people, and reminded you of how civilised a country we live in, and how beautiful it is.

Seeing so many Rolls-Royces at the Polo reminded me of that wonderful poem by Hillarie Beloc about guests arriving for a Garden Party at Buckingham Palace:

“The Rich arrived in pairs and also in Rolls Royces; They talked of their affairs In loud and strident voices… The Poor arrived in Fords, Whose features they resembled; They laughed to see so many Lords And Ladies all assembled. The People in Between Looked underdone and harassed, And out of place and mean, And Horribly embarrassed.”

However, there was no such embarrassment at Cowdray Park which entertained an enthusiastic audience, and it is evident that Polo has become a much more democratic sport, with many knowledgeable followers, and it is now a truly International sport with its cosmopolitan entourage.

After the presentations, we left the ‘young and the beautiful’ to enjoy what looked like it was going to be a mammoth Barbecue, and party into the night, whilst we drove home, heading west along the A272 enjoying the evening sun with the roof still down. 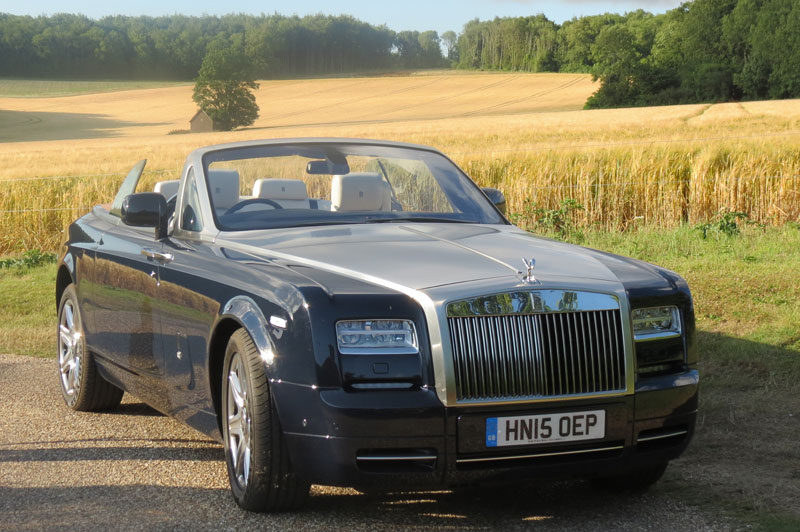 When we got home, the fields of barley surrounding our house were gently waving in the gentlest breeze, and so we took a few more photos in that wonderfully soft evening light, to complete our record of a exceptional weekend, with an exceptional motor car.

Our stunning Rolls-Royce is only one of thousands produced each year and exported all over the world, thus reinforcing Britain’s position as the biggest producer of luxury cars in he world, and the fast expanding workforce at Rolls-Royce is testament, if it were needed, to the extraordinary success of Rolls-Royce under the ownership of BMW

Rolls-Royce Motor Cars sold a record number of cars last year, breaking through the 4,000 mark for the first time in its 111-year history.

They sold 4,063 cars, up 12% on last year, and marking the fifth consecutive year of record sales which increased by almost a third, by 40% in Europe and in the Middle East by 20%,

This is just part of the overall picture, where there are several luxuries ‘marques’ enjoying huge success, including Jaguar/Land Rover, VW/Audi, and Daimler Mercedes-Benz

Daimler, maker of Mercedes-Benz and Smart-branded cars, enjoyed a rise in sales of 11.4 percent in 2014, to a record 1,739,854 cars, thanks to a 30 percent sales jump in China and 25 percent higher registrations of Mercedes compact cars.

Meanwhile BMW, who own Rolls-Royce, enjoyed a worldwide 7.6 per cent increase in sales over the same period in 2013, when it was the biggest selling premium car maker in the world. The Group sold 1.96m vehicles in 2013, compared to Audi’s 1.58m and Mercedes 1.46m.

There appears to be an international boom in the appetite for luxury cars, many of which are made, assembled and/or ‘finished’ in Britain, which is great for our economy, and bodes well for the future, and it is comforting to know that Rolls-Royce remains the car of choice for the new rich, and is the most tangible ‘badge’ of their success.

Finally, I would like to thank James Warren, the Communications Manager at Rolls-Royce, for his kindness in allowing us to drive this superlative machine for a long weekend, and we look forward to test-driving some of their newest models soon, including the Wraith.

Robert Jarman, The Editor and Founder of The Vintage Magazine 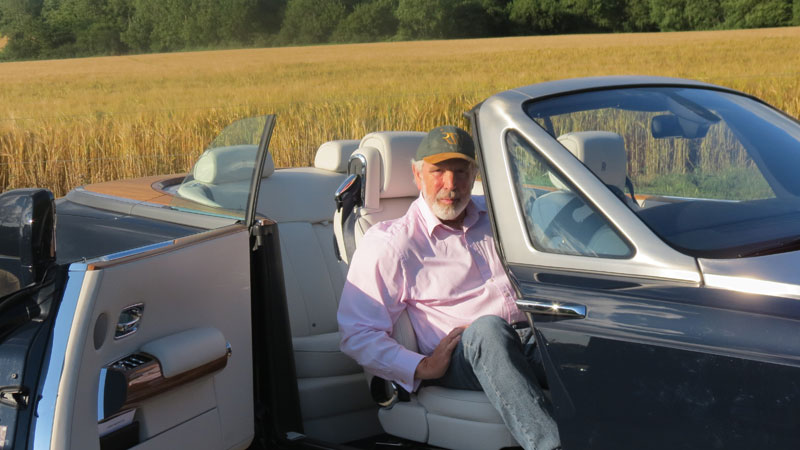