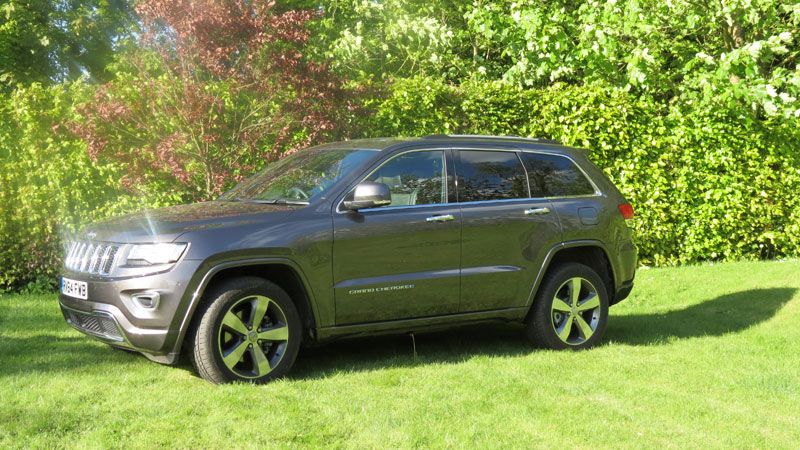 The JEEP currently sells around 2000 cars per annum in the UK, so it has some serious catching up to do, but the good news is that the new Grand Cherokee is longer, wider and lower than its predecessor, and much better looking, but remains very ‘American’ in its design, and styling.

However, the all-wheel drive, and high and low ranges are selected at the touch of a button, and its performance ‘off road’ is right up there with Range Rover, and its other competitors.

In the ‘Overland’ model which we had, you get a superior trim, you also get air suspension (only an option on the Limited model) and Select-Terrain, but it’s on the open road where the new Grand Cherokee makes its best impression, with its hugely improved road holding, and its ‘’off-road’ capabilities are beyond doubt.

On motorways, the car’s new 237bhp 3.0-litre V6 diesel offers acceleration on a par with its rivals, through a smooth five-speed automatic gearbox, but at 27.4mpg, ‘economy’ is not a word which one would use about this latest model.

The old Grand Cherokee used a Jeep chassis and a Mercedes engine, this one has turned the concept on its head by borrowing the platform from the 2012 Mercedes M-Class and powering it by its own engine, or at least one produced for Fiat, the majority shareholder in Jeep’s paren, Chrysler..

This Grand Cherokee is 146 per cent more structurally rigid than the last, which gives some idea of how behind the competition it had fallen. Why does this matter?

Because without a stiff chassis, your suspension can’t work and the ride and handling suffer, and noise, vibration out of control. A run around the block in the old Grand Cherokee will illustrate this point nicely.

The ‘new’ engine is built by VM Motori and apparently developed by Fiat, it has not only exactly the same 2987cc capacity as Mercedes’ 3.0-litre V6 .

But this apparently state-of-the-art engine was originally handicapped by the need to run through a five-speed automatic transmission. Given that, its emissions and economy figures are even more impressive than is initially apparent.

That engine will account for the vast majority of Grand Cherokee sales in the UK.

Jeep has not followed its rivals in doing away with the low-ratio transfer box, but height-adjustable air suspension – essential for anything more than the lightest of off-roading – doesn’t feature on the entry-level model. Manually locking differentials aren’t available, either.

Nevertheless, different off-roading modes are selectable via a rotary ‘Selec-Terrain’ dial. And if you think that this sounds like Jeep is taking a leaf out of Land Rover’s ‘Terrain Response’ book, then that is no bad thing.

In mid-2013 a revised Jeep Grand Cherokee was launched, which included a new eight-speed automatic transmission, which improves efficiency by around 10 per cent, which puts the Jeep on a more competitive footing with rivals like the six-cylinder diesel Volkswagen Touareg and BMW X5.

As for the styling changes, the front of the Grand Cherokee features a shorter upper grille, slimmer headlights, more pronounced fog lights and a front fascia that’s been slightly elevated. 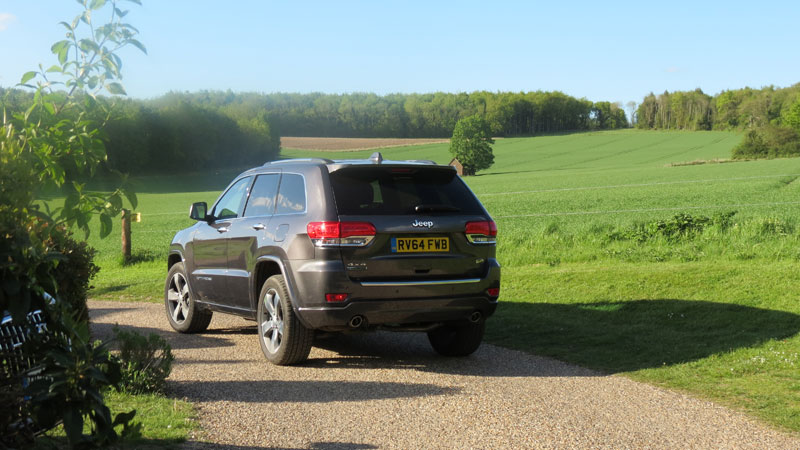 It is a huge improvement on its predecessor, but, despite all these improvements in handling and the  greatly improved interiors, it still lacks the sophistication of a Range Rover, for instance, but it offers a credible alternative 4WD at a much better price, and does exactly  ‘what is says on the can’.

Jeep says the car, is better value than any of its main rivals, but at £43,995 it’s in the same price range of many of the premium SUVs, where value is not always of the utmost  importance.

However, Jeep’s sales hopes of 2000 Grand Cherokees alone in a full year look far more attainable now that they have FIAT behind them, and Fiat also have the ability to bring some Italian style and European sophistication to this reliable workhorse, whose ‘off-road’  handling is beyond doubt.

However, we think Fiat would be well advised to send some time researching the UK market before any dramatic re-vamp, and in the meantime to concentrate on making  the Jeep Grand Cherokee the ’Best of the rest’.

Robert Jarman, the Founder and Editor of The Vintage Magazine