Our Business Member, The Ridgeway Group suggested we try out the new Mercedes E250CDI Sport Cabriolet and, as is our custom, we had to think of somewhere  to take this gleaming white charge to test its abilities.

Since it was August and the holiday season was still in full swing, I decided to check-out a beach restaurant I had heard about called Pebble Beach, which although conjured up images of California, is in fact at Barton-on-Sea on the coast along from Bournemouth.  Pebble Beach has been well reviewed in the national press, so we thought it was worth a visit.  Thankfully we were not disappointed and you can read our review in a separate article by clicking here. 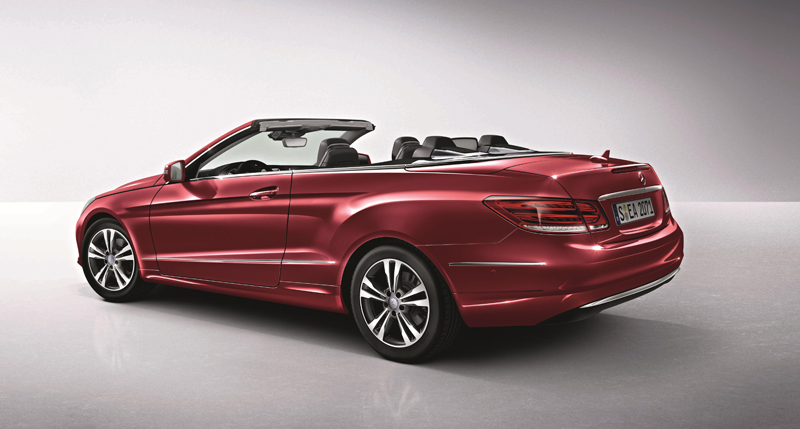 Although August, we were unlucky with the weather and arrived to collect the Mercedes in pouring rain which continued all through our lunch so we were unable to enjoy the full open top driving experience on our journey to the Pebble Beach Restaurant.

However apart from having to firmly keep the top up we were able to test this new  Mercedes E-Class Cabriolet which has just been updated in line with the recent changes to the rest of the E-Class range.  There are now four cylinder S220 and E250 diesel engines and we were driving the latter.

The changes are not immediately obvious, but the old ‘quad’ headlights have been replaced by single headlight lenses and there is a sporty grille and new bumpers.  Unfortunately as the model we had been lent was in gleaming white, my companion rather irreverently commented that on viewing the car front on, it reminded her of the helmets worn by the storm troopers from Starwars.  But of course that is purely her opinion!

However, the real changes to this model are under the bonnet.  The new engine improves CO2 emissions and the improved electronic steering system makes the car not only  impressively quiet but also feels very steady and composed at high speeds with the added bonus of cutting fuel consumption.

The interior is well finished, ours came in red leather, which looked good with the brilliant white paintwork and with this new E Class Cabriolet comes much more equipment than before, including an online Satnav as standard, along with a DAB radio, and an ‘Active Parking Assist’ system.  All this made for a most enjoyable journey to our lunch destination.

We emerged from our beachside restaurant to brilliant sunshine so we were at last able to test the efficiency of the electronic hood.  The hood is made from an acoustic fabric which when up had been very efficient at keeping out unwanted noise.  It took around 20 seconds to fold itself back which, as I understand it, is quite slow by modern standards but this is nit picking somewhat.  With the roof down we sped off west along the coast to investigate Sandbanks and Poole harbour.

There was just the two of us but of course this is officially supposed to be a four seater rather than just a 2 plus 2.  However we could tell that two over-average sized adult would be rather cramped in the back, but what is impressive is a clever bit of technology developed by Mercedes called ‘Airtrap’ which allows the rear seat passengers to remain as unruffled as those in front, thus avoiding that Bridget Jones moment upon arrival at ones destination.  The secret is a combination of a small flap on top of the windscreen and a deflector between the rear seats, which both raise to defect air over the cabin.  There is no need to press any buttons as this system activates automatically when the speed exceeds 25mph.

Comparing this to the Maserati Grand Cabrio Sports which we had tested earlier in the summer when there had been two adults in the back, reminds me that they certainly did not arrive ‘unruffled’ but had had so much fun that it really was not an issue!  However perhaps if you advertise a cabriolet as a four seater then more design thought should be put into protecting the rear passengers as Mercedes have done in this model.

I was eagerly anticipating our arrival at Sandbanks having very happy childhood memories of staying at The Sandbanks Hotel with my parents, and lo and behold there it was, still standing guard over the Sandbanks Peninsula, which is now one of the most expensive bits of real estate per square metre in the world, not just the UK.

This was the natural habitat for the Mercedes E250CDi Sports Cabriolet, and it looked very much at home outside The Haven Hotel on the western end of this sand spit, where the chain ferry takes cars and pedestrians across to Studland Bay and the great beach there, and the Isle of Purbeck.

As we left, we drove the ‘circuit’ around Sandbanks and looked at some of the astonishing houses which have sprung up over the past ten or fifteen years, which reflects the big money which has poured into this tiny sand spit and our gleaming Mercedes Cabriolet would have looked the part parked on any of these drives!

The cost of the Mercedes E250 CDi is from £44,100 and this is the technical specification for those that understand such things:-