When we were planning our recent visit to the iconic Badrutt’s Palace Hotel in St. Moritz, click here  to read the article, we wanted a car which could live up to the occasion, and we considered all the ‘usual suspects’, but the more we thought about it, the more we were drawn towards one of our favourite Sports cars, the Maserati Gran Cabrio 4-seater which we had road tested a year ago, and loved.

So, we approached Maserati Cars, North Europe, to see if they would help, and they immediately embraced the idea, and offered us their stunning new Maserati GranCabrio MC. 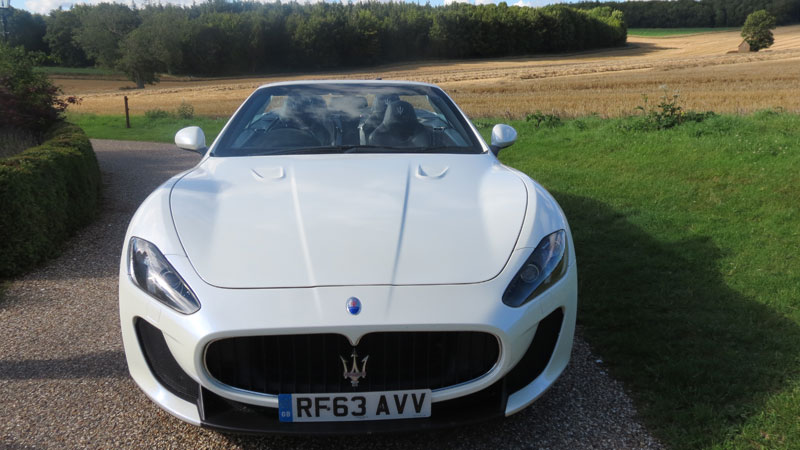 On the morning of our departure the car was delivered to our door.  We could hear the impending arrival by the unmistaken low roar of the Maserati as it was being driven slowly down the mile long drive to our house.  We were immediately impressed; the paintwork was a pearlised white which, depending on the light, changed shades of white.  Although very similar to the GranCabrio Sport we had driven before, the MC model is 48 millimetres longer.  This may not seem a lot but it does allow for a front end which has been inspired directly by the MC Stradale with a profile designed to optimise the aerodynamic lift and flow. 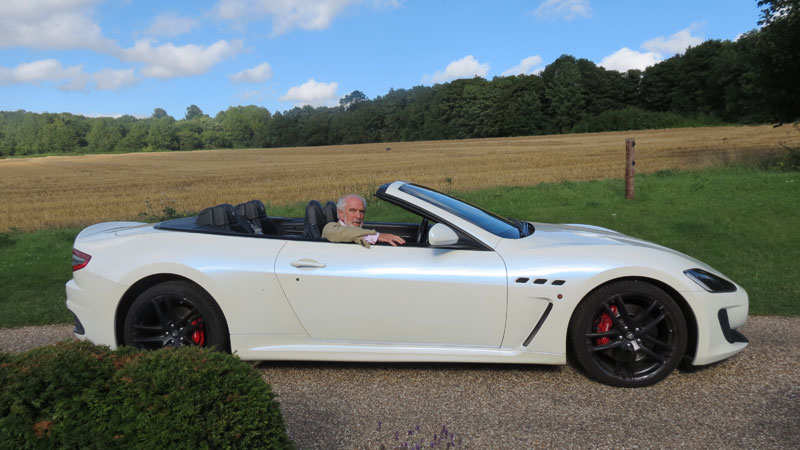 The Maserati GranCabrio MC ready for its long journey to St.Moritz

The GranCabrio MC has a sporty and aggressive look whilst maintaining the strengths and characteristics of a true Grand Tourer, making it ideal for long journeys such as ours’ to St Moritz.  The design is a combination of aesthetic and practical elements, and, for my money, I think Maserati has cleverly managed to combine high performance, and stylish looks to create a sports car which is more instantly recognisable than its competitors, including Ferrari, Aston Martin, and Jaguar, all of which are beginning to look very similar. 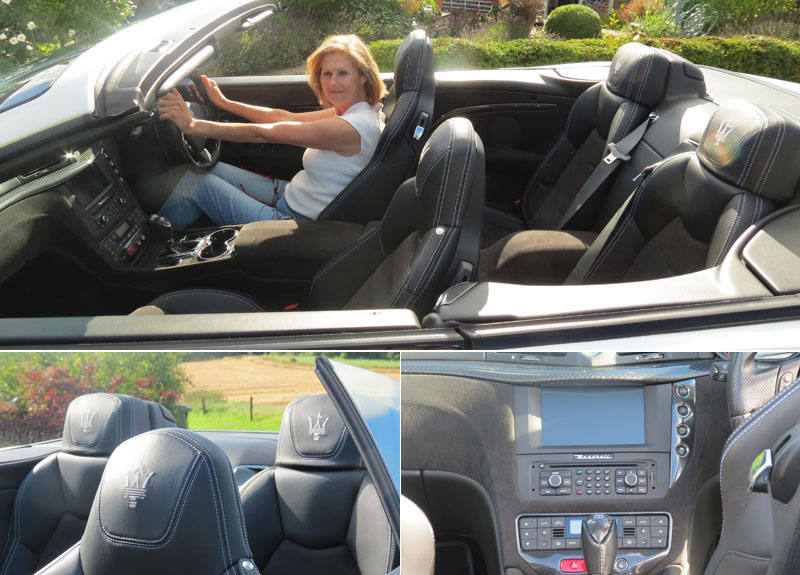 The interior of the GranCabrio MC pays particular attention to ergonomics. The seats are designed to be both aesthetically pleasing and functional, and the rear seat passengers have not been forgotten, having 20 mm more legroom than in the earlier, GranCabrio models.  But we have to be truthful here, the extra leg room is an improvement if four adults are going out for the day, but to contemplate an overnight trip for four is not viable as the back seat area is required for luggage unless four are prepared to travel with just the bare minimum!   Fortunately our trip to Switzerland was just à deux so we could make use of every available space.

The lack of boot space is not really a criticism but just an observation.  There are plenty of cars which offer, more practical solutions but few with such elegant, sporty lines as the Maserati Gran Cabrio MC – I for one am happy to make this sacrifice if it means I can drive such an exciting car.

So there is no doubt that we had the perfect car for our long road trip to St. Moritz – a journey of 800 miles each way which we planned to take two days to cover.  It was mid August when we left our home near Winchester and the sun was actually shining so the first part of our journey to Folkestone to catch the train through the tunnel was taken with the roof down on the Maserati.

Here I must praise Eurotunnel as we arrived early for our booked train but we chose an earlier crossing which we paid a small increase for and even though this was only a week after the delays caused by the migrant problem, we boarded our train exactly on time and arrived in Calais with no interruptions.

Of course it is always a delight to get onto the roads in France and this time was no exception.  We arrived at our first night’s stop at St.Quentin well in time for dinner.  However there is not much for us to praise in this Northern French town but it allowed us to get a good night’s sleep before an early start the next day to start eating up the miles on our way to our next stop at Colmar on the German/ French border.

Colmar is the third largest commune of the Alsace region in north-eastern France and very pretty too.  We posed the Maserati GranCabrio MC on the bridge in the area known as Little Venice, for obvious reasons. 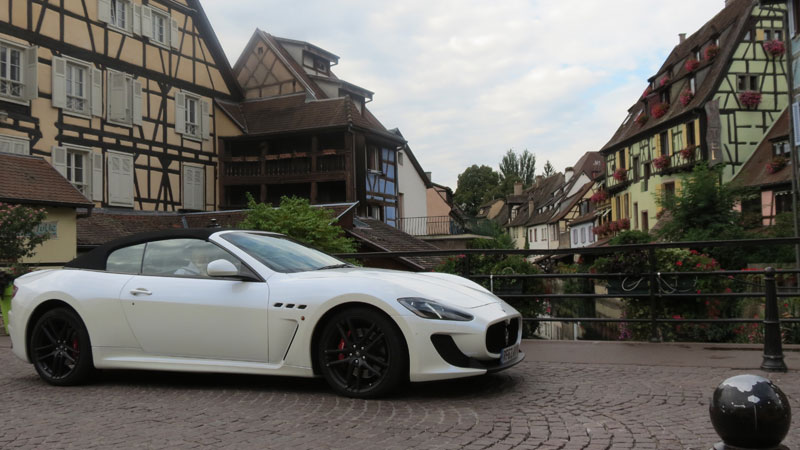 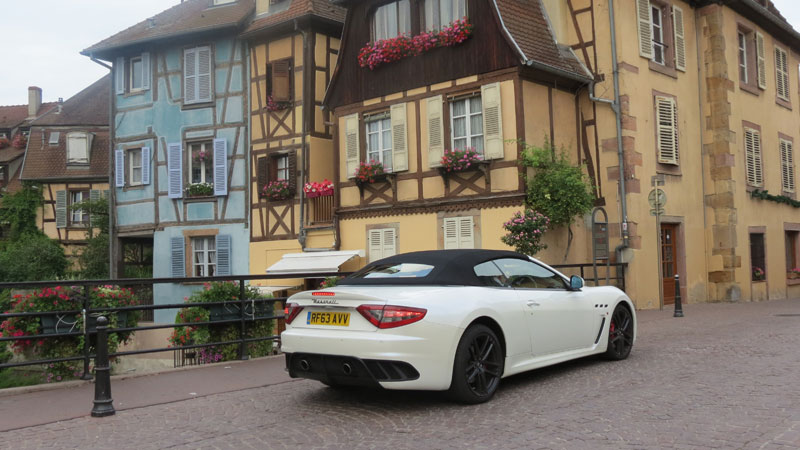 We now had only 200 miles until we arrived at our final destination in St. Moritz.  Unfortunately the weather was awful with heavy rainfall so we could not enjoy the delights of the MC with its roof down but it did test the road holding of the car in torrential downpours.  This it passed with flying colours but more was to come when we reached Switzerland and started the climb up to St. Moritz.

The Maserati MC negotiated the St. Julier Pass with great aplomb and élan, positively revelling in the endless, demanding hairpin bends and all this in low cloud cover.  We emerged into St.Moritz which even on an overcast day was breathtakingly beautiful and made our way to the iconic Badrutt’s Palace Hotel.  Now this is an hotel that has been the epicentre of style and elegance throughout its 150 year existence so on our arrival we were surprised to be greeted with such enthusiasm by the staff as we imagined that there was nothing that they had not seen before and would not be impressed by yet another sports car. 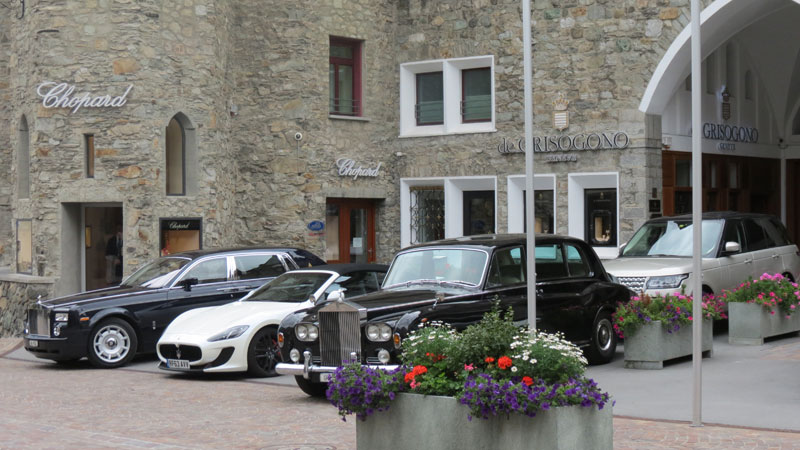 Considering the quality of cars that the Palace is used to we were amused to see that the Maserati generated such excitement and looked very comfortable sandwiched between their two Rolls-Royces!

Fortunately the day after our arrival the sun shone through and St.Moritz and its stunning setting could be admired in all its glory. Moreover we could drive the car with its hood down and whenever we drove the car around St. Moritz it never failed to turn heads such is the special appeal of the Maserati brand. 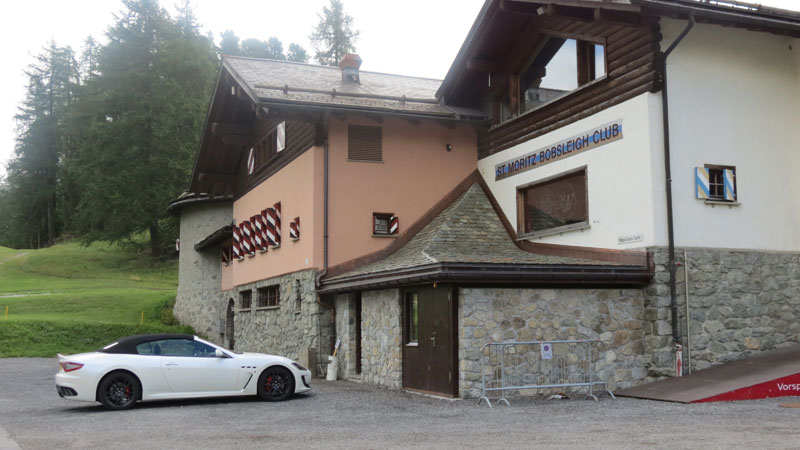 Our stay was over all too soon and we headed back over the route which we had covered only two days before but this time in glorious sunshine and we could enjoy the Maserati GranCabrio MC in all its glory. 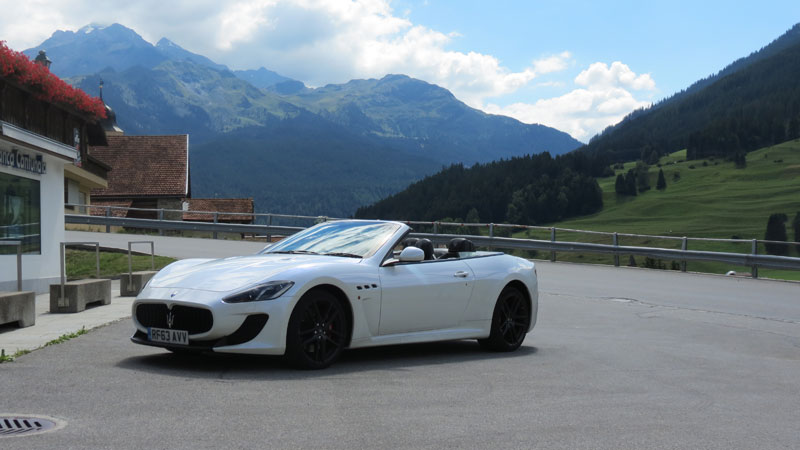 This might be appropriate moment to mention its engine capability;  The new 4.7 litre V8 engine delivers 460 hp and can propel the car from 0-62 mph in 4.9 seconds and has a top speed of 179 mph.  We certainly put the car through its paces and had great pleasure accellerating through the endless mountain tunnels which with the roof down echoed with the roar of the engine but we refrained from confirming the top speed of 179mph!

However the MC ate up the miles with ease and with one overnight stop again at Colmar we arrived home.  We had completed a 1600 mile journey and at no time did we experience driving fatigue or any discomfort which is a testament to the seat design.

The Maserati GranCabrio MC is an absolute delight and pleasure to drive and after six days, we found it a great wrench to have to hand this car back to Maserati!

Robert Jarman, The Editor and Founder of The Vintage Magazine 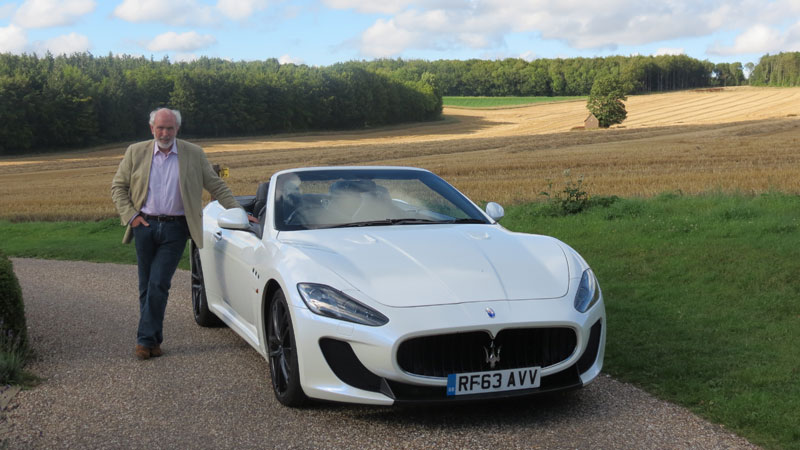