Lainston House is one of a small group of ‘Exclusive Hotels’, owned by the Pecorelli family.

Exclusive Hotels is one of the most respected family-owned hotel groups in the UK, and they celebrated their 30th Anniversary in 2011, during which time it has transformed the image of the country house hotel and set standards for others to follow.

The Pecorelli dynasty began in 1981 when founder Giuseppe, a former Director of the Trusthouse Forte Group, purchased the Pennyhill Park Hotel at Bagshot in Surrey.

Over the next ten years, the family added three more impressive hotels and two golf clubs to their portfolio and such has been the high quality of their efforts that all four hotels are ranked among the AA’s Top 200 and hold four or five star ratings.

Danny Pecorelli, who trained at the Savoy Hotel in London and worked in prestige hotels in the United States, had carried on the traditionally high standards set by his father who is now Chairman of the group which has a £40million annual turnover.

He has laid great emphasis on his hotel restaurants having what he calls a “stand alone” reputation with the ability to attract clientele in their own right and not just as obligatory hotel facilities.  As a result, both Pennyhill Park and the Manor House have earned Michelin stars for their cuisine.

He says: “A core strategy for us is operational excellence.  If the product is good, people still have money and they will still spend that money but your product, your service offering, your food offering, the whole package must be spot on.’ 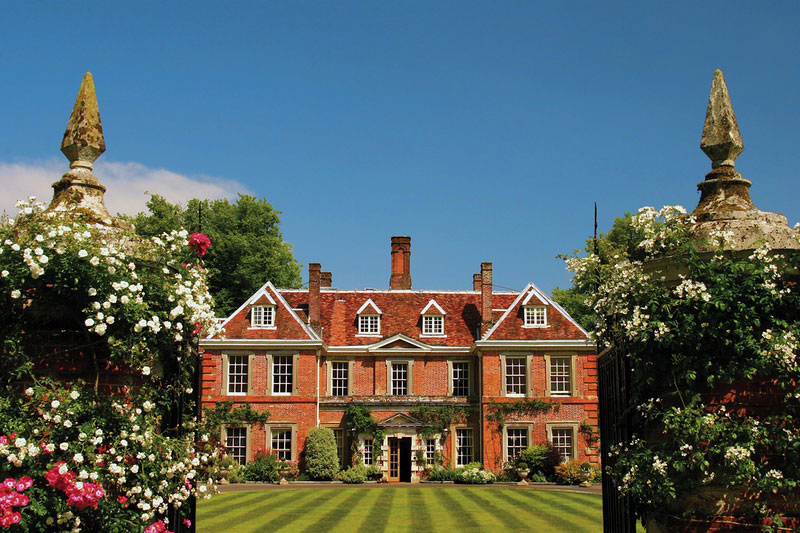 One of the jewels in their collection is Lainston House, an elegant 17th century, ‘William & Mary’ house just two miles east of Winchester, set in 63 acres of Hampshire parkland, and including an impressive avenue of beech trees, stretching out to the east of the property, and a walled garden within a walled garden, the outer area of which is the main car park.

From the moment that you sweep through the huge, but delicate wrought iron gates, into the inner courtyard, you are struck by the beautifully proportioned house, framed by delicate loggias and archways, supporting a host of fragrant roses and honeysuckle, jasmine and clematis, all of which looks superb in the early summer.

So we decided to make this the destination for our Sunday peregrinations in the Aston Martin ‘Vanquish’, and it would be hard to think of a better setting  in which to park our supreme example of automotive sculpture than right in front of this superb example of architectural harmony.

It is easy to visualise what a wonderful private house Lainston must have been 100 years ago, and what a perfect venue for weekend house parties, and it was no doubt the setting for many shooting parties, hunt meets, and fishing parties returning from their labours on the nearby river Test.

The house retains its charms, and all the more recent ‘new build’ has been cleverly and sensitively designed to blend in with the existing house, so that it makes the perfect venue for Weddings, especially with the ruins of an old chapel in the grounds.

This is also the perfect venue for a decadent Sunday lunch, which in the winter means guests are greeted by a blazing log fire in the main hall, and in the summer with lunch’ al fresco’ on the terrace overlooking the famous avenue.

Whichever the setting, the attentive staff have developed the art of creating an ambiance which enhances the whole experience, and makes this an award-winning restaurant.

The Chef, Phil Yeomans, and his talented team, have been awarded a stunning three rosettes for their creative, thoughtful and tasty dining featuring locally sourced produce with a traceable provenance. 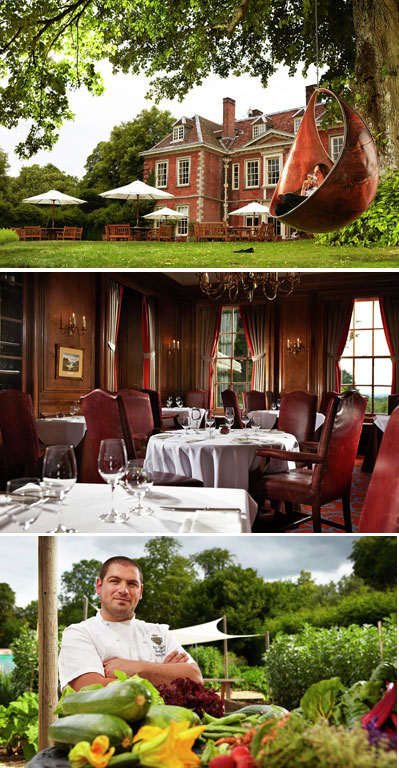 Lainston House actively supports Food Heroes, an Exclusive Hotels initiative to promote and work with local suppliers, so that they can source the very best seasonal produce and develop excitingly varied menus for eating out in Hampshire which includes all the wonderful things available locally, including trout from the River Test, and game such as pheasant, partridge, duck and venison.

The quality of the cuisine is extremely high, and the food is accompanied by an extremely comprehensive wine list, which is full of wonderful wines sadly which I cannot afford, but which would delight a wine connoisseur with deep pockets.

As usual we were greeted warmly on arrival, and were soon agonising over the Sunday lunch menu, including all the usual favourites, which we washed down with a very good Sicilian Shiraz, but alas, we had to restrict our drinking because we had to accomplish the safe return for our ‘charge’,  after a memorable weekend.

I can thoroughly recommend Lainston House as a perfect setting for a long Sunday lunch, either in the deep midwinter, or in the height of the summer, and they arrange lots of special events throughout the year, so do look at their website: www.exclusivehotels.co.uk

P.S. We are planning to feature the other hotels in this group throughout this year, so be sure to keep reading The Vintage Magazine!