This article has been written with Parents and Grandparents in mind.  If a young member of your family is seeking inspiration or direction as what to do in a gap year or maybe they are not inclined to go to university then a career in the super yacht industry could be the answer.

The financial crisis of the past few years has exposed the widening gap between the richest and the poorest in a way that has not been shown in the past .

What distinguishes the current recession is that the market of the very best luxury goods and the playthings of the rich has never been stronger.

Last year (2011) Rolls Royce enjoyed its best year ever, with sales to China exceeding those to the USA for the first time ever, but nowhere has this dichotomy been more noticeable that the rarefied world of luxury yachts which seems to be immune from the financial crisis gripping the world.

What has also changed is not just the increasing number of super yachts being built, but their size.  Super yachts have been superseded by mega yachts, and mega yachts by the new generation of giga yachts.

Here are some interesting statistics.  In 2009, one hundred and ninety four super-yachts were built; In 2010, two hundred and sixty two; and in 2012, one hundred and fifty one so far, but already this year by sales value, they have exceeded Euros 1.432 billion, which means slightly fewer but much larger yachts are being built.

Firstly, let us try and define a super, mega or giga yacht.  My interpretation would be that a super yacht is any vessel more than 100 ft long, and a mega yacht is any vessel over 300 ft long, but it is now quite common amongst the super rich to have yachts of over 400 ft (122 metres!), which are now being referred to as giga yachts.  This begs the question as to what comprises super-rich and mega rich, and I would define the former as having more than one billion, and less than £5 billion, and the latter as having more than £5 billion.

It might surprise you to know that there are over 1000 billionaires in the world today!

One of them is Alisher Usmanov, now possibly Britain’s richest man who took delivery of his yacht ‘Dilbar’ a few years ago, which at 110 metres is reputed to have cost him £110 million, which equates to luxury yachts costing about £1 million a metre.

The inexorable increase in the number of people who can afford these yachts has resulted in a serious shortage of crew for super yachts, so much so, that at the recent Monaco Boat Show, Burgess Yachts announced their sponsorship of a new Academy for training the necessary numbers of staff to service the super yachts which they manage.

The Maritime Industry has been warning of an acute shortage of professional staff needed to keep the ever-growing fleet of super yachts afloat.  In fact, things are getting so bad that Ivana Trump is forced to have only one manicurist on board!

To redress the balance, these mega-rich owners are poaching able seamen from the Royal Navy!   Furthermore, Plymouth University have launched a new Degree course in ‘Super Yacht Studies’ to satisfy the demand.

The number of luxury yachts being purchased has increased dramatically in recent years, and there are now more than 5000 such vessels, and the ‘Fleet’ is growing at about 10% per annum, with a corresponding rise in the number of jobs available.  The fact that the size of the vessels is growing, also adds to the crew shortage.

Some billionaires live for up to nine months a year on their yachts, such as the British-born Joe Lewis on AVIVA and Roman Abramovich’s new boat, ‘Eclipse’ will be 550 ft, has every single amenity you can think of, and will require a 80-strong crew!

The irony about this development, is that these, so-called giga-yachts, and indeed most of the mega-yachts, are too big to get into most of the nicest ports like St Tropez, and are forced to anchor offshore, and ferry all their owners, guests and crew to and from the Mother Ship, in a variety of ‘tenders’, some of which would make very nice boats in their own right!

When ‘Eclipse’ is launched she will be the world’s largest privately owned vessel, and will require a crew of a captain, first mate, second  mate, an engineer, assistant engineers, purser, experienced sailors, security staff, Helicopter Pilot, etc, and domestic staff such as cooks, stewards, stewardesses, personal assistants, and maids, as well as physiotherapists,  beauty therapists, maids, cleaners, etc.

The industry estimates it needs an extra three thousand crew this year and well over four thousand next year.   Junior crew members can earn about £16,000 year, tax free, with bed and board included!   An experienced skipper more than £250,000 a year, so this is not just a bit of fun to be had in a gap year, but a career choice with very bright prospects.

In addition, in the case of Charter Yachts, there are tips from the charterers.  These are often 15% of the Charter Fee which might be as much as US$500,000 per week, so 15% would be US$75,000 to be divided up amongst the staff according to an established hierarchy, but even lowly deckhands can make $500 a week in tips.

Where else can you get a job working in such luxurious surroundings, in the most beautiful parts of the world, with a group of like-minded people, and earn so much money?

Furthermore, it is almost impossible to spend any of your wages as all your needs are catered for as part of the job, including accommodation, uniform, food and drink, laundry and transport to and from the boat.

A word of warning though; if your children are still going through their ‘Ethnic’ phase, i.e. with piercings, tattoos, scruffy hair, and wearing their trousers half way down their bottom, they need not apply, because the owners want to look at beautiful people, including their own staff.  Call this discriminatory if you like, but I regard it as perfectly normal; nobody wants a scruffy, badly-dressed boy, or girl on their beautiful yacht which has just cost them £100 million.

For anyone interested in working on Luxury Yachts, there is an excellent guide, Working on Yachts and Super yachts, published by Quiller Press, it’s a book written by Jennifer Errico who has been involved in the super yacht industry for over 15 years working as a deckhand, stewardess and chef.   We think the book is an excellent and comprehensive guide and will give you essential information and advice on getting a job.

So, if commuting to London at 6.30am on a grey, cold, winter’s morning does not appeal to you, and you want a good alternative, then find out more about what is required to work in a wonderful place with beautiful people, have no overheads or rent or mortgage, and get paid well, tax-free, and live on your ‘tips’ so you can save all you earn.

One of the best training establishments for all aspects of jobs on luxury yachts, is UKSA at Cowes on the Isle of Wight.   UKSA is a registered charity that is committed to changing the lives of everyone it works with through its maritime training and experiences.  The charity has enhanced the lives of many young people and undertakes extensive fundraising activities to provide personal development opportunities to all.  UKSA is a globally recognised professional training establishment, training in watersports and yachting to the highest level.

Contact UKSA at the address below, and say The Vintage Magazine sent you

Below is an example of a Super Yacht.  Baton Rouge is a mere 62.5 metres but luxurious nonetheless!  Its exterior is by Tim Heywood and interior by Redman Whitelely Dixon 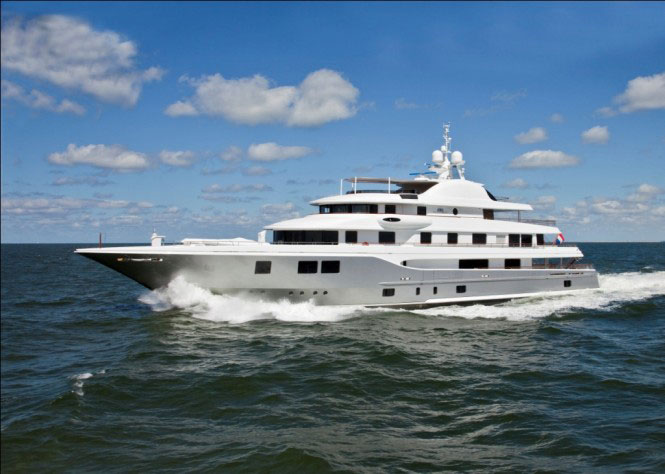 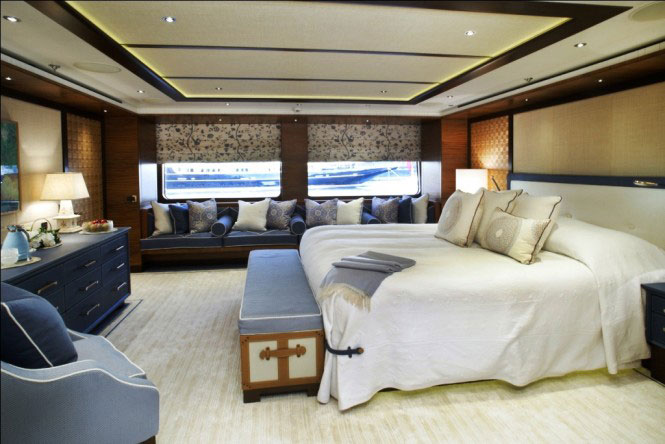 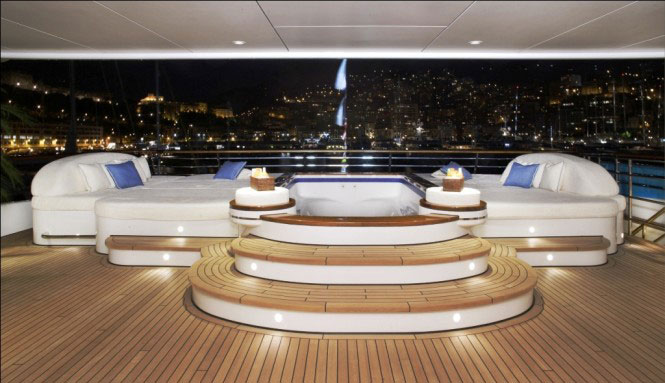 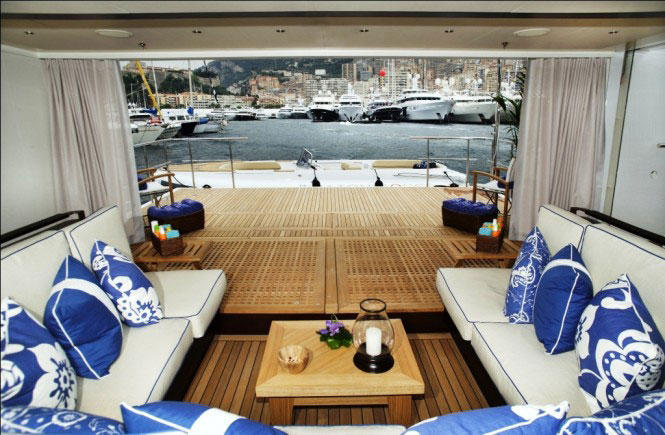 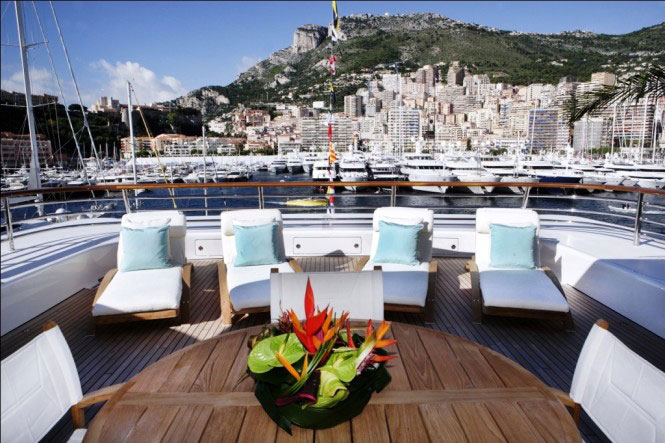 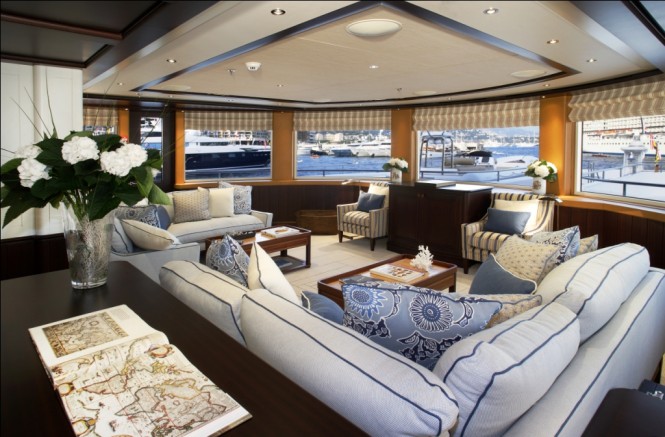