This is the first in a series of anecdotes and other stories from the career of one of Britain’s best loved explorers.

AUDIENCES  WITH  THE  EMPEROR

Thanks to my Godfather, who had entertained His Imperial Majesty Haile Selassie during his exile in Britain following the Italian invasion of Ethiopia, I was privileged to meet the Emperor on a number of occasions.

As Adventure training officer at Sandhurst, my job was to despatch officer cadets around the globe during the long summer vacation on worthwhile projects for the benefit of their characters and the least possible detriment to the Empire, as the Commandant put it.

Scanning the world map in my office (labelled Training Area), Ethiopia seemed a suitably wild land to take a party of cadets on a zoological quest.  A letter from my Godfather resulted in an invitation from the King of Kings, Elect of God and Conquering Lion of the Tribe of Judah, who by good fortune was also an honorary Field Marshal in the British Army.  Thus in 1965 sixty well armed, budding zoologists set out to enhance the natural history collections of the British Museum.

To keep them gainfully occupied, I handed out two large plastic tubs and indicated a nearby mosquito-ridden swamp.  ‘The British Museum is in urgent need of small green frogs.  By the time I return I expect these to be full,’ I said.  ‘Sir’ they replied in a tone verging on dumb insolence.  Three days later, having collected the mongoose, we marched into camp and, as expected, the soldiers were dozing in the shade.  ‘Frogs’ I bellowed.  ‘In tub,’ said one.  To my astonishment both containers were crammed with writhing green reptiles.  ‘How on earth did you do it?’  ‘Oh, was nuffin really, just a bit of hard work,’ they replied with assumed modesty.

My opinion of these two rogues mellowed and I recommended them for promotion!  It was long after the expedition that I discovered their method.  They would go to a native village with a copy of Playboy.  As soon as the local men had gathered round, they would open the centre pages and permit a quick peep, and then say ‘Three frogs, one look’.  Thus encouraged, the natives would rush off to collect as many frogs as they could to earn another look.

The expedition over, we had to get all our zoological specimens back to England.  Although we had done our best to preserve them, the presence of some large, slightly putrefying reptiles in a hot, stuffy aeroplane en route from Aden to UK did not endear us to the RAF, and one of the planes had to make an unscheduled landing at Malta when the stench became overpowering.  There can’t be many pilots who can claim to have been forced down by a crocodile!

However on our return to Addis Ababa, where we were greatly honoured to receive an invitation to meet His Imperial Majesty and report on our quest.  The invitation was extended to everybody, and I wondered whether the court realized just how many of us there were.  Protocol demanded one bowed to the Emperor three times.  Once on entry, again halfway up the red carpet and finally when right before him.

On leaving his presence one had to repeat the process in reverse.  No problem, you may think, for well-drilled officer cadets, but Haile Selassie had a population of lions roaming the throne room and I could imagine a terrible incident that might result if a cadet, walking backwards, should fall over one of the royal beasts.

I consulted Tommy, an Ethiopian working at the British Embassy, who gave me the solution.  ‘You will notice,’ he said, ‘that we cast ourselves down very low when bowing to the Emperor, pressing our foreheads upon the carpet.’  ‘Steady on,’ I said, ‘we’re British you know – a stiff little bow is all that is usually required.’  ‘I’m not suggesting you be obsequious,’ replied Tommy, ‘but if you cast yourself down low you can look between your legs and see the lions lurking behind you.’  By this means sixty officer cadets and two ladies in skirts successfully entered and left the presence of His Imperial Majesty.

The next meeting with the Emperor came in 1968 following an even more epic expedition, when at his royal request, a team of servicemen and scientists, pioneered the use of inflatable boats to make the first descent of the uncharted Blue Nile; then thought to be the last unexplored region in Africa.

As the Emperor was our patron, we felt we should take him a gift.  Consulting the Minister at Court, I learned His Imperial Majesty’s favourite pet was a male Chihuahua named Lulu.  Apparently his driver had the same name which could cause confusion at feeding times. However it was suggested we present the Emperor with a mate for his pet.  Thus I phoned Judith, my wife enjoying peace and quiet at home, and requested she find an attractive Chihuahua bitch and despatch it forthwith to Addis Ababa.  For the princely sum of fifty pounds, a fortune in those day, she acquired Lulette.  Later, to cause more confusion in the Royal Palace.

At the start of the expedition, Colonel Philip Shepherd, our liaison officer in the capital, had suffered at the hands of an over officious customs chief who refused to release our Army composite rations, without which we should starve.  It was only after a considerable amount of hassle and finally the intervention of the Emperor himself, that the food was freed from the bonded warehouse.

Now whilst we battled through the rapids of the great river, Philip was landed with the task of arranging the passage of a Chihuahua through the customs.   Unperturbed he saw this as an opportunity to get his own back on the intransigent Customs Authorities.  ‘Are there any difficulties in importing a live animal, i.e. one dog, into Ethiopia, and how long will it take? he asked an official.  ‘Yes, there are several formalities to comply with, and these usually take from five to seven days.  ’Good God!’ said Philip, ‘As much as that?  Can’t I get it through in one day?’  The Audience, at which the gift was to be made, was imminent.  ‘No, Sir.  One day, that’s completely out of the question.

Anyway, why do you want to know this?’ asked the official.  ‘It isn’t I, in fact, who wishes to know; it’s the Emperor really, because he’s having a dog sent out from England, and he just wondered how long it would take.  And now I can tell him that it may take up to seven days.   Thank you so much for your help,’ said Philip, putting the receiver down.

He walked into the adjoining office at the Embassy and said to the Warrant Officer, ‘If the telephone goes in the next two or three minutes and it happens to be the Customs, tell them I am not in’.  He had barely finished explaining why when the telephone rang.  ‘British Embassy,’ said the Warrant Officer.  ‘No, I’m very sorry, Colonel Shepherd has just left.’

For twenty-four hours the custom’s officer combed Addis Ababa for Philip, and eventually a nervous and perspiring high official caught up with him.  ‘About that dog,’ he said, ‘there’ll be no delay at all; it’ll be quite all right to bring it in straight away.’

So it was a red carpet rolled out as the schedule Ethiopian Airlines plane halted at the terminal and a sergeant of the Imperial Bodyguard, his pith helmet bedecked with a lions mane, carried a rather tired little dog into Ethiopia.    We just had time to give her a shampoo before being driven to the Palace.  Now came the march into the throne room. Although I had practised bowing low, it was quite a challenge to do so whilst balancing a Chihuahua on a silk cushion.  The King of King’s eyes lit up as he reached forward to accept our gift.  ‘You could not have brought me anything nicer’ he said in perfect English and having lovingly hugged the little lady, he put her down on the polished floor. 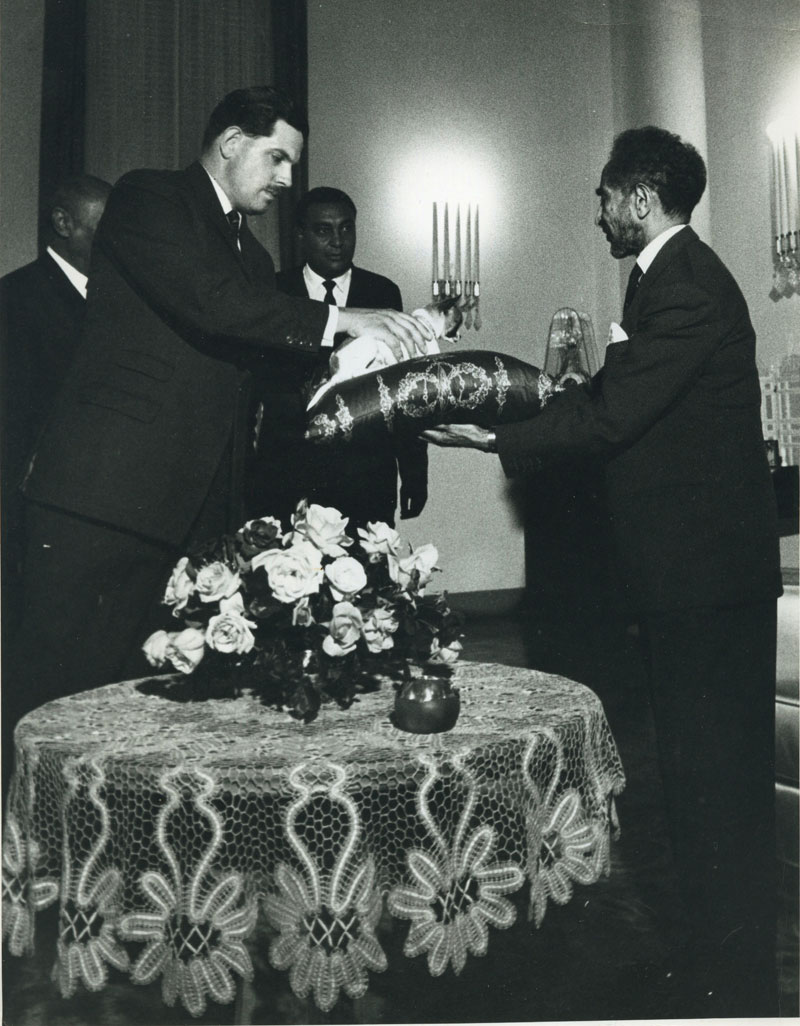 Immediately an excited Lulu appeared, rushing over, as dogs do, to inspect the new arrival and as a result Lulette who could no longer restrain herself, delivered an enormous puddle.  ‘Never mind’ smiled the Emperor, ‘it shows she is at home in my Empire’.  Whereupon Lulette went behind the throne and dropped a rather large mess!  ‘Now you must see my other pets’ said His Imperial Majesty, leading us into his garden.  It was unfortunate that our lady manager was wearing a leopard skin patterned dress when she met the Emperor’s prize Cheetah! 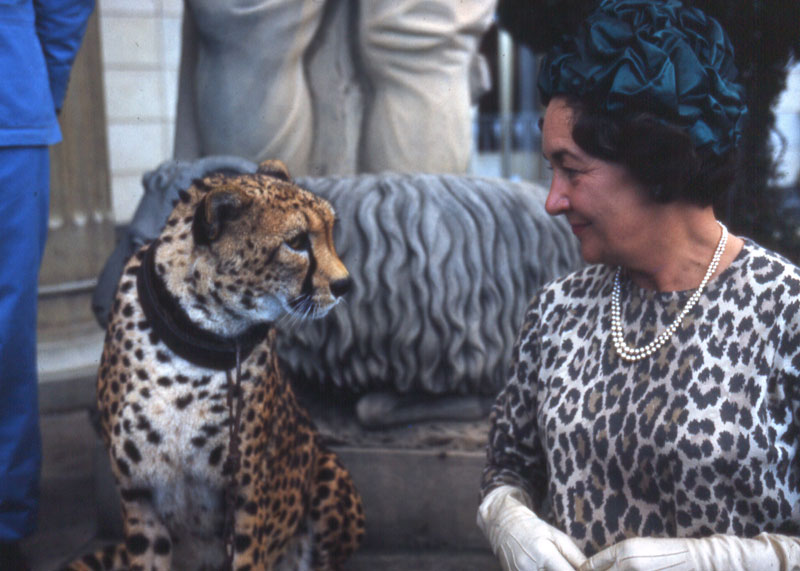 The Emperor’s Cheetah meets its match!

Photograph Credit:  The photograph of His Imperial Majesty, Haile Selasse being presented with Lulette by John Bashford-Snell was taken by Chris Bonington in 1968 for the Daily Telegraph Magazine.