Sardinian cuisine for international customers in one of the most expensive residential areas on the planet; that is the recipe for success enjoyed by the owners of OLIVO.

However, before I embark on this restaurant review, let me share with you some history about the area in which this group of restaurants is situated, namely Belgravia.

The area takes its name from one of the Duke of Westminster’s subsidiary titles, Viscount Belgrave.  The village of Belgrave, Cheshire is two miles (3 km) from the Grosvenor family’s main country seat of Eaton Hall.  Most of the area was originally owned by Richard Grosvenor, 2nd Marquess of Westminster, who had it developed from the 1820s.

Thomas Cubitt was the main contractor, and Belgravia is characterised by grand terraces of white stucco houses.  It is focused on Belgrave Square and Eaton Square and remains London’s most fashionable residential district as indeed it has always been since its creation.

The average house price in Belgravia, as of March 2010, was £6.6 million, although many houses in Belgravia are among the most expensive anywhere in the world, costing up to £100 million, a mere £4,671 per square foot.

As of 2013 many residential properties in Belgravia are owned by wealthy foreigners who have other luxury residences worldwide in exclusive locations or in their countries of origin, thus many Belgravia properties are unoccupied for long periods.

Whilst this phenomenon has diminished social relations in the neighbourhood, there is, nevertheless a strong feeling of community amongst the permanent residents who inhabit possibly the most affluent ‘village’ in the world, and it is also home to a plethora of some of the best restaurants in London  Amongst them is the hugely successful OLIVO group.

The Interior of Olivocarne designed by Pierluigi Pui who has been the architect responsible for all of the restaurants in the Olivo Group.

The first Olivo restaurant opened in November 1990 specialising in Sardinian cuisine serving the local Belgravia area.  As a result of its popularity, in November 1995 owner Mauro Sanna opened a second restaurant, Oliveto, still featuring authentic Sardinian fare but with a slightly more informal slant including pizzas which are reputed to be some of the best in London.

In May 2007, Olivomare, a third restaurant was opened, with the addition of an adjoining shop.  With its award winning interior designed by Sardinian architect Pierluigi Piu, designer of all of the restaurants, Olivomare opened a new chapter in the Olivo story by serving only seafood, again with a Sardinian influence.

Olivino, the adjoining shop, offers much of the specially imported Sardinian produce used in many of the dishes served in all four restaurants as well as some of the finest Italian and Sardinian wines available in London.

In the wake of the success of Olivomare comes Olivocarne, which opened in August 2012. 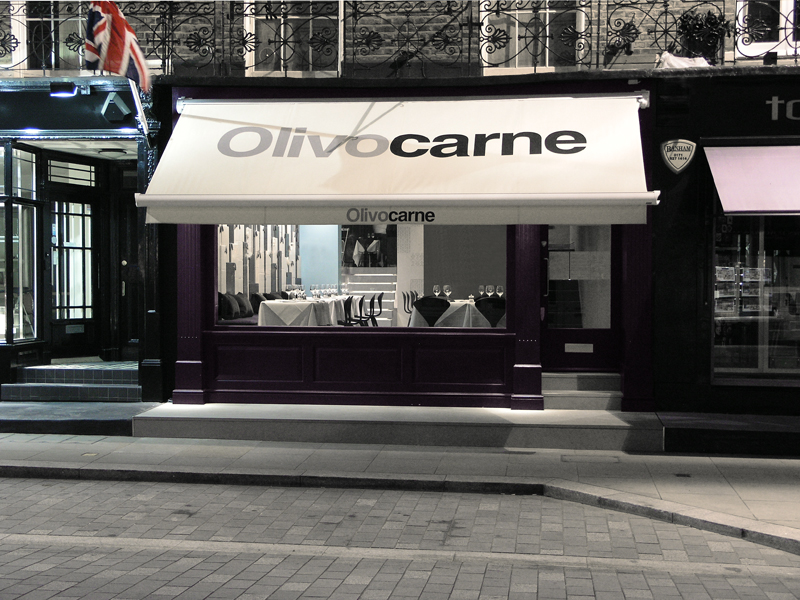 Olivocarne, where we dined, is a restaurant devoted to all things meat with a menu dedicated to char-grills, pastas, game, offal and more besides, so it proved extremely popular with my son, William, who joined me at Olivocarne.

Knowing I was going to be late, I had telephoned and told him to order a bottle of the house wine (red) to help keep him going until I arrived, and when I tasted it I thought he had plumped for something much more exotic, but it was the Olivo – Monica (2010), which along with the Olivo – Reserve (2008) are made especially for the restaurant in Sardinia.

They are simply stupendous ‘House Wines’, full bodied, but well-balanced, and perfect for the ‘meatfest’ which was about to begin.

I started with Zucchini E Ricotta Sarda – Char grilled courgettes, salted ricotta, and rocket & truffle oil, whilst Will had the Vitello Tonnato – poached veal fillet with caper and & tuna mayonnaise, a Sardinian triumph.

I then had the Sottopancia di Manzo – char grilled sliced beef skirt with rocket and marinated tomatoes, which was succulent and delicious, whilst Will went for the Battuta D’Angello – char grilled marinated leg of lamb with rosemary and green salad, which he thought was wonderful, and demolished pretty quickly.

Everything was cooked to perfection, and served quickly and efficiently, with the minimum of fuss, which is one of the signs of a good restaurant.

Eating at Olivocarne made me realise what a rich culinary history Sardinia has, and what fantastic wines.  How refreshing it is to eat Mediterranean food on a chilly autumn evening in London.

Looking at their web site, I was pleased to see that no lesser a critic than A.A.Gill had said of the Olivo Group in the Sunday Times STYLE Magazine:- “This is an exemplary way to grow local restaurants, a small chain that serves a local community without ever losing quality or consistency or it’s sense of place,either where it comes from or where it is”.

I couldn’t have put it better myself!