Picture this in your mind: 33,333 vines per hectare planted in a 15 metre diameter circular vineyard with ungrafted Petit Verdot…on the right bank of Bordeaux. I know what you are thinking. “Hang on a second, this is not Chile, we are talking about a region that was badly destroyed by the nasty louse called Phylloxera in the 19th century, the producer must be mad!” 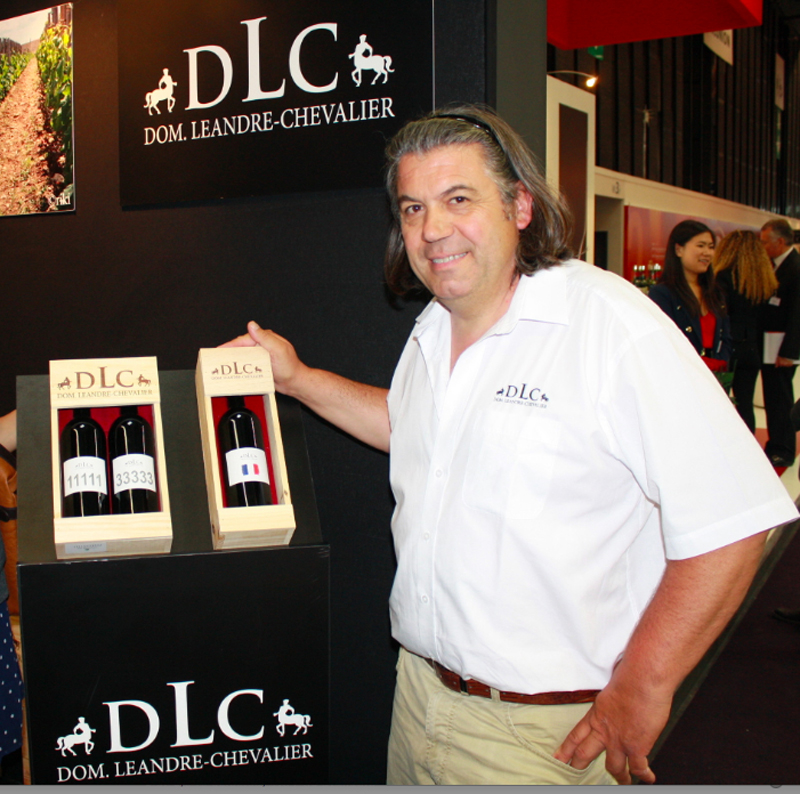 Well, as you might have guessed, Dominique Léandre-Chevalier from Domaine DLC is not your usual wine grower.  He is hard to define. He plants vines organically, using only organic products such as pine oil to treat his vines, but he is not bothered about getting it certified; he applies a few biodynamic concepts, but he is not a biodynamic producer either. He uses horses and machines to work his land, embracing both traditional and modern methods. He has a lot of ideas about vine growing and wine making but he doesn’t like to be bound by rules, regulations and bureaucracy.  Looking after the vines is a bit like his passion for gardening and he likes to have as much freedom as possible.  He wants to be unique, and he is indeed one of a kind.

I met Dominique Léandre-Chevalier in the recent annual London RAW fair, a wine fair dedicated to natural wine lovers.  He doesn’t speak any English, so I was able to practice my rather rusty French, with some help from his lovely German colleague Ulrike Neumann.  I only had very little time left that day, so I went straight in, tasting two of his signature wines with eye-catching labels: big numbers of 11111 on one, and 33333 on the other.

Ulrike explained to me the whole concept behind the two wines: these are two 100% Merlot and the meaning of those numbers is planting density.  In other words, one is made from Merlot planted at 11,111 vines per hectare while the other is 33,333, which is three times more than the usual planting density in Bordeaux.  Dominique then took two glasses asking me to compare them side-by-side: they are made in identical ways; the only difference is the planting density.  And, oh là là, how they are different!

The ‘11111’ Merlot is full of lively wild dark berries, juicy but intense. But the ‘33333’ is showing abundant fruit concentration. After tasting, I looked at Dominique rather surprised and he said, “oui oui, très different!’ (Yes, yes, very different!)

A while ago at Vinexpo in Bordeaux, I had the opportunity to taste through his wines and to get to know the philosophy behind.

Dominique’s family estate dates back to 1895 with the vineyard holding of 12 hectares in Anglade, Blaye (though he prefers to say it is on the right bank of Bordeaux opposite Pauillac, which is just across the river).  When Dominique was young, he wasn’t really interested in being a winemaker or grower.  But eventually, he got more involved in the family business.  In 1985, the second year Dominique worked alongside his father in the estate, tragedy struck.  His father died in an accident in the winery.  As a result, Dominique took over the family estate from then on.  Currently he is working on around 3 hectares of land; the rest is kept within other family members.

Dominique produces a good range of wine, 14 of them in total at present. Four of which are AC Blaye Côtes de Bordeaux, a blend of Merlot, Cabernet Sauvignon and some with Petit Verdot.  But to fully appreciate his “quirkiness“, you will have to try his Vin de France, the most humble appellation (table wine level) in the French AC system.  Only within this category, he is allowed to apply his creativity in full swing and in the mean time enjoys more freedom, which is nonexistent in other AC categories.

All his wines are not capitalized (adding sugar); with minimum or no intervention during wine making process and are all with very low level of total sulphites as he believes this is the only way that the real terroir can be expressed when wines are speaking for themselves.  Amongst all, the two most unique wines have to be his 100% Petit Verdot.  In Bordeaux, the role of Petit Verdot is more likely to be the “seasoning” in the blend; a small percentage will do the trick.  It is a difficult grape variety to grow, very late ripening, making it rather unpopular amongst growers. But Dominique not only produces two wines using 100% Petit Verdot, but on one of which, he even uses ungrafted Petit Verdot vines from the vineyards belonging to his sister in Île de Patiras; a little island in the Gironde Estuary, between Pauillac and Blaye.  Those pre-phylloxera vines were planted in 2000 in a circular vineyard, using the ancient planting technique called Provinage. 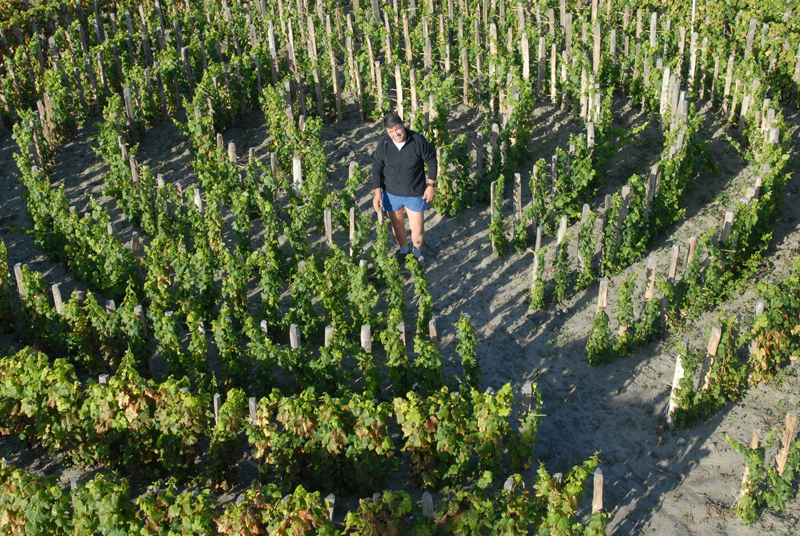 Provinage used to be typical for France before Phylloxera.  In DLC, those Petit Verdot vines are planted with an extremely high density of 33,333 vines per hectare on sandy soil (phylloxera dislikes sand).  Each grapevine shoot is bent and placed in a 50 cm deep hole dug next to the root and then covered with soil.  The buried part is then able to grow more roots.  The shoot comes out 30 cm further along, and is fixed to a stake.  This is a method that ensures the vine benefits from the large root system in order to extract as many nutrients from the soil as possible.  To guarantee the concentration of the fruit, each vine will produce only one to two bunches of grapes each year.

After years of much hard work, Dominique has recently launched the first vintage from his circular vineyard, 2009 Tricolore with 100% ungrafted, pre-phylloxera Petit Verdot.  Only 144 bottles are made available, which, of course, come with a staggering price tag (€ 3,240 per bottle)!

Asking Dominique what if the phylloxera epidemic strikes again?  “The plan is to build a stone wall around the vineyard and flood it if it happens. Phylloxera hates water, ” he says.

Some other wines that I tasted:

The name of the wine means “little sisters”. This wine is actually dedicated to his two elder sisters.  Very floral, violet, dark berries with fine tannin and good structure. (€22)

Jewel is the name of the wine. Black berries, plums, violets, very pronounced and concentrated. (€30)

This is a non-vintage wine and some grapes came from the circular pre-phylloxera Petit Verdot vineyard. Super intense and concentrated; lots of dark fruits and with the wild spices typical of Petit Verdot. (€40)

Originally from Taiwan, Leona moved to the UK in 2005.  She started her career as a PR professional, helping brands (spirits, travel, food etc) to create stories that would interest journalists. She also worked for Sopexa Taiwan as Project Manager, managing wine projects and media relations; it was then she started to be fascinated by the world of French wine and eager to explore every single detail about wine making and vine growing.

Leona began her wine writing and translating career when she moved to the UK, firstly with Decanter Magazine (Chinese Edition in Taiwan) and is currently UK & Europe Correspondent for the most influential wine and spirits magazine, Wine & Spirits Digest, in Taiwan. She has travelled extensively to vineyards in Europe and you will almost always find her at major International Wine Exhibitions “grilling” producers.