Because of the nature of The Vintage Magazine, we tend to review restaurants in the West End of London, and in Mayfair, St.James’s, Belgravia, Chelsea & Kensington, but we seldom venture south of the River, so it was with some trepidation that I was tempted down, south of the river, to Roast, which is an extraordinary restaurant located in an architectural gem called the Floral Hall, which is built on the site of the old flower market of Borough Market. 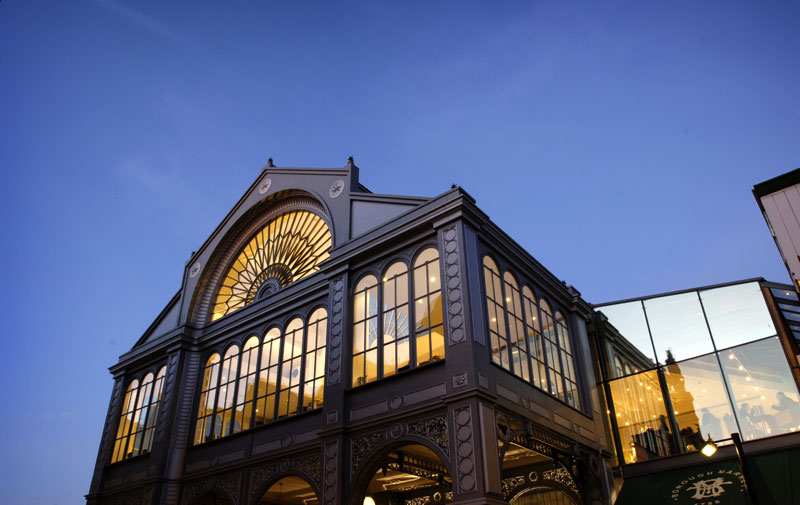 In 2004, what is now the south portico of the restaurant was re-erected, having been dismantled in the 1990s from its previous location in Covent Garden, and there are certainly ‘echoes’ of Covent Garden, with the restaurant suspended above the bustling Borough Market, with its myriad of food stores, and other establishments all vying for business in this lively environment.

Before Roast opened in 2005 and brought the Floral Hall back to life, the building was only used for storage. Spotting its potential as a unique restaurant location, Iqbal Wahhab joined the bidding war and several months later, the Roast ‘dream’ was put into motion.

Roast Restaurant in London’s iconic Borough Market uses the finest seasonal ingredients to create classical British cooking that both supports and celebrates Britain’s farmers and producers, many of whom are stallholders in the market.

Roast is a restaurant for all occasions, popular for breakfast meetings, weekend family brunches, pre-dinner cocktails and exceptional lunches and dinners.

Its long-standing reputation for corporate entertaining and client events has now extended to weddings; the stunning location in the portico of Borough’s former flower market offers views of the bustling market below and the dome of St Paul’s Cathedral in the distance, making it a breathtaking setting for a memorable occasion.

Opened in 2005 by restaurateur Iqbal Wahhab, founder of the legendary Cinnamon Club and, now owner of Roast, has since won a legion of fans and a clutch of awards.  Iqbal Wahhab OBE FRSA  was born in Bangladesh and came to Britain at the age of eight months. He was educated in London and is a graduate of the London School of Economics.  After working as a journalist in the national press for three years, in 1991 he set up his own PR firm which specialised in food, drink and restaurants and then in 1994 he launched Tandoori Magazine.

He sold the magazine to launch the multi-award winning Cinnamon Club in 2001 – a restaurant and bar aimed to change the way we view Indian dining, which it has done, and in in 2003 he co-authored The Cinnamon Club Cookbook and in 2005 opened Roast.

A warm welcome and innovative selection of wines, beers, spirits and cocktails await you at The Bar at Roast. Situated atop London’s Borough Market, the bar is renowned for its rare and exclusive drinks list, it’s deliciously British bar food menu, its live music and its regular tasting events and classes.

Just two minutes from London Bridge station, The Bar at Roast is open all day and makes an ideal spot for all occasions including morning coffee, corporate entertaining, after work meet ups and pre and post dinner drinks. The bar is also available for exclusive and semi exclusive hire, and hosts many events and tastings throughout the year. 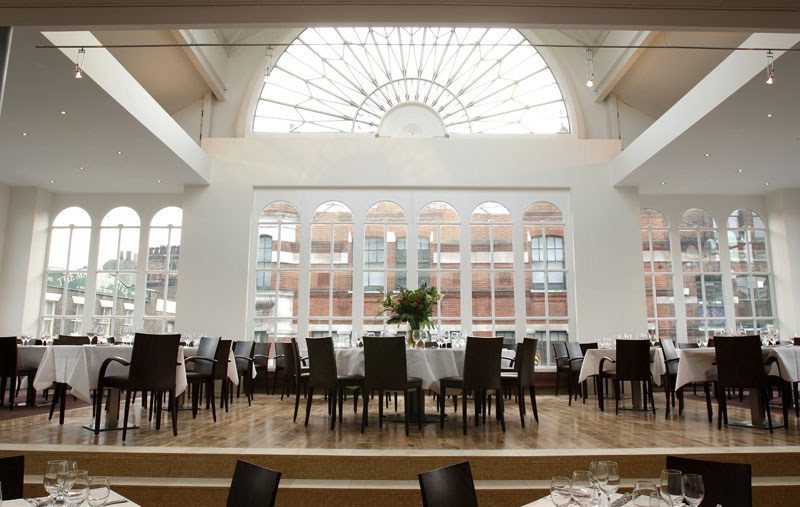 The day we had lunch there, the restaurant was buzzing, and there were the beginnings of the pre-Christmas ‘office party’ season, so lots of City businessmen and their professional advisers, lawyers, accountants etc, frequenting the place, but I was transfixed by the view from our table down onto the busy Borough Market, and the whole place was busy and vibrant.  This is not a restaurant where the customers whisper reverentially; it is full of laughter and animated conversation!

The food is sensational, in a pleasantly traditional way, and focuses on great British ingredients, reflecting the wonderful produce which we take for granted in this country, with organic ingredients from British farms , and wines from British  Vineyards, and it reminds you how superb  Great British food can be. 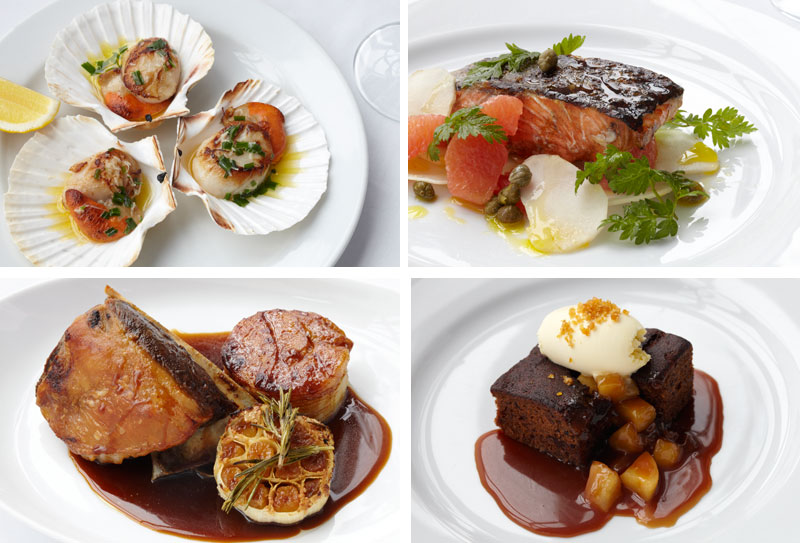 For our starters my guest had Gamekeepers Terrine, and I had Potted Salmon from Loch Duart, and he followed this with Slow Roasted Belly of Pork, with mashed potatoes and Bramley Apple sauce, and I had chargrilled Aubrey 28-day dry-aged Rib eye steak with chips and Béarnaise sauce, and we finished with Warm Tapioca Pudding with Yorkshire Rhubarb, and stem ginger compote, and the whole meal was beautifully cooked and served.  We chose an English wine to accompany our food, a Chapel Down Bacchus Reserve 2012, Tenterden, Kent, which was superb, but not cheap at £35 per bottle.

There is a very pleasant ambience, enhanced by the politeness and efficiency of the staff, who move purposefully around this huge conservatory of a restaurant, which, despite its size, retains a definite intimacy. 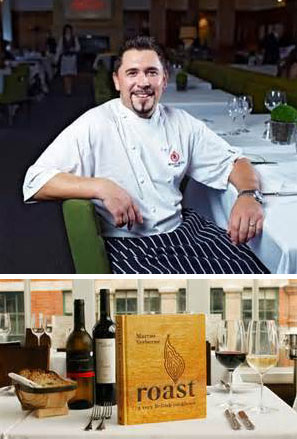 And now, there is  ROAST – A Very British Cookbook, so you can discover the secrets behind Roast’s most famous dishes in their first-ever cookbook!

You can learn more about Roast’s excellent suppliers and producers from around the UK and delight in essays on foraging and carving.

For the more difficult, unfamiliar preparations such as opening a live scallop or oyster, butchering a duck or rabbit, or for carving large joints, there are not only step-by-step photographic instructions, but also QR codes that bring the pages to life by linking to film clips of Marcus Verberne guiding you through each technique.

The Roast cookbook will be one you reach for often, whether it is to create a full dish or meal or even just for a quick tip. It also makes a brilliant gift for foodie friends, family and clients.

You can obtain a copy of this book from: