Russia’s most famous and successful restaurateur, Arkady Novikov heads an empire with more than 50 restaurants throughout Moscow.  He has put an individual stamp on each of his restaurants, enthused by different regions of cuisine.  The man with The Midas Touch, his organisation includes supermarkets, florists and a 15 acre farm, with some 7,000 people in his employ. 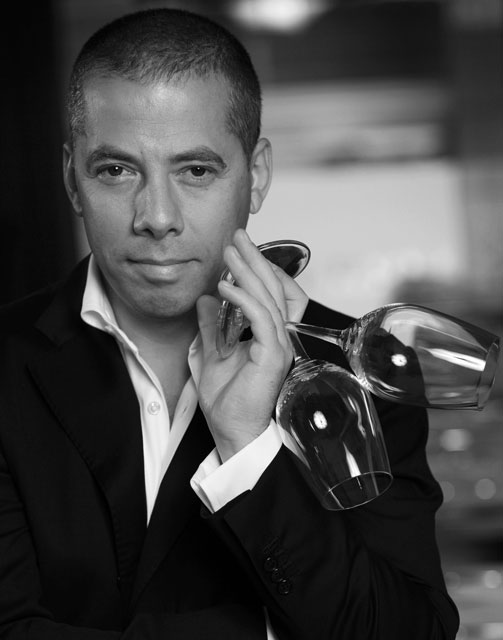 It was back in 1992 that Arkady opened his first restaurant.  Still run today on the same principles of quality food, service, design and atmosphere on which it was founded nearly 20 years ago, Sirena laid the foundations for his empire.  Since those early days, Arkady’s name has become a byword for quality dining in the city, with a clientele that includes everyone from Vladimir Putin and Bill Clinton through to Naomi Campbell.  Indeed people go to a new Novikov restaurant simply because he is involved.

Having conquered his homeland, Arkady Novikov is now set to become a global restaurateur with the opening of Novikov Restaurant & Bar in the heart of London.

There is little doubt that, for those with the money to enjoy it, London is one of the most exciting and cosmopolitan cities in the World, which, combined with being one of the safest cities in which to live, makes it a very popular choice for Russian Oligarchs, Chinese Billionaires and Indian Steel Magnates.

Consequently it is difficult to impress in London, but one place which really does is the uber trendy N0vikov.  When I recently telephoned a very important Russian client of my Fine Art and Antiques business to ask where he would like to meet, I was told to be at Novikov at 12 noon, in the Lounge Bar which is very ‘Russian’, and clearly a power-brokers paradise!

Novikov is definitely the place to be seen these days, but unlike many fashionable places, this one really lives up to its reputation.  Located in the heart of Mayfair, Novikov Restaurant & Bar combines a superlative culinary offering with innovative contemporary interiors.

The venue is divided into two distinct dining areas.  The main entrance off Berkeley Street leads into the Asian Restaurant where cool granite walls compliment the striking lacquered ebony bar-counter decorated with a jade stone belonging to Arkady Novikov himself.

The Asian Restaurant specialises in Chinese and Pan Asian Cuisine with a menu designed by highly skilled and experienced Japanese-trained Head Chef Jeff Tyler.  Tyler is known for his love of experimenting with different textures, flavours and ingredients, a talent that is much in evidence in dishes such as King Crab with Penang Sauce and Pork Belly with Spicy Glaze.  Also on the menu is an extensive range of sushi, dim sum and barbecued and charcoaled dishes, Spicy Lamb Cutlets and Miso Black Cod included. 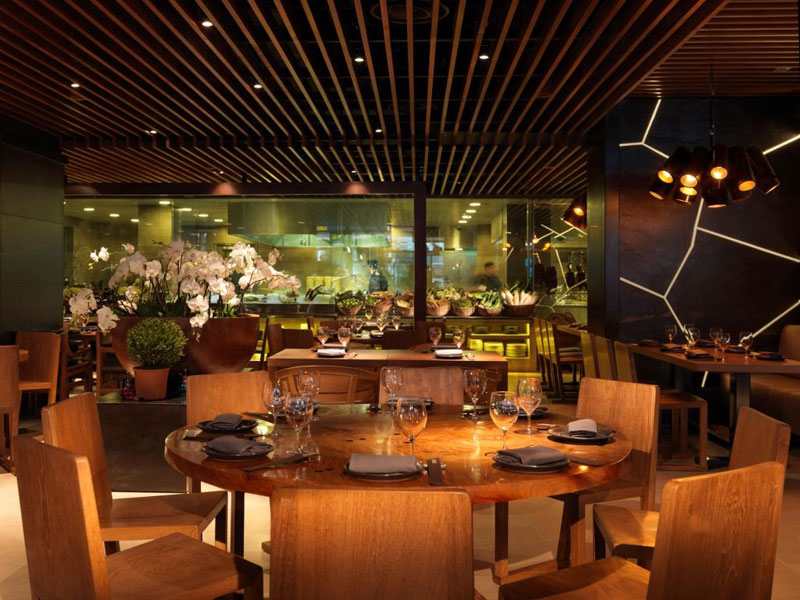 The Asian Restaurant at Novikov

A real feature of the Asian Restaurant is its open kitchen.  Fronted by an amazing display of seafood and vegetables, it evokes the atmosphere of an Asian food market.

The Italian Restaurant meanwhile offers regional Italian fare with a contemporary twist.  Created by Carmelo Carnevale, the menu comprises a superb assortment of antipasti, Tartare di Salmone o Tonno and Carpaccio di Manzo among them, followed by a selection of homemade pasta.

The Italian Restaurant at Novikov

The Italian Restaurant offers a very different ambiance.  Although still modern in design, it has much more of an elegant feel, complete with an imposing wood-fired oven, suede wall panelling, handmade Moroccan tiles, mirrors in solid oak frames and chandeliers with candles.  Complex, state-of-the-art lighting systems can change the atmosphere from sunrise to sunset, from season to season. 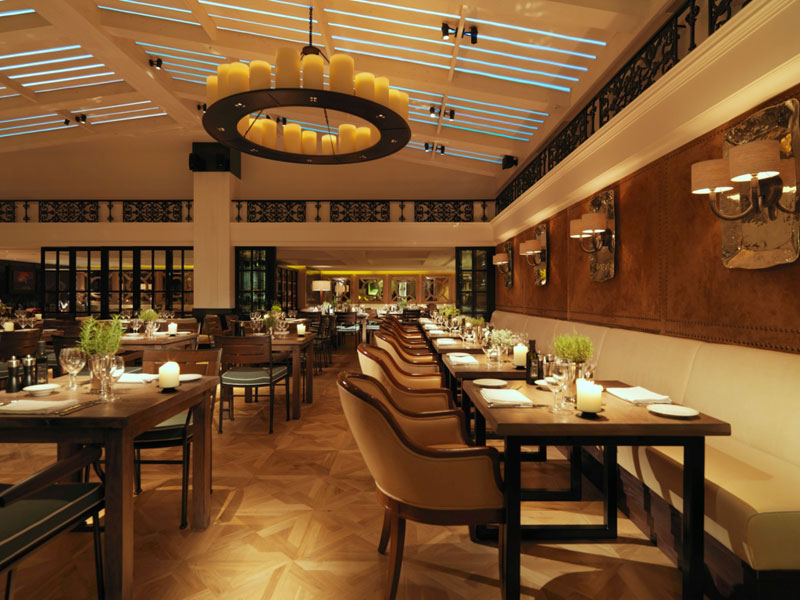 Additionally, a standalone Lounge Bar is set to become a must-visit destination, with its extensive cocktail menu, live music and performances by some of the world’s top DJs.  The Lounge Bar is furnished with an eclectic collection of objects from different countries and periods.  Guests will find antiques placed next to contemporary furniture, Asian accessories next to classical chandeliers and brightly coloured velvets next to antique leather. 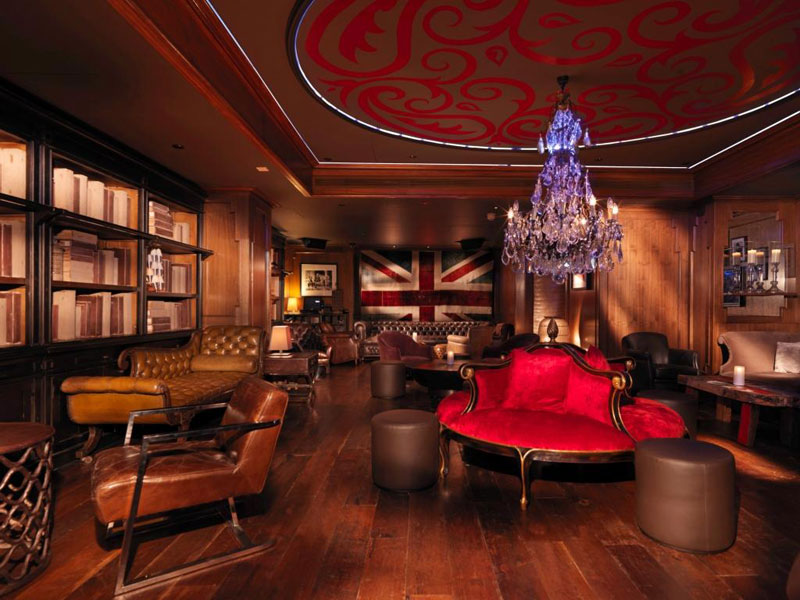 The Lounge Bar at Novikov

The owner, Arkady Novikov opened his first restaurant in 1992, armed with a loan of $50,000.  Today his Novikov Restaurant Group employs 7,000 people in more than 50 restaurants across Moscow and St. Petersburg.

Russia’s most famous and successful restaurateur was born in Moscow in 1962.  He was raised by his mother, a kindergarten teacher, and his grandmother.  It was the latter who first taught Arkady how to cook, albeit reluctantly as she considered it ‘women’s work’.

Novikov attended Culinary Institute No. 174 – where today a plaque proudly proclaims ‘Arkady Novikov graduated from here’ – and then spent two years in the army, where he was posted to Georgia.

Back in Moscow he enrolled in the Plekhanov Russian Economic University to study food-service industry economics.  It was here that he met his wife, Nadezhda, who now runs the family’s floristry business, Studio 55.

Novikov began his professional life as a cook at the restaurant Universitetsky and by 1990 had risen to the position of Head Chef at Moscow’s Hard Rock Café.

In 1992 he persuaded a friend who ran a cargo business to give him $50,000 in return for a 50 per cent share in a new restaurant called Sirena.

Still run today on the same principals of quality food preparation, service, design and atmosphere on which it was founded nearly 20 years ago, Sirena laid the foundation for the development of a new post-Soviet Russian restaurant business.