Just over a year ago, we published a review of Novikov, called ‘The Russians are Coming’, about the Russian-owned complex of two restaurants (Asian and Italian), and a large Bar and Lounge at a lower mezzanine level at 50, Berkeley Street in the heart of Mayfair, because it was already establishing itself as ‘the’ place to see and be seen, and on our recent visit it was evident that this remains the case.

When we arrived for dinner at 9.30pm, the whole place was buzzing, with its two large restaurants filled to capacity, and the Lounge Bar pounding to a techno beat! This is not a place to dine quietly, or cheaply, but the quality of the food is sensational.

It is very rare in establishments like Novikov that the food lives up to the general ‘hype’ of the place, but at Novikov, it does! 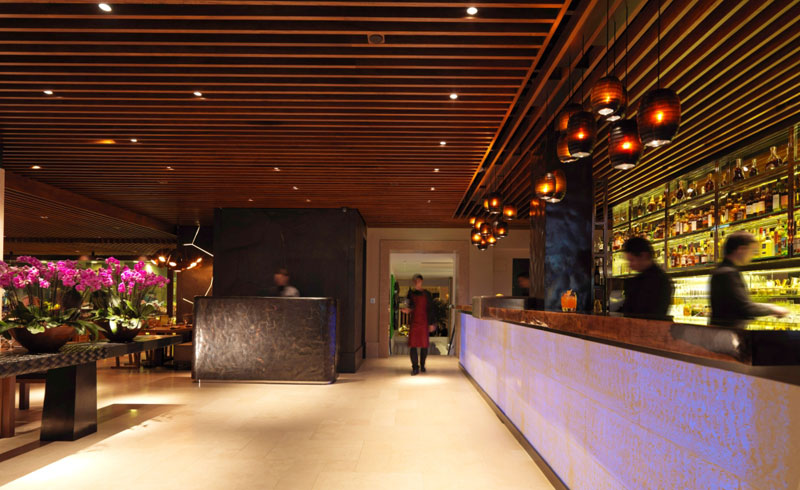 The imposing entrance off Berkeley Street leads into the beautifully designed Asian Restaurant where cool granite walls complement the striking lacquered ebony bar-counter set with a jade stone. The natural materials used in this area – wood, stone and leather – are offset by subtle features such as a wall… of cracked stone and bamboo chandeliers.

The ambiance is designed to be welcoming and relaxing, but subtle enough not to distract from the food itself. The centerpiece of the Asian Restaurant is its open kitchen, fronted by an amazing display of seafood and vegetables, which evokes the atmosphere of an Asian food market. 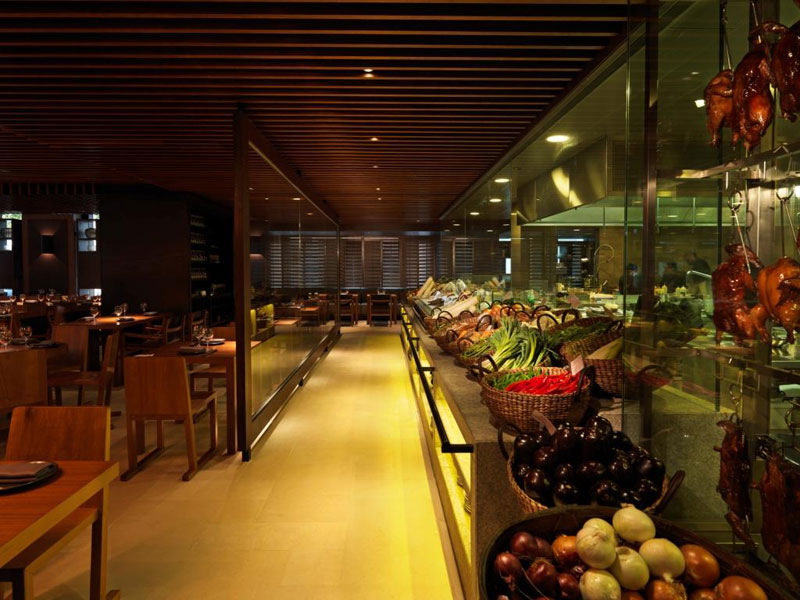 The Asian Restaurant specializes in Chinese and Pan Asian cuisine, with a menu designed by highly skilled and experienced Japanese-trained Head Chef Jeff Tyler. Tyler is known for his love of experimenting with different textures, flavours and ingredients, a talent that was much in evidence as we sampled his creations.

Being relative novices to such a vast and innovative Asian menu we were guided by our waiter and chose Sicilian Red Prawn Tempura and crispy Peking duck and green apple salad to start with, followed by a steamed seabass with ginger and soy and spicy glazed lamb cutlets accompanied with grilled shitake mushrooms and Singapore noodles with pork and prawns, finally topping off with banana crumble served with salted caramel ice cream and mango soup with pomelo and coconut rice pudding beignets.  All we consumed was delicious and as one can observe from the description of our chosen dishes, the influences for his creations are not solely Asian but have hints of many cuisines.

Novikov clearly sources the best quality ingredients from all over the world, and utilises skilful innovation and preparation from Japan and China to preserve the essence of the product, which it definitely succeeds in doing very effectively.

The clientele at Novikov is truly cosmopolitan, and the night we dined there, you could hear half a dozen different languages being spoken, but only just, above the disco music emanating from the lounge bar in the basement.  I am assured this is a must-visit destination, with an extensive cocktail menu, live music and performances by some of the world’s top DJs’, but sadly, not for me!

What is evident is that Novikov remains ‘the place to be’ for that powerful, affluent, hedonistic, cosmopolitan group which form its loyal customer base, and it has recently opened a Brasserie in Knightsbridge.

Fans of Berkeley Square’s Novikov will know what to expect from this Knightsbridge sibling: pan-Asian food for a moneyed international crowd is the order of the day.

However, I am assured that, unlike the original, this outlet is emphatically a neighbourhood brasserie – albeit one pitched at locals with unlimited funds, so I look forward to discovering the joys of Novikov Knightsbridge, in the near future, and will report back!

To experience the above, book a table at Novikov Restaurant & Bar, 50 Berkeley Street, London, W1 tel: 0207 399 4330 or visit their website at  www.novikovrestaurant.co.uk 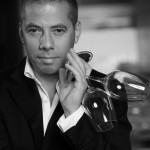 Arkady Novikov is Russia’s most famous and successful restaurateur, and heads an empire with more than 50 restaurants throughout Moscow.  He has put an individual stamp on each of his restaurants, enthused by different regions of cuisine.

The man with The Midas Touch, his organisation includes supermarkets, florists and a 15 acre farm, with some 7,000 people in his employ.

It was back in 1992 that Arkady opened his first restaurant, Sirena, which laid the foundations for his empire and is still run today on the same principles of quality food, service, design and atmosphere.

Since those early days, Arkady’s name has become a byword for quality dining in the city, with a clientele that includes everyone from Vladimir Putin and Bill Clinton through to Naomi Campbell.  Indeed people go to a new Novikov restaurant simply because he is involved.

Having conquered his homeland, Arkady Novikov is now set to become a global restaurateur with the opening of Novikov Restaurant & Bar in the heart of London.

There is little doubt that, for those with the money to enjoy it, London is one of the most exciting and cosmopolitan cities in the World which, combined with being one of the safest cities in which to live, makes it a very popular choice for Russian Oligarchs, Chinese Billionaires and Indian Steel Magnates, many of whom lunch or dine at Novikov.

It would seem that Arkady Novikov has discovered a new territory for his iconic, eponymous restaurants.  London is a fertile hunting ground for the cosmopolitan hedonist with unlimited budgets and an avaricious appetite for the best of everything and London is the one place in the world they can be sure to find it.

I predict that Novikov will open many more restaurants in London with Chelsea, Kensington, St. James’ and the West End beckoning.

Robert Jarman, editor and founder of The Vintage Magazine