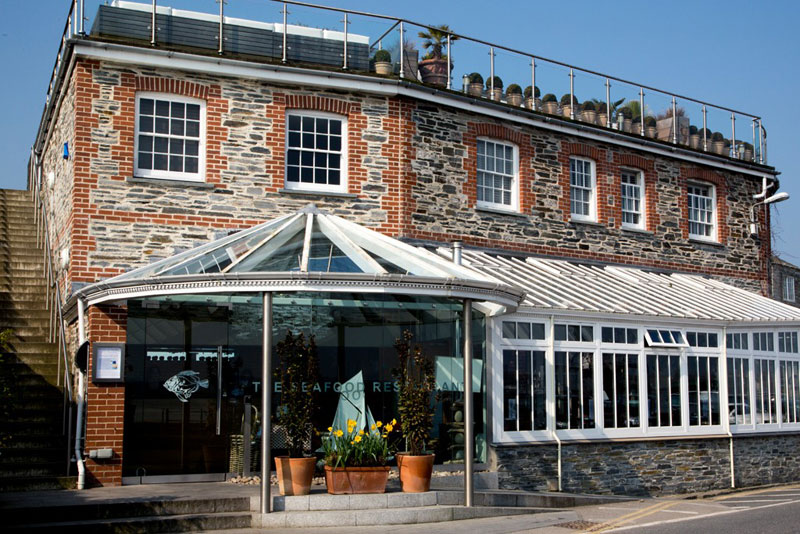 In the past year, the Rick Stein story has been turned up a notch as this well-known ‘Brand’ has been developed and promoted throughout the UK, as one  new restaurant after another has sprung up in every affluent town.

Our first encounter was at Sandbanks, notoriously known as having some of the most expensive real estate in the world, and then at what was ‘The Depot’ a well-loved riverside restaurant in Barnes, where it is now ‘bedding down’ nicely as a new Rick Stein.

Bearing in mind the extraordinary success of the Rick Stein brand, we thought we would go to where this empire was launched, the internationally recognised Seafood Restaurant in Padstow, Cornwall.

There are those who might think that every residential property, shop and restaurant has been snapped up by the Stein Company for so far there is the flagship Seafood Restaurant with 16 bedrooms; St. Petroc’s with its bistro restaurant and 10 rooms and Ruby’s Bar; Rick Stein’s Cafe with 3 rooms; St. Edmunds House with 6 rooms; Prospect House with 4 rooms and Byrn Cottage.  That’s the accommodation and eateries but in addition to these there is Stein’s Patisserie, Stein’s Gift Shop, Stein’s Fisheries and Seafood Bar, Stein’s Fish and Chips and Stein’s Deli and finally, but a major contribution to making Padstow a food enthusiast’s destination is the renowned Rick Stein’s Cookery School.

In addition to the properties in Padstow there are also two other places to rent; Stein’s at Trevone Farm, close to Trevone Beach and Martindale at Penrose both of which sleep up to eight.  So whatever accommodation you choose, if the rooms we stayed in at The Seafood restaurant and St. Petroc’s is an indication of the standard then we can safely say that you will not be disappointed – great places to book for a family Christmas!

So it is no surprise that it is known locally as Padstein, which may denote an element of respect, if tinged with a little resentment, for a man that has brought millions in tourism and investment and created thousands of jobs over several decades.

However, none can dispute that whatever has been given the Stein brand has been done to the highest standard and with great flair.

It must be mentioned that Rick Stein has the headline name but it is his former wife, Jill and their eldest son Ed who are responsible for all interior design of each new property that comes under their wing; middle son Jack is Chef Director for all the restaurants and is becoming somewhat of a ‘celebrity’ chef in his own right and there is the youngest Charlie who has the enviable role of tasting and selecting the wines and beers for their restaurants – so very much a family affair.

Certainly, the annual, affluent visitors to nearby Rock and Polzeath are delighted to have a number of impressive dining establishments. Regulars have been known to book a year ahead in order to reserve their favourite tables in their favourite restaurants to ensure themselves quality food whilst on holiday!

This might explain why Rock and Polzeth are known affectionately as Chelsea on Sea, or Hampshire on Sea if like us you live in Hampshire.

This was not our first visit to Padstow.  We have memories of long ago when the great British seaside holiday was a much less glamorous affair and the food from local restaurants and cafes was somewhat lacking in sophistication but that has all changed, this being in no small part due to celebrity chefs like Rick Stein.  Other well known chefs’, having trained at The Seafood Restaurant have gone on to set up their own restaurants in the area which in turn raises the standard for everyone.  There certainly seems to be room and customers for new establishments which must be very good for the economy of Cornwall and not just in the busy summer months but keeps visitors coming all year round. 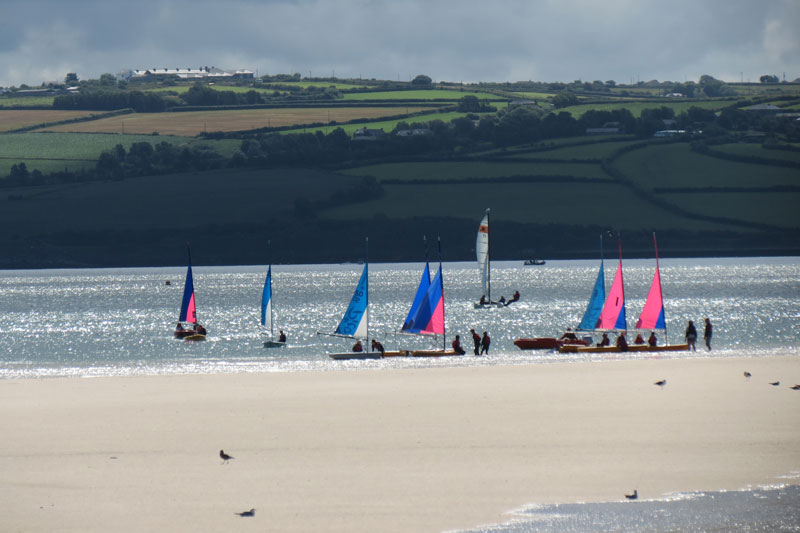 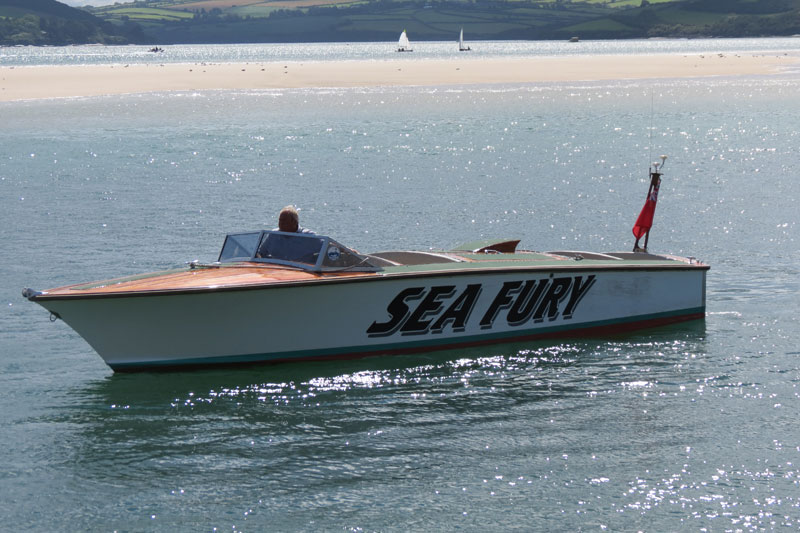 Thankfully there are a few traditional activities in Padstow that are still very popular. A visit to Padstow would not be complete without a trip on the vintage speed boats – our summer weather permitting of course – this trip we went on Sea Fury and we can confirm that it is still great fun!!

But to our opinion of the Rick Stein flagship – does it live up to its reputation and does it deserve to be a gastronome’s destination restaurant?  Well we loved The Seafood Restaurant and our room so much that we decided to stay another night and were fortunate that they had one vacancy at St. Petroc’s.

The Seafood Restaurant is so popular that it appears to be serving food throughout the day and a reservation is a must.  However if you have not booked there may be space at the circular oyster bar which does not require a reservation but operates on a first come first serve basis. 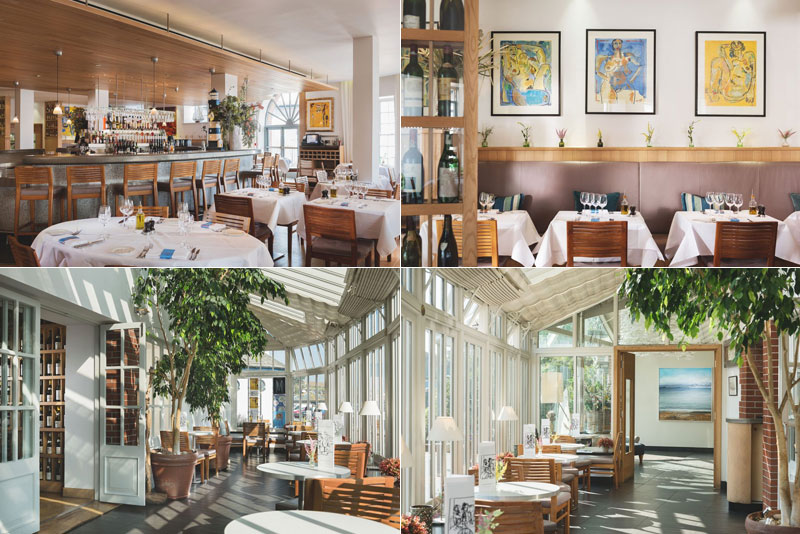 From the outside the seafood restaurant has a glasshouse front with a few tables within this area which overlook the carpark and faces Rock across the estuary – not the most decorative view at that level but this is a working fishing village.  Within the main restaurant the large room is light and open plan with statement art on the wall.  Contemporary art is a common theme throughout the Stein restaurants we have visited.  There is a great atmosphere in the room and you are aware of the other customers but not so much that you feel overlooked.

As with all his restaurants the menu choice is such that it’s impossible to make a quick decision and you eyes keep darting from one tempting offering to the next – do you go for traditional or try one of Rick’s recipes inspired from his extensive travels?  If one could afford to visit one of his restaurants on a regular basis you could eventually work your way through the menu but unfortunately for most of us this is a special treat.  So eventually the waiter will be asking are you ready to order and you have to declare your preferred dish.  After much deliberation we chose to start with Lobster and fennel risotto with lemon oil – just enough not to fill you up too much, and the Ceviche of Monkfish with avocado, red onion, coriander, tomatoes and chilli – refreshingly light and a perfect starter.

One of our main courses was Padstow lobster grilled and served with mayonnaise.  Just a word in praise of the staff both in front of house and the kitchen; my husband finds it very irritating and time consuming to manage the various cracking devices required to get to every last precious piece of flesh from a lobster, so we asked if we ordered this would it be possible to have the lobster served de-shelled.  Without hesitation we were assured that this would be no problem whatsoever.  Considering how busy the kitchen would have been we were very impressed and hoped that the chef would not appear with a meat cleaver in his hand to chase us from the restaurant – with some precious prima donna chefs this has been known!

My roast wild turbot with hollandaise sauce served in the English style, simple and probably a nicer way of eating this wonderful fish than anything more elaborate with minted Cornish potatoes and kale from Trerethern Farm sautéed in olive oil with confit garlic.  You may note that I am quoting from the menu which does put it so succinctly that I can add no more in praise of this noble fish which was cooked with great respect.

To our great regret we had no room for puddings but just ordered coffee which came with its own sweetmeats which served perfectly as a sweet ending to our delicious meal.

After a good night’s sleep we were awakened by the screeching of seagulls, a constant background noise reminding us that we are in a fishing village.  Breakfast is again served in the main restaurant and we were presented with an array of choice and the option of a cooked breakfast – I felt it imperative to order poached plump Cornish kippers.

Later that morning as lunch time approached we returned to the Seafood Restaurant and since the sun was shining we ordered a bottle of rose and retired to the rooftop terrace which unlike the restaurant below has stunning views over the estuary and Rock and Polzeath beyond and The Rick Stein Cookery School.

We believe it must be concluded that Padstow has benefited immensely from the Stein brand and definitely worth the journey to Cornwall.  If you have only had a Rick Stein meal at one of his high street restaurants at Winchester or Marlborough we feel that the combination of water and seafood with perhaps the addition of seagulls screeching overhead can only add to the whole delicious culinary experience.