Located in the south-eastern part of Italy, Puglia (or Apulia) is an undiscovered gem for wine lovers. The name Puglia originates from the Roman “a-pluvia,” which means “lack of rain,” and this is a region with a very long history of civilisation dating back to the 8th century BC, when the Messapians arrived here.  Beautiful coastline, ever-presenting sunshine, clear blue sky and abundant wine, Puglia is ideal for wine lovers; no wonder in 2013, Wine Spectator nominated Puglia as one of the 10 best wine travel destinations in the world.

Viticulturally, Puglia can be divided roughly into three areas.  Around the town Foggia in the north, the main grape varieties are Trebbiano, Sangiovese and Montepulciano.  Near Bari in the centre of Puglia, local indigenous variety Uva di Troia is showing great potential.  The southernmost part of the region is Salento, which is possibly the most well-known area for wine production in Puglia and is surely worth of exploring.

To visit Puglia, you can either go to Bari or Brindisi international airports. But the closest airport to reach Salento is Brindisi. 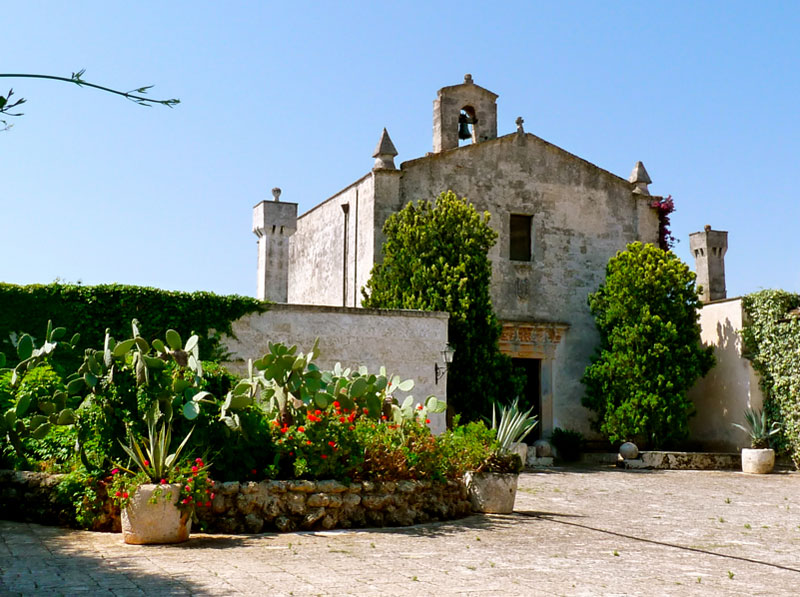 Once landed, there are already two wine estates in town that are interesting for a visit. Agricole Vallone is a member of the prestige Italian elite producers “Grandi Cru d’Italia”(Grand Cru of Italy). To be a member of this by invitation only group, the wine estate has to have long history and needs to have at least one premium wine that has been widely recognised by authoritative press. In the case of Vallone, it’s their “Graticciaia,” which is produced by 100% Negroamaros that have been sun-dried for 2-3 weeks after harvest. The wine has intense aromas reminiscent of black plums, mixed berries and with a tiny bit of herbal fragrance; quite fruity and very clean on the palate with long finish. This is a wine that shows both the potential and capability of this local grape variety.

Brindisi is also home to Tenute Rubino.  It is one of the Salento producers who is a serious advocate for the ancient grape variety local to Brindisi area, Susumaniello.  This variety has long been considered as a lesser one and is a blending partner mainly for Negroamaros.  Twenty years ago, it would be unthinkable for people to see a single varietal Susumaniello wine, but now, a few producers (Cantina Due Palme, Masseria Li Veli etc.) have tried to make interesting wines out of this variety and the result is promising.

Moving further west from Brindisi, about 15 minutes drive from the airport, is the charming small town, Mesagne.  Because of its strategic position geographically, as early as the 8th century BC, there were already signs of the first settlers Iapigi.  The Messapi, who were the second most important group of Puglian settlers, arrived right after that and left various archaeological sites in town and in the countryside.

In the center of the town is the 11th century Castello (castle).  There is a museum inside with a good collection of remains from the Messapian civilization dating from the 6th to 2nd century BC (Entry: €3/€2).

Being small, Mesagne is quite easy to wander around.  There are a few places for wine lovers.  If you want to try many Puglian wines in a short space of time, Giudamino Vineria (Piazza Commestibili) is a good place to go. 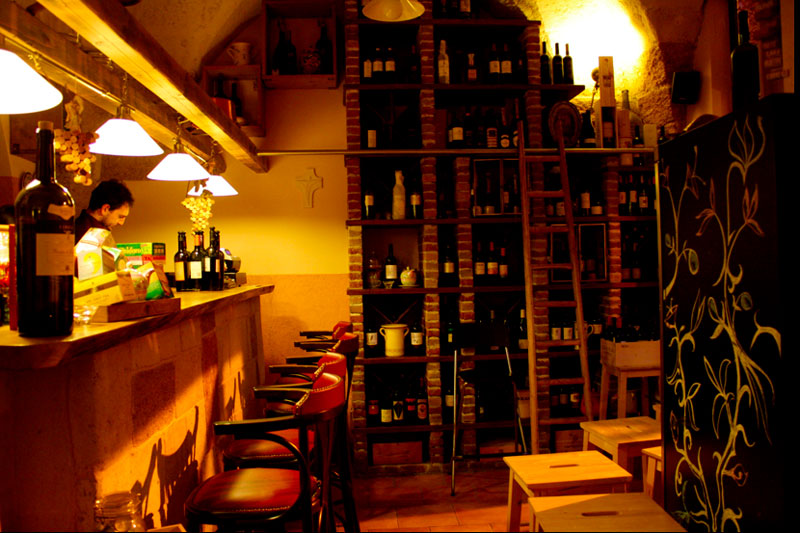 They have an incredible wine list with detailed information.  You can order by glass (€3-4 in average) or by the bottle.  Wines from other regions are available as well.  Also quite close to the castle is Divino Enoteca (Vico Quercia, 7), which is another good option for wine lovers.

Just behind the Castello, there is an interesting wine shop to visit.  Libera Terra (Via Vico dei Cantelmo, 1) is an organisation which aims to utilize the confiscated land from the Mafia and turn it into organic vineyards and vegetable fields. 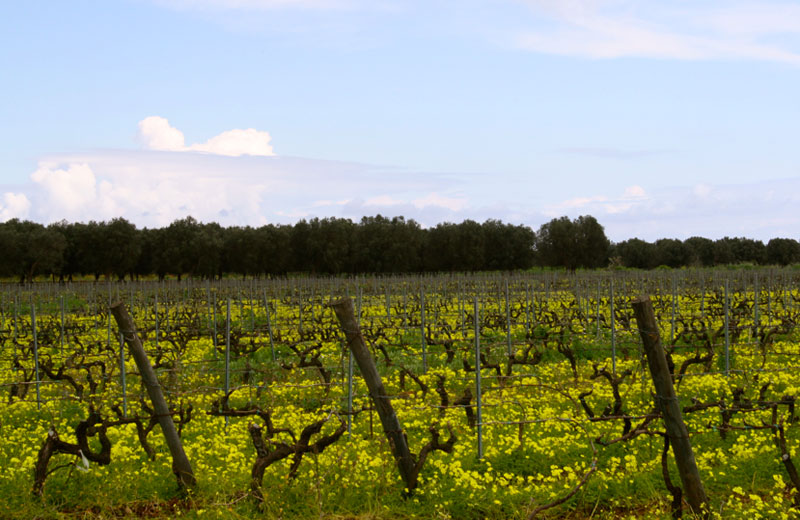 You will be able to find different organic wines made from local star varieties, Negroamaro and Primitivo, as well as other organic products such as pastas, artichokes and tomato sauce etc.  Cantina Due Palme (Via Brindisi) which is a well-known large wine cooperative in the region opened its first shop in the heart of Mesagne.  You could buy wines from this producer here or get an empty plastic container (3 or 5 litres costs €0.50) from the shop and ask the staff to fill it with ‘house wine’ made from local varieties for you (€1.30-1.80 per litre), just as the locals would do. 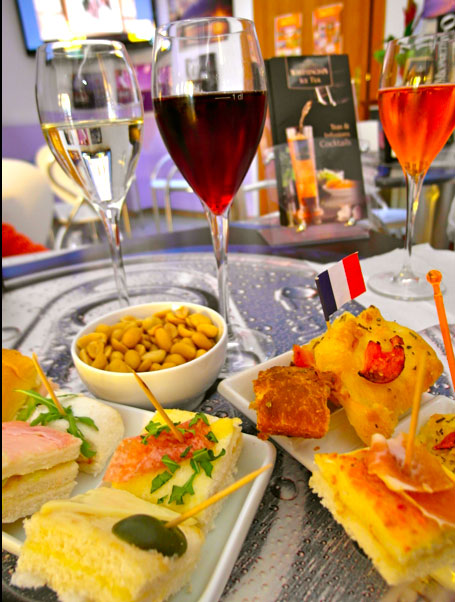 Bar Solaris (Di N. Abbracciavento, Via L. Di. Savoia, N. 2, Mesagne) opens 24 hours a day and is arguably the most popular coffee/bar in town. Offering Italian breakfast with a sweet pastry and a coffee at €2.  Pre-meal aperitif at €4, with a glass of Prosecco and homemade savoury pastries.  No wonder it’s so well-liked by the local and is able to sell around 400 breakfasts a day!

Around Mesagne, there are a few other wineries which are worth visiting.

In Cellino San Marco, you can find Masseria Li Veli, an amazing wine estate with 33 hectares of organic vineyards.  In addition to the famous Negroamaro and Primitivo, they also have a fantastic 100% Susumaniello and a sweet but rare Aleatico.  Nearby, you can also visit the winery of Cantina Due Palme.

Other places of interest in the region including the historical city of Lecce, which is about 40 km south of Brindisi.  For those who are fans of Primitivo, Manduria in the west of Salento is the area that you shouldn’t miss.  Further north, visiting the beautiful white city Ostuni is a must.

If you have more time, why not make a day trip to the UNESCO World Heritage Site in Alberobello, which is about 80 km north of Mesagne, you will surely enjoy the amazing fairytale-like landscape of the cone-shaped houses “Truillies.” 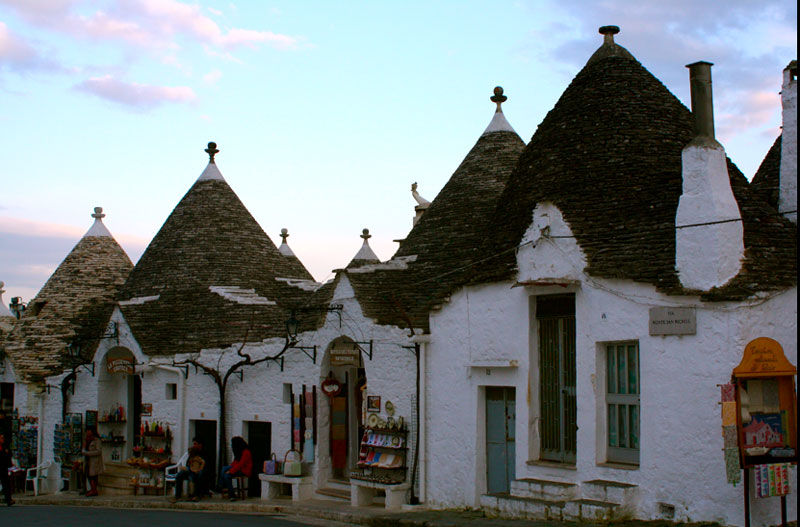