I had heard this many times: “In Basque country, you eat and drink very well.”  To put this to the test, I packed my bag in mid June and headed to San Sebastián in Northern Spain.

Before my departure, I did have my doubts.  Because of Vinexpo, which happens every two years in June in Bordeaux, I had been frequently travelling to this part of Europe during this period of time.  But I didn’t have any luck in visiting the coastal cities by the Atlantic Ocean without a rain jacket; it had always been very wet and windy.  However, it all changed this time; the weather was perfect when I arrived in San Sebastián. No rain, not even a drop during my entire stay!

Once reaching San Sebastián, you can feel somehow the city is buzzing. It’s very modern but at the same time, full of history.  The city is really charming in a posh way.  San Sebastián prides itself on having one of the best in-city beaches in Europe. 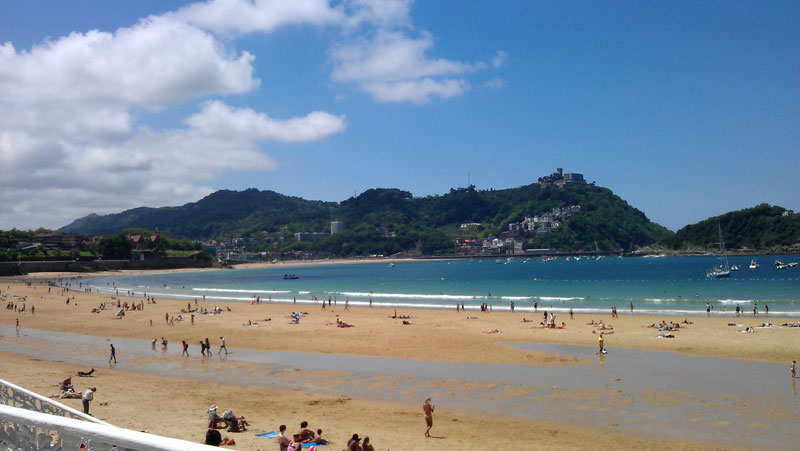 In fact, there are three beaches in town all within easy reach. Take a stroll along the promenade at the famous La Concha beach is a must. This shell-shaped white sandy beach with dazzling turquoise waves is mesmerising: crowded and jubilant during the day, but tranquil and serene when it’s dark.

After enjoying the beaches, you can walk through the villages towards the west of the town and take the funicular railway to the summit of Monte Igueldo. From atop, you will be amazed by the panorama view of this beautiful coastal city.

Heading to the east part of the town, the 300-plus steps will lead you to the top of Monte Urgull where the Castillo de la Mota is located and many of the canons are still on display.  At this well-maintained 12th century military fortress, the 12 metres high Sacred Heart statue (Cristo de la Mota) is the focal point, which can be seen from all over the town and even from 4 miles out to sea.

L to R:- Sea view from Kaskazuri ; Kaskazuri restaurant in San Sebastián, recommended by the locals and it was very good and great value for money; Food and wine at Kaskazuri; Hake, the local specialty

After the beach and the city tour, it’s time to explore this food and wine paradise. San Sebastián boosts itself as the city with the most Michelin-starred restaurants in Europe. In fact, there are 14 stars in total, and three restaurants are awarded three Michelin stars. The best thing about San Sebastián though is that the gastronomic experience exists at all levels of culinary spectrum, and it has to start with Pintxos (Basque, meaning “bar snacks” or “Tapas” in Spanish), which is considered as “Nanogastronomy” or haut cuisine in miniature. 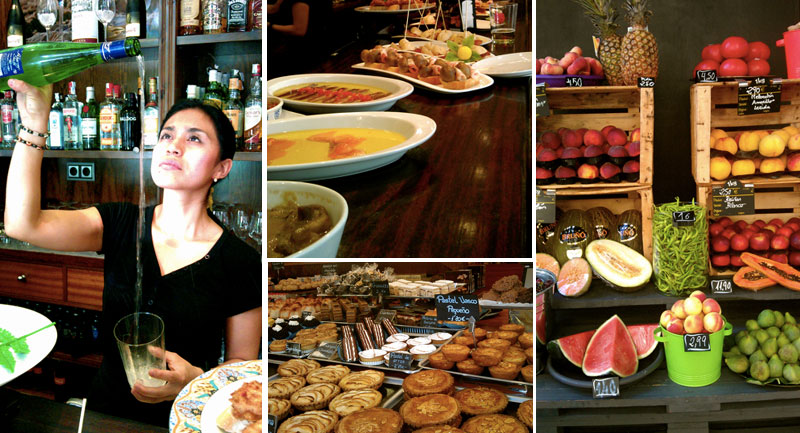 Once entering a typical Pintxos bar (there are many of them), either big or small, what you can see is a display of a variety of small savoury delicacies on the bar counter that you can choose from.  Be it a simple roulade of scrambled egg, juicy wild mushrooms or marinated octopus, the limitless raw ingredients might be humble but the flavours are indescribable!

Enjoy local food with local wine, Txakoli, is de rigueur. In this small Basque country, there are actually three DO wine regions (DO, designations of origin,  similar to the French AOC appellation system): Getariako Txakolina, Bizkaiko Txakolina and Arabako Txakolina. Getariako Txakolina is the main appellation though is still tiny compared to other Spanish DO regions, and this will most likely be the wine that you have when in San Sebastián. Hondarribi Zuri is the main white grape that goes into Txakoli. Young Getariako Txakolina is normally a bit fizzy but very crisp, tangy, lemony and slightly salty.  It goes well with Pintxos or as an aperitif on its own.  Older Getariako Txakolina is more yellowy in colour, showing appley aromas and more intense flavours, equally charming and enjoyable with seafood dishes.  There are no vineyards or wineries to visit in San Sebastián but they are within very easy reach.  15 miles west of San Sebastián, two coastal towns Zarautz and Getaria are the best places to sample more of this local pride and see how growers conquer this sometimes dreadful Atlantic influenced climate in order to make such delicious light wines. But if you are not a keen white wine drinker, don’t forget due to the proximity, there are plenty of other options from Rioja Alavesa (also in Basque country) or wines from nearby Navarra for you to enjoy. 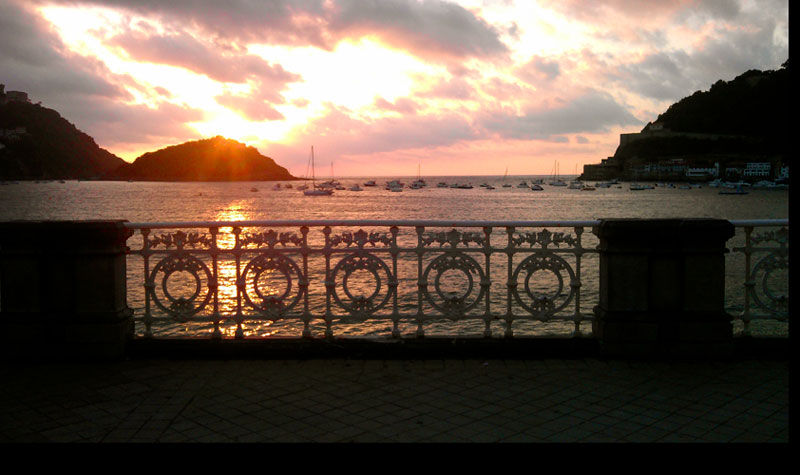 Sunset, overlooking from the promenade at La Concha beach

After just a few days in San Sebastián, I have thoroughly fallen in love with this charismatic coastal city. For foodies and wine lovers who also love picturesque beaches and scenery, San Sebastián is indeed second to none!