Sir Joseph Nickerson, Joe to his friends, was an extraordinary man, and I was therefore delighted to be asked by Robert Jarman, the editor of The Vintage Magazine, to write an ‘Appreciation’ of him in this, the centenary year of his birth, which seems particularly fitting.

As his youngest daughter I sadly only had the privilege of knowing him for 21 years, but he moulded me into the person I am, introducing me to shooting and conservation from a young age, instilling the importance of etiquette on the field – and off it.

Born in April 1914, the eldest of seven brothers and sisters, my father grew up in the Lincolnshire Wolds, on the family farm in Thoresway, a few miles away from the estate he created at Rothwell.

Joe’s love of shooting stemmed from a childhood of scrambling through hedges and ditches with his beloved younger brother Sam on their family farm.  Sadly in the Great Depression, the family business and their farm was lost and after his father’s premature death, Joe found himself head of the family aged just 21.

He pledged to look after all his siblings, one of whom was just two years old, and he became a generous benefactor to all of them, throughout his life, and after his death.

Joe had a quick wit and an encyclopaedic knowledge of shooting, conservation and farming. In fact he always described himself first and foremost as a farmer.

He inspired great loyalty from his friends, work colleagues and employees, many of whom had worked for him or with him, for over 30 years. His unexpected death in Florida in 1990, left a huge void in so many people’s lives.

Joe’s love of shooting defined his life. He often said shooting was like ‘a religion‘ to him. He wrote a book, A Shooting Man’s Creed, in 1989.  It is considered by many to be a shooting bible, and it has been reprinted several times.

Joe was probably one of the best shots of his generation and he regularly shot six days out of seven.  He was often described as a modern day equivalent to the second Marquis of Ripon, born in 1853 who holds the greatest recorded lifetime bag of birds shot, some 556,000. In fact my father shot around half that number. The crucial difference being, that my father created his own wealth and shooting estates, he did not inherit them.

For Joe was a very successful entrepreneur. Without his success in business he could never have invested the time and money to become the legendary shot he was.  He created and developed two well-known companies, The Nickerson Seed Company and Cherry Valley Ducks. Founded by Joe in the late 1940s,The Nickerson Seed Company, based in Rothwell, was a wholly owned plant breeding company, which introduced over 80 cereal varieties to the UK and still accounts for a large proportion of the UK cereal market.  The introduction of winter barley in the UK was another of his ideas. At one time Nickerson varieties accounted for over 90% of the national acreage.  He sold the business to Shell in the 1970s.

Joe’s active interest in selective breeding and improved varieties led him to found Cherry Valley Farms Ltd in 1960, a duck breeding company, also based in Rothwell. In its first year, it produced 1,000 ducks, and it went on to become the world’s leading supplier of breeding stock; its activities extended to over 80 countries and at its height it produced over 10 million ducklings per year, becoming the UK’s leading duck producer in the 1980s.

He received the Queens Award three times for his businesses and was knighted for his services to Agriculture in 1983.  It all began when at the age of 25, Joe was able to buy and equip the Home Farm at Rothwell, some 600 acres which had previously been part of the Yarborough estate.

Like so many farms all over the country in the 1930s, it was teeming with vermin, with not a single game bird on the place. Joe soon earned the reputation for being one of the most innovative and hard working young farmers in the county.

It is testimony to his hard work and dedication that in less than 20 years Rothwell came to be regarded internationally as a model farm. Farmers and agricultural ministers would come from all over the world to visit. By 1980s, Joe was farming over 3,500 acres in Lincolnshire.

In the early 1950s, Rothwell was gaining fame as a wild grey partridge shoot. In 1952 a team of six Guns, including Joe and his brother Sam, accounted for 2119 wild partridges, which was a world record for grey partridges shot in the UK and the record still stands today.  With changing farming techniques all but eradicating grey partridges, this record is unlikely ever to be broken. HRH The Duke of Edinburgh visited several times to shoot.

In the 1970s, Rothwell was becoming well known as a top pheasant shoot. All the woods Joe planted in the 1950s and 60s in strategic locations above the steep undulating valleys enabled my father to create an impressive range of pheasant drives, showing some very sporting birds. 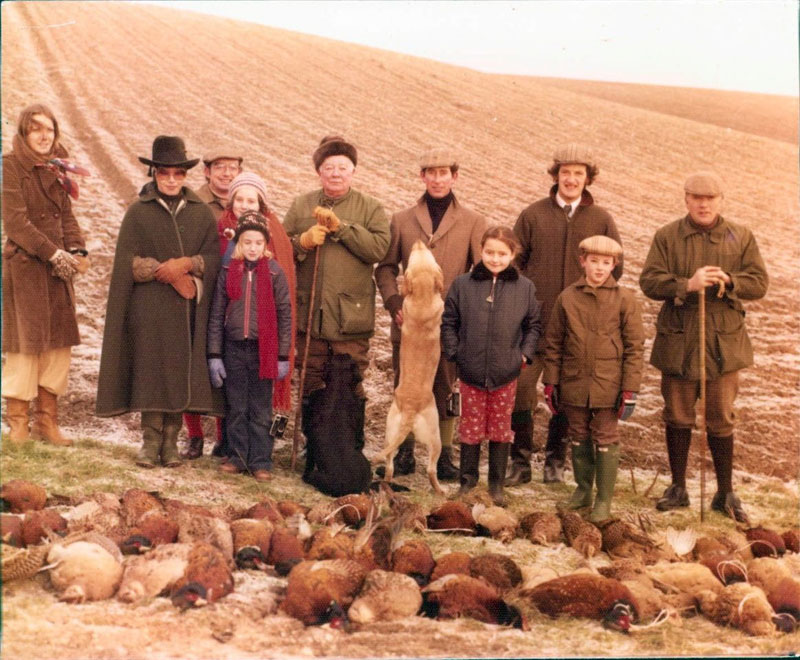 The Nickerson Family with HRH Prince Charles in 1977/8

As Rothwell’s fame grew and Joe’s success in business propelled him into influential circles, he was able to invite some of the leading lights of his generation.  HRH Prince Charles also began visiting annually, as did Captain Mark Phillips, Viscount Whitelaw, Lord Prior and Lord Forte.

Aside from Rothwell, my father’s other great passion was Wemmergill, a famous grouse moor in County Durham. He first shot here in the 1940s, forming a syndicate with farming friends.

He later leased the moor from the Strathmore family in 1952 and spent the next 35 years as sole tenant, improving it tremendously, building miles of access roads and draining vast acres. Wemmergill was a major part of Joe’s life and he loved it more than any of the other grouse moors which over his lifetime, he came to lease or acquire. In a good grouse year he would be able to shoot grouse five or six days a week. Then on Sundays, he’d go wild-fowling on his private wildfowling paradise, Reads Island in the Humber.

Another of Joe’s shooting estates was Nombela, his wild partridge shoot in Spain, where he had shot for several years in the 1970s and 1980s, eventually becoming the leaseholder.

He would spend several weeks shooting there in January and February and his key staff would fly over so that he could oversee the smooth running of his businesses.  Such was Nombela’s reputation as one of the best wild partridge shoots, that HRH the King of Spain visited on several occasions.

My father also enjoyed hunting and spent many happy seasons with the Brocklesby and also the Burton in Lincolnshire, travelling further afield to hunt with the Quorn and the Belvoir in Leicestershire.  After one too many near misses, Joe gave up hunting on his 50th birthday and put his horses out to grass.  He took up skiing instead, a sport he adored but his fear of heights meant he would never get on a chairlift or cable car…

For this reason Joe adored Zermatt, where the top of Gornergrat is still accessed today by cog-railway. He firmly believed everyone should set aside 100 days of the year for their favourite sport.

I remember watching my father in what was to be his last shooting season, aged 75, using a pair of .410s, at Rothwell, to deadly effect. A .410 is a small gun usually used by young children as they learn to shoot, the tiny cartridges have third of the killing power of a 12 bore.

Joe used them towards the end of his life as he suffered from very arthritic shoulders. Despite being on the corpulent side, he was dancing about on his toes, barrels darting this way and that, pheasants spinning down stone dead overhead.  All the time his expert loader was mirroring his footwork behind him, changing guns in an effortless rhythm, honed to perfection through years of practice. Only rarely did a fellow Gun hear a loud cheer echo down the line, as he saluted a bird that had outwitted him.

As is often the case with dynamic and ambitious men, my father had a complicated personal life. In all he was married four times. He was devoted to his children, he had three sons and three daughters and a step-daughter. His youngest son was tragically killed aged 21, in a car accident on the farm in 1971.

During his 75 years, he lived a full and very active life and left a huge mark on the world of shooting, conservation and farming.

If this article has interested you, and you would like to learn more about my father and his passion for shooting, in his own words, his book A Shooting Man’s Creed, is available from Quiller Press at £25. When it was published in 1989, he was thrilled and very proud that it shot into the non-fiction bestseller list and stayed there for several weeks. It has become known as a modern shooting classic.

For the last 17 years, she has freelanced for various different magazines on shooting and other country pursuits, particularly for Tatler, and The Field.

She was lucky enough to have a long country apprenticeship in the shooting field as she grew up in Lincolnshire, in a family who were all shooting fanatics.  As a result she was encouraged to start shooting very young, aged nine.  Ever since, she has shot all over the UK, and parts of Europe, but mostly in the North of England.

She is very interested in all aspects of shooting, from conservation, to shoot management and she is passionate about good manners on the field as well as good sportsmanship.

Her book, How to be Asked Again , How to be the Perfect Shooting Guest, has sold over 9,000 copies since it was published by Quiller Press in October 2009.  It is also selling very well in America and is listed with one of the top publishers.