FOR THE BRITISH OPEN POLO CHAMPIONSHIP

MacDonough made the first mark on the scoreboard for UAE with an accurate 60 yard penalty.  King Power Foxes’ very able Patron ’Top’ Srivaddhanaprabha answered with a field goal and by the end of the first chukka the score was level at 2-2.  The second chukka was disappointing for UAE with two missed opportunities at goal and the Pieres brothers combining well to rack up their score to 5-2.  Chukka 3 opened with Gonzalito Pieres finding the ball from the throw-in and masterfully tapping it all the way to the goal for 6-2.  The Foxes then gave away a penalty which MacDonough saw through the posts for 3-6. Hard marking on both sides saw the half time score creep up to 7-4 in King Power Foxes’ favour.

Chukka 4 opened with a throw in and UAE winning the ball, Facundo Pieres impeded their progress but Monteverde claimed it back and raced away to score a super field goal.  MacDonough was pressured by Facundo Pieres as he made an attempt at goal and the ball went over the boards. The resulting roll-in gave Facundo the perfect chance to pass the ball to ‘Top’ who obliged with his second field goal of the match. The chukka closed at 8-5 to the Foxes.

King Power Foxes’s Patron was unseated in chukka 5 but was able to walk from the pitch, his place being taken by young 1 goal player Kian Hall. As he settled into the match UAE were able to gain some ground and pulled up to within two goals of their opponents, the chukka closing at 10-8 in King Powers’ favour.  However, the final chukka belonged to the blue shirts of King Power Foxes.  Try as they might, the goals simply didn’t come for UAE, one hit going wide and a super ball from young Araya hitting the posts and deflecting. Gonzalito picked up the ball, sent it to Facundo and he was off on his own all the way to the goal and tip, tap, through the posts for 11-8.  The line-out saw Facundo in possession once again, Monteverde saw him off, Stirling passed the ball to Araya who had another try.  But suddenly the ball was with the Foxes’ Hugo Lewis who raced down the pitch to enormous cheers to score his first Gold Cup Final goal.  Again Monteverde gained the ball only to be stolen by Facundo Pieres who off-loaded it to Hugo Lewis who brilliantly secured his second goal of the match and 13-8 for the Foxes.  UAE gave away a penalty, taken by Facundo, moving the score on to 14-8 and soon it was all over.  ‘Top’ Shrivaddhanaprabha had won the Jaeger-LeCoultre Gold Cup at only his second attempt. 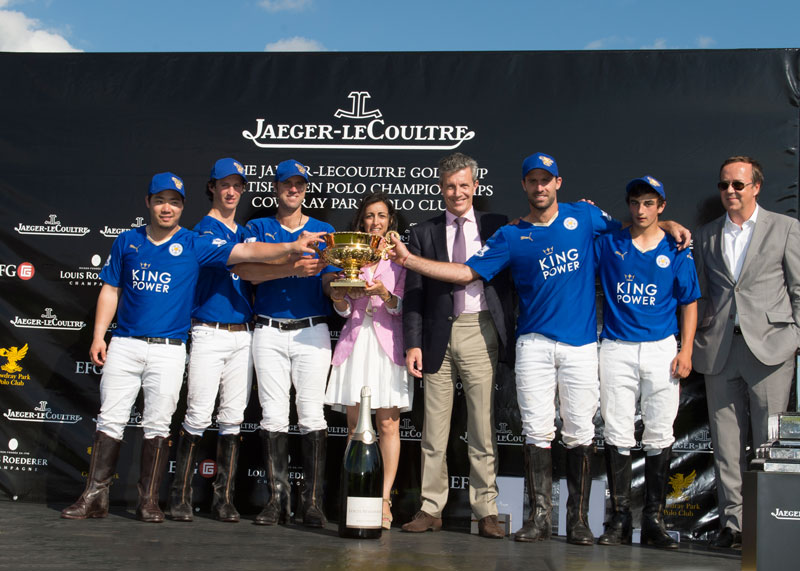 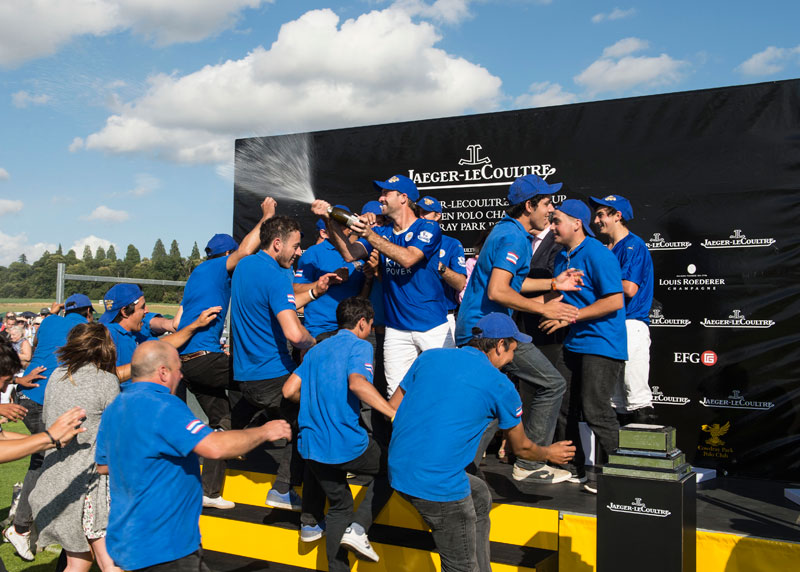 Facu showers his grooms with champagne