Producer George Browne brings us news from the editing suite of CHALK The Movie:

It was with almost audible sighs of relief that filmmakers Chris Cooper and Leo Cincolo replaced the lens caps on their cameras, packed away the drone and switched off the radio mics for the last time in the filming of CHALK. After 20 days of shooting, some blissful and others gruellingly hard work, we’ve finally got everything ‘in the can’, as they say in the trade. 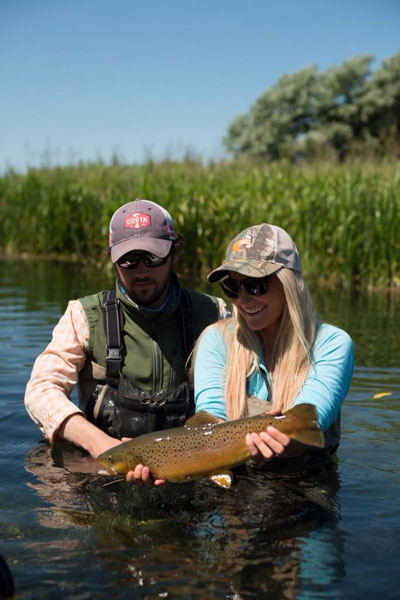 Since the last update in July we’ve been capturing some of the most important elements of the film – taking testimony from experts on the history, ecology and geology of the chalkstreams.

We’ve spoken to fly fishing historian Terry Lawton about the importance and impact of the chalkstreams on fly fishing around the world. The director of the Wild Trout Trust, Shaun Leonard, concisely explains the ecology, geology and geography that makes these magical rivers so special. And renowned writer and conservationist Charles Rangeley-Wilson talked to us about the under-appreciated chalkstreams of Norfolk.

We’ve also been out with Alex Jardine and and Peter McLeod of Aadvark McLeod to discuss the finer points of nymph fishing and visited one of the most northerly chalkstreams – the Driffield Beck – in the company of fly fishing guide Marina Gibson and Frank Mueller, a Kickstarter backer who came all the way from Germany to appear in the film.

When I spoke to Chris and Leo recently they sounded tired, relieved, and excited all at the same time. “We can’t thank people enough for their support and the time given up to make this film a success,” Chris told me on the phone. “We’ve met some fantastic people all over the country and each have their own story to tell about what makes these rivers so special. Can’t wait to get stuck into the edit!”

Marina and Will on the Driffield Beck

As things start to gather pace, we’ve also seen a first draft of a narrator’s script, and it looks like we’re all on the same page, so that’s a relief! Despite Simon’s claims of writer’s block, he’s made a really promising start and the narrative arc of the film is beginning to take shape, something that will really help with the editing process. 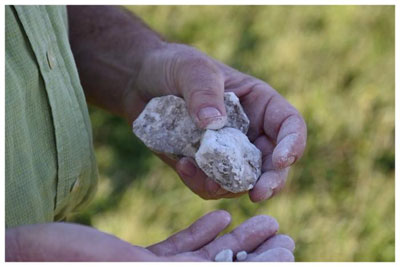 Finally, we’re really pleased to announce that as well as donating a day of fishing to the Kickstarter campaign, actor Jim Murray has kindly agreed to be the ‘voice of Chalk’ and narrate the film. You may recognise Jim from his appearances in Coronation Street, in which he played Sandy Hunter in the late 90s, or from various roles in TV dramas over the years, including BBC crime series New Tricks, Cutting It, Death in Paradise, Midsomer Murders and more recently Suspects and the Netflix series Medici: Masters of Florence. Jim’s not only a keen chalkstream angler, but has a voice whose deep English tones, to my ear at least, provide a fine foil for the high-pitched rippling of a trout stream.

Now that the filming process is complete it will soon be time to start sending rough edits to those Kickstarter backers who signed up to be a part of the editing process, so watch this space.

It’s All About the Chalk

So, we’ve rounded the final bend and are entering the home straight – just a couple of months till we cross the finishing line! Thanks to all our guest anglers, hosts, experts and anyone who has helped us to get this far – your support means everything. It is an oft-used phrase, but without you, none of this would be possible and there would be no film! 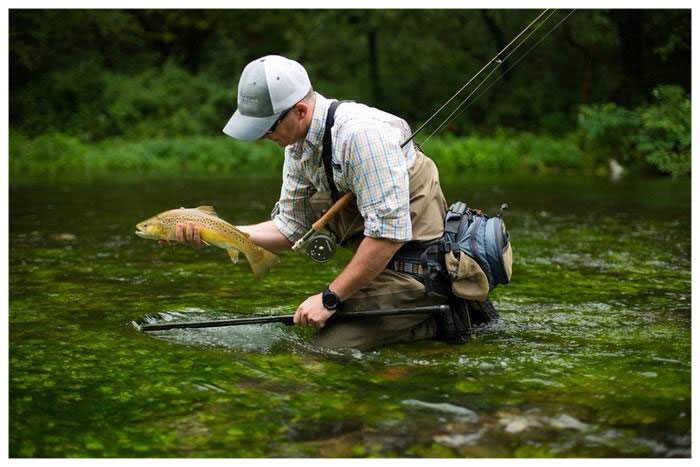 Peter Mcleod at ‘work’ for the camera

The film will be available on FishingTV.com from Friday 24th November.  FishingTV is available as an app for Smartphone, tablet, SmartTV, Amazon FireTV, and online. The pay-per-view platform is free to join and there’s no monthly fee. You can join the FishingTV platform today by going to www.fishingtv.com/register and you’ll get 10 ‘tokens’ (worth about £3) to explore their huge library of fishing content, which covers everything fly related and much more.

Alternatively I will be hosting a special showing at part of the One Fly Festival in Stockbridge at 7.30pm on Friday April 27th 2018. Tickets available on-line as of now. 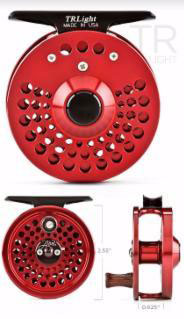 I think it is fair to say that September was a tough month; not so much to do with the rivers which are in fine fettle after a wet July and August but rather finicky fish.

On some days the Guides (and the anglers) were close to despair as the fish lined up but ignored every offering however cunning the ploy or deft the presentation. Then to confound us all you would have a purple patch or particular day when the fish would lock in on a particular hatch or pattern and the living was easy. All very perplexing.

Anyway, our feedback winner for September as Philip Fleming who fished The Parsonage and has a Fishing Breaks snood on the way. For everyone else it is back in the hat for the Abel reel at the end of October. Good luck! 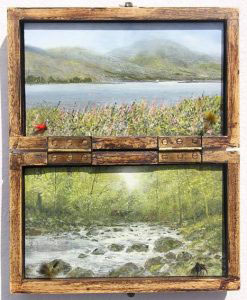 I always like it when someone comes up with a different take on artistry in the fly fishing arena and the current London exhibition by Garry Pereiraa hits exactly that spot.

Garry, a landscape artist, has come upon the novel idea of using old fly boxes as both the canvas and frame for his oils.  Explaining how this curious new source of inspiration came about he relates that last year he came across a massive collection of flies in an antique shop and subsequently “tracked down some old fly fishing boxes that I saw immediately as being a frame. Within the painted images inside I am trying to match the detail of the flies, and pick up on the colours.” 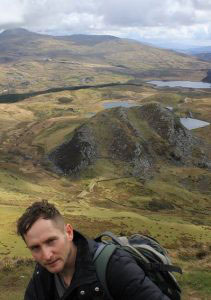 He says (pictured left on location) he endeavours to capture the spirit of the ‘earth around him’ in distant lonely places that fly anglers will know well and appreciate, from the Highlands of Scotland to Snowdonia. Norfolk remains his favourite county, for its vast skies, wide expanses of coastline, meadows, woodlands, and crashing waves. 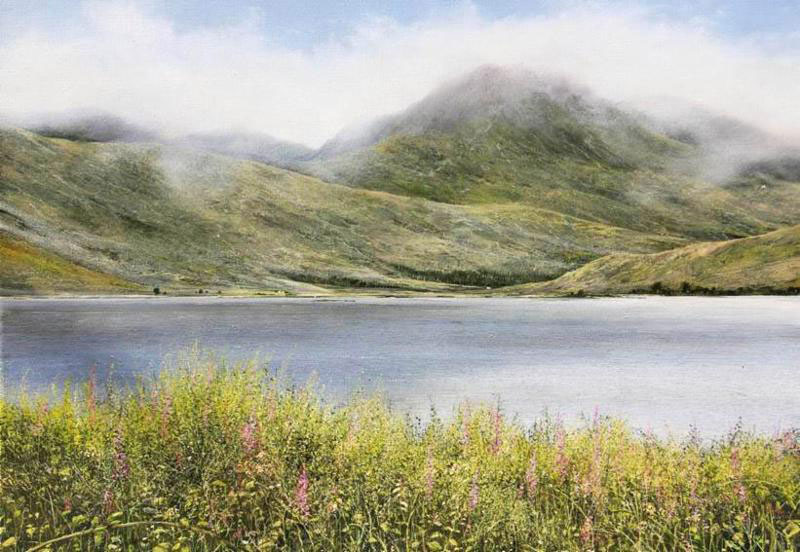 For the Darning of Father McKenzie 100x80cm Oil on Canvas 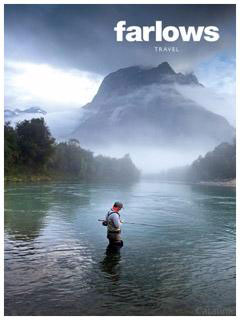 Earlier in the week I dropped in to see my old friend at Farlows Travel Roddy Hall in his Pall Mall lair. There was a serious reason for the meeting as we will be sharing a stand at the London Fly Fishing Fair in the spring: dates for your diary March 23rd/24th.

However, we both clearly had too much time on our hands as the conversation turned into a bit of a bragging contest as to who had been fishing where in the past twelve months. Now the truth is I was on a bit of a hiding to nothing especially when Roddy announced, in that laconic way that is very much him, that he was particularly proud of his year as he has caught an Atlantic salmon in three countries: Iceland, Russia and the UK.

Which got us to thinking: is there anyone out there who has performed a similar feat in four, five or more countries in the past twelve months?

Since we are talking about Atlantic salmon three questions on Salmo salar this week.

1)      How many species of Atlantic and Pacific salmon are there in total?

3)    Of the different species which a) lives longest b) grows largest?

It is just for fun, with the answers at the bottom of the page.