I am often asked whether poaching is a big problem for us and the truth is no. Occasionally we will get a bunch of kids dangling over a bridge but trout are mostly a wary bunch who soon outwit them. So, on the rivers do we have any problems of the human kind? Well, of course.  I must admit what used to enrage me most was wanton vandalism; breaking down fences, the smashing of cabin windows and low level stuff. But today it is litter that really is the bane of my life.

I exaggerate not when I tell you that each and every one of the river keepers I know will have spent some time in the past month on litter patrol in the run up to the opening day. However, for them it is not just a stick, bin bag and rummage along the verges but the donning of waders that has to do the job. It really never ceases to amaze me the amount of rubbish people discard into rivers. It is hard to conceive why anyone would lob a beer can into a pristine stream, but they do and in quantities you would find hard to believe. 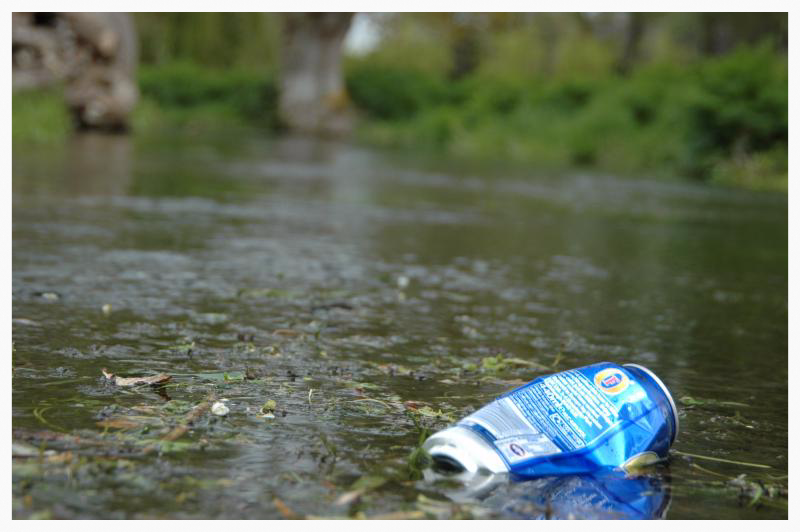 And there is a definite pecking order for the metal. Beer cans are in a clear majority, energy drinks second, closely followed by soft drinks. Sandwich packages, crisp bags and sweet wrappers are the litter stuff, plus loads of assorted items you really do not want me to list. Depressingly there is also a pattern to where we find most of this. Inevitably it will be downstream of urban conurbations; typically the hundred yards of a river below a road bridge or foot bridge on the edge of a town that will require a weekly clean up. The further you get away from people the less the problem …..

You may wonder what has prompted this rant. Well, three things really. Firstly, it has been much on my mind as we have dedicated so much time to the clearing up during April. Secondly, when we are trying so hard to improve the big stuff like water quality and habitat the litter thing really makes you despair as to why as a nation we can’t be good about the small stuff. And finally the campaign launched by Country Life  at least told me I wasn’t alone in being appalled at the quantity of littler desecrating our beautiful countryside. It doesn’t make for uplifting reading (e.g. 2.25m items of litter discarded every day) but the article and subsequent support it has garnered is worth reading. Here is the link

A new venue, new beats and more teams that ever before gave the 2015 competition that little bit of edge as the anglers and guides, new and old gathered at The Greyhound in Stockbridge. There were a few glances to the heavens, recalling last year when it rained relentlessly from dawn to dusk. But with good cloud cover, a light breeze and just a very slight chill to the air after an over warm week this looked a perfect fishing day. So it proved.

By lunchtime the scores were stacking up; the fish total had already surpassed the 2014 full day tally. Six teams were vying for first place, with scores of a thousand points plus, a total usually considered good for a whole day. As the teams returned at the end of the day there was no real inkling as to who had won as so many different beats had produced so many good scores. In the final analysis the top five places were taken by five different beats covering four different rivers with 184 fish between them. That compares with 154 fish for the entire competition last year, which gives you some indication of just how good the fishing and fishers were this year. The total on the day was 409 fish, not including a chub to a dry fly at Broadlands!

Winning team: Stream Dreamers (top left). Duffers Delight: The Dream Team (top middle). Alex Lewis & Big Fish winners (top right)
When the results were in the winner was Stream Dreamers led by John Graham a richly deserved reward as they have taken part in every One Fly since its inception. The winning angler was Marcus Janssen competing for the first time with a long time One Fly guide Brian Raw, who caught 48 fish on a Pheasant Tail/Hares Ear combo nymph, similar to the fly that won in 2010. The Estate prize went to Compton Chamberlayne who had been knocking on the door for the past two years with Benham Estate and Avon Springs picking up the section awards. The Big Fish prize with a 24″ fish apiece was shared by Jan Grimstone and Alistair Robjent.
If anyone felt a little bit nervous going into the One Fly that was as nothing compared to the 14  who put their vices on the line for the first ever UK Iron Man Fly Tying Challenge. This has its origins in Fly Tackle Dealer Show in the USA and takes a little bit of drama from the American version of Masterchef. This is how it works: the competition challenges all-comers to create the perfect fly within 15 minutes, but with a twist. The contestants are given no prior knowledge of the fly-tying materials. At the sound of the bell each is give 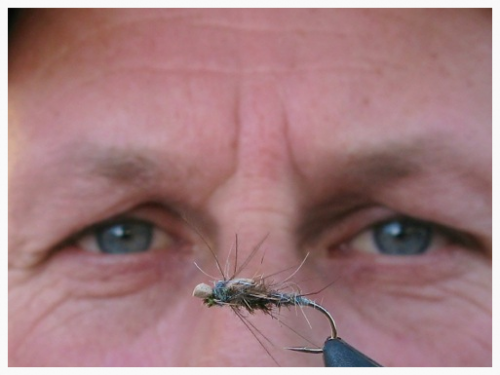 n an identical bag of fur, feathers, dubbing, flashy materials and hooks. What and how they tie is up to them, the outcome only limited by their skill, imagination and the ticking down of the clock. Just to spice up the challenge even more, a mystery material is given to each contestant half way through the first round. This must be included somewhere in the finished fly!  When time is up luminaries from the fly tying industry judge the flies, eliminating all but three of the contestants who go forward to compete in a winner-takes-all tie-off the same evening.

Fly tying is a skilled art that requires a steady hand; all credit to the competitors who, despite some shaking hands, all managed to complete a fly in the allotted time. Two One Fly guides. Rob Doyle and Stuart Tanner made it through to the final round along with keen local tyer Simon Ware with Stuart (pictured) winning out in the end.

A huge thank to Orvis for conceiving this event and also to The Greyhound on the Test for hosting the One Fly, all the rivers owners for providing the fishing and I am pleased to say the events raised £750 for our chosen charity the Alex Lewis Trust.  If you would like to see more photos here is our link to Flickr. 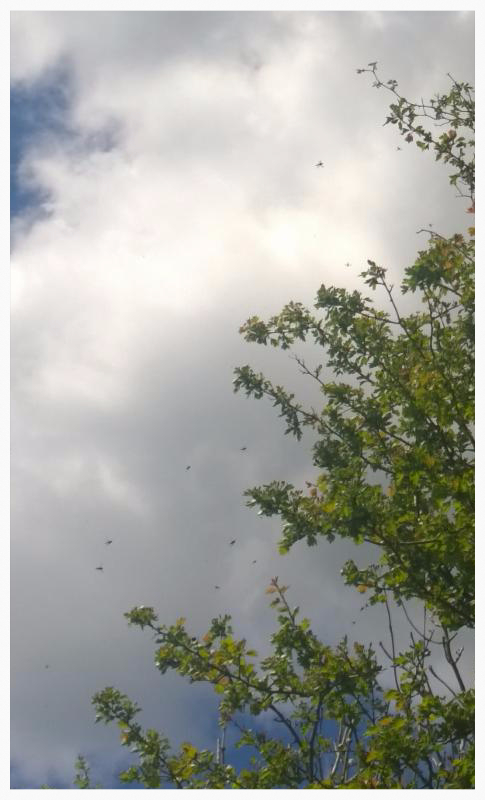 On Tuesday I took a walk along the River Test at Middleton and bumped into Jeff Smith. For those of you who might have fished there any time in the past 40 or so years, Jeff will be familiar. A coal miner who came south, he learnt his trade under the fearsome Countess of Brecknock at Wherwell before moving 4 miles upstream to Longparish.

Jeff, at least to my southern ear, sounds as Yorkshire as the day he arrived and he likes to play up the gruff northerner gig, but really he is nothing of the sort. Since he retired five years ago he still takes an active interest in the river, helping out Andy Clay the current keeper during the weed cut and generally lending a hand. Walking along the river we were both bewailing the lack of Hawthorn fly in the past few seasons. It is not really a river fly at all, the eggs laid in the damp earth beneath hedges. It looks like a house fly with an undercarriage, the long droopy legs hanging beneath as it flies. But it is not a strong flyer and once grabbed by a gust of wind it succumbs to its fate, which often ends it up dumped on the river where the trout go mad for this occasional feast.

As Jeff and I chewed the cud we turned the corner along into the meadows to be greeted by a huge cluster of hawthorn flies, dancing as they do around the hawthorn bushes that make up a majority of the hedges around these parts. It is good to be wrong sometimes.

Meadow flower of the month

The cuckoo flower Cardamine pratensis is the first and most visible of all the flowers in the water meadows (pratensis is Latin for meadow) in late April, poking its head well above the grass.
It is often called lady’s smock but I guess it gets its bird name as it appears around the same time of the first cuckoo call. The delicate pastel mauve-to-white petals always sparkle on damp mornings, little shining beacons dotted across the grassland. If you pick a few be careful; in folklore it is said to be sacred to the fairies, and so was unlucky if brought indoors. It was not included in May Day garlands for the same reason. 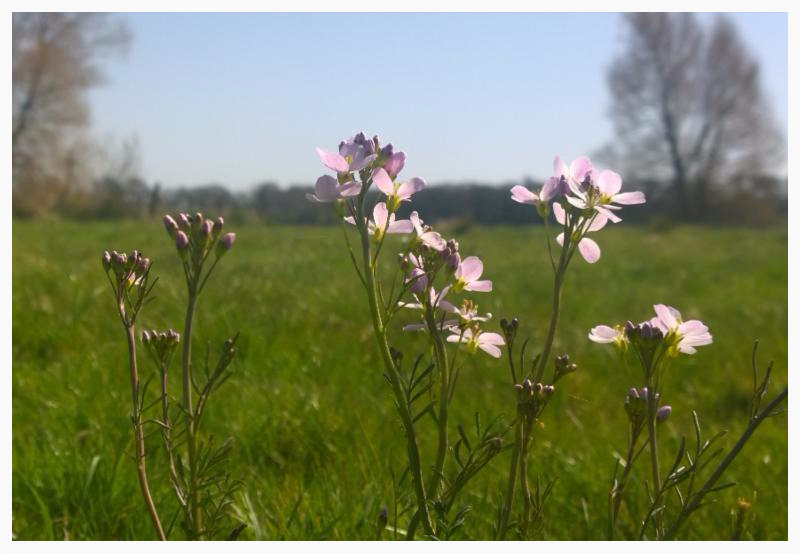 Back by popular demand is the quiz. Remember it is just for fun and the answers are at the bottom of the page.

1) How many fins does a trout have, including the tail?

2) Which fish is generally regarded as the biggest salmonid?

3) Which country is hosting the 35th World Fly Fishing Championships this year?

Have a good holiday weekend.