Gavin Gardiner Limited was established in 2006 to take over the running of Sotheby’s London based auctions of Fine Modern and Vintage Sporting Guns.

Already a leader in this competitive and diverse sector, Gavin Gardiner’s involvement with the London Gun trade and the International Sporting Gun Auctions can be traced back twenty five years.

Having had a hand in the sale of some of the most exciting sporting guns to come to the market in the last twenty years, his career highlights have been numerous and include: guns built for Royalty (Edward VIII and Lord Mountbatten), and guns built for the most famous sportsmen of the day (Lord Ripon, Prince Victor Duleep Singh and Harry Stonor to name but three), Important Statesmen and Prime Ministers (Winston Churchill, and Lord Douglas Home). 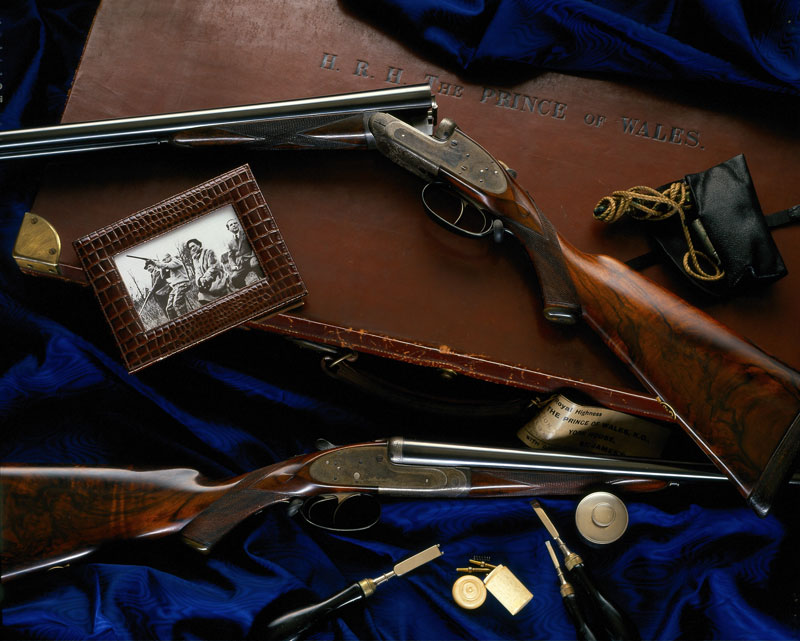 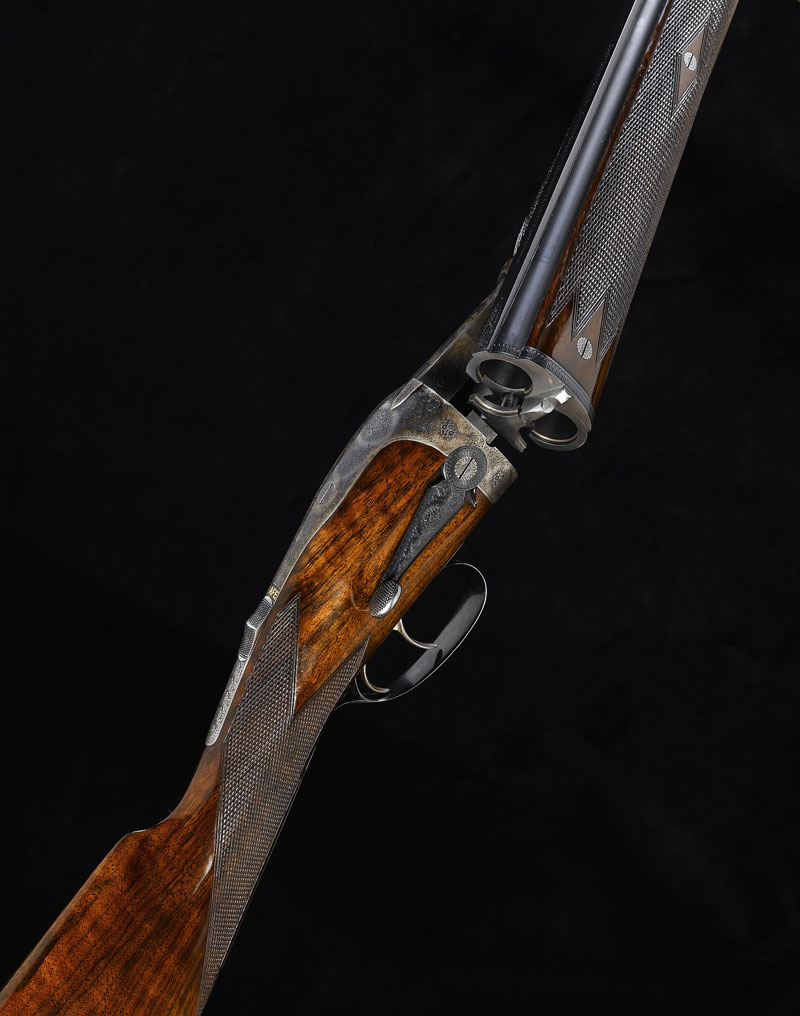 Most recently he has been responsible for the sale of the rare and almost unique John Dickson & Son round-action, side-opening over and under gun, based on the already successful round action. (see above)

This gun is effectively a side by side that has been turned on its side.  Opened with a side lever, and truly side opening, it has many unique qualities, superb handling again being at the fore.

The action is the shallowest of any over and under gun, being the exact depth/width of the barrels at the breech.  The gun sits very low between the hand and points in a very natural way.  It is perhaps the best handling of all ‘over and unders’ and despite its unconventional action remains a joy to use.

It is thought that as few as 4 examples of this design were built, the example presented at the Gleneagles Hotel in August 2006 was the last built, and remained in an exceptionally good and original condition.  It sold for a World Record price of £79,000.

Gavin Gardiner Ltd. offer a wide range of Fine Modern and Vintage Sporting Guns, Rifles and shooting accessories and, in association with Sotheby’s, offers items by the best British and European makers.

These range from the earliest breech loading hammer guns dating from the 1860s to the finest hammerless game guns of the Edwardian era through to the present day.

Gavin Gardiner also specialise in Shooting accessories such as gunmaking tools, place finders, cases and cartridge magazines which are always popular with collectors.   With items for the sportsman and collector alike, they offer everything for the shooting field.

Guns from the famous London makers including James Purdey & Sons, Holland and Holland, Boss & Co. as well as the best of the provincial makers are all represented in their two London sales held each year at Sotheby’s West London salerooms, and Sotheby’s renowned annual auction at the Gleneagles Hotel in Perthshire, Scotland.

This sale traditionally takes place every August, when all the keenest shots are in Scotland for the beginning of the Grouse season, and Gavin Gardiner Limited is therefore able to place clients’ guns in the most suitable sale and achieve the highest prices at auction.

They offer free and confidential advice on all aspects of buying and selling Sporting guns and their knowledge of the market and contacts within the gun trade place them in a unique position.

Numerous record prices have been achieved by Gavin Gardiner over the years, and highlights have included a World Record price of £80,450 achieved for a 12-bore over and under sidelock ejector gun by Boss & Co. and £79,250 for a  magnificent pair of Exhibition quality Keith Thomas engraved 28-bore sidelock ejector guns by Watson Bros. 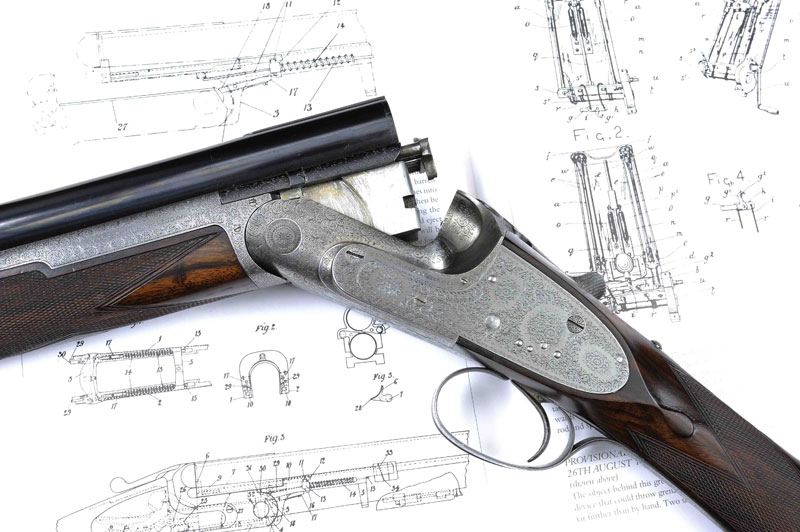 The very first Boss Over and Under built, perhaps the most influential shotgun design of the 20th century.

With the only fully illustrated auction catalogue in the business, as well as a fully searchable online catalogue, Gavin Gardiner is able to reach buyers worldwide and offer a personal level of service that is second to none.

With over twenty years experience with Sotheby’s, Gavin Gardiner is delighted to have the opportunity to continue his association with the World’s Leading Auction House while developing his position within the Worldwide market for fine Sporting Guns and Rifles. 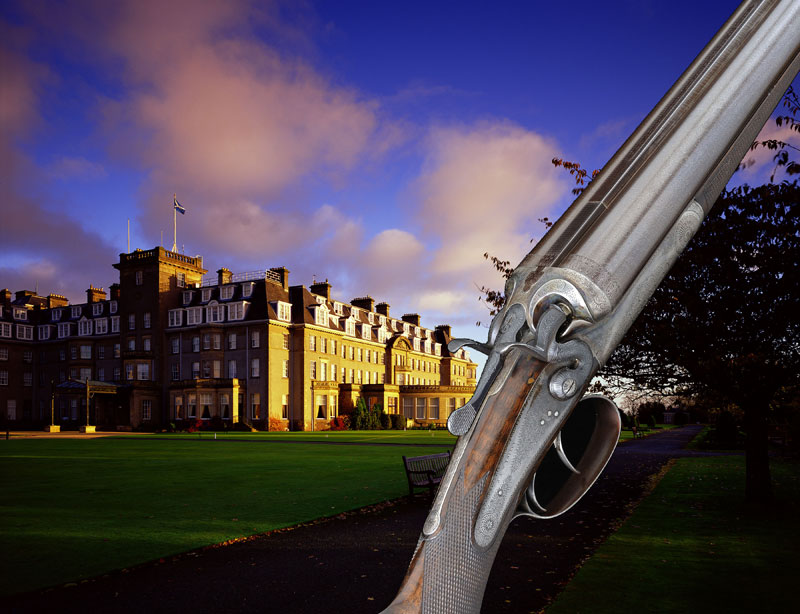 With over 240 lots this was the largest auction of Fine Sporting Guns at The Gleneagles Hotel for some years.  These sales are held traditionally during the first two weeks of the Grouse shooting season at this famous Scottish venue, and the sale is now in its 45th year and attracted bidders and buyers from all over the World.

Highlights this year included a very rare .22 rifle built by E.J. Churchill for the Marchioness of Londonderry, which sold for over double its estimate, at £21,000 to a private European buyer, and another rare rifle, this time by W.W. Greener sold for £15,000, again more than double its pre-sale estimate. 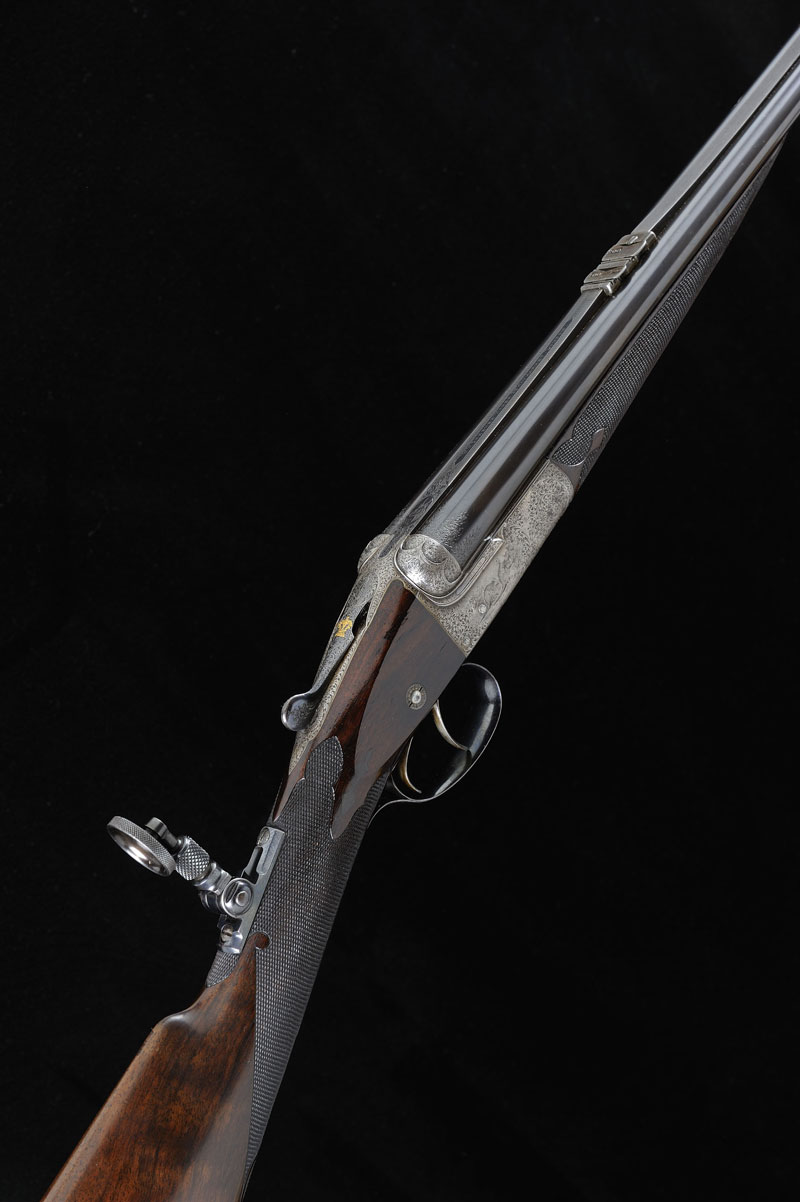 Lot  56:  W W Greener: A fine and rare “RFHT 60 Royal” grade .310 cadet boxlock ejector sporting rifle engraved with emu and kangaroos. The maker confirms that the rifle was built in 1912.

A Fine pair of best ‘Royal’ model sidelock ejector guns by Holland & Holland sold for £28,200, while a classic pair of Scottish round action guns by David McKay Brown sold for £24,000. 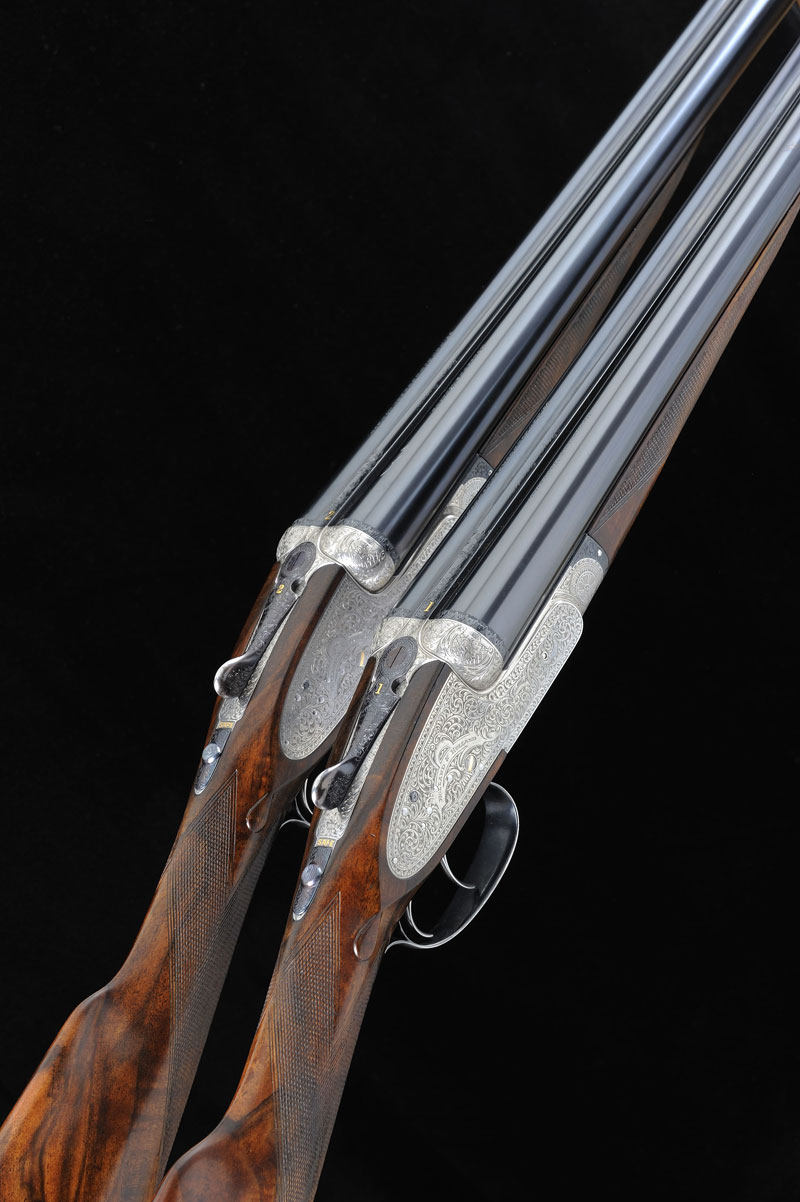 The maker confirms that the guns were built in 1935. 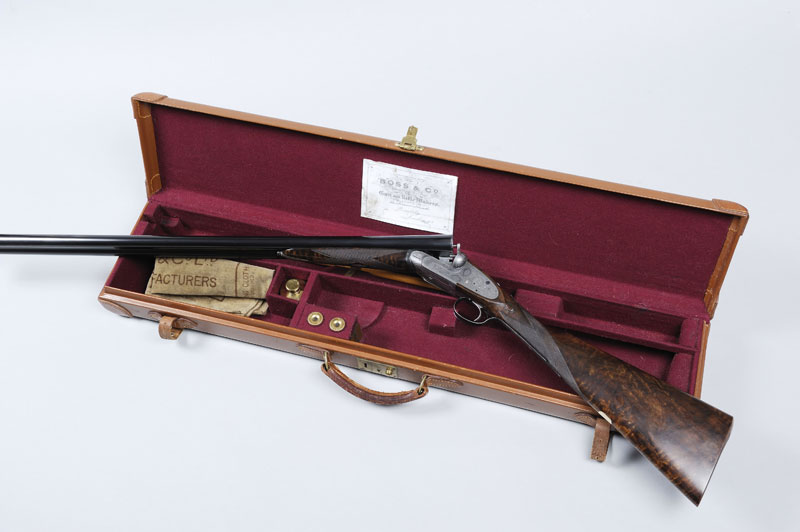 A rare 8-bore double barrelled gun by Tolley, built for Goose shooting sold for £12,000, and the same price was achieved for a Holland and Holland sidelock ejector that attracted much attention and was built for live pigeon shooting.

Speaking after the sale, Specialist Gavin Gardiner said, “In a difficult and highly selective market I was delighted by the level of interest that the sale attracted and the results achieved.   As ever, it was the rare and unusual that exceeded expectations and the strength of the collectors market, both at home and overseas, continues to impress.   After a difficult summer of cancelled Game Fairs and events this was especially encouraging and I look forward to my next auction in London at Sotheby’s in December” 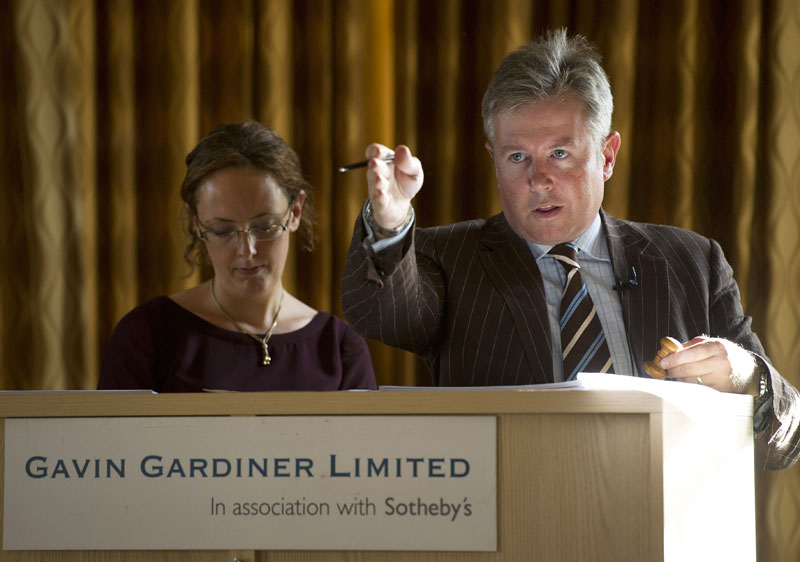