Gavin Gardiner Ltd’s first auction of 2014 of Fine Modern and Vintage Sporting Guns and Rifles comprises over 200 lots including a rare pair of 12-bore Hammer Ejector shotguns by London-maker James Purdey & Sons, that were built in 1895 for the Hon. Harry Stonor. Estimated to fetch £20,000-30,000, the guns will be part of the auction, which will take place on Wednesday April 16th 2014 at Sotheby’s, 34-35 New Bond Street, London. 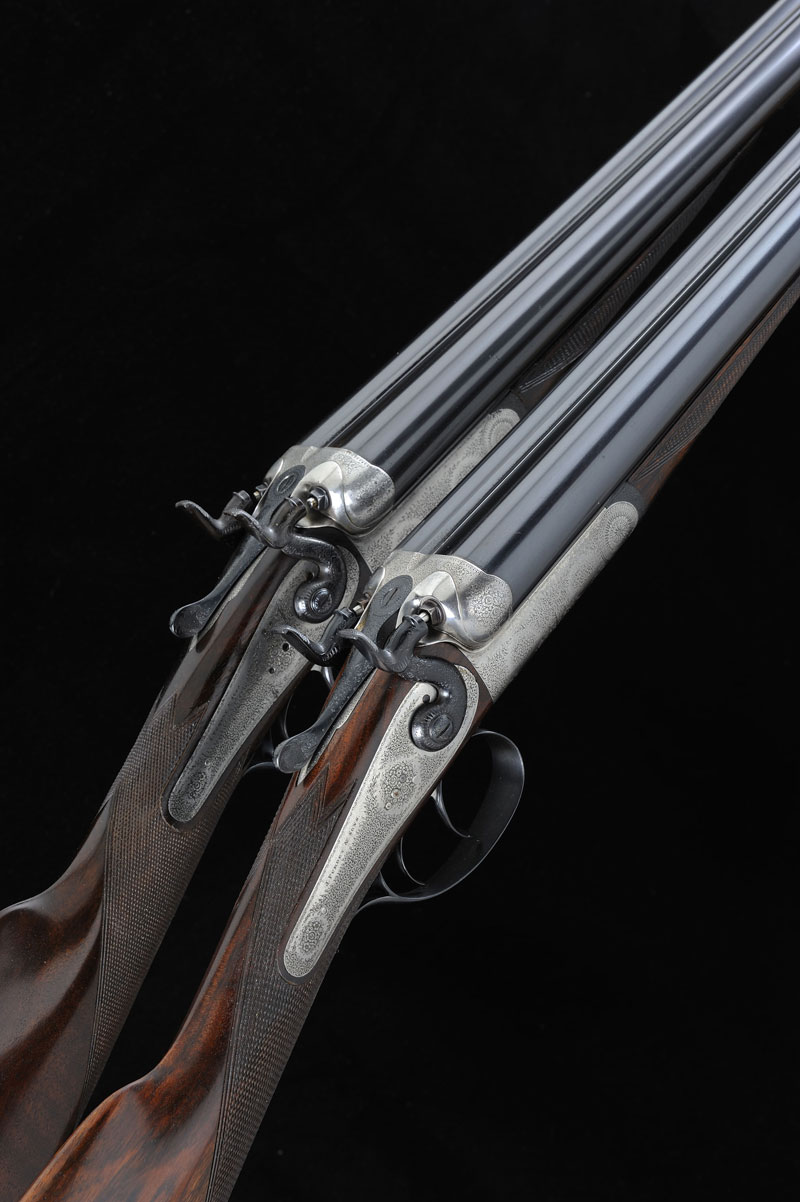 Sir Harry Stonor was a member of the exclusive Sandringham Set, and shot extensively with the finest gameshots of his day, notably King Edward VII, King George V, Lord Ripon and Lord Walsingham.  He was the Grandson of the 3rd Lord Camoys and spent much of his youth at Sandringham where he developed his capacity for shooting. He became Gentleman Usher to Queen Victoria in 1883, a position he continued to hold under King Edward VII and King George V.  He was deputy master of the King’s Household from 1918 until his retirement.  He was placed fourth in the 1903 Bailey’s Magazine list of the Twelve best shots in Great Britain, a list headed by The King, and Lords Ripon and Walsingham.

As Gavin Gardiner explains: “Hammer Ejector shotguns are rare, as ejector mechanisms were not available until after the hammer gun had effectively become obsolete.  It was essentially only the very finest shots of the day who continued to use hammer guns from Purdey in to the 20th century but fully appreciated the advantages that an ejector mechanism offered to allow for more rapid reloading.”

Elsewhere in the sale, which comprises a fine selection of sporting guns, rifles and shooting accessories will be pairs and single guns by all of the famous London makers as well as classic sporting rifles from Holland & Holland and J. Rigby & Co.

Gavin Gardiner is the only specialist firearms auctioneer holding his auctions in the heart of London’s West End, where he holds two sales each year as well as his prestigious sale at the Gleneagles Hotel, Scotland in August.  Gavin has over 20 years experience in this field. Coming from a traditional background, he was brought up with guns and shooting and has been involved with the Gun Trade from an early age.  He first worked for Sotheby’s in 1982 helping with weekend viewing of a Sporting Gun auction, while still at School.  From that moment he was hooked and has been involved in almost every Sotheby’s Sporting Gun auction since.  His passion became a full time job in 1987 when he joined Sotheby’s initially as a porter on a one day a week assignment to the Gun Department, this soon became five days and he never looked back.  He has been involved with many memorable auctions over the years, including Sotheby’s sales in New York and Geneva as well as the renowned Gleneagles auction that has remained the market leader in this sector for over twenty years.  He has also worked for one of the leading London Gunmakers which gives him a unique perspective in this field.  Returning to Head Sotheby’s Sporting Gun Department Worldwide in 2001 he doubled turnover in his first year, and has continued to develop and refine the auctions since.  He left Sotheby’s at the beginning of 2006 to establish his own company.