You see a great many corpses beside the road at this time of year as the animal hierarchy redistributes itself ahead of winter.

Badgers are so commonplace as to not raise comment. Deer something to steer around. Grey squirrels inexplicably more frequent that you might expect. But the saddest of all for me are hares, the white, jagged broken bones of those strong rear legs poking out of that beautiful golden brown fur. So, knowing how the population is in decline, it made me sadder still when I read this week that myxomatosis, the disease that wiped out 99% of the British rabbit population when deliberately introduced in 1952, may have crossed over into the previously immune brown hare population. 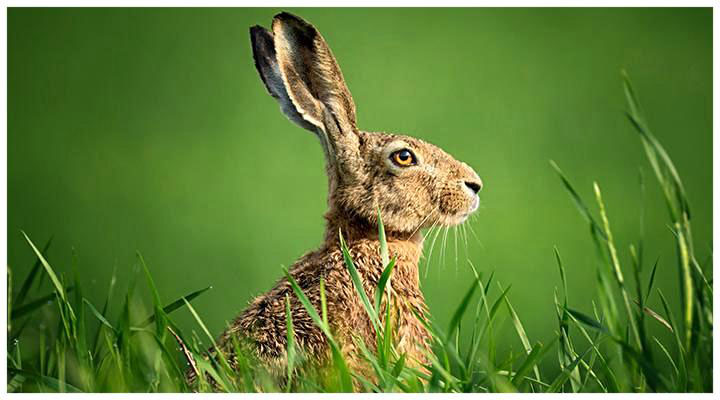 Hares have long been one of my favourite British animals. They are, a bit like otters, remarkably strong and large with a propensity to range far across large tracts of countryside doing their best to avoid people, conducting their lives out of the sight of humanity. For centuries they had made the empty downlands, where the greatest disturbance was a few sheep, their home. But in the post-war drive for more home food production, ploughs bit into land untouched by man since it was exposed by the retreating ice cover millions of year ago. The places they lived and the grassland they lived off has been disappearing ever since, the marginal habitat they are forced to inhabit polluted by agricultural chemicals.

Sound familiar? You’ll have read something similar to describe the plight of water voles, song birds and hedgehogs. In the case of hares it is estimated that the population has gone from something above 4 million a century ago to 800,000 today. The worry is that myxomatosis will all but wipe out the remaining hare population. However, as ever with these stories the headline may not tell the whole story: nobody is as yet certain that the unexplained deaths of hares in East Anglia are directly attributable to myxomatosis. In the 1930’s Australian scientists tried to deliberately infect brown hares with the myxoma virus but failed. There have been similar deaths in Spain but the evidence is inconclusive. In Ireland, where hares are relatively more populous but myxomatosis incidence is of a similar level to the UK, there have been no reported deaths.

Myxomatosis is spread by the rabbit flea that carries the virus, infecting the rabbits by biting as they hop from one host to the next; mortality once infected is close to a 100% as the rabbits go blind, lose fur to ulceration and the body organs shut down. As you might imagine in the close confines of a warren the fleas are easily transferred, so populations are rapidly wiped out. Hares however live a different life which suggests myxomatosis would not so easily take hold.

Brown hares prefer the solitary life, living in very exposed habitats so they may use their acute sight and hearing to avoid their primary predators – foxes and raptors – by running at up to 45mph, which is faster than a horse. Unlike rabbits hares live in the open, creating ‘forms’, small depressions in the ground among long grass. Here they spend their day moving out to feed in the open at night. Tender grass shoots, including cereal crops, are their main foods. Breeding takes place between February and September with the young, known as leverets, born fully furred with their eyes open who are then left by the mother in forms a few yards from their birth place. Once a day for the first four weeks of their lives, the leverets gather at sunset to be fed by the female, but otherwise they receive no parental care. This avoids attracting predators to the young at a stage when they are most vulnerable. They don’t live particularly long lives, 3 to 4 years is the norm, with disease and predation the two major causes of death.

This difference in lifestyle, and in the absence of any firm evidence, has suggested by some that the culprit may be rabbit haemorrhagic disease (RHD) which first emerged in China in the 1980’s. It has since spread around the globe first reaching Britain in 1992 when the domestic rabbit infected the wild population. But RHD is more virulent than myxomatosis wiping out 10m rabbits in 8 weeks when the virus escaped quarantine on the 20km2 Wardang Island off the south coast of Australia in 1995, spread as it is by contamination and the wind.

So for the moment, despite many assumptions, we don’t really know what is happening. The University of East Anglia, along with the Suffolk and Norfolk Wildlife Trusts are trying to gather dead hares for analysis but it is all certainly very odd. One report was of six dead hares in a single field; for a solitary mammal that would be quite a conclave. I suspect we have a while to go before we get to the bottom of this particular problem but even when we do it won’t change the truth: disease or no disease, we are gradually, just a little at a time, destroying the British countryside that we purport to love. 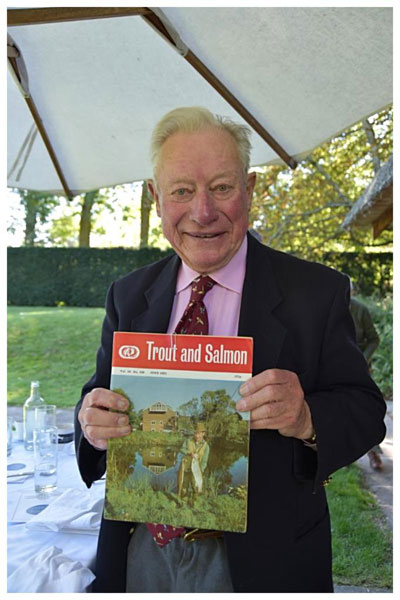 Two weeks ago I was so pleased to host a very special lunch at Nether Wallop to celebrate the 50th anniversary of fly fishing at The Mill.

The guests of honour were Renée Wilson, widow of Dermot Wilson, and their son Fergus. As Renée said to me they were initially hesitant at accepting my

invitation; neither had been to The Mill since 1982 and the thought of a return stirred up all kinds of memories. But as it turned out we all had the most wonderful time reminiscing about Dermot, the wonderful camaraderie of the customers and the whole madness of the venture he set his family on.

Charles Jardine, back then a perm-haired recently graduated art student, joined us as he had been the resident trainee guide/instructor under the guidance of the irascible Jim Hadrell. Barrie Welham, a long time friend of Dermot and Renée was there, producing a copy of the 1971 Trout & Salmon (cover price 17.5p!) which featured the British record rainbow trout that he had just captured from The Mill lake. Neil Patterson, he of Chalkstream Chronicle fame, read a letter that Dermot had written to him apologising, in the most charming of words, for inadvertently taking credit for a pattern Neil had invented. Richard Banbury showed us where his desk had been in the days when Orvis took over The Mill from Dermot and Renée.

We rounded the day off unveiling a blue plaque that I hope will remain for many decades as a fitting tribute to a great man. 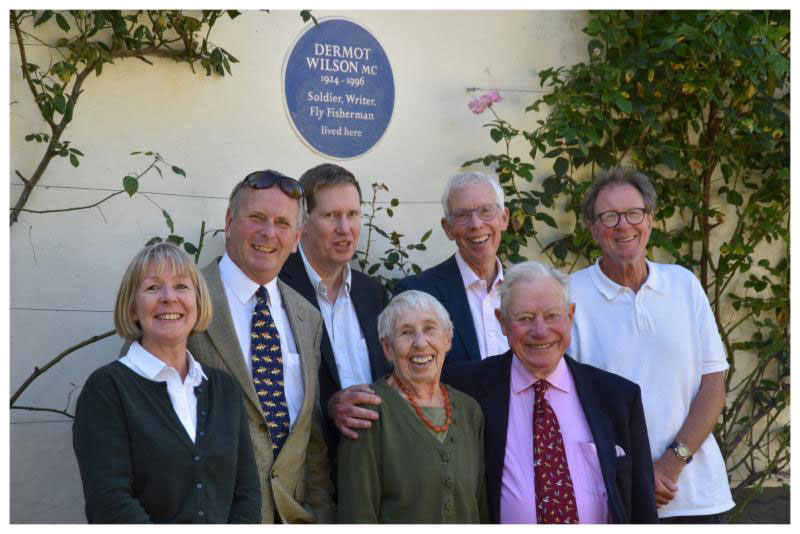 A troika of greats

I was very touched as Renée Wilson handed me a gift wrapped package by way of thanks for the day. As I undid the wrapping in her very understated way she said, ‘These are just a few bits and pieces from Dermot’s collection I thought you might like.‘ I was overwhelmed when she told me the provenance of each of the three items. 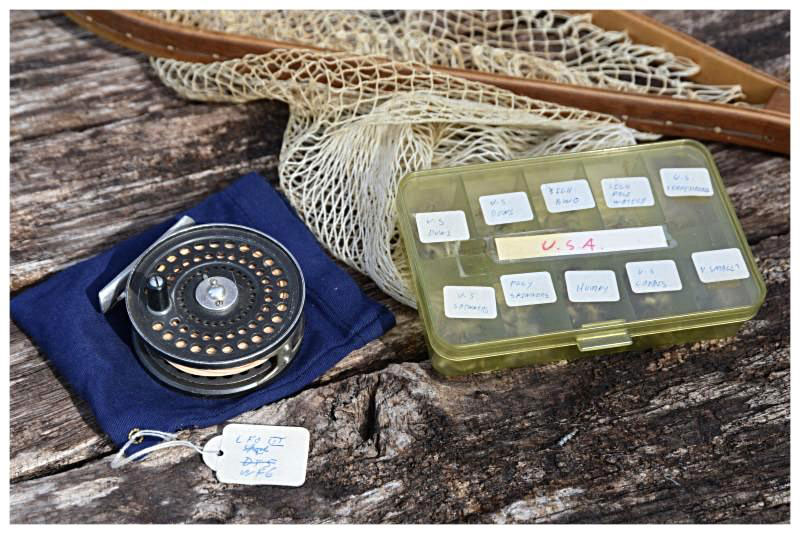 The first is one of Dermot’s very own reels. As the original UK Orvis dealer he was very loyal to the brand who, you might be surprised to hear, actually made all their high-end reels in the UK as late as the 1980’s.

Renée tells me Dermot was a bit obsessive, tagging everything, hence the label. The reel still has the leader from the last time he fished.

The net was a gift from the legendary Lee Wulff, he of Gray Wulff fame, who was a regular visitor to The Mill.

The final item is a fly box full of flies that were tied by Ernie Schwiebert an American angling literary colossus. He was a great friend of Dermot, the box a gift from him to Dermot when they fished together in Montana.

Schwiebert is not so well known in the UK but though I never met him I owe him a huge debt. He wrote a two volume master work on trout in which, as a schoolchild, he enraptured me about the chalkstreams. They were so much the weft and weave of my upbringing that it took an outsider to show me how very special they were.

The quality of his writing is without measure. Let me quote from a speech he gave in 2005, shortly before his death. It is the very definition of why we fish. 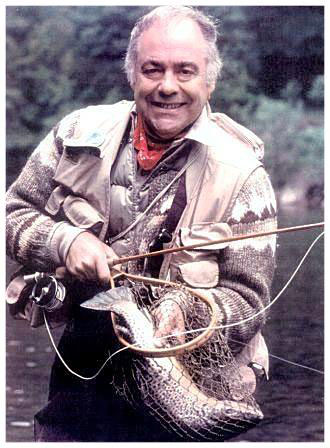 “People often ask why I fish, and after seventy-odd years, I am beginning to understand.

I fish because of Beauty.

And in our contentious time of partisan hubris, selfishness, and outright mendacity, Beauty itself may prove the most endangered thing of all.”

The usual random selection of questions to confirm or deny your personal brilliance. As ever it is just for fun with the answers at the bottom of the page.

3)    In what year did Queen Elizabeth II celebrate her 50th year on the throne?