How shooting clays led me to the perfect gun:-

Those people, like me, who are keen game shots, have learned to value clay shooting as a way to keep your eye in during the closed season, in the Spring and Summer, and even up to 1st October.

Consequently, quite a large following has grown for the many Simulated Game Shoots, which take place on sporting estates out of season, and enable the participants to shoot as many as a thousand cartridges in a day, especially if you have an efficient ‘stuffer’ or loader. This is a great way to practice for the game shooting season. Most simulated game shoots are comprised of eight pairs of guns, with one shooting and the other one ‘stuffing’, and then swapping over, halfway through each drive.

Earlier this year I arranged a simulated game shoot at the Foothill Estate in Wiltshire where some of the drives are in wonderful parkland designed by Capability Brown. This is one of the joys of these days, because you are standing on the same pegs they use for proper drives in the season so your surroundings are much prettier than being at clay shooting grounds. 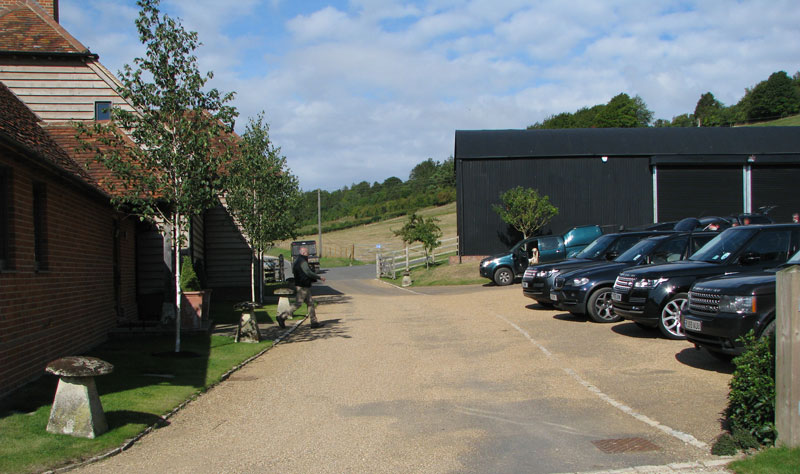 Range Rovers at The Ready

I attended two other Simulated Game Shoots last summer, both at Well Barn, a beautiful sporting estate on the Oxfordshire/ Buckinghamshire border, which belongs to Hugh Osmond, the pub entrepreneur, who turned Punch Taverns into a £3.5 billion business. He then acquired Pearl Insurance for £1.2 billion and sold it two years later for £2.3 billion. He now runs a private Equity group called Sun Partners with 5 other successful entrepreneurs, and can therefore afford to maintain the Well Barn Estate in immaculate condition, which he does admirably.

The Start of The Day at Well Barn

I was invited there as a guest of Martin Cawley, the Chairman of Devonshire Wealth Management, and my fellow guests were Howard Kruger, the Founder and CEO of Elm Street Media, and Chris Horne, the MD of Guns-on-Pegs which he co-founded with his father James.  Earlier this year James Horne was appointed Chairman of James Purdey & Sons, in their bicentennial year, a decision probably taken by South African billionaire, Antony Rupert, Chairman and a major shareholder in the Richemont Group which owns Purdey’s.

Back to the shoot – the day began with the shooting man’s breakfast of bacon or sausage in bread baps, washed down with coffee, sometimes laced with whisky from a discreetly concealed hip flask.

As an aside, and thinking of ‘hip flasks’, our host, Martin Cawley had recently been celebrating the arrival of his first son, Monty, and I had  met one of the godparents-to-be, who was lost as to what to give his Godson. So I told him what I had done for one of my godsons, which I had copied from Noel Coward, who, when attending the Christening of the young David Niven Junior, gave him a silver hip flask engraved with the memorable lines, “I’ve given you this, because I rather, Think you’ll turn out like your Father.”  I’m pleased to say he took my advice and I am sure the prediction will come true!

So, we set off for our Simulated Game Shoot at Well Barn, and enjoyed a variety of pheasant, partridge, and grouse stands, all ably organised by the Really Wild Clay Company, part of the Royal Berkshire Shooting Grounds.  It was not long before we started hitting the clays with regularity, but the better we got the harder they made them, which stretched everyone’s abilities!

It was a most challenging day and we shot several more stands, punctuated by stops for ‘refreshments’, which the ever generous Howard Kruger translated as an excuse to extricate his hip flak, and proffer Havana cigars from his humidor from the boot of his Range Rover.  Finally we returned to the Barn for a very good lunch at which the results of our labours were broken to us. 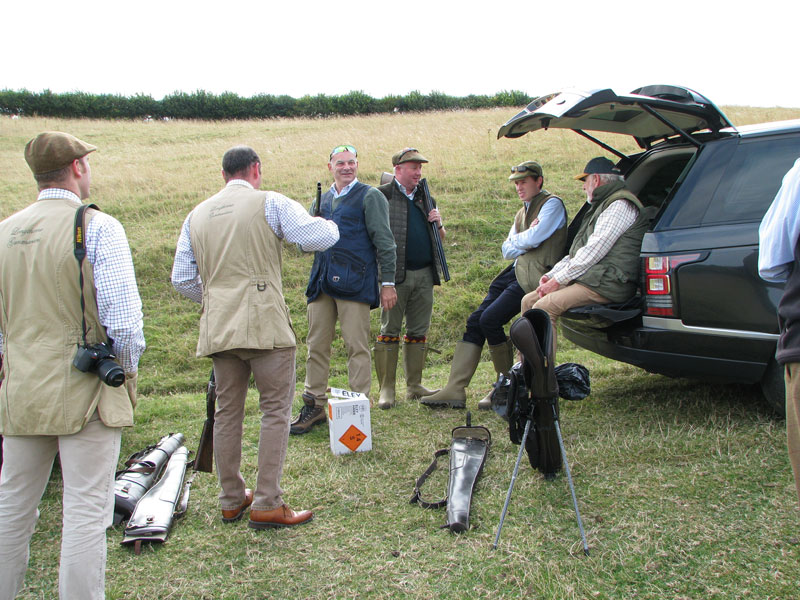 Relaxing Between Drives at Well Barn

I had been forced to borrow an over and under as my poor old box-lock side by side, cannot cope with 1000 cartridges through its thinning barrels in a day, as it gets far too hot to hold.  I did passably well with my over and under, but not being used to shooting with one, it did not feel natural, or entirely comfortable. So when I was invited again two months later, I asked James (Jim) Stewart the owner and maker of Longthorne Guns, and a Business Member of The Vintage Magazine, if he would be kind enough to allow me to test one of his beautifully made guns.

This proved to be a revelation – firstly, it is much lighter than any other over and under I have used in the past, and it has very little recoil.  In fact, I shot virtually every clay I aimed at, and I could not believe how well I shot with this gun, and my friends were as surprised as I was.

So when I received my latest invitation again from Martin Cawley to be part of his team competing in a clay competition sponsored by INVESCO, at the Holland & Holland Shooting Grounds at Northwood in north-west London, I leapt at the opportunity of using the Longthorne gun again, just to see if my previous performance had not been a freak result.

We set off for the stands for some practice, and then, after our mid-morning break, the competition began in earnest.  There were 9 teams of 5 guns in each team, so 45 competitors in all. 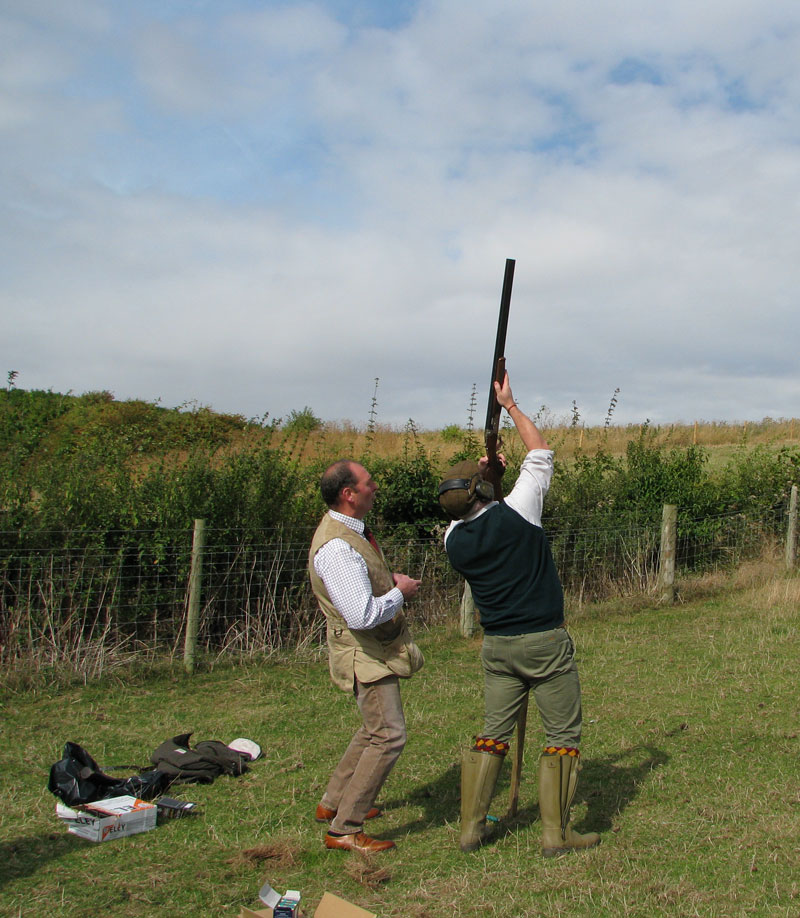 Sadly, I had to leave early to return an Aston Martin Vanquish which I had been testing that week. So I was pleased, and a little surprised, to discover afterwards via a text from Martin Cawley that not only had our team won the overall competition by a country mile, but that I had the second highest score, missing out by one clay!

I was naturally delighted, especially given that I am old enough to be the father of most of the competitors, but it gave me hope that there is life in the old dog yet.  Although I have to admit that it was in part largely due to that wonderful Longthorne gun which made me shoot so well.

Now, we are about to put the Longthorne gun to a final test of a driven game day at Goodwood in November, and if as I suspect it passes that test too, then I will just have to find a way to afford it, because it has revolutionised my life, and I cannot live without it.

Lest you think I was being ‘economical with the truth’, I have 44 fellow competitors, and a dozen Holland & Holland staff to vouch for me, and of course the designer and maker of these wonderful guns, James Longthorne Stewart.

Jim Stewart is an experienced engineer, who has developed, and patented a revolutionary technology to make the barrels of his guns out of a single piece metal, which makes them incredibly strong and light, with very little recoil.  ‘Genius’ should be his middle name, and I am not the only person who thinks so, because The Duchess of Rutland, and Lord Coke, the Heir to the Earl of Leicester, and the inheritor of Holkham Hall, have both bought matched pairs of Longthorne guns recently, and they do know what they are talking about. 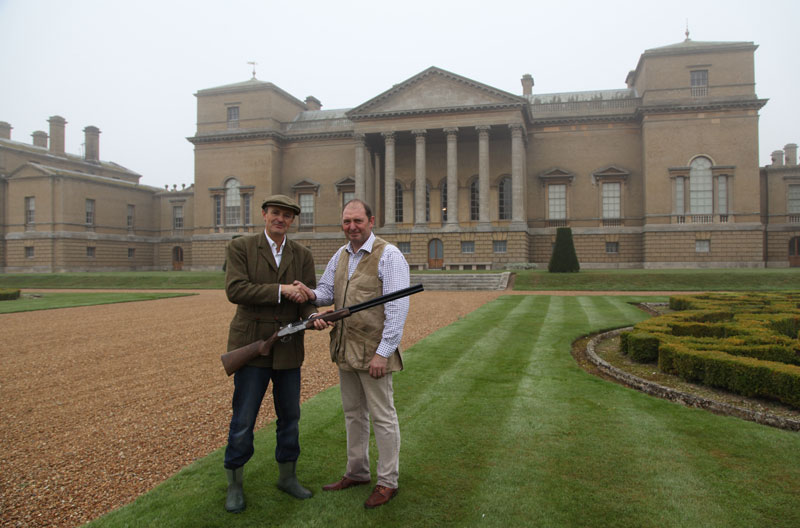 So don’t take it from me, but ask some of the best shots in the country, and they will support everything I have said about Longthorne guns, and James Stewart’s order book is further evidence of the superiority of these beautifully made and engraved  guns.

I have seen the future of English gun making, and it is called LONGTHORNE, so buy yours now or miss the boat!  They are destined to become the Purdey’s of the 21st Century.

Robert Jarman, The Editor and Founder of The Vintage Magazine, passionate Shot and now over and under convert, as long as it’s a Longthorne gun.