I was recently lucky enough to be invited to a Fly-Fishing day as a guest of Orvis, who have a wonderful beat on the River Test at Kimbridge.  So, on 1st October, the first day of the pheasant shooting season, I duly arrived at the appointed hour, to find a happy group of fellow guests and some very helpful staff from Orvis, whose primary concern was to give us an enjoyable day’s fishing on one of the best beats on the Test.

This beat marches with that belonging to Roger Waters of Pink Floyd, who is still performing his own works all over the world, and has an apartment in New York, as well as a wonderful house on the Test at Kimbridge –  two greater extremes of culture and climate would be hard to find!

JB of JLS fame being given instruction on the gentle art of fly-fishing by Olly Newbury, the Store Manager at Orvis Stockbridge

Representing the younger music scene was the disarmingly charming J.B from the hugely successful ‘Boy Band’ JLS, so I immediately thought how impressed my grand-children would be to know that I was fishing with a member of JLS – so here is the photo to prove it! 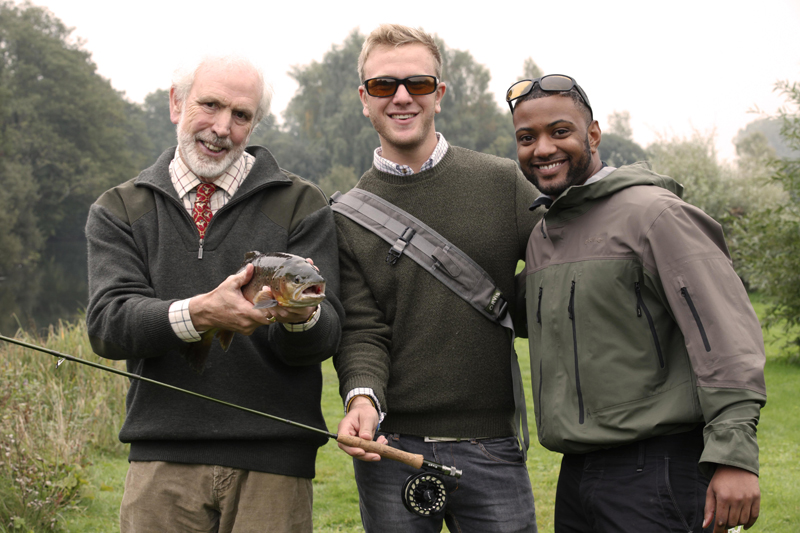 The other guests were from various magazines, including  Kate Green from Country Life, Lisa Sykes from Good Housekeeping, and Simple Things magazine, a recently launched Hearst magazine aimed at the urban dweller with a fondness for all country things, whilst not necessarily wanting to live there, which is a bigger market than you might imagine!  The only journalist missing was Hugh Grant from Horse & Hound! 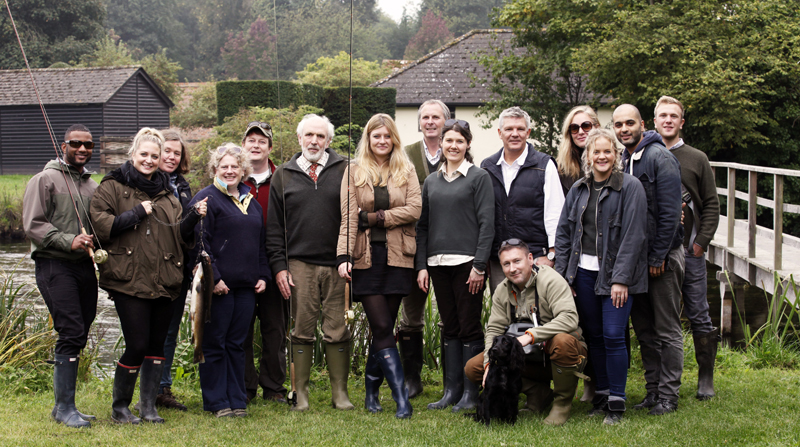 After a cup of coffee and a bacon sandwich, we were paired-off with our ghillies/ instructors.  We walked the few hundred yards to the end of the beat and started working back slowly, trying to cover the water efficiently, although a few disagreements with the surrounding trees and bushes reminded me what a poor fisherman I really am!

Fortunately, help was on hand, and I moved away from all such ‘heffalump’  traps and soon began casting reasonably well, under the guidance of Myles Levy the charming ghillie supplied by Orvis, who soon reminded me how to cast properly and how to ‘read’ the water.

Anyway, after about an hour of thrashing the water and with more than a little bit of help from my friend, I finally caught a reasonably sized rainbow trout, which, measured on the Jarman scale, was enough to provide a meal for two!

However, ten minutes later I got into a much bigger fish altogether, and after about 10 minutes of playing it, landed a large brown trout with the assistance of Myles.  This one weighed in at a very respectable 4 lbs,  which comfortably fed four of us a week later with left-overs for fishcakes.

By this stage, I was feeling ready for lunch, due to all that fresh air, so was thankful when we all retired to the Fishing Hut where the goodies brought for us which by Clare Zambuni were readily consumed.  Claire is the High Priestess of ladies shooting, and one of eight ladies included in the Field Magazine’s Top 75 shots for 2012, which is no mean feat!

I was looking forward to meeting Claire for a number of reasons, including the fact that I was in the final stages of writing a major feature for The Vintage Magazine about the increasing number of ladies who are taking up game shooting in the UK and wanted to get her comments on it before it was published.

So, Claire and I talked about shooting whilst fishing, and she promised to read my draft, and let me have any  comments, which she kindly did, and I also quote her website in my article which will be published later this month.

Sadly, I had to leave after lunch, but I did not leave empty handed; I was allowed to take my two fish, and a selection of goodies from ORVIS, whose fantastic staff made the day so enjoyable.  I hope to see all of them again soon, either in Stockbridge, or at their new flagship store when in opens next month in Regent Street.

There is no doubt that Orvis have one of the largest selections of Fishing rods & reels and everything you could want for fly fishing, and one of the best ranges of men’s and women’s outdoor  clothing and accessories in the UK , and I cannot wait to see their Regent Street store.

By Robert Jarman, Editor and Founder of The Vintage Magazine and provider of fish for his family!