The 7th February 2014 will see the opening of the 22nd Winter Olympic Games, which will be held in and around the resort of Sochi in Western Russia.   They will be the largest and most expensive winter games ever, with a record 98 events in 15 winter sports disciplines.  New to the Olympic programme will be Parallel Slalom for snowboarders and something called Slopestyle, a development of freestyle, in which young people on skis or snowboards hurl themselves off artificial ramps and perform various gymnastic contortions in mid air, with marks awarded by judges.

Very spectacular, no doubt; but to many people the top events, the ones which epitomise the Winter Games, will be the classic Alpine Ski races, the Downhill and the Slalom.  The winners of these blue ribband events will come from the alpine countries of Western or Eastern Europe, or from Scandinavia or North America; they are most unlikely to come from Great Britain.  Sport England, the quango which distributes Government grants (i.e. taxpayers’ money) to promising elite athletes’ medal prospects, has so little confidence that it ceased support for Alpine skiing after the disappointments of Vancouver four years ago.  One can see their point.  We have had some near misses, including a close 4th place and a wonderful 3rd place disqualified for an accidental and irrelevant rule infringement, but it remains the case that no British Ski racer has ever won a medal at the Olympics and that our last skiing World Champion was at Innsbruck in 1936, when Evelyn Pinching won the ladies downhill and combined titles. 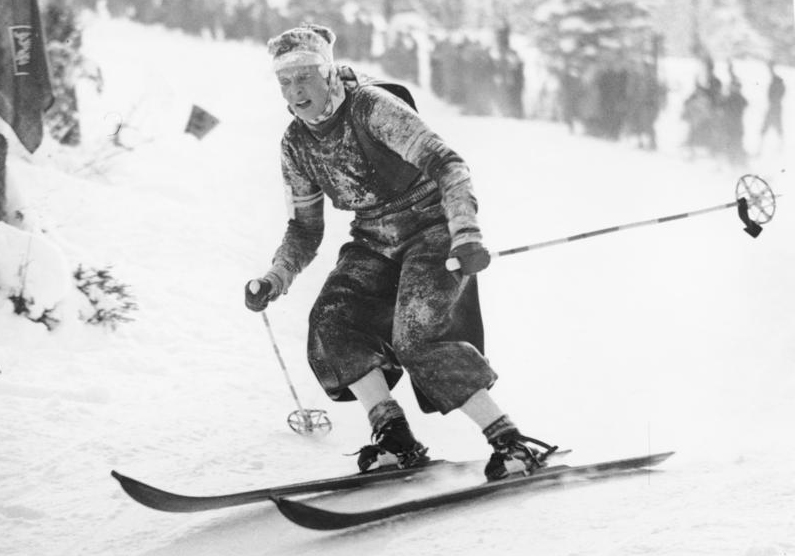 This is of course no surprise and no disgrace.  Long periods without major success are all too common in sport, even in sports in which we are major participants.  Think how long we went without a British mens singles champion at Wimbledon; the first bicycle road race in France, Paris to Rouen in 1868, was won by a young Englishman, but British success in the Tour de France didn’t come till 2012; as England’s footballers struggled even to qualify for entry to the 2014 World Cup a newspaper pointed out that except in the victorious year of 1966 when we played on home ground, no English team has ever beaten any of the worlds top footballing countries in the knockout stages of any World Cup, and in sailing, fifteen British yachts were beaten by the sole foreign entry in a race round the Isle of Wight in 1851; the winning Schooner was called America and all British efforts ever since to win back ‘her’ cup have been unsuccessful.

These last sports are all ones in which the British were among the pioneers and to which our early contributions are fairly well known.  Less well known, perhaps, is how much the glamour skiing events of the Winter Olympics also owe to British pioneers – for it was the British who invented the modern slalom, who wrote the first rules for downhill racing and who organised the first World Championship in these events, after a long struggle to persuade the Scandinavian-dominated International Ski Federation to take them seriously.

As so often in history, change and innovation were created by outstanding individuals – in this case two Englishmen called Lunn, Henry Lunn (later Sir Henry 1859-1939) and his son Arnold Lunn (later Sir Arnold) 1888-1974.

Henry Lunn, an energetic and versatile Victorian entrepreneur, had been a medical missionary, an agent for sporting equipment and a conference organiser before setting up a travel company which took British people on winter holidays in the Alps and entertained them whilst there with ski races and other diversions.  He never skied himself, but in 1898 he took his 10 year old son to Chamonix and gave him a pair of skis.  The lad never looked back.  Arnold Lunn became an enthusiast for ski touring later making several pioneering traverses and climbs and founding clubs to further the sport.  He won his first ski race in 1904, a primitive cross country event for schoolboys in one of his father’s Swiss holiday groups.  They went round a loop, starting and finishing in the same place.  Arnold Lunn reckoned that there must be better ways of ski racing and became the leading advocate of alternatives and a major figure in the skiing world. 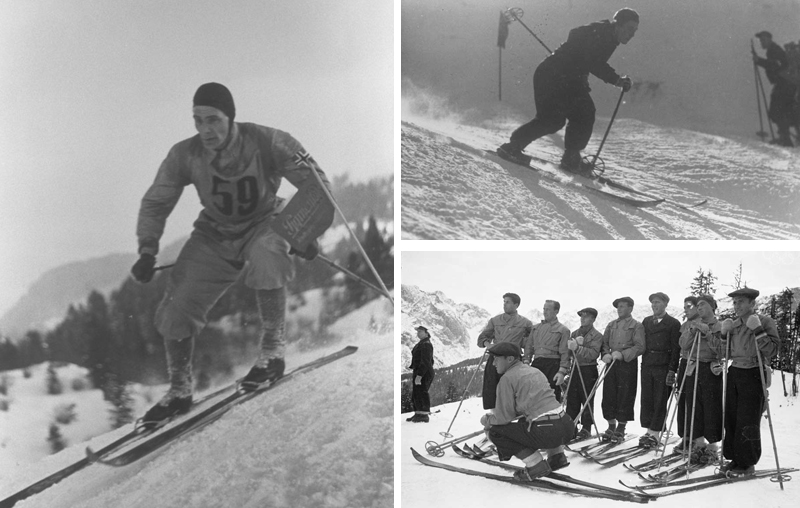 In the early years of the last century, ski competitions were either the Nordic disciplines of cross country (langlauf) and ski jumping, both dominated by the Scandinavians who had developed them, or were style competitions, in which entrants were required to do specified types of turns at marked points down a hillside, observed by judges who awarded then points – in a similar manner to the earlier winter sport of ice-skating.

Then in 1921 for the first time one country introduced a change and decided its national ski championship partly on the results of a race downhill.  Fifteen competitors set off from a mass start on the Lauberhorn above Wengen in Switzerland and raced down past Kleine Schidegg to a finish above Grindlewald.  Their results counted for half the points towards their national championships, the other half coming from a style competition.  The country concerned was Great Britain and the initiative came from Arnold Lunn, by then a leading figure in the sport.

The remainder of this article content is viewable to The Vintage Magazine Subscribers only...

Subscribe today as a Vintage Member and enjoy hundreds of exclusive articles from some of the country's most interesting authors, and take advantage of exclusive subscriber offers and promotions, completely free of charge.

Business Membership offers unlimited access to content and a listing in our Business Directory alongside world-famous brands, from just £250 per year. Join the Vintage Revolution today!
Click here to learn more and become a member!