The approach to Amberley Castle is by way of a long gravel drive, flanked by lakes and stylishly designed gardens with immaculate lawns leading to the impressive twin towered gatehouse with its fully functioning portcullis, closed at night to protect those within the castle walls.  Passing beneath the portcullis one discovers the Manor House and the magical gardens that hide behind the 60 feet high castle walls and the sense of history and heritage is evident. 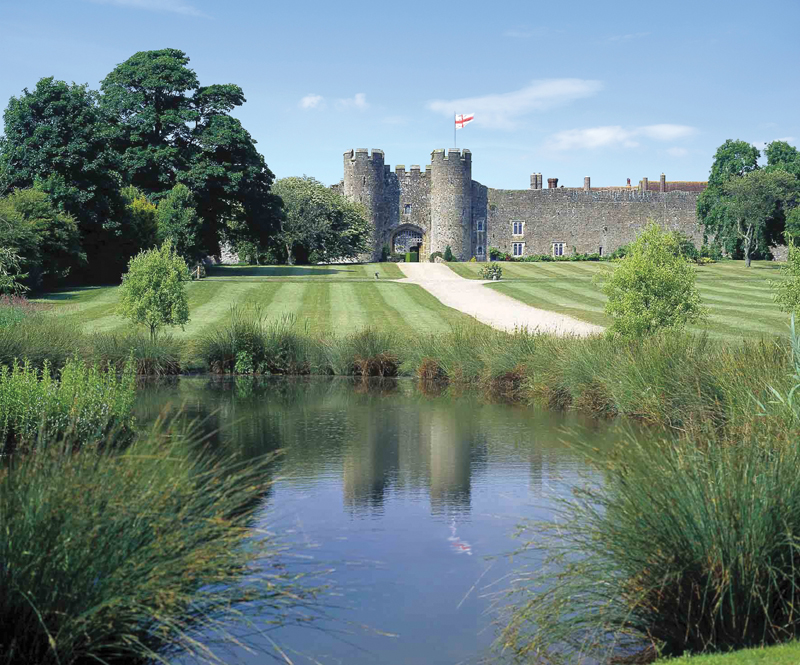 However, in spite of the obvious splendid of ones surroundings the  immediate impression is that one has arrived at a private dwelling, albeit a very grand one,  for an intimate evening with friends rather than an hotel.  There is no obvious ‘hotel’ entrance but a pathway lined with lavender and geraniums leading to a discreet medieval doorway through which one is directed to the reception desk.

Of course there is the usual efficient, ‘nothing is too much trouble’ attention from the staff and one’s car is whisked away from the inner courtyard to be parked in a concealed area away from the entrance so that there is no evidence of modern day cars to spoil the impact on first seeing the Castle in its full romantic glory.

Amberley Castle was originally built in 1103 as the Bishop of Chichester’s hunting lodge that later became his Summer Palace.  It first became a luxury hotel in 1989 and was welcomed into the Relais & Châteaux consortia in 2004.  Amberley Castle was purchased by the Brownsword Group of hotels in 2011, led by Andrew and Christine Brownsword, who acquired several of their properties following the demise of the Von Essen Hotels.

The castle is a Grade 1 listed building with the 14th century curtain walls being listed as an ancient national monument.  The castle sits resplendently in 12 acres of mature gardens, featuring lakes, medieval stonework with rose clad arches, statuary, gazebos and magnificent yew topiary dating from the 1920s.

This 900 year old castle nestles at the foot of the South Downs, north of Arundel in the South Downs National Park.  It is an impressive landscape with so much to do, from a short walk around Amberley village to a full day’s excursion taking in some of the best views in the south of England.  The town of Arundel, a mere 15 minutes away by car is home to Arundel Castle and Cathedral as well as having a multitude of boutique and antique shops.  The Regency City of Brighton and Hove, with John Nash’s magnificent Royal Pavilion, is close enough for a day trip with plenty to see en route.  In addition, the Sussex area is well served with many stunning stately homes and National Trust properties and gardens.

If this is all too much, then one can just enjoy the lovely grounds and gardens or challenge one’s partner to a gentle game of crochet (if there is such a thing!) or tennis and if this does not suffice then there is the professional standard 18 hole putting golf course which is set within the extensive grounds amongst impressive water cascades feeding two lakes and affording superb views to the South Downs.  The course was created to commemorate the castle’s 900th anniversary in 2003.  It is one of only two such courses in England designed by the noted golf course designers and architects, Weller Design.

At the end of the exhausting day one’s room becomes a haven of tranquillity.  Our room for the evening was the Arundel Suite which is classed as Premier Deluxe with its leaded medieval windows and open fire place but with a very stylish modern bathroom suite.  There are 19 bedrooms to chose from, ranging from Classic to Premier Deluxe, with four poster beds, leaded windows, panelled walls or mighty beams befitting a castle’s interior, each luxurious and individually designed to suit all needs and preferences.

Needles to say the experience of spending an evening in such an important historic castle, gazing out onto the lawns below and looking out over the rolling Sussex countryside is both romantic and magical.

Of course this is only part of the total experience of staying at Amberley Castle.  The other important element is how good is the chef?  Well in this case there is no need to worry as the whole dining experience is wonderful including an intriguing pudding which we had to try as the ingredients were not what one would expect in a pudding.   As a consequence I can whole heartedly recommend the purple carrot soufflé with orange and cardamom sorbet – a culinary masterpiece! 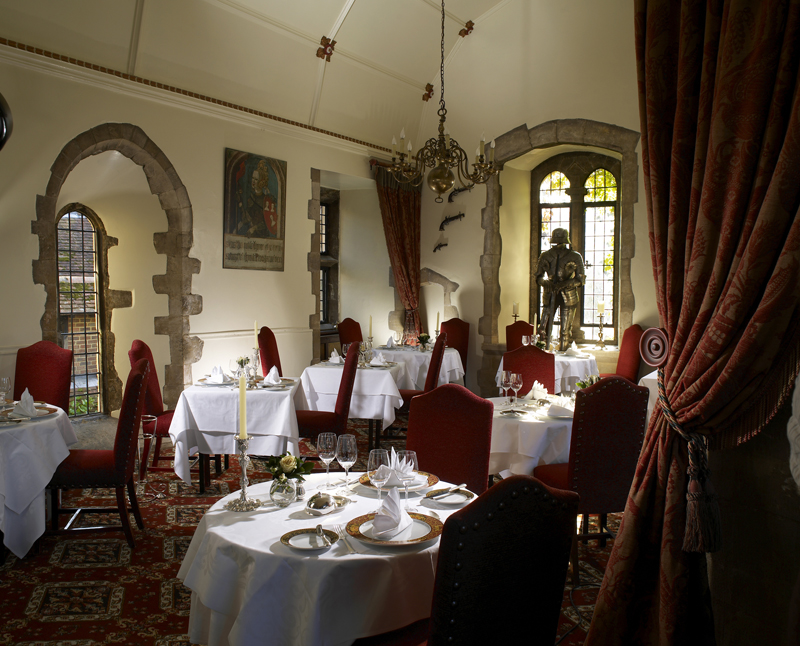 The magnificent Queen’s Room is the principle dining room with a barrel-vaulted ceiling dating back to the 12th century.  An open fire lights the room during the winter months but was certainly not required when we dined there as it was a perfect summer’s evening.  An alternative dining room, named The Great Room, built in 1165 by Bishop Luffa of Chichester is a fine example of Norman architecture with its high lancet windows, open fireplace, oak flooring, tapestry and suits of armour.  Which ever dining room is chosen the ambiance is a perfect setting for the delights of the meal to come.  The Head Chef, Rob Jenks and his team have achieved recognition and accolades for delivering outstanding cuisine at Amberley Castle.

One solution to the difficult task of making a choice from the menu is to book a one night package to include a seven course tasting menu, the sommelier’s choice of wine and full English or continental breakfast the following morning. 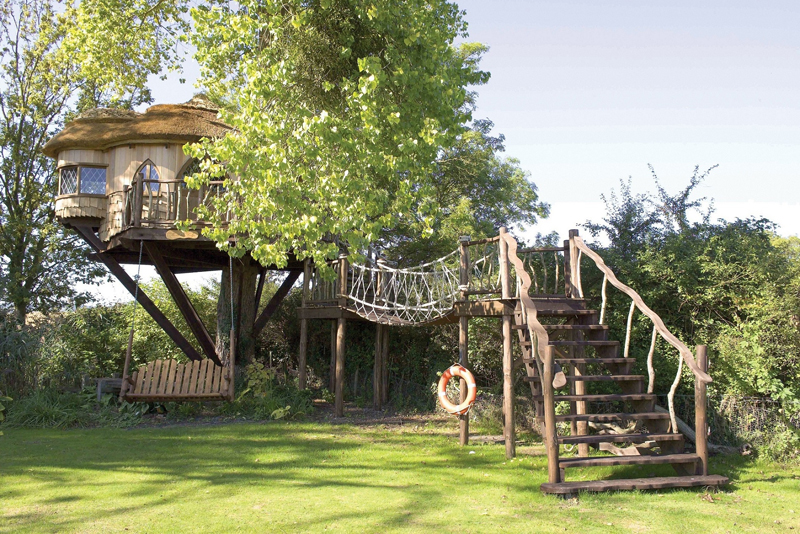 And finally, for the incurably romantic, Amberley Castle has Mistletoe Lodge.  This stunning building nestled amongst and upon the beautiful poplar trees by the Castle’s main entrance is an architectural wonder.

Mistletoe Lodge is a magical thatched tree house reached only by a rope bridge and walkway, affording unrivalled views of the 900 year-old Sussex castle and its lakes with its wildlife.  It can be hired for lunches, dinner and wedding ceremonies.

For further information, or to make your reservation, please call 01798 831992 or email info@amberleycastle.co.uk

To view their brochure:- 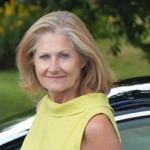