This was done in association with Abercrombie & Kent, with funding provided by the English Tourist Board, and British Airways, who jointly financed  an annual trip to the USA in January, for us to do a tour of all the major American cities, including Boston,  New York, Washington, Dallas, Miami, San Francisco, Los Angeles, Chicago where we invited all the best travel agents in each city, and did presentations to them.

What made this unique was that we researched and created historical itineraries to ‘link’ all the hotels together, so that American tourists could follow whichever itinerary they liked best, and stay at all the participating hotels, including Chewton Glen.

The idea was that Debrett’s would research and provide the historical itineraries, and the  exclusive Travel Agent, Abercrombie & Kent, would handle all the logistics.

The person we selected to do the job was a very young, and little-known Dr. David Starkey, then lecturing at the LSE.  This programme was a big success, and  it worked very well as a means of encouraging overseas tourists to visit these specific hotels, and provided the basis for many future similar marketing efforts, of which  Chewton Glen was a prime beneficiary. 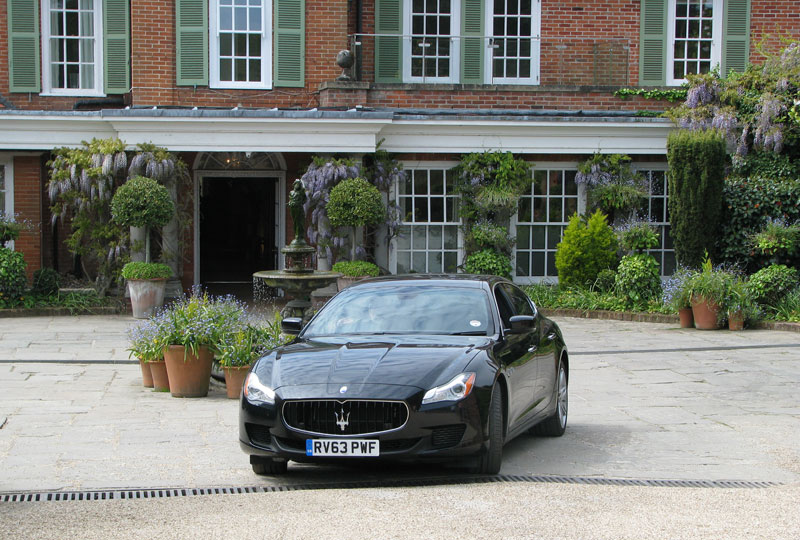 So, it was very much a case of ‘déjà-vu’ when we recently went to stay at Chewton Glen and experience its special brand of hospitality, and the high standard of its cutting-edge cuisine.

Dining at Chewton Glen is run by Executive Chef, Luke Matthews who has just celebrated twenty-one years at the hotel and has quite rightly earned this elevation.

He is responsible for forty staff and control of a huge budget out of which he must procure the finest ingredients to maintain the high standards and reputation that Chewton Glen has  achieved over the years, Condé Nast rating it as one of the best hotels in the world.  Chewton Glen is truly amongst exulted company.

Chewton Glen has grown considerably since the 1980s and I was interested to see how well they have extended what was originally a country house on the edge of the New Forest, only a mile from the sea.  There is a vast array of rooms and suites to chose from, each individually designed and decorated.

We stayed in the Masterman Ready Suite which was beautifully decorated with a balance of modern fabrics with antique touches and a particularly enjoyable feature, especially on a lovely sunny day, is the large terrace balcony with sun loungers with views overlooking the grounds.

On a more practical level, I was particularly impressed with the bathroom, not only was it well designed but was well lit, which is not always the case in hotels.  Many bathrooms can look good but when it comes to the practicality of applying make-up the lighting leaves a lot to be desired.  So it was a real pleasure that this bathroom passed my wife’s test with full marks.

Apart from the accommodation within the hotel there is also a choice of three tree houses which must be the ultimate romantic experience. 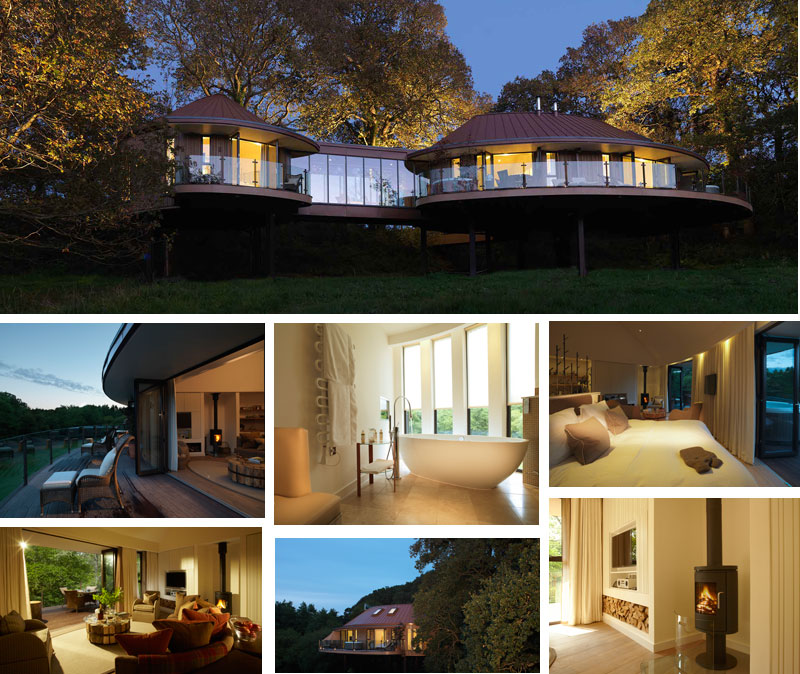 So wonderful rooms, superb food and of course what any fine hotel worth its salt will have  nowadays, the obligatory Spa.

Chewton Glen’s Spa has probably the finest pool and water treatment room I have encountered and it seems others would agree as it has been awarded Conde Nast’s , ‘Best UK Spa 2014’.

I must not forget the fabulous Croquet Lawn, which my wife and I played on whilst we were staying there,  which ‘frames’ the buildings perfectly.

As I mentioned Chewton Glen has been a top hotel for over thirty years and has been the training ground for some of the most successful hoteliers in the UK today.

Most notably are Robin Hutson and Gerard Bassett.  Robin had been Chewton Glen’s restaurant manager and Gerard, the sommelier.  They founded Hotel du Vin in Winchester in 1994 and it  was an immediate hit with its refreshingly modern approach to inner city hotels.

The staff were well-trained and well-dressed with French bistro aprons; the food was bistro style with menus changing with the availability of ingredients and most importantly the wine list was good value.

They had entrusted the important role of Head Chef to a very young James Martin who had also worked at Chewton Glen.  It was his innovative menu planning and use of freshly sourced local ingredients which was a breath of fresh air to the local cognoscenti who embraced this new restaurant with relish.  Needless to say Hotel du Vin went from strength to strength, opening another nine hotels across the UK until they sold to the Malmaison Group, ten years later.

This was not the end of Robin and Gerard’s hotel careers, they have both moved on to other ventures.  For Gerard it is Hotel Terra Vina on the eastern edge of the New Forest and his continuing elevation in the world of wine, having been named the World’s Best Sommelier in 2012.

Robin did not rest on his laurels either. He went on to become Chairman of Soho House group and oversaw its expansion globally, also the creation of the Limewood Hotel at  Lyndhurst in the New Forest, a popular hotel with stars of stage and screen.  In his own right, he has started a hotel group called ‘Home-Grown’ hotels, each including the word ‘Pig’ in them.

As for the young chef, James Martin, it was not long before he was lured to TV in those early days of cookery programmes.  His television career was launched with Ready Steady Cook and he was offered the now phenomenally successful position of presenting Saturday Morning Kitchen.

The whole point of this short diversion being that these three were all trained at Chewton Glen and it is to that hotel and its high standards that one has to give some of the credit that the UK now has some of the finest hotels in the world.

Chewton Glen is now owned by the publicity-shy Livingstone brothers, Ian and Richard, who also own the lease on Cliveden, the stately home made famous by the Profumo Affair.

I should mention here that we drove to Chewton Glen in the new Maserati Quattroporte, which is just about the best way of transporting  four adults, in style and comfort  and at speed, that I can imagine, and it definitely held its own against the Jaguars and Aston Martins which sprinkled the car park.

Almost exactly a year ago, we drove the Maserati Grand Cabrio sport, which was, at that time, one of the most impressive cars we had driven, and so it was with great anticipation that we waited for the opportunity of driving the new Quattroporte GTS, and we were not disappointed. 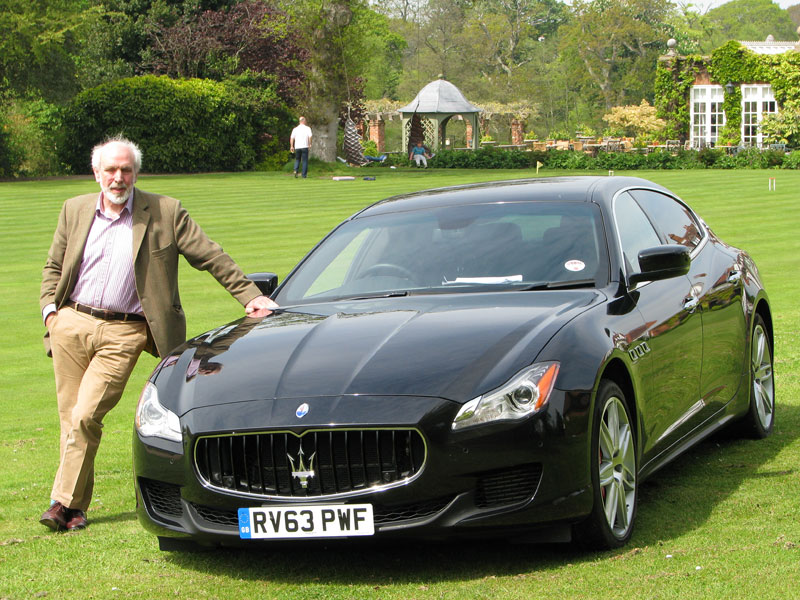 We photographed it beside their immaculate Croquet Lawn, and in front of the main entrance, and it looked very much at home there, with both car and hotel representing the best of their kind.

The Maserati Quattroporte comes in two versions.  We had the 3.8V8 GTS which costs around £110,000 new.  The extended wheelbase gives it ample rear space, and the styling is aesthetically pleasing; not an easy thing to achieve when trying to make a four seater as stylish as a two-seater.

The interior boasts full-leather upholstery, which extends to the dash and beyond, and includes al the latest gimmickry including an 8.4 inch touch screen interface with a rear-view camera – this is one modern aid which I have found gets some getting used to and to trust but so many top quality cars have this in-built extra that we will have to persevere with it.

The driving position is comfortable with well bolstered seats, whilst the rear-seat passengers have plenty of room all round. The large boot has a refreshing 520 litres of luggage space. 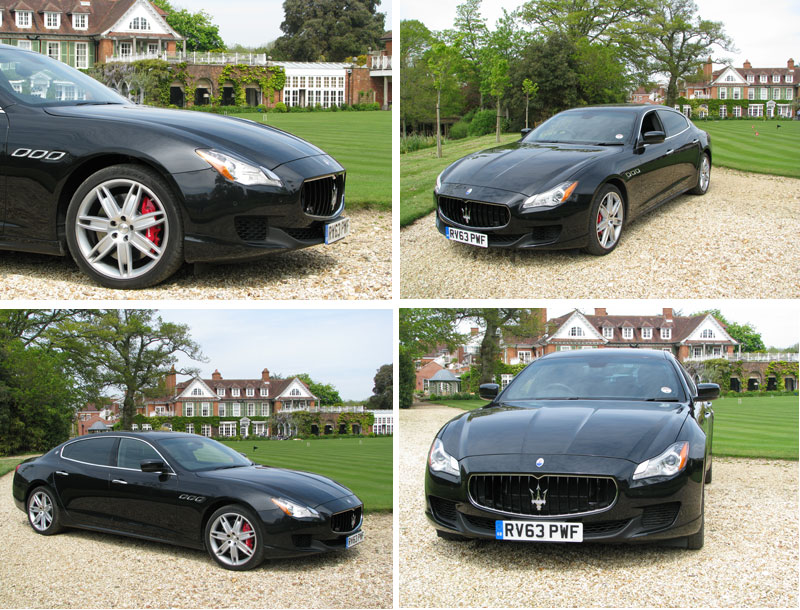 For those of you who are technically-minded, the engine is a twin-turbo, variable-valve, direct-injection engines built by Ferrari at Maranello to Maserati designs.

The GTS does 0-62mph in 4.7sec with a maximum 191mph making it the fastest production saloon on the planet. All I can say is that it is extremely fast! 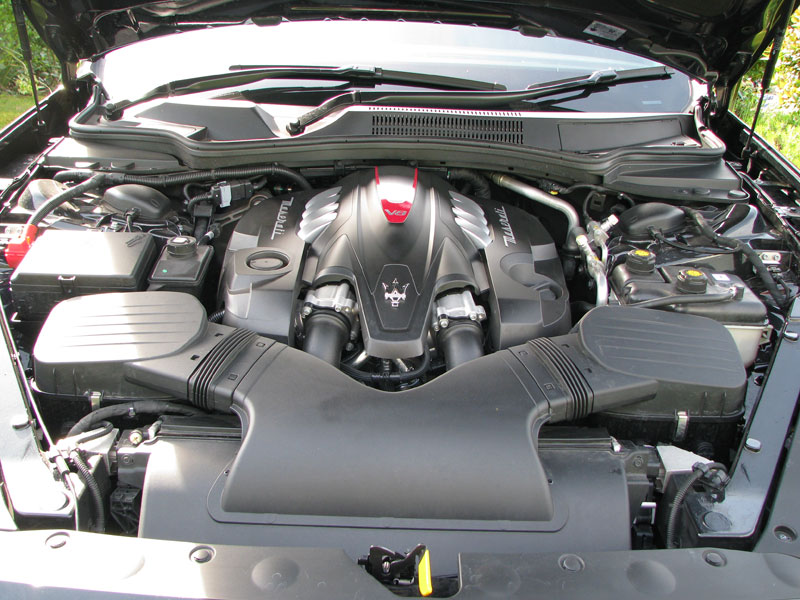 We absolutely loved the Quattroporte, and believe that Maserati are on to a real Winner with this model, which although not cheap to buy, offers fantastic levels of Performance, Style and Speed. 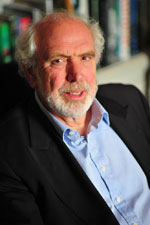 Robert Jarman, Founder and Editor of The Vintage Magazine and Maserati enthusiast.