The Vintage Magazine travel correspondent Paul Thomas is a former Fleet Street journalist and founded and ran what became a major consumer and tourism PR company in the 1980s and 1990s.  Today, taking it a little easier to enjoy vintage lifestyle, he is a member of the British Guild of Travel Writers, aids charities and also runs a film-making company, www.wideangles.tv

Paul Thomas visits this unique, for some, eccentric time-warped country and asks if its time for a change.  Cuba, a communist land of vintage characteristics, prize cigars, rum, 1950s cars and music, music, music, is facing a classic challenge – change may be on the way.

Go to Cuba and you will wrestle with your love or loathing of much of what it is.  From political control and its financial impact on its local but loyal people, most poorly paid – to a new industry aiding growth – tourism. Cuba seems out of touch with time, occasionally frustratingly late and disorganised – but adding value with heart-felt commentary by and about local life.

Inevitably you will stay in large, government-backed chain hotels, be they in the capital Havana or in the regions, east or west.  The latest “tourist attraction” is ‘All Inclusive’ terms (though you’re expected to tip, sometimes without justification).  These terms include everything, as much as you want of food, drinks, entertainment.  That can be dangerous if you aren’t strong willed – particularly on the booze!  But not too much of it is vintage…

Certainly this step is drawing custom – much of it from Canada, the UK, South America and Europe.  Three million visitors are targeted a year and hotels are building all the time.

With an infamous past, some Cuban people search to be unlocked. You sense they seek a future of freedom, democracy, commercial development, even capitalism – inevitable as many who visit it, believe must be. Yet if it changed to “just another Caribbean state”, unfettered with its people able to roam the world, would it lose much of its charm and tourist appeal – now its greatest income earner?

Cuba is the Caribbean’s largest island, about 850 miles long but less than 70 miles wide for much of that distance with white-sand beaches, lush valleys, mountains and famous cities.

The capital is Havana with nearly 1,000 historic buildings, many in need of restoration among squares and streets of homes for its population of three of the country’s ten million people.

You must go local – into the countryside, some rural, much barely inhabited and here you find the spread of character, and inequality arising from the communist regime.  Earnings are eccentric, apparent taxation far from clear and in many cases possibly nil or unpaid, albeit from very low earnings.

Most locals get around by horse and cart, hitching lifts – or walking.  Modern transport is rare. Education is free and children spend half their day learning and half working.  Many develop excellent brains, taught by professors of the Cuban way (and some will admit that is “brain-washing”) who are confined to Cuba, as are most people. These brains will also be found driving taxis, working bars, to build extra income enabling them to bid for a passport, inevitably to take them to, for example, Venezuela, a major partner for various reasons, plus other South American states. But times are changing, inhabitants rent accommodation, good or humble, from the government and after about ten years they have ownership – and then may even sell their homes for profit.

You may tour by coach, taxi, or be driven in the numerous beautiful, plus some tatty, 1950s American cars, most now re-engined with modern diesels from Japan, Germany, many producers but not American! 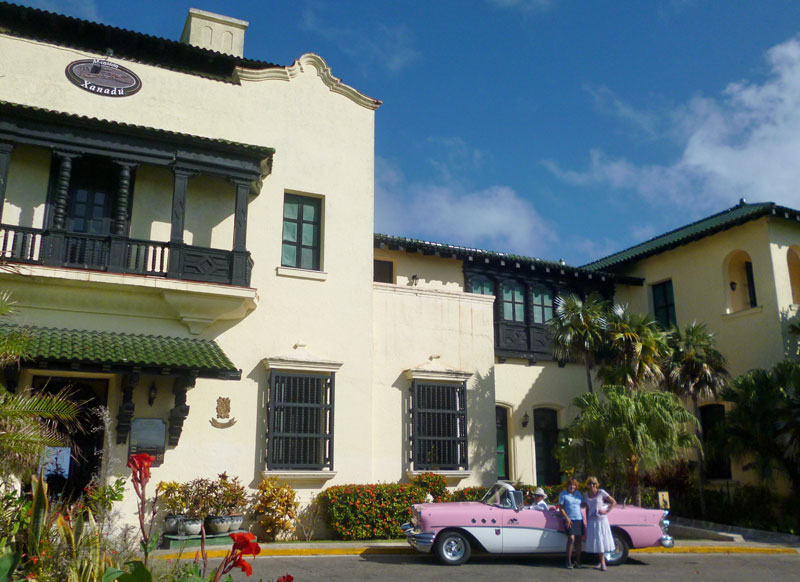 Then you can go by horse and trap; enjoy a short steam ride behind a century-old classic loco, and speed across Everglades waterways and lakes to witness crocodiles, plus an original home of Cuba’s earliest origins. Reach this selection of destinations through towns and cities with third-world back-streets – but people reckon you are safer than in numerous other international countries financially so much better off.

Inevitably your tour guide will be learned, deep in Cuban history – but sometimes rebellious in their reflection of today’s life and changes that they believe may happen in years to come, possible when the Castros die.

While we were there a Latin American summit took place with President Raul Castro and Venezuelan chiefs hosting South American countries to explore the future for a rival United Nations style organisation.  We saw live TV shots of several of the presidents visiting Fidel Castro, now 87, privately – looking frail but said to be alert and informed.  Few people know exactly where he lives. 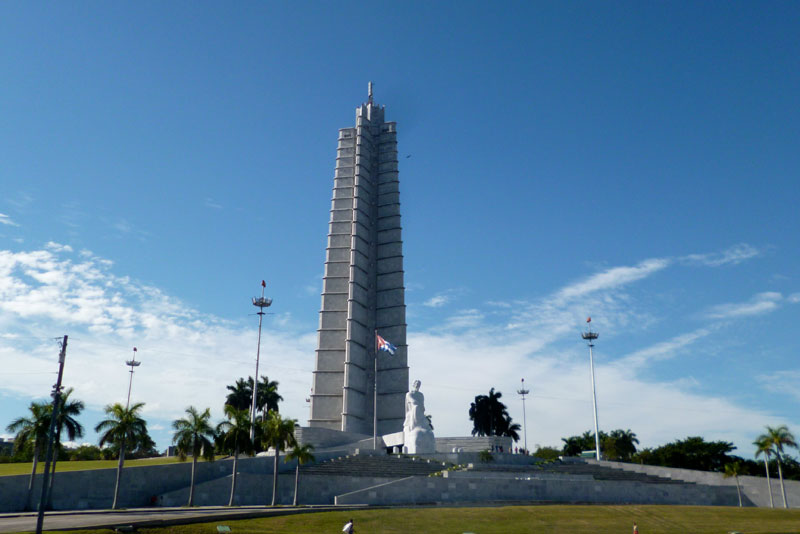 Your visit to Havana must include Revolution Square, just one reminder of a past littered with controversy – from its origins in the hands of the Taino people, circa 500BC, to “discovery” by Christopher Columbus in 1492, imported slaves, ownership by Spain, then England which then traded it back to Spain in exchange for Florida in the 1760s. Onwards to the War of Independence when the US invaded Cuba in 1895, eventual independence from America in 1902 and a period of largely corrupt government while US business dominated Cuba’s sugar-based economy.

Then came its perhaps most controversial days with Fidel Castro seizing power in the 1950s, Soviet Union backing from 1959, more turmoil, the collapse of the Soviet Union, and major hardship it brought Cuba in 1991, easing in the mid 90s, albeit with ongoing communist control, the embargo with the US – and now today’s ongoing quandary? 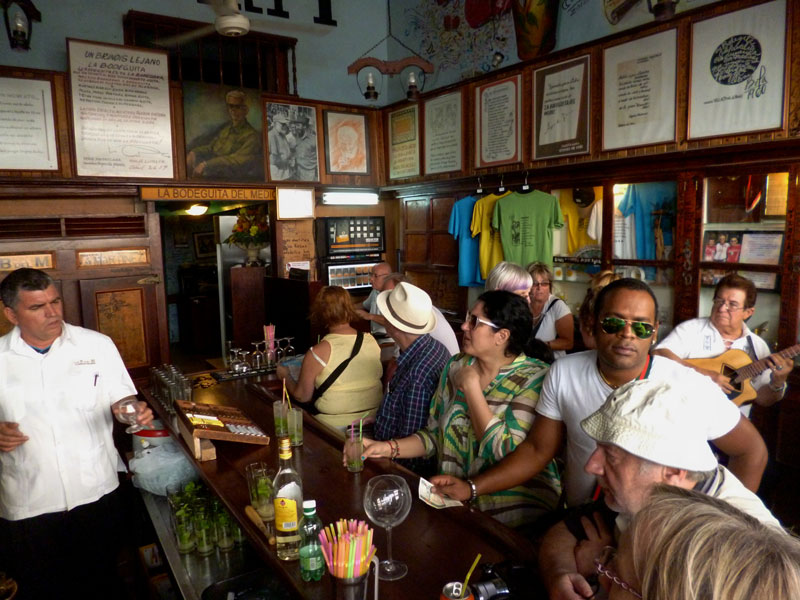 Enjoy a few Mohitas at the Hemingway Haunt

Cuba has had numerous colourful visitors – among them the immortal writer Ernest Hemingway who lived here for 20 years; plus US crook Al Capone who during American prohibition, hid alcohol in a small bar in Varadero, one of today’s tourist centres. Errol Flynn, Sinatra, Nat King Cole, the Beatles and other stars visited Cuba. 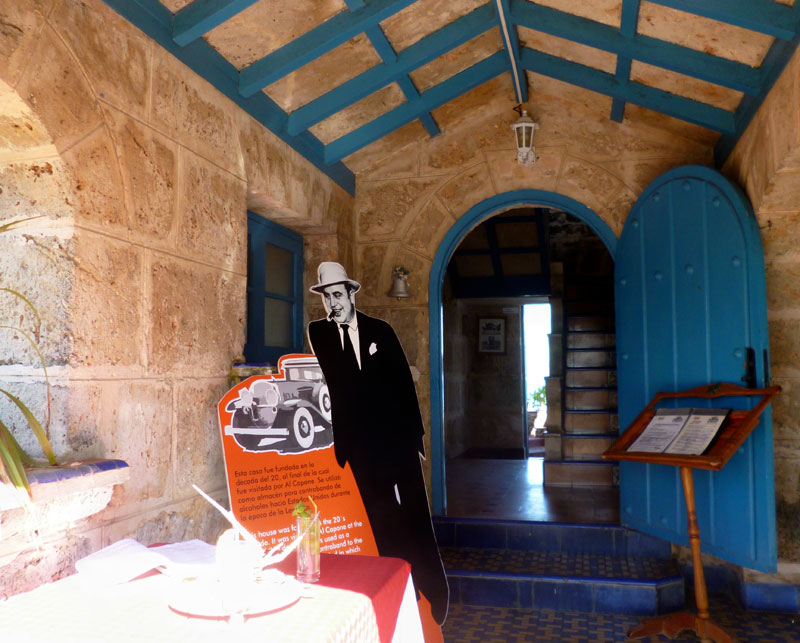 Today’s hotels provide superb entertainment, from piano bars to top acts – we applauded a Michael Jackson Tribute performance, incredible reality created by a young Cuban and his team.  But it is in Cuban music – and salsa, dancing – that its brilliance flies.  You can learn it – on the beach or in hotels.

Perhaps our greatest night was at Xanadu, an iconic hotel and restaurant created by Dupont in the 1920s and now a star in resort Varadero.  There was also a fabulous  concert with the world famous Afro-Cuban Allstars at the Buena Vista Social Club. 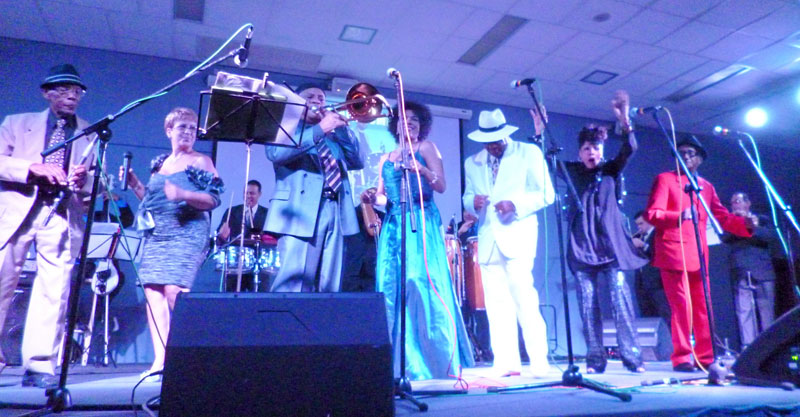 The Band – Young and Old

Here you meet, mix with, even dance with great musicians and singers in their 60s, even 70s, perhaps 80s, their sound, songs and happiness scintillate.  An ace couple, young, dance as no one could – then tempt us to join them.  My minutes with the dazzling Cuban brunette on Guantanamera are memorable – and her partner swings, twirls, even hoists my wife way above Strictly standards!   Such an evening draws 500 tourists. 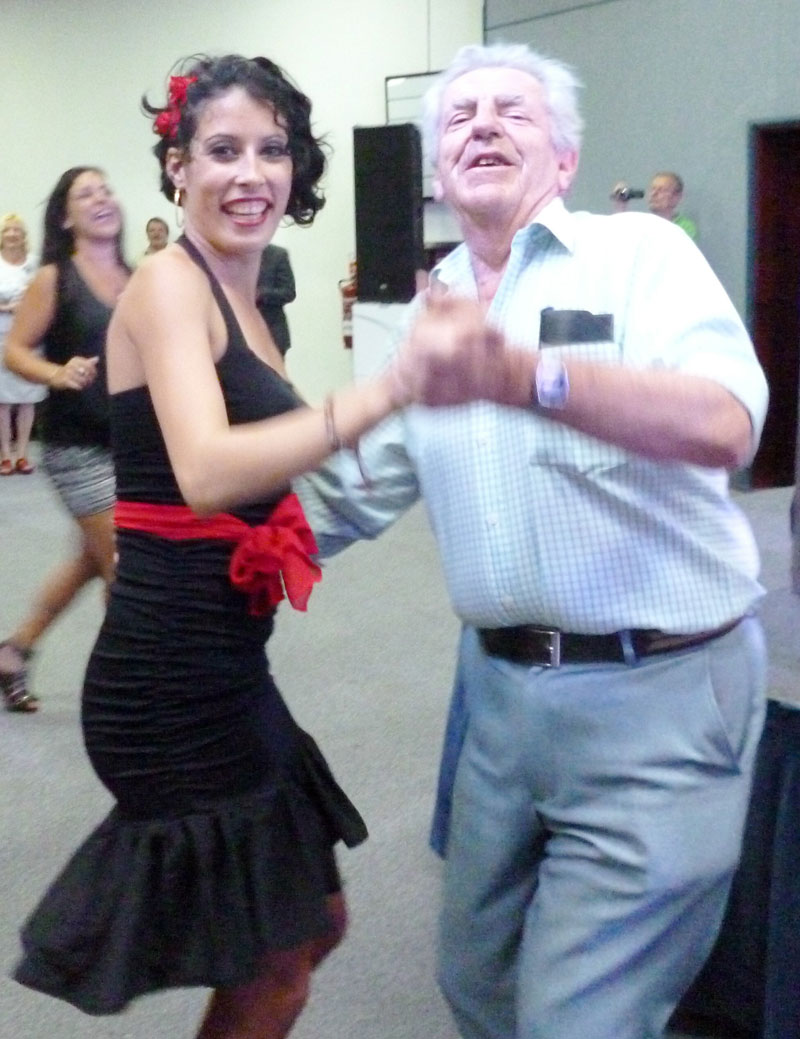 The Author, Paul Thomas, with his Dazzling Cuban Dance Partner at Guantanamera

In hotels and clubs Britons will be surprised that there are no limitations on where or when you may smoke, cigarettes or cigars.  The temptation, of course is great – and perhaps the King of all is the Cuban cigar, vintage smoking established again by many of life’s past greats, Winston Churchill included.

Your best holiday will comprise a few days in Havana, visiting historic sites, enjoying evening spectaculars like the magic Tropicana extravaganza, plus other smaller but equally thrilling night clubs.

And then you will head for a sea resort, such as Varadero where numerous nations pack into hotels with pools, entertainment and catering, wide in choice, plentiful in quantity, albeit at times questionable in quality.

Inevitably tours will show you rum and tobacco factories.  Havana rum is legend – and the best cigar producers may bar you from photographing their expert staff, blending, twisting and compacting long-seasoned tobacco leaves into cigars commanding huge prices the world over. 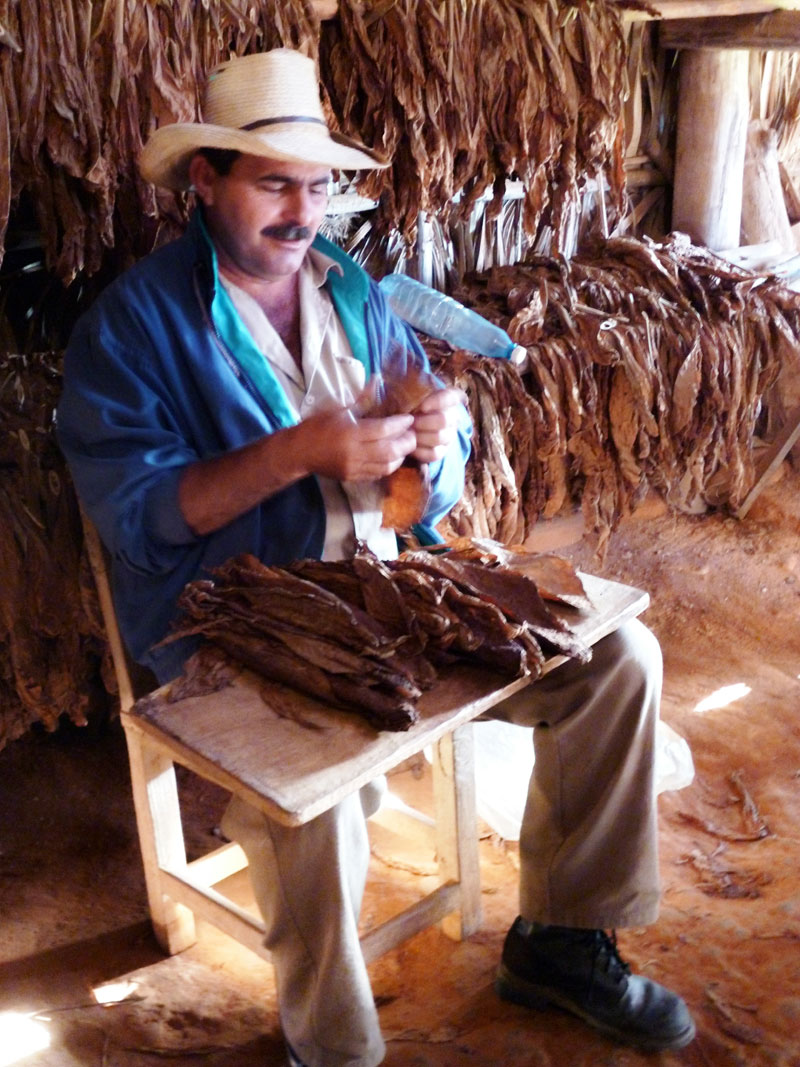 Small farmers create cigars too and we were charmed by one who showed us, and lit up tourists with his own rolled Havanas, produced on his small-holding.

But it is the local people who really light up this land, many in tourism who work tirelessly for guests.  Drivers, waitresses, musicians – most working for pittances that shock visitors – provoking tips for the best, inevitably with your sympathy.

There were even a couple with whom we built friendship – but also a humbling relationship arising from their wish to please us.  That heartfelt friendship was endorsed by them steadfastly refusing a tip when we parted to head home, instead pressing us genuinely to return.

This is a truly different country.  Whether it should, or can change, is a quandary.  Its charm, uniqueness, suggests no new revolutions for Cuba. Perhaps just peaceful, positive, progress……

Information:  One of Cuba’s biggest tour operators is The Holiday Place in London, www.theholidayplace.co.uk   Their local reps ensure good service.     .

We flew Virgin Atlantic, London Gatwick direct to Havana, other airlines service Cuba via international stops like Paris and Madrid from London and elsewhere in the UK.

We stayed at Melia’s Havana and Marina Varadero hotels.  This chain is building more new properties, offering a wide range of standard and upmarket accommodation.

Local tours are a must and ask full details before you book – communication isn’t Cuba’s greatest skill!  1950s classic cars vary from immaculate to tatty.  Barter with local driver/owners and we enjoyed a Buick convertible in the sun with Lazaro Diaz.

Prices for 7/14 days start from £800+ and can include fully-inclusive terms. 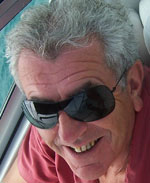 Paul Thomas is a former National newspaper journalist and still spends considerable time writing, including travel.  He also ran his own Public Relations company for 30 years, specialising in Travel, Airline and Hospitality accounts.

He is a member of the British Guild of Travel Writers, and serves on its committee handling business development.